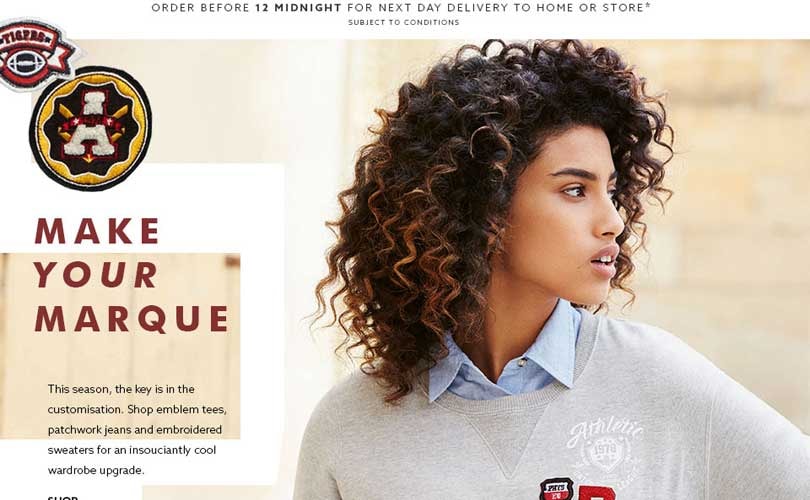 In March, Next had predicted a challenging year, which it says has been reflected in the first half results. Although total Next Brand sales were up 3 percent ahead of last year, full price sales were down 0.3 percent on a comparable week basis. Directory performed significantly better than retail as a result of improved stock availability, enhanced website functionality and continued growth from Label and overseas.

Profit before tax was down 1.5 percent but underlying EPS was up 0.8 percent, boosted by the effect of share buybacks. The company has announced an ordinary interim dividend of 53p per share, in line with last year.

Detailed review of the first half trading

The company expects retail net margins for the full year to be around 15 percent and plans to increase net trading space by 350,000 sq. ft. this year, more than forecasted in March. Store numbers will remain broadly the same, with the increase from new stores being offset by the closure of smaller, less profitable stores. Profitability of the portfolio of stores opened or extended in the last 12 months is forecast to be 22 percent of VAT inclusive sales and payback on the net capital invested is expected to be 22 months.

For the full year, the company expects Label total sales to be up 12 percent with full price sales up 14 percent. Net margin is expected to improve to 16 percent largely as a result of a reduced markdown. In the first half of this year Next added nine new major brands and will add a further six in the second half.

General inflation (CPI) is forecast to increase in the year ahead as the effects of the Pound’s devaluation filter through to the real economy, so the company feels that there is a risk of a squeeze on real earnings if wage growth remains at its current level. Total earnings continued to grow at around 4 percent throughout 2015 driven by growth in total employment, although this has slowed to 2 percent in the first quarter of this year. Up until October/November 2015, total retail sales were growing broadly in line with consumer spending, with clothing and footwear doing significantly better.

Towards the end of last year, and coinciding with an unusually warm winter and cold spring, growth in sales of clothing and footwear fell below the general level of retail spending.

“We reiterate our guidance that the third quarter is likely to be our toughest, as it was our best performing quarter last year. There is a possibility that the trend away from spending on clothing and footwear might not be as marked later in the year, as the comparative numbers soften in November. This improvement is very likely if we have a cold winter. For the full year, we expect Next Brand full price sales growth to be between decline of 2.5 percent and rise of 2.5 percent. Our wider than normal sales range reflects the continued uncertainty and increasing volatility of consumer demand,” said Lord Wolfson of Aspley Guise, Chief Executive of the company.