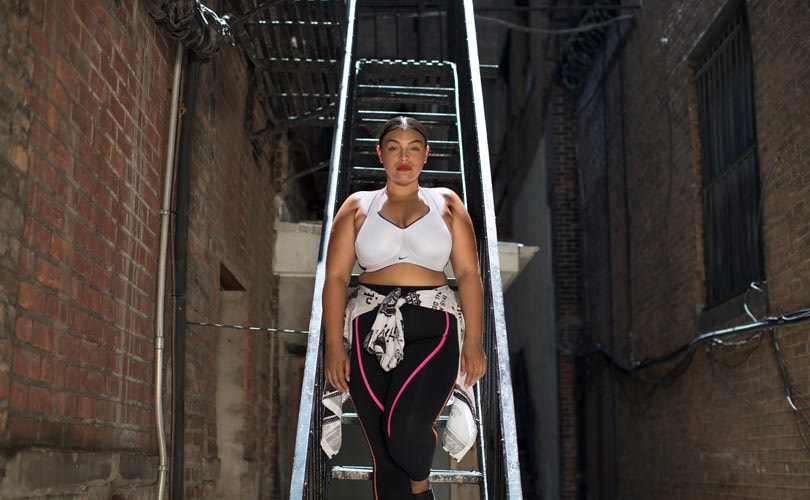 The idea behind starting this piece on plus-fashion or in modern terms “curvy” with a quote on plus-sized women was to bring back the plus fashion moments that created headlines in 2017….starting with the city of Paris formally launching a campaign against ‘grossophobia’, or fat shaming, more stores launching plus size collections, designer collaborations between major brands such as JCPenney, Target, New York & Company with celebrities such as Tracee Ellis Ross, Victoria Beckham and Eva Mendes that all offered plus sizes; bloggers launching their own plus-size clothing lines; plus size models standing up to their bullies; New York Fashion Week sending more plus size models down the runway and one of America’s biggest fashion-focused TV shows, Project Runway, including plus size models in their edition. All these events raised an extra-large toast to the future of plus size fashion in the year 2018 and years to come. 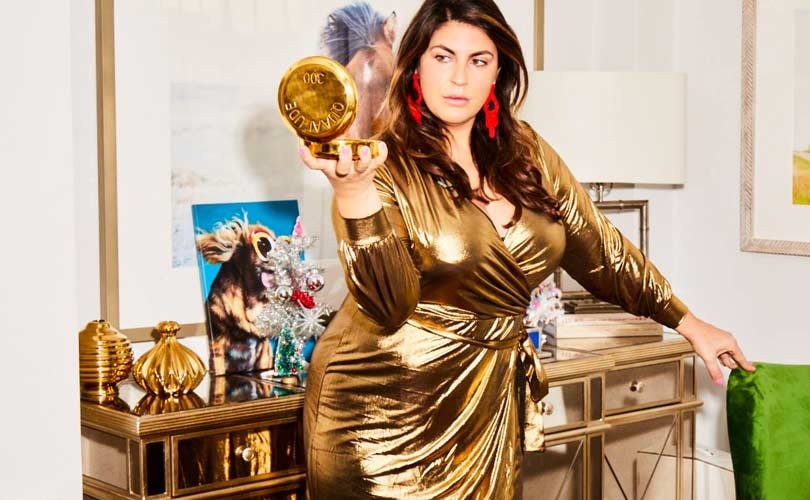 If we were to look at the plus-fashion market in terms of numbers, a 2016 study in the International Journal of Fashion Design, Technology and Education states that the average American woman is now between sizes 16 and 18. While according to NPD Group plus size (US size 14 and up) was a 21.4 billion dollars business last year, compared to 17.4 billion dollars in 2013. Plus-size teens are a driving force, accounting for 34 percent of the market in 2015 compared to 19 percent in 2012, according to NPD’s 2015 Women’s Special Sizes Study.

At the other side of the ocean, in the UK, growing obesity in young people is said to fuel the 5.08 billion pounds plus size market in the country, a market, which is set to continue growing according to data from research and consulting firm GlobalData. Also, the NHS’s Health Survey of England found that 26.8 percent of women in the UK were either obese or morbidly obese in 2015, with obesity among 16 to 24 year olds increasing from 12.9 percent in 2014 to 15.9 percent in 2015.

A report "What Britain Wears: Niche Clothing 2017" indicates that one in every five pounds spent on womenswear in 2017 was spent on plus-size garments.

Despite these surveys and research statistics proving a lucrative opportunity for fashion retailers, not many brands have come forward to cater to this niche segment. However, in today’s Internet era, social media tools like Instagram, Twitter and Facebook are proving a platform for plus size women to express their desire for clothing that fit their body types and show how good they look no matter their size. As a result many online fashion retailers, designers, fashion bloggers and even sports labels are taking a note of this growing segment. 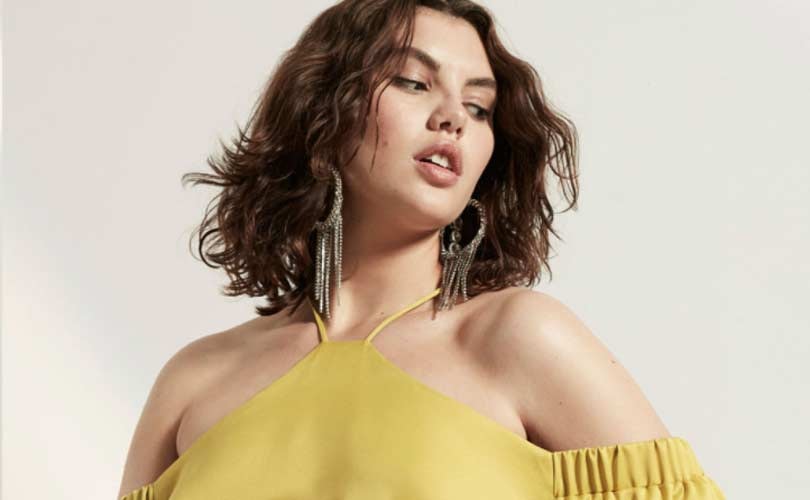 While customers have always complained about brick-and-mortar retailers not paying attention to their needs providing them with only a small array of plus size clothing, online players have managed to please these customers with a dedicated collection and wide choice. Physical retailers argue that the reason behind not stocking plus size fashion in-store is that it’s not viable to provide sufficient space in-store vis-à-vis sales generated by the segment. Also the plus size segment is considered a high-risk one because retailers find it difficult to assess what these customers will buy. Additionally, retailers state that making larger clothes requires higher investment and lower margins, which are not being passed onto consumers.

Online retailers like Asos, Missguided, Mango and Boohoo.com feature a wide range of options for curvy women. Online has been highlighted as the most important channel for plus size shoppers, as 45 percent of female shoppers buy their plus size fashion online via a retailer's website or with an online pure player, according to the report. This is why UK fashion retailers who have been investing in new plus size ranges, wider choice and improved accessibility online, are said to have helped boost plus side expenditure by close to 800 million pounds since 2012.

“With improved availability and choice, plus size shoppers are better catered for than ever before,” states Kate Ormrod, Lead Retail Analyst at GlobalData. “The overall investment in ranges has brought them up to par with core womenswear propositions in terms of regular newness and fashionability, and is helping to drive up purchase frequency and therefore spend.”

“We’re seeing small, independent brands be much more successful in this market than larger brands and retailers. The small, new, innovative players are generally beating out the big behemoths that are sort of stuck in the old way of doing fashion retail,” says Marshal Cohen, a retail-industry analyst with NPD Group to the Wall Street Journal. He highlights how startups are focusing on this niche segment to generate sales offering exclusive designs and styles specifically meant for the plus size consumer and even bespoke outfits created on demand to fit the their specific measurements.

Brands and designers turn to plus fashion

A few high-street retailers such as River Island, M&S, Quiz and New Look stock an entire collection of plus size options for women. By 2020, revenue in the category could hit 24 billion dollars, says NPD, however Ascena Retail, parent of popular plus size apparel chain Lane Bryant states that "true opportunity" in the market may be as much as 53 billion dollars, depending on how it's measured, says a report by CBS News.

Walmart announced plans to acquire ModCloth in March and designers including Michael Kors and Christian Siriano roped in models of different body types on their fall runways, while H&M’s buy-now-wear-now collections featured shapely models Kate Syme and Stella Duval. Designer Prabal Gurung, whose clients include Oprah Winfrey among others, also announced a limited collection for Lane Bryant. And Nike started selling its 1x through 3x plus-size collection on its website.

Also a number of companies like Hanesbrands, J.C. Penney Co. and Ascena Retail Group Inc.’s Lane Bryant are expanding larger-size lines. In March this year, PVH acquired online lingerie supplier True & Co. that has also 56 percent of its sales coming from plus sizes. The company also had plans to add more sizes to its Warner’s and Olga brands. Most recently, New York & Company acquired plus-size brand Fashion to Figure.

Still, industry experts think that many companies have been slow to catch on the demand created by the plus fashion market despite models like Ashley Graham making headlines through her Instagram account as well as covers of glossy magazines.

Lingerie is another such segment of the fashion industry that often struggles to cater to the plus size women. “One of the fastest-expanding segments is lingerie. This area has been traditionally underserved,” IBISWorld analyst Madeline Hurley told Bloomberg. For instance, Chastity Garner Valentine, a size-22 fashion blogger cannot locate a source that can fulfil her desire to wear attractive undergarments. Bloomberg quoted her saying, “It makes you feel like you don’t belong and don’t have a place.” The 36-year-old launched a successful social-media campaign in 2014 pushing Target Corp to add larger sizes in its designer collections.

Serving the plus size customer is not an easy job. As Suzette Walters, J.C. Penny’s vice president of intimate apparel and women’s accessories tells Bloomberg, “Unlike pants or dresses, which can be scaled up using the same template, new bra sizes need to be specially designed and engineered, with special fabric, wires, hooks, straps and more. In fact, there are some 37 components in all. It’s not easy to get it all right, especially for full-figure variants that have to provide enough lift and also be comfortable.”

However, JCPenney has introduced bigger sizes in its lingerie label Ambrielle and Boutique +. Brands like Calvin Klein and specialty retailers such as Brayola have also launched brassieres in sizes 40DD and beyond. According to research by Hanesbrands, 35 percent of women are plus size by age 25, and 44 percent by age 33, so the brand has launched a new line called Maidenform Curvy for younger women and its new Playtex Love My Curves bras come in cup sizes up to a G. It’s part of a new push by clothiers to appeal to full-figured women in the US, where the average dress size is between 16 and 18, according to trend-forecasting company WGSN.

Revenue in the plus-size category increased by 14 percent between 2013 and 2016, compared to plus 7 percent for all apparel. Social media, surely played a key role in changing the perception and the way plus size customers have been looked at so far.

Will 2018 further stress upon ‘big is beautiful’?

According to a report by McKinsey & Co., the number of mentions of "plus size" in the fashion press tripled in 2016 compared with the year before and the trend shows no signs of slowing down. The fashion retailers, offline as well as online are taking a note of ‘big is beautiful’ by extending their collections to accommodate the plus size customers, a demographic that so far remained ignored.

"Fashion brands are rapidly responding to a cultural shift toward body positivity and a growing appreciation of curvy figures, by designing specifically for a larger range of sizes rather than just expanding their size range as an afterthought," the report said.

Men have grown, so must the plus-size menswear market