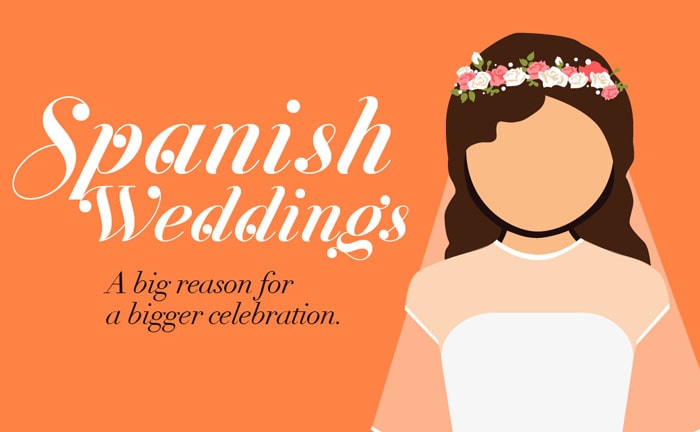 Spain - The wedding destination choice of brides across the globe

Aside from the strength of Spain as producer and exporter of wedding gowns, weddings in this country are also a huge celebration that include not only with family and friends but sometimes entire villages. On top of that Spain is a chosen wedding destination for couples flying in from all over the world, making this country part of weddings across the globe.

No time to read the whole article? Click here for the 20-second version. 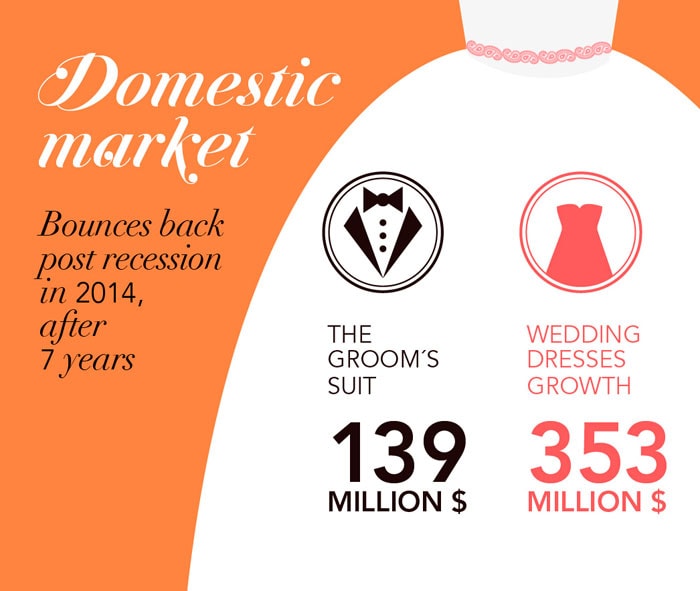 In 2014 the overall budget on weddings in Spain increased by 31 percent to 18,503 dollars (16,500 euros). The rise marks a return to optimism of newlyweds and their beliefs in greater financial stability, in addition to recovering traditions and the uniqueness of a luxurious experience, says the IESE Business School report. 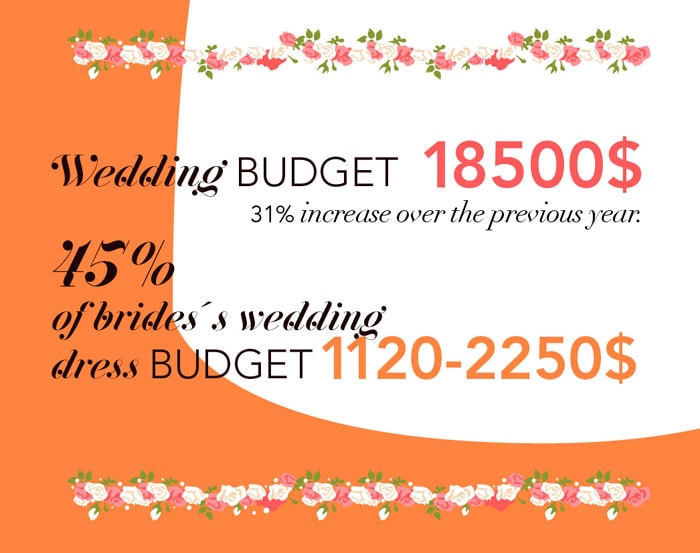 Spanish weddings – A big reason for a bigger celebration

Opulent traditional weddings continue to be popular. Most Spanish weddings start after 7 p.m. and don’t end until the next morning, when all guests except the bride and groom have left the party venue. Although Spanish law allows foreigners to marry in Spain, in reality usually one of the couple has been legally resident in Spain for at least two years.

From the traditional lace mantilla or a ‘velo nupcial’ (wedding veil, which is usually very long and can trail several feet behind the bride’s ‘traje de novia’ (wedding gown), 13 coins known as arras (unity coins) that represent Jesus and his 12 apostles, which are blessed by the priest and given to the bride with the groom's promise to care for and support his wife, the ‘alianza’ (wedding ring) which is worn on the ring finger of the right hand to loud firecrackers and rice or flower petals, typical Spanish weddings end with the ‘banquete de bodas or convite’ (wedding reception), wherein the bride and groom hand over ‘small detalles’ (wedding favours) like cigars, dessert wine miniatures or hand-painted fans etc, to each guest. Spanish brides traditionally wore black, silk wedding dresses, symbolising their devotion to the death. In recent years this tradition has changed with brides opting for white wedding dresses. The groom usually wears a dark suit and a shirt that is specially embroidered for the occasion by his bride.

Unlike other western-style weddings, Spanish or Catalan brides and grooms do not have groomsmen, ushers, bridesmaids or flower girls and there are no speeches either. The couple’s godparents ( ‘padrinos’ ) play an important role in the wedding. However, one of the best man’s duties in Spain is to buy the bride’s wedding bouquet, and present it to her on the morning of the wedding with a handwritten poem. Another popular feature of the Spanish weddings is Classical Spanish Guitar music played during the reception.

Not only are weddings in Spain a big celebration, the Spanish market for wedding gowns is among the three leading production hubs: China, the United States and Spain. Spain is also the second-largest exporter of wedding gowns after China. Experts indicate that despite political uncertainty in this country, Spanish bridal sector continues to be one of the strongest markets globally.

Spain is the largest production hub of bridal wear in Europe. As per the latest available figures, since 2014, the total production of bridal wear in Spain is worth 1.4 billion dollars (1.3 billion euros), which consists of domestic turnover of around 845 million dollars (754 million euros) and exports of 568 million dollars (507 million euros). Exports contribute 40.7 percent to this total figure. Following an annual growth rate of 12.9 percent, total bridal-related shipments, including wedding and special occasion dresses, men’s wear and accessories from the country, tripled to one billion dollars or 876 million euros, in value from 2007 to the year 2014. There are about 700 companies actively working in the bridal sector employing over 6,000 workers. Within Spain, Catalonia is an important hub since it covers over 41 percent of the total production.

In 2015, the strongest export markets for Spanish bridal-wear and related segments were Italy (17.3 percent), France (15.3 percent) and Germany (13.2 percent). Followed by Portugal (6.3 percent) and the UK (4.8 percent). Apart from these major markets, last year's figures show a significant growth in exports to countries such as China-Hong Kong, which increased over 30 percent, Ireland (+15.6 percent) and the Czech Republic (+9 percent).

Latin America and Asia are emerging as focus areas for export since they are growing markets for the Spanish wedding wear industry. According to Estermaria Laruccia, Director of Barcelona Bridal Fashion Week, these regions will lead the growth of bridal fashion in the coming decades due to its large population and expanding middle classes.

Speaking at the opening ceremony of the Barcelona Bridal Fashion Week in April, Jordi Baiget, Minister of Business and Knowledge of Catalonia, said that exports of Catalan bridal fashion companies totalled 315.19 million dollars (278.44 million euros) last year, representing an increase of 3 percent over the previous year and +78.5 percent compared to 2010.

BBFW 2016 - Grows its repute as an international show

Barcelona Bridal Fashion Week (BBFW) concluded its 26th edition with a greater presence of the big Spanish and international prêt-à-couture brands, exhibitors, trade visitors and key buyers, ratified its status as one of the world's bridal fashion hubs and business centre. The event played host to 260 exhibitors, 13 percent up on 2015, of which 58 percent were international (eight more than the previous year). Over 650 key buyers attended the event – more than double the number in 2015 – from some 40 countries, primarily the USA, Germany, the United Kingdom, France and Italy, all of which are regarded as key countries this year in the show's internationalisation strategy, along with the countries of Scandinavia, Latin America and Eastern Europe.

Spain is a chosen wedding destination of many international couples. Destination weddings have emerged as a strong trend among modern couples and Spain appears on top of a lot of courting couples’ wish lists. Experts attribute this to the reliable weather, swanky hotels, exotic locations and budget-friendly prices Spain has to offer. Globally, this tourist destination moves 11.2 billion dollars (10 billion euros) in destination weddings and 8.9 billion dollars (8 billion euros) in spending by wedding attendees in lodging. It is expected that in 2016 Barcelona will generate 60.1 million dollars or 53.6 million euros in bridal tourism. 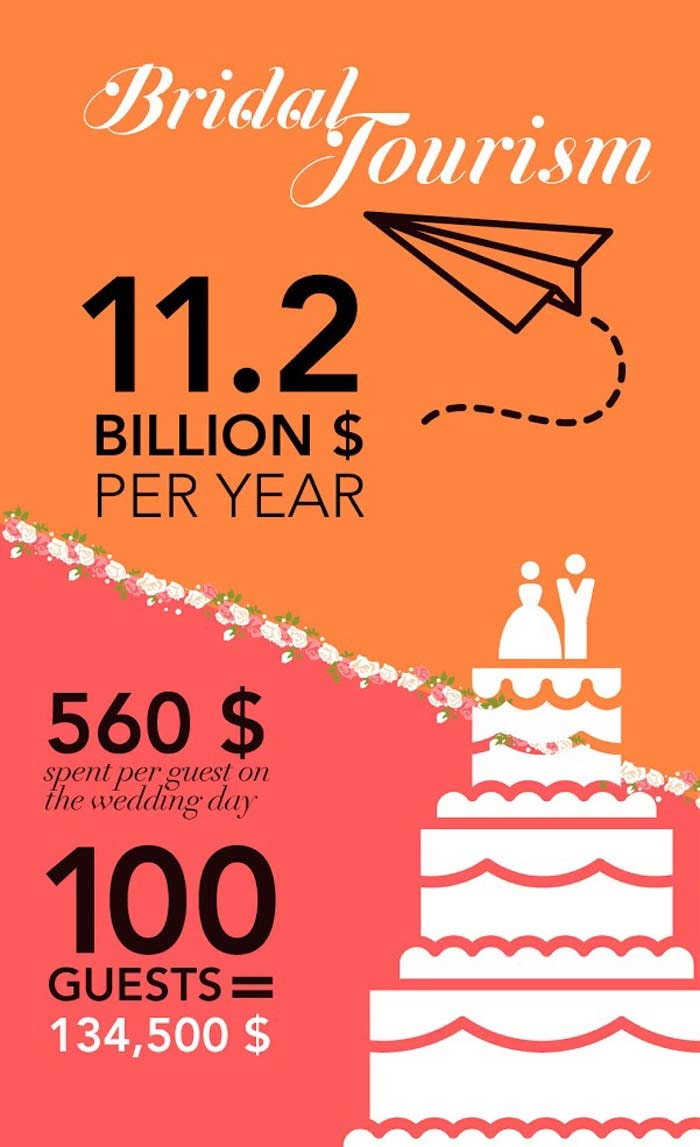 The customer profile, the IESE study says, is foreigners (mostly British) with high purchasing power who want to celebrate the ceremony outside their country so as to offer their friends and family a different experience. On the wedding day alone, average spending per guest exceeds 560 dollars (500 euros) and the economic impact of a wedding with 100 guests would stand at around 134,538 dollars (120,000 euros).

Experts note that with legalised gay marriage and touted to be the LGBT fun capital of Europe, Spain’s wedding scene is quite diverse. So the wedding business in Spain will continue to be a booming proposition - whether exports, gay or straight wedding in the country, church marriage or at the registry office and on the beach or banqueting suite…