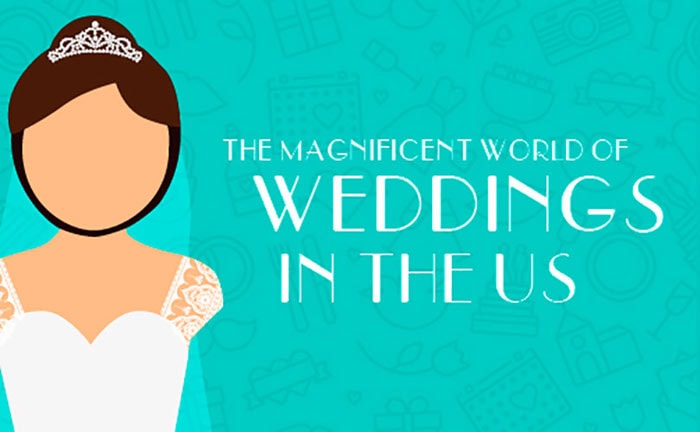 The magnificent world of weddings in the US

Every year, almost 2.4 million couples marry in the United States and splurge almost 60 billion dollars to say till death do us part. ‘The Knot 2015 Real Weddings’ study found that weddings continue to be one of the most important and most expensive events in couples' lives. Questioning nearly 20,000 US brides and grooms married in 2015 ‘The Knot’ found that in the period 2010-2015 the average wedding costs in the United States increased by more than 5,500 dollars.

No time to read the whole article? Click here for the 20-second version. 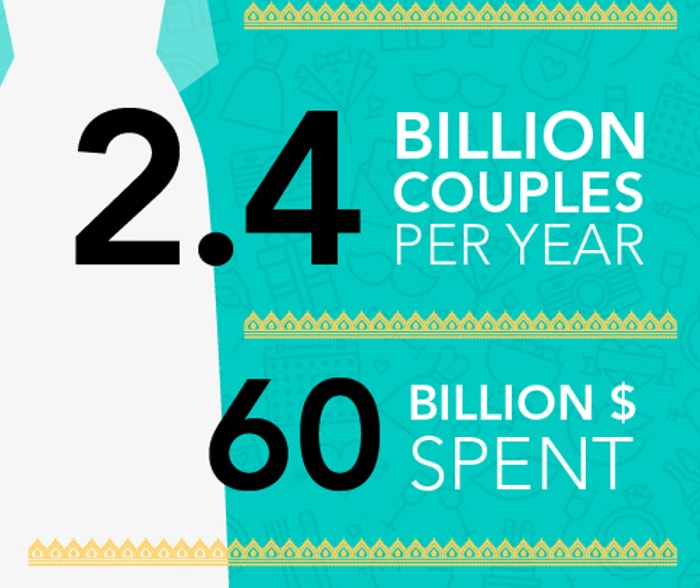 According to the IESE study ‘Millennial Brides. Born in the 1980s, getting married today’ the US is also the third largest manufacturer of wedding dresses world wide. The United States produces over 1.8 million wedding dresses a year and its annual turnover of from dresses alone is almost 2.8 billion dollars. 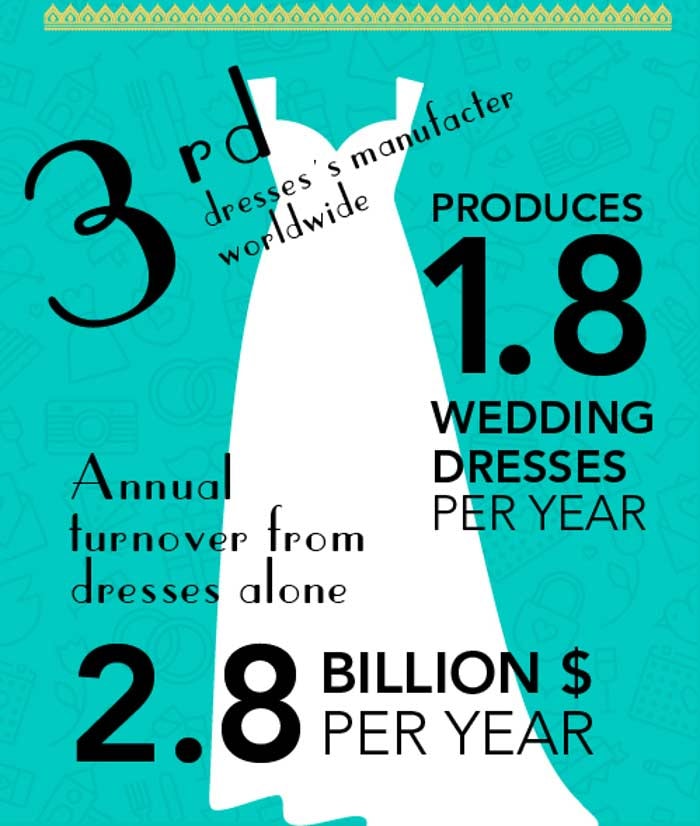 Blending the old with the new

Many American couples continue to follow the saying “Something old, something new, something borrowed, something blue, and a silver sixpence inside your shoe”. The saying that goes way back to the Victorian era requires the bride to design her entire look to promote good luck in life after marriage. An American bride will usually wear piece of ‘old’ family jewelry, a new wedding gown or wedding ring, something borrowed from a happily married acquaintance, blue flowers or a blue garter and a silver sixpence inside her shoe.

Preownedweddingdresses.com shares some interesting insights on its blog. Only 6 percent of brides would like to wear their mom’s wedding gown for their own big day and 23 percent of today’s brides say that they would definitely sell their own dress. Not only are brides willing to sell their wedding dresses but almost 42 percent are ready to grab pre-owned gowns so that they can wear a designer dress for less. The study says that with the average savings on a used wedding dress at 58 percent, they can make a serious savings for their budget wedding.

Most US brides wear white bridal dresses accompanied with a veil. They attend bridal showers before their wedding, which are usually organised by the chosen maid of honor. Bridal showers are said to have originated in Holland for brides who were refused dowry by their fathers, so she would receive several gifts to marry the man of her choice.

The American wedding ceremony has bridesmaids and groomsmen. Today, ‘giving the bride away’ means that the bride's father accompanies her on her walk down the aisle. The married couple's first kiss, the wedding kiss, today is considered one of the highlights of the ceremony. The history of wedding cakes indicates that it originated as a way to ensure fertility and throwing rice is to bring luck to the newlyweds. The newly married bride also throws her bouquet to the unmarried women at the wedding party and sometimes she throws her garter to the single men.

The average US wedding will cost 33,000 dollars. The numbers are a bit skewed by the cities of New York and Los Angeles, where wedding costs are much higher. David Wood, President of the Connecticut-based Association of Bridal Consultants: “You can have an elaborate wedding in the Midwest for 10,000 dollars but in New York City a wedding doesn’t get started for less than 50,000 dollars.” Manhattan is the most expensive place to get married in New York city as well as the US, boasting an average price tag of 82,000 dollars. In comparison getting married in Alaska is much cheaper with an average of 17.000 dollars. 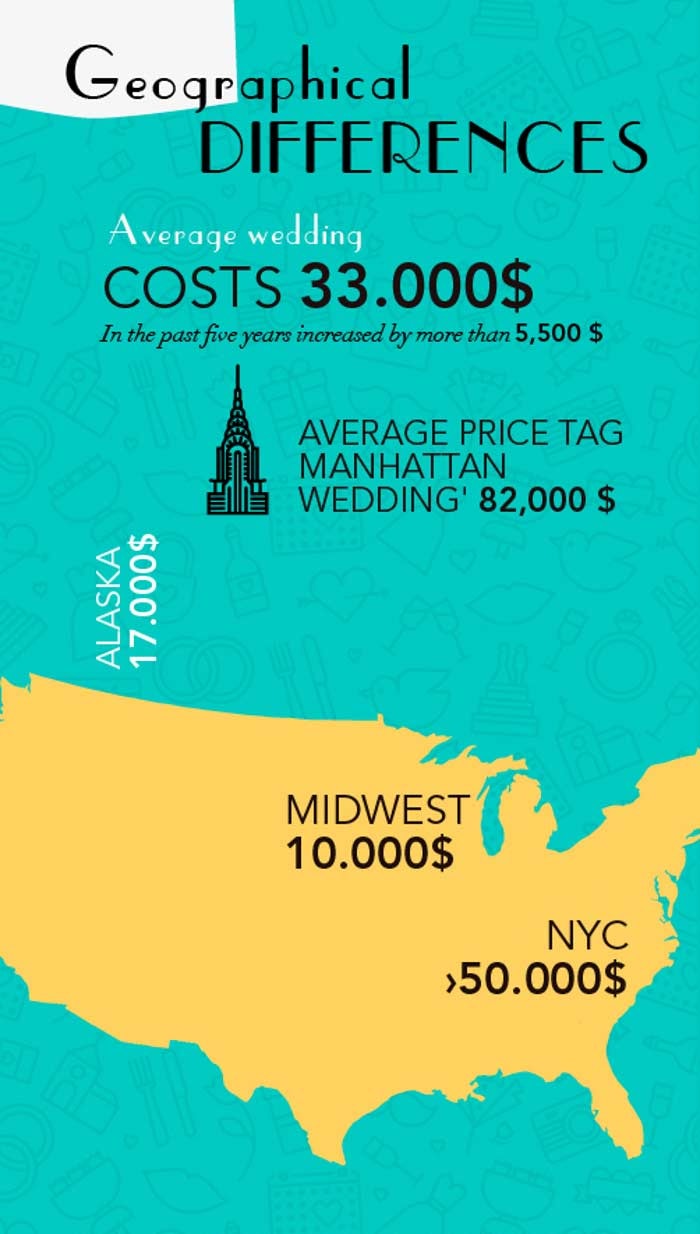 David Wood says many today’s US couples have unrealistic expectations and feel pressured to make their wedding unique and spend accordingly so that they can flaunt pictures on Facebook or Instagram. Pictures of the bride’s dress, flowers and decorations, party and honeymoon are willingly shared on social media.

More and more American couples are blending traditions outside of their own backgrounds so that their weddings can be unique and different. ‘The Knot’ survey found that couples are incorporating special events into their celebration, ranging from bilingual music and Celtic hand tying to Chinese tea ceremonies. Since 2009 custom guest entertainment including including cigar rolling stations, wine and liquor tastings, and live dance performers and couples offering signature cocktails has more than tripled. 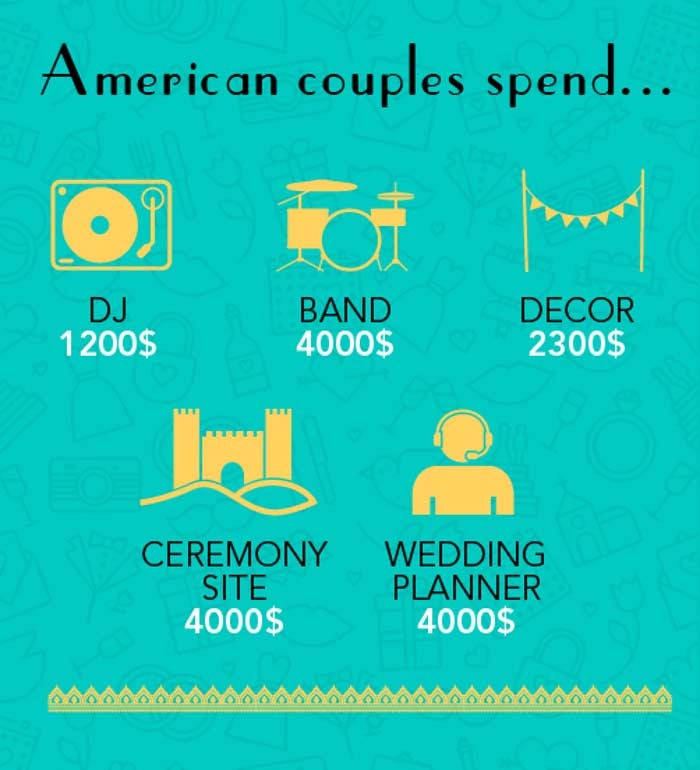 Couples are spending more and more on their big day. Not only on outfit and location but on their guests as well. The cost per wedding guest increased from 194 dollars in 2009 to 237 dollars in 2015. Whereas the number of guests per wedding has gone down. Spending is on the rise when it comes to all reception categories like catering, wedding cake, music, flowers, photography and entertainment. In 2015 American couples spent 1,200 dollars on average on a DJ; 4,000 dollars on a reception band and catering cost per guest amounted to 68 dollars. Wedding event decor cost 2,300 dollars; the ceremony site 2,100 dollars and a wedding planner 2,000 dollars. And brides spend around 1,500 dollars on their dress. 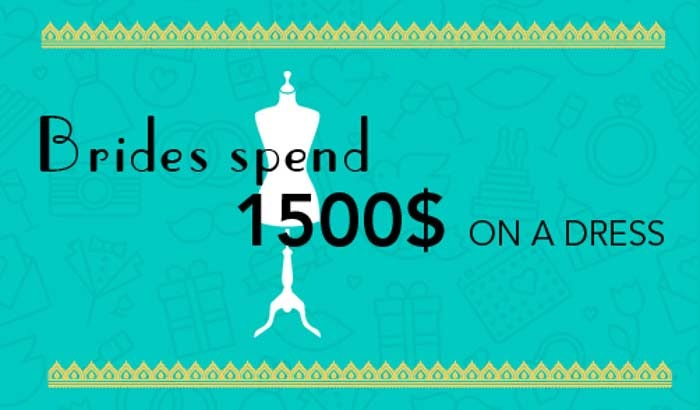 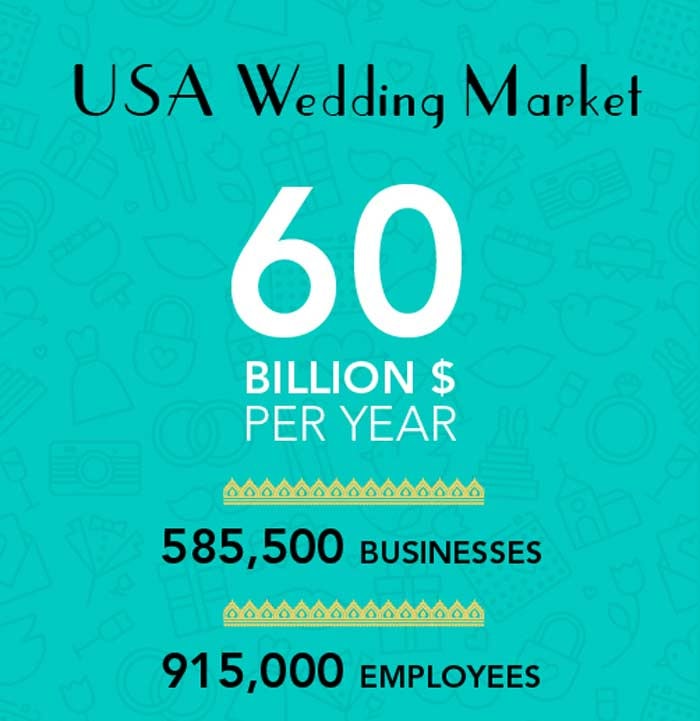 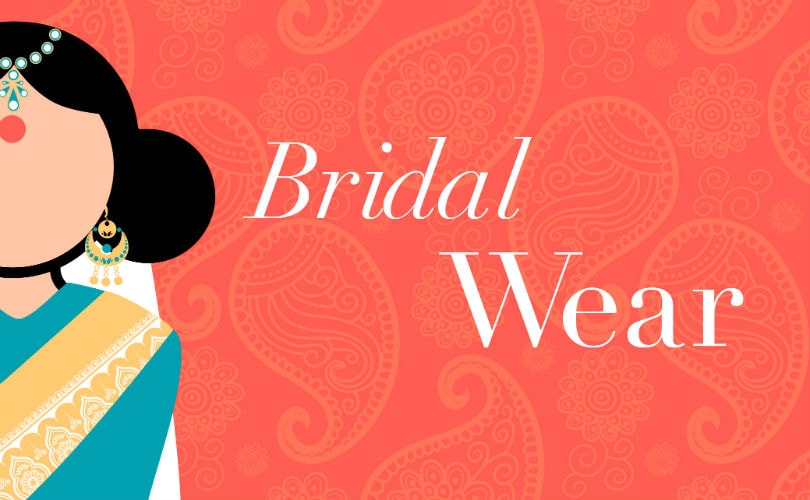