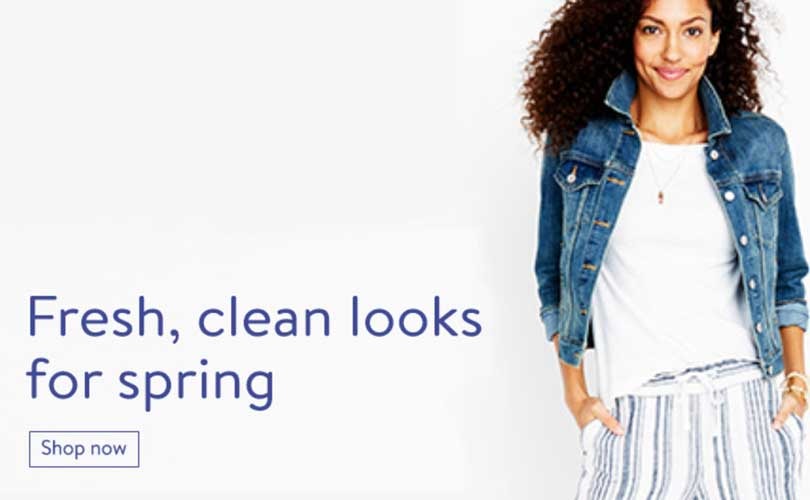 Walmart vs. Amazon - the fashion battle is on

Walmart is playing catch with its online nemesis with the most ambitious clothing launch in years: four new lines for women, men and children with items from priced from 5 to 30 dollars per item. Walmart says the move comes in response to its customers’ desire for more fashionable ranges.

“She wants understandable fashion,” said Deanah Baker, senior vice president of apparel for Walmart’s U.S. division. “She wants to look smart and stylish. She doesn’t need to walk down the runway.” As a response, Walmart will be selling skinny jeans, ruffled clothes and bohemian looks at affordable prices, competing against Amazon and Target, which also have taken their fashion stakes up a notch.

The four new labelscater for the entire family:

Despite the interest arising among consumers and fashion experts, Walmart Inc.’s battle with Amazon.com Inc. is testing the patience of investors: this race is hitting its bottom line like never before. Walmart’s push to expand online operations and cut prices contributed to a record-low operating margin last quarter, according to data compiled by Bloomberg. The profit measure narrowed to 3.3 percent, sparkling concerns.

E-commerce investments pose the largest loom for shareholders, especially as those efforts show signs of diminished returns, point out market experts. Walmart’s online sales grew at less than half the pace last quarter as in the previous three months, recalls ‘Invesotrs.com’. “A long-term question becomes, what kind of operating margin can Walmart ultimately sustain?” Michael Lasser, a UBS Group AG analyst, said in a note.

"There's a real big debate about who will win out between Amazon and Walmart," said Tim Barrett, a retailing consultant at Euromonitor. "It does seem like Amazon has more momentum but it also seems like it would be easier for Walmart to expand its online business than for Amazon to expand its presence in physical stores." "Both will be going through growing pains," added Barrett.

Shares plunged 10 percent in late February after Walmart reported fourth-quarter earnings that missed expectations and revealed some struggles in its online shopping business. E-commerce sales rose 23 percent in the quarter on a year-on-year basis.

Commenting the results, Walmart CEO McMillon said in the company's earnings conference call that "A smaller portion of the slowdown was unexpected, as we experienced some operational challenges that negatively impacted growth". He cited operational issues "from an inventory replenishment perspective.” Now, management at Walmart expects online shopping sales to rise 40 percent this year – still 4 percent below last year’s comparable growth (44 percent to 11.5 billion dollars.)

This month, Walmart stock was upgraded to a buy from neutral at Goldman Sachs, which added the stock to its "conviction" list and said the retailer is "still very much in control of its own destiny." But the Goldman Sachs report said the competitive threat from Amazon "remains significant."

From a revenue perspective, Walmart is much larger than Amazon. In 2017, Walmart’s revenues almost tripled Amazon’s and reaching the 500 billion dollars mark for the first time. That size enables Walmart to put a much bigger price squeeze on suppliers than Amazon in online shopping, Barrett says.

Amazon is undergoing a major expansion into apparel, with several of its own private labels. Earlier this month, Amazon announced the launch of two premium, private-label denim brands. As a result, analysts at Cowen & Co. expect Amazon to pass Macy’s as the largest U.S. clothing seller, growing its market share in the country almost three fold by 2021.

Meanwhile, Walmart’s clothing and home goods are on the rise, accounting for 9 percent of its overall sales in the year that ended in January 2017, according to a Securities and Exchange Commission filing, reports ‘Investors.com’.

Walmart compounded the concerns by delivering a disappointing earnings forecast for the coming fiscal year -- and then saying it would no longer offer quarterly profit projections. That sent its shares on their worst tailspin since 2015 on Tuesday. The stock plunged as much as 10 percent to 94.35 dollars.

"There's a real big debate about who will win out between Amazon (AMZN) and Walmart (WMT)," sums up the market’s expectancy Tim Barrett, a retailing consultant at Euromonitor. "It does seem like Amazon has more momentum but it also seems like it would be easier for Walmart to expand its online business than for Amazon to expand its presence in physical stores."