Fashion brands’ answer to the dropping trust in influencer marketing

Influencer marketing is bound to become more transparent. At least that’s what most marketers and consumers believe, according to a survey with 1,173 marketing specialists and 500 adults aged 18-34 in the UK and US. Conducted online by Influencer Intelligence in association with Econsultancy, the survey lays out the state of influencer marketing today and trends for the future.

Consumers are getting more and more suspicious about the product recommendations they see on social media, with 66 percent of surveyed shoppers stating they can’t tell the difference between influencer content and plain advertising. However, social media continues to be effective in swaying consumers’ opinions, as no less than 61 percent of consumers said they have been convinced by an influencer to purchase a product. Despite such impressive numbers, most marketers still allocate a small amount of their budgets to influencer marketing: 53 percent of industry respondents said they spend less than 10 percent of their total marketing budget on influencers. Why is that? The vast majority (83 percent) said they need better data and metrics to prove the return on investment (ROI). Their methods to find influencers to work with are not cost-effective, either: 54 percent of respondents said they still search for social media stars manually.

Although a third of surveyed marketers have admitted to not disclosing their influencer partnerships (thus misleading Internet users to believe the recommendation was spontaneous), they too admit there needs to be more transparency in the industry as there is a blurry line between organic content and advertising (65 percent). They also gree that governing bodies such as the FTC and ASA will need to take a zero tolerance approach to code breaches moving forward. Turns out brands don’t have to be scared social media users will ignore the posts if influencers admit they were paid for it: 54 percent of surveyed consumers said disclosure hashtags such as #ad and #spon do not take away from the influencer’s credibility. They do, however, drive them away from the brand or product if they think the pairing is not a good match. “For brands who have failed to profile their influencer carefully, #ad can be extremely damaging”, Emma Usher, Company Director of talent booking agency RunRagged Media, is quoted as saying in Econsultancy’s report.

The future of influencer marketing: transparency, micro-influencers and in-house talent

How do respondent marketers deal with these trust and transparency issues? Some of them are prioritizing micro-influencers, those with less than 100,000 followers. They are believed to be more cost-effective by the majority of industry surveyors. “With celebrity or top-tier talent collaborations, you’re renting their audience for a single post, but for the same price, you could take the time to co-create something of meaning with multiple micro-influencers where the content is more likely to resonate”, said Sarah Evans, Head of Digital at Bottle PR, in the report. 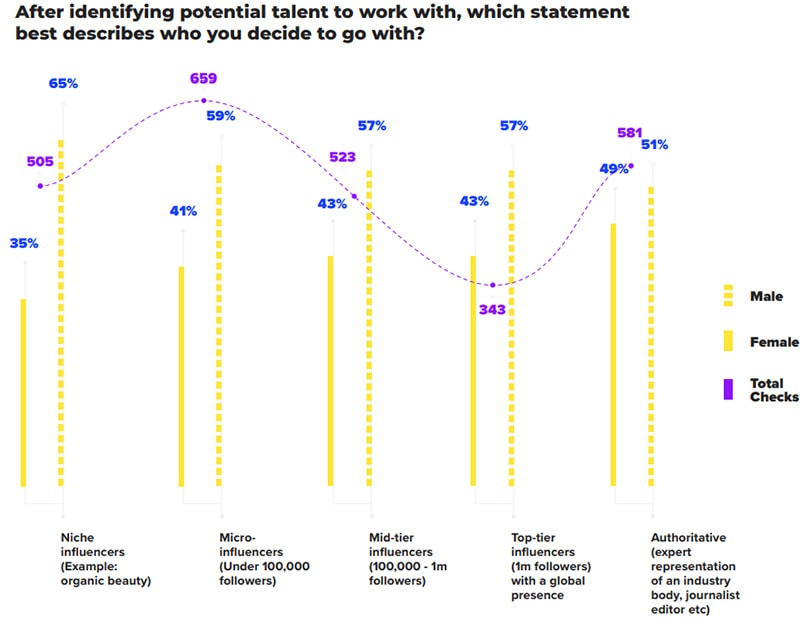 Another answer to the industry’s changing landscape is turning your own employees into influencers, like American department store Macy’s did earlier this year. Companies are also bringing social media expertise in-house instead of relying on external agencies. No less than 33 percent of industry marketers agree we will see the integration of influencers into inhouse roles over the next couple of years, such as Puma’s collaboration with singer and style icon Solange, which saw the athletic footwear brand appoint her as art director.