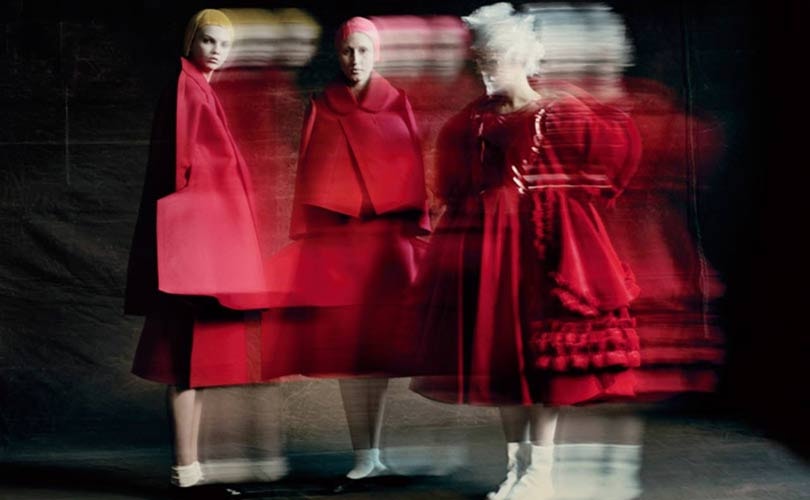 Kawakubo's Tribe: Don't Comme for me unless I send for you

It wasn’t a regular Saturday morning at the Met Museum. Conflict erupted on the third floor, the antagonism cutting through the air in stark contrast with the sprigs of cherry blossom scenting the foyer. No one came to blows but the tension was palpable. Residual shade may still be thrown within this text.

Whose side are you on?

The Comme des Garçons exhibition may be entitled “Art of the In-Between,” but Rei Kawakubo does not reach across the aisle. So there we stood, divided.The fashion diehards on one side, awed into silence, feet planted in chunky shoes, wrapped in chains, flounces, and plastic, with blunt-cut hair; on the other The New York Times-toting, jeans-and-sneakers clad regular with brunch plans, whose voice travels all the way to The Dakota. Two tribes go to war, the first religiously devoted to Kawakubo’s uncompromising, absolute nonconformity to notions of gender, beauty, even design itself; the other, viewing exhibits displayed on mannequins and therefore expecting apparel. It can’t end well.

I sidestep a group of girls on the trail of “Rihanna’s dress.” The singer famously “won the Met Ball” according to Instagram when she showed up dressed in Comme des Garçons just a few nights before. One of the group misidentifies a veiled exhibit as “the one Katy Perry wore” when we of the tribe know Perry wore Maison Margiela, not Comme des Garçons. Novices.

Celebrity references form part of contemporary dialogue around fashion and particularly the Met Ball, so inevitably one visitor declared, like a clairvoyant experiencing tremors, “Ohhh I’m getting serious Gaga vibes.” While Lady Gaga has indeed worn a few of Kawakubo’s creations in recent years, it’s jarring for a longterm devotee to hear the Japanese revolutionary’s forty years of energetic disruption reduced to…Joanne.

The Comme des Garçons universe requires full immersion, no dabbling. But in return for your commitment, it offers the same joy and mind-expanding optimism experienced by lovers of modern art. Seeing the decades of evolution on display is like following Picasso’s journey from early sketches through his blue period to the various depictions of Marie Thérèse and Dora Maar, but this was not even a retrospective. And while painters or sculptors are permitted to be abstract and grandiose, visionaries working in clothing don’t seem to be offered that freedom. Kawakubo snatched it anyway, years ago, and holds onto it tightly. She doesn’t call herself a fashion designer, having no formal training in it; it’s only the rest of the world that labels her that way:

“I have never thought about fashion…I have almost no interest in it. What I’ve only ever been interested in is clothes that one has never seen before, that are completely new, and how and in what way they can be expressed. Is that called fashion? I don’t know the answer.” 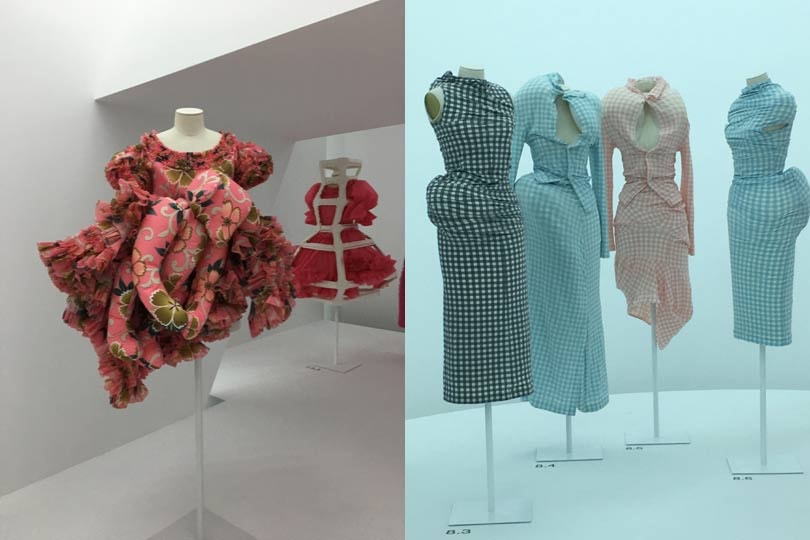 An older gentleman pulls away from the wall he is leaning against, muttering, “ I dunno, none of it does much for me…” His wife who had been staring at a display described as Body Meets Dress, Dress Meets Body, in particular a blue and white gingham nylon dress with bulbous swellings stuffed with goose down padding on the side, delivers her verdict, “Not an area I want to accentuate,” and trots after him. Why aren’t you reading the pamphlet? I want to call after them. She’s rethinking the hourglass…

One of my favorite displays is entitled Child/Adult and many observers seem genuinely enthralled by the exuberantly patterned pieces on display. A crayola-colored floral dress with frills and tentacles can’t fail to put one in good humor and two ladies next to me are clearly under the influence of it. But then I realize they are in fact imagining their granddaughters in it. Age appropriateness is a convention that can be challenged, I want to interject, but decide to maintain my monk-like silence.

I enjoy hearing a woman explaining to her male companion, “It’s the same as if you look at a piece of Claes Oldenburg art, you know, his fabric sculptures…” “Or John Chamberlain?” he asks, hopefully. “Exactly, or John Chamberlain. “ They continue on, smiling. I’m smiling too.

I overhear the word “Homeless,” used to describe the “holey” sweaters of the early 80s famously captured in black and white by photographer Peter Lindbergh, and refrain from saying that fashion students at the time would have made themselves homeless just to get their hands on one.

“But there’s nowhere for your arms to go!” exclaims a voice. I spin around. Your arms might be trapped but your mind is free, did you ever think of that? “Who wears black to get married?” I spin back. Actually, everyone did before Queen Victoria decided to shift to white. 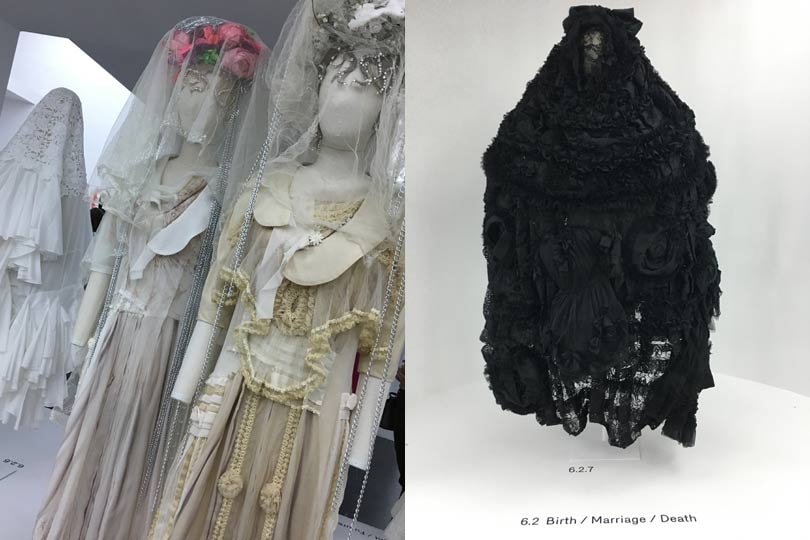 The display entitled Birth/Marriage/Death elicits plenty of interest. One lady jokes, “Well that about sums it up!” and her entourage laughs overly-loudly. It seems to be in relief that they have found something they can connect with.

Then: “Imagine a widow walking into her husbands’ funeral like that.” Would he have that much to say on the matter? I think. “That’s some real Miss Havisham crap right there.” Now you’re getting into the thinking of it. “I like the rose. But I don’t like the outfit.” No, you’ve lost it again: you’re using the word “outfit.” Leave that kind of low-down talk at the door on your way in.

The most egregious remarks of the morning come from two out-of-towners guffawing loudly. “Aren’t you glad you didn’t fly in just for this!” says one, to which her friend replies, “Honestly, there’s nothing redeeming about any of this.”

Oh no she didn’t. Bouncer! Can we show this pair of troublemakers the exit?

But I’m fighting a losing battle. This is the art of the in-between, and that grey area is the very source of the conflict. Just because clothing is placed in a major museum setting doesn’t mean people will leave behind all the preconceptions they associate with everyday attire. Instead they will arrive (cross over?) armed with their knowledge of red carpet codes, utilitarian demands, sexiness quotients and apply them to Kawakubo’s avant-garde system of dress despite what the brochure explains of her intentions. Everyone owns clothing; it’s more democratic than other mediums of creative expression. So everyone feels qualified to opine.

Therefore I’ll leave the final word to Ms Kawakubo herself: “Personally I don’t care about function at all… When I hear ‘where could you wear that?’ or ‘it’s not very wearable’ or ‘who would wear that?’ to me it’s just a sign that someone missed the point.”

Point made. Signing off, flouncing my Comme… 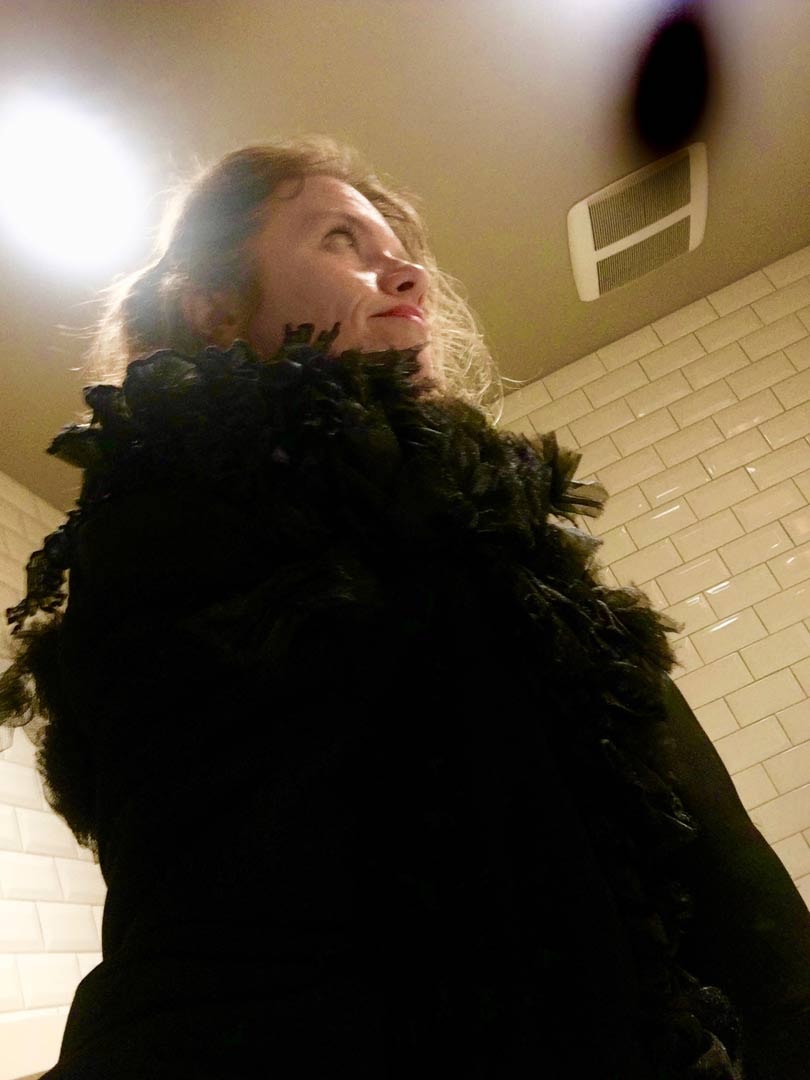