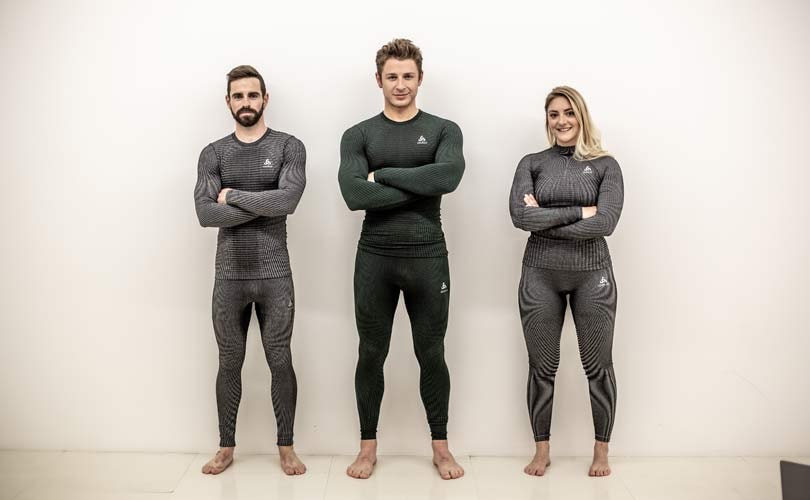 London - When most people think about the late Iraqi-British architect and designer Zaha Hadid, they immediately envisage slick designs characterised by flowing curves and bold lines. At the 25 October London unveiling of the new Odlo x Zaha Hadid Design Winter/Autumn 2018 collection, that trademark style was introduced to the world of sportswear. Taking place in Hadid Design’s modest studio on the corner of Goswell Road in central London, the unveiling of the ‘Futureskin’ sportswear collection was unsurprisingly an art exhibition in itself. Spoiler: A panel chat, a Swiss contortionist, and a sneak-peak at the Spring/Summer 2019 women’s activewear collection were involved. 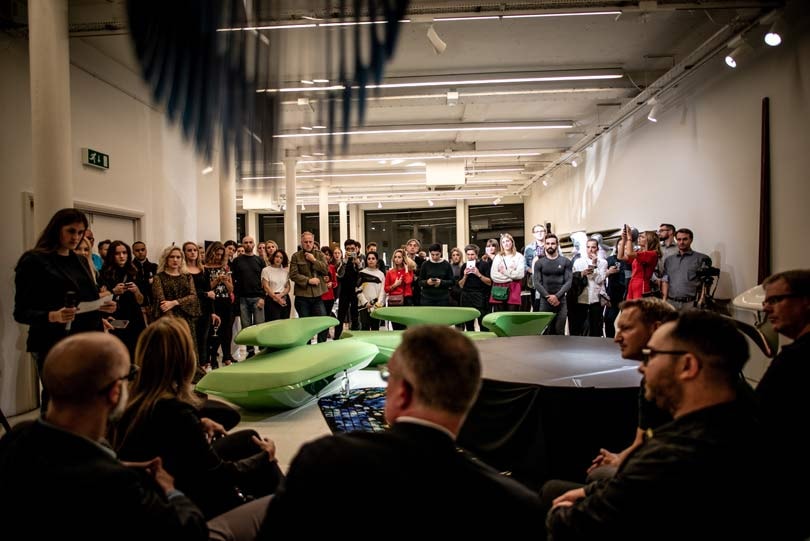 The Autumn/Winter 2018 baselayer ‘Futureskin’ consists of tops and pants (75 pounds each) in both menswear and womenswear. Boasting “no bonding, seams, or inserts,” the singular, flowing form looks to mix Hadid’s design with the Norwegian sportswear brand’s organic bodymapping technology. 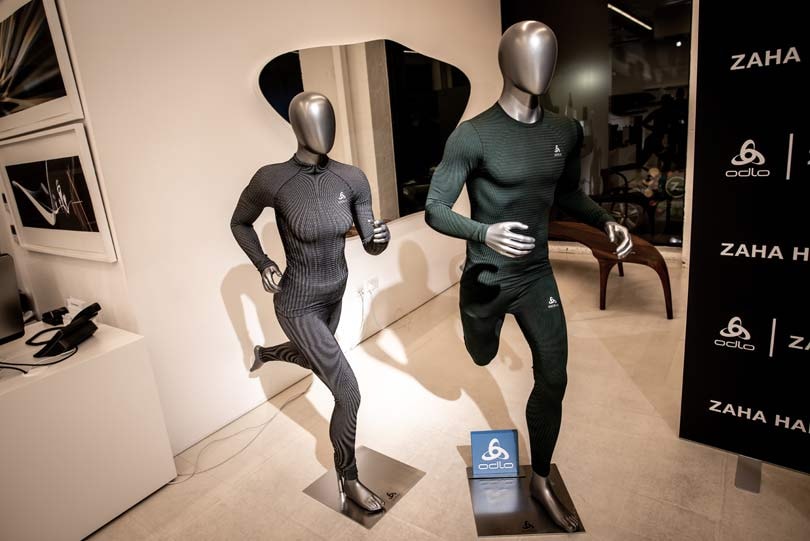 According to Davide Giordano, Associate at Zaha Hadid Architects, venturing into the world of fashion was always an intention of theirs. “Collaborating with other industries has always been embedded in the DNA of the office,” he told FashionUnited “That’s how the late Hadid used to work and that’s how she taught us to work.”

“There are 360 degrees, so why stick to one?” was Hadid’s motto, a philosophy that Hadid Designs looks to continue, and one that proved a big challenge in the design process, according to Davide La Piana, Senior Designer at Odlo. “Working with architects - they see the project in three dimensions, they envision it in three dimensions, whereas we are garment designers so we see things as flat - front and back,” La Piana told FashionUnited. 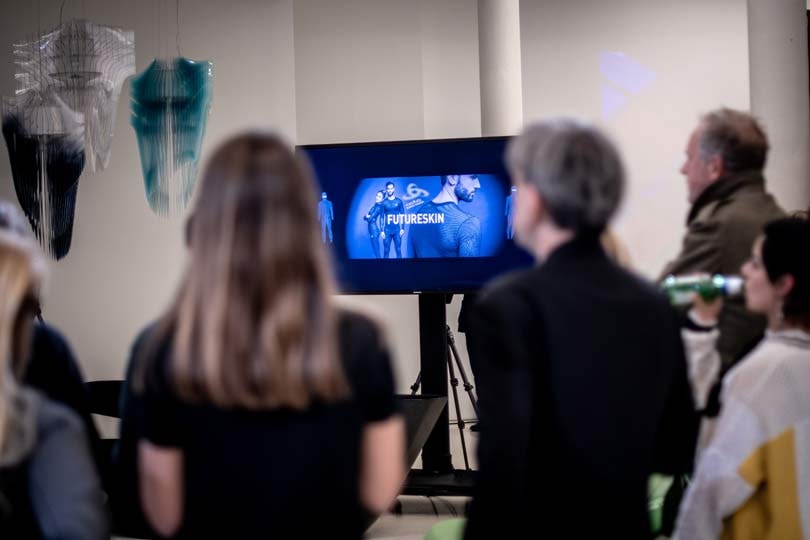 “That was the first big challenge - to translate a three dimensional sketch into a flat sketch,” he continued. Monotonous trial and error was the price they paid to achieve their slick final design. “The first time we sent our sketch to the supplier, the result was just “oh my god what is this?” We had to manually adjust it and twist it. But now we couldn’t be happier. Today was the celebration of a journey which started two years ago.” 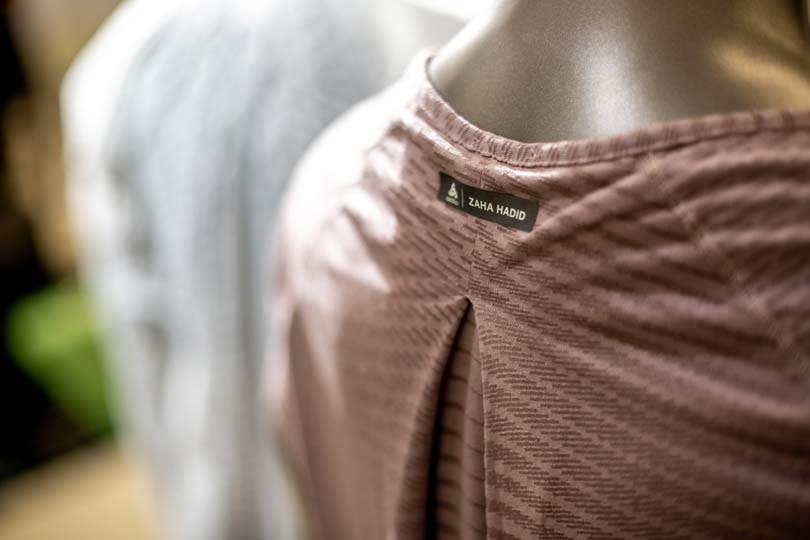 At the event, the Spring/Summer 2019 Women’s Activewear line was also revealed to guests. The ‘Zaha line’ comprised of Warp knit sports bra and tights combined with a Flock print parka. The ‘Lou’ line has long and short sleeved ‘Lou Tops,’ ‘Lou Mesh Bodysuits,’ and the ‘Lou Medium Sportsbra,’ while the ‘Alma Natural’ line showcased the ‘Alma Natural Baselayer Top.’ 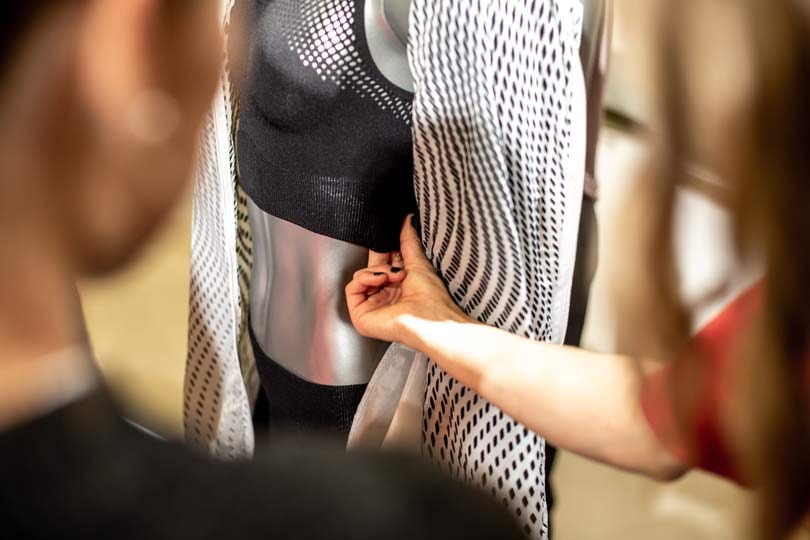 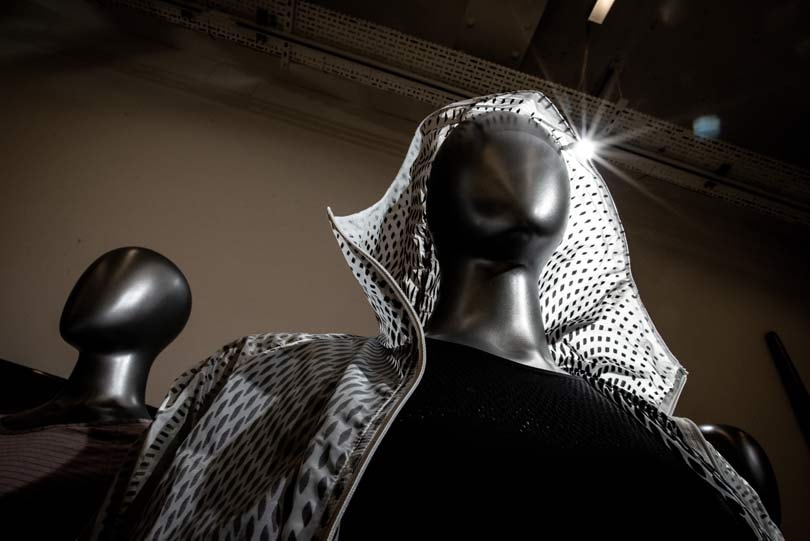 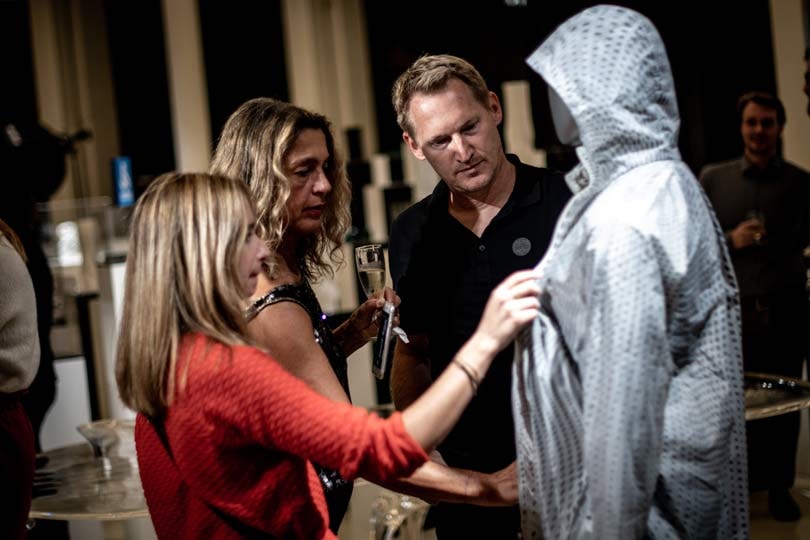 So what makes these designs so different to others? Well, the sewing, according to La Piana. “This seamless knit technology is something that hasn’t been done before: Fluid, seamless, no breaks - that was the biggest challenge of the development. When you look at other designs you see squares - rigged areas. What we’ve done with this is we’ve made something fluid.” 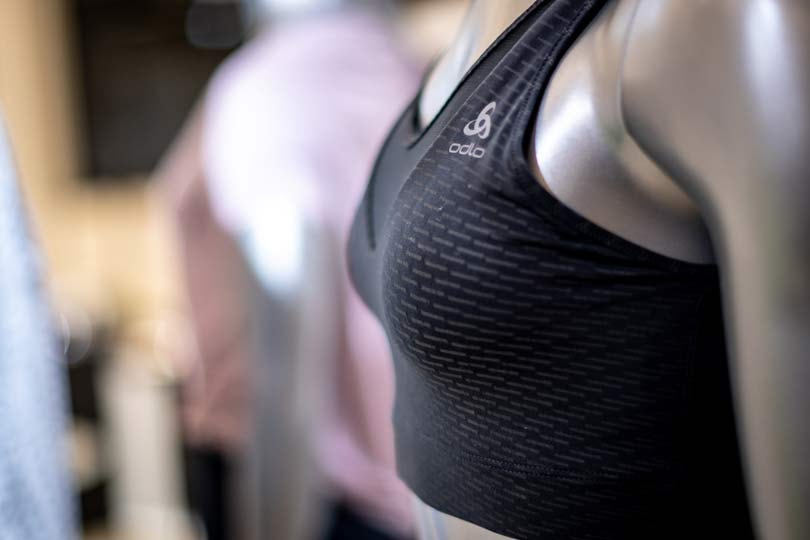 Following a panel discussion from the Odlo and Zaha Hadid Design teams, Swiss contortionist (and 2014 America’s Got Talent contestant) Nina Burri took to the stage to showcase the womenswear Futureskin in movement. “It was the first time I saw the design actually worn, and especially seeing the performance - it was incredible,” Maha Kutay, Director of Zaha Hadid Design, told FashionUnited. “By seeing it in action and up close you get to actually focus on what we worked so hard to achieve - on the detailing of the pieces, which not everyone may notice but for us is very important.” 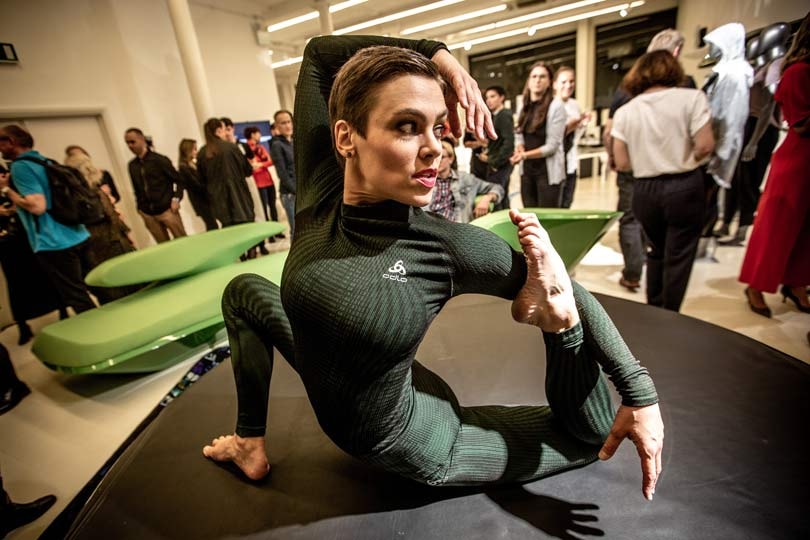 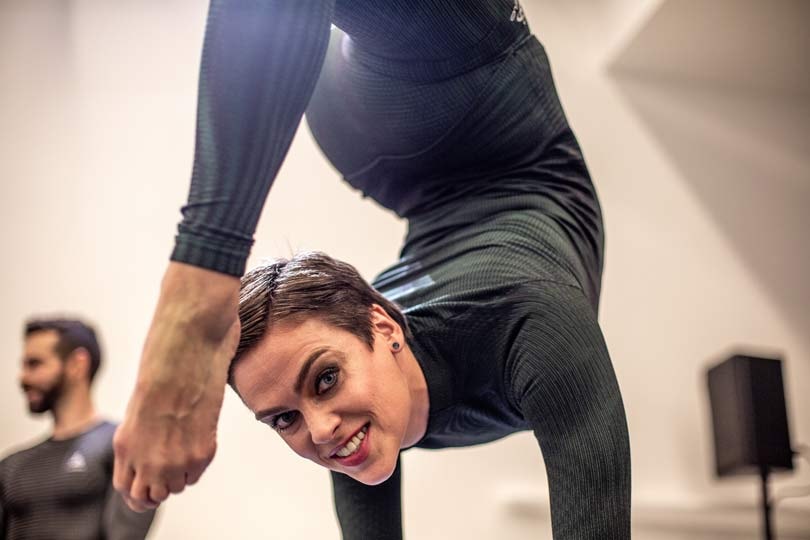 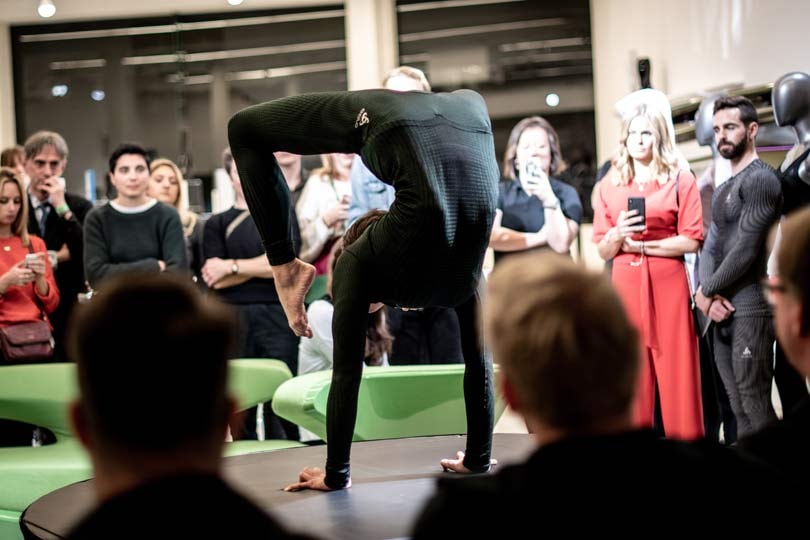 When asked about the challenges faced when the worlds of architecture and fashion come together, Kutay said that - after some initial hiccoughs - it came quite naturally. “I think it was quite natural in the sense that the body is a building and we’re designing a skin. We’re used to designing skins for buildings so it’s the same approach to design that we’re used to.” 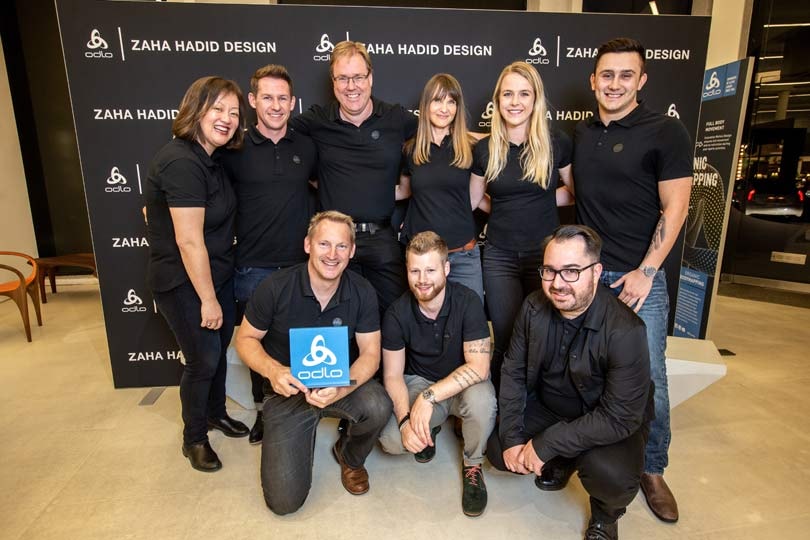 While the Winter/Autumn 2018 Futureskin collection is already available to buy, the Spring/Summer 2019 collection is set to hit the market in February 2019. “We have a number of collections lined up that we’ve worked on where we’ve experimented more with different designs and materials,” said Kutay. “We’re excited to continue this collaboration and see what the future brings.”