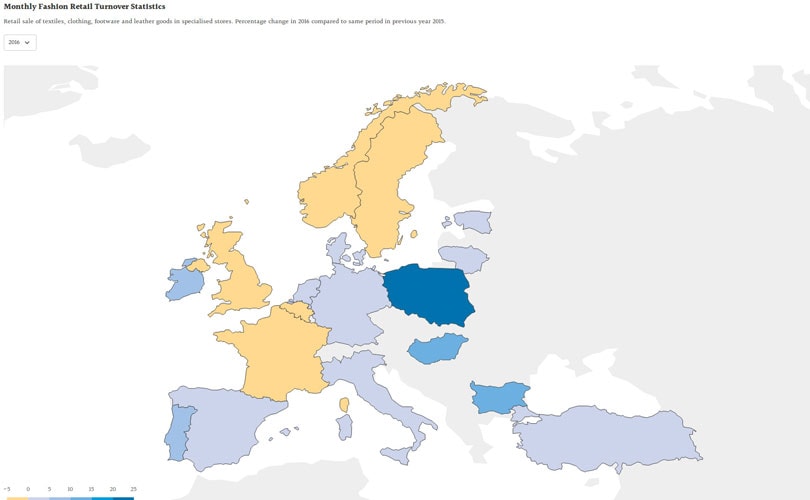 FashionUnited Business Intelligence analyses the evolution of retail sales of textile, clothing and accessories in Europe which, after twelve bumpy months in 2016, don’t seem to get any better. Retailers in the UK, France and Belgium are the worst hit while their Spanish counterparts are the only ones throwing some light into such a gloomy picture.

Following data just released by Eurostat, FashionUnited has traced the evolution of retail sale of textiles, clothing, footwear and leather goods in specialised stores across different European countries compared with that of the previous 2015.

Terrorist attacks in Belgium and France, a hard blow to wealthy tourists’ spending

Over the course of 2016, fashion and apparel retailers in Europe have felt the pain of terrorist attacks in France and Belgium, Brexit in the UK and rising unemployment rates in France, Greece and Italy. These factors, together with the rising impact of the so-called ‘Amazon effect’ (consumers’ shift towards online in search of greater speed, convenience and better deals), are eroding retailers’ margins rather rapidly.

Belgium was the worst affected country, seeing its apparel retail sales decrease by 3.2percent. Second next came France (-2.7) and the UK, losing 2 percent of retail sales volume compared to the previous year. The aggregated result (0.7 percent), although positive, was not strong enough to offset the generalized losses across the European territory.

Spain, Italy and the Netherlands were the main countries in the positive, advancing by 1.05 percent, 0.8 percent and 0.7 percent respectively.

It’s worth recalling that terrorist attacks in Brussels, Paris, Rouen and Nize have severely dented income generated by wealthy tourists, contributing to the downward trend in retail sales for the industry.

The map shows the monthly evolution of the FY16 aggregated EU retail sales of Retail sale of textiles, clothing, footware and leather goods in specialised stores compared to those of the previous year. Source:Eurostat..

As summed up by analysts at Fung Group, “even prior to the Brexit vote, the apparel market in continental Europe and the UK was experiencing challenges, with apparel sales slowing and a deflationary apparel price environment.”

Sadly, the negative impact of aforementioned events is likely to remain in the foreseeable future.“It is expected that this trend could persist and that the European clothing market could continue to underperform in parallel with consumer spending weakness resulting from post-vote uncertainty. Understandably, consumers have a greater propensity to save versus spend during times of economic and market turbulence,” adds Fung Group in a recent report into the effects of Brexit in European fashion retail.

Currency effects on import costs associated with sourcing raw materials and other products from Asia, priced in dollars, will cost European apparel retailers, which report in euros, greater losses from gross margin contractions.

You can explore the month-to-month evolution of retail sales of clothing and other apparel items of each country of the European Union in fiscal year 2016 in the map below:

Poland, a rising star in a greyish sky

In such an uncertain market, Poland has become the European retail safe haven: the Eastern European country shows an overall positive change of 21.7 percent. It’s worth recalling the country’s ambitions to rapidly catch up with the ‘old guard’ of the EU since the very first moment it joined the common market in 2004. Achieving sustainable economic growth and improving its citizens’ living standards have since then be the two leading principles of the Polish EU-quest. Last year, the Polish economy grew 2.8 percent, being forecast to add 3.2 percent in 2017.

Proof of the confidence Poland has garnered as country worth the investment is the recent World Bank’s ‘Ease of Doing Business 2017’ which ranks Poland 24th in a list of 190 countries, advancing one position from previous year’s 25th spot.

Furthermore, this upwards trend is expected to continue at slower, yet steady pace: general YoY retail sales in Poland are estimated to be 1.10 percent by the end of this quarter, according to Trading Economics global macro models and analysts’ expectations. Looking forward, we estimate Retail Sales YoY in Poland to stand at 2.50 in 12 months’ time.