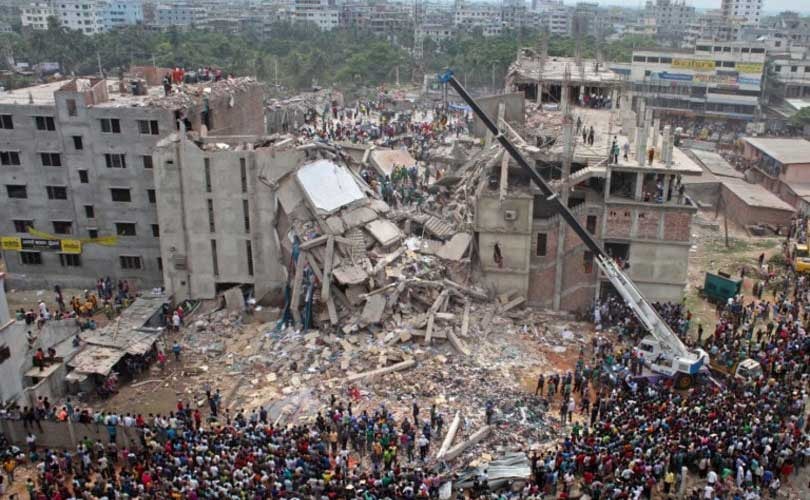 7 years later, has Rana Plaza prepared the industry for Covid-19?

Once again, it is the sad anniversary of the collapse of the Rana Plaza structure in Savar near Dhaka, Bangladesh, a building that housed various garment factories, the constant humming of their sewing machines, operating on two illegally constructed top floors, that made the building collapse on 24th April 2013, burying 1,132 workers and injuring thousands more. The real tragedy is how easily this loss of life could have been avoided had the workers been allowed to evacuate - cracks in the building could clearly be seen more than a day before.

But no, it is these cracks in a system of greed that can be attributed to each one of us. Each one who ever bought a piece of clothing way under market value - which would be most of us given the ridiculously low apparel prices that have actually fallen over the decades. Each one of us who ever had a hand in manufacturing such a piece of clothing, be it ordering it, buying it, designing it, providing the materials for it or advertising it. Each one who knew of the real cost of cheap clothing and didn’t do anything about it.

Because if we had noticed something, said something, done something, the Rana Plaza factory owners, pressured by low prices and slim margins, would not have driven their workers back into a building that was clearly unsafe. Why did the workers simply not refuse to go back to work? Why did they not involve their union representatives? Because there were none. And because if you live on such thin margins, barely feeding your children and making ends meet, then risking your own life is preferable to risking a measly paycheck.

Has Rana Plaza changed anything?

What has happened to Rana Plaza now, the site of the disaster? If we would walk past it, we would not know it was there because there is no plaque commemorating the tragic event. It is simply an empty lot. Those who want to jump the wall and look around can still find labels of those brands ordering their garments here lying around - Benetton, Bonmarché, Prada, Gucci, Versace, Moncler, the Children's Place,El Corte Inglés, Joe Fresh, Mango, Matalan, Primark and Walmart.

Now, only a makeshift memorial of dried flowers, likely left by the families of the victims, reminds one of the 1,132 lives lost. And though sad, it is understandable why Bangladesh officially seems to care so little to remember this event because the show must go on. For a country whose exports depend 80 percent on garments and shoes, building an image of a safe place to source apparel is crucial. And garment factories brimming with work is good for their workers too, after all.

Do garment workers have the support they need in the wake of Covid-19?

So seven years on, it is all about business once again, when the country and the world find itself in a crisis even worse than Rana Plaza. The demand for clothing has plummeted as people across the world are staying home and reassessing what they spend their hard earned money on. As a consequence, brands and retailers are sitting on old stock, cancelling or postponing orders and refusing to pay for in-production orders and materials already purchased. This means factories have to cut down production or shut their doors temporarily, laying off workers in the process, most of them without severance packages or anything to tide them over. With no financial resources or a social net to fall back on, suddenly they are worse off than after Rana Plaza, finding themselves not only out of work but out of a home and food too.

This is all the more ironic because seven years ago after Rana Plaza ‘happened,’ we were promised this would never happen again by an industry that came up with the Bangladesh Accord, the Alliance and other agencies to improve fire, building and worker safety in Bangladesh. What these agencies did not foresee was how to hold buyers accountable and stick to their contracts.

Garment workers in Bangladesh recently took to the streets and protested in great numbers despite the lockdown restrictions because once again, their health and potentially their lives are still worth less than a measly paycheck.

“I see the western world stocking up on food while garment workers are going hungry. Where are the brands who claimed to be sustainable now? I will never forget how they’ve treated us during Covid-19. It is like Rana Plaza all over again”, comments labour activist Kalpona Akter according to the Dhaka Tribune. She is the founder and executive director of the Bangladesh Centre for Worker Solidarity, one of the three unions that currently documents job cuts. “These workers won’t get jobs anywhere else for the next two to three months. The factories must take them back and the government needs to ensure this,” she added according to Reuters.

This is why US-based NGO Remake together with Mostafiz Uddin, owner of Bangladesh-based denim manufacturer and exporter Denim Expert Ltd., and labour activist Akter has launched the #PayUp initiative, urging international brands and retailers to honour their commitments and pay for in-production orders now.

“Unlike Rana Plaza, we don’t have two years to wait for a compensation fund. Primark turned their backs on us during Rana Plaza and now again during this pandemic. I am dealing with women, many who are single mothers who haven’t been paid and are going hungry. If we don’t have urgent relief I am afraid some will commit suicide”, warns Nazma Akter, founder and executive director of Awaj Foundation, according to the Dhaka Tribune.

Seven years ago when the Rana Plaza building collapsed, the fashion industry could have seen the signs of the time and reflected on its practices and values. While that was undoubtedly done, it was not on a global scale. As the coronavirus pandemic forces the world now to hit a reset button, this is a chance for the garment industry too to slow down and finally rethink and reset its practices and values - invest in lasting, sustainable, high-quality clothes and do away with throw-away fashion once and for all. Invest in lasting relationships with suppliers and really get to know who made our clothes. Be transparent in all our dealings and be better prepared for the future so that Rana Plaza never has to happen again.