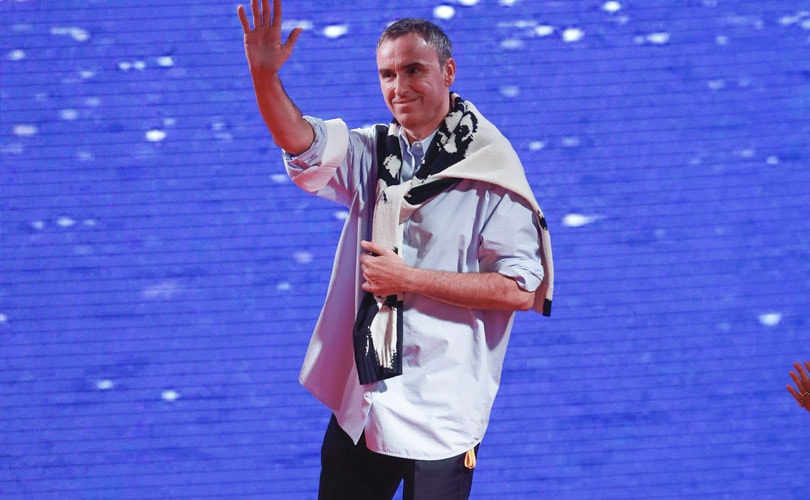 Say Au Revoir to Raf Simons at Calvin Klein. It was a short, albeit brilliant tenure of two years and four collections. The man even became the second designer in CFDA history to win the award for menswear and womenswear designer of the year, a feat only ever accomplished before by Calvin Klein himself.

Prior to Simons' arrival, Calvin Klein was operating in stagnation for a while, almost riding on the glory of the world renowned Calvin Klein name itself. Their parent company PVH Corp. took notice to the stagnation and decided it was time to make a change. Enter Raf Simons, the former creative director of Christian Dior, and prior to that, Jil Sander. While Simons' designs for Dior were more scaled down than that of his maximalist predecessor John Galliano, he brought something different to the brand that didn't go unnoticed.

His several years spent at Jil Sander were met with applause, and Simons was also acclaimed for his own eponymous label which has a cult following and is popular among the street style crowd. His arrival at Calvin Klein was met with both applause and apprehension, as many wondered what he would do with the storied American fashion house. He was a European import with a very different take on things, but he had one task above all else: bring new life to a stagnant fashion house, a feat his colleague Alessandro Michele had pulled off at Gucci, and a formula many brands were looking to recreate. 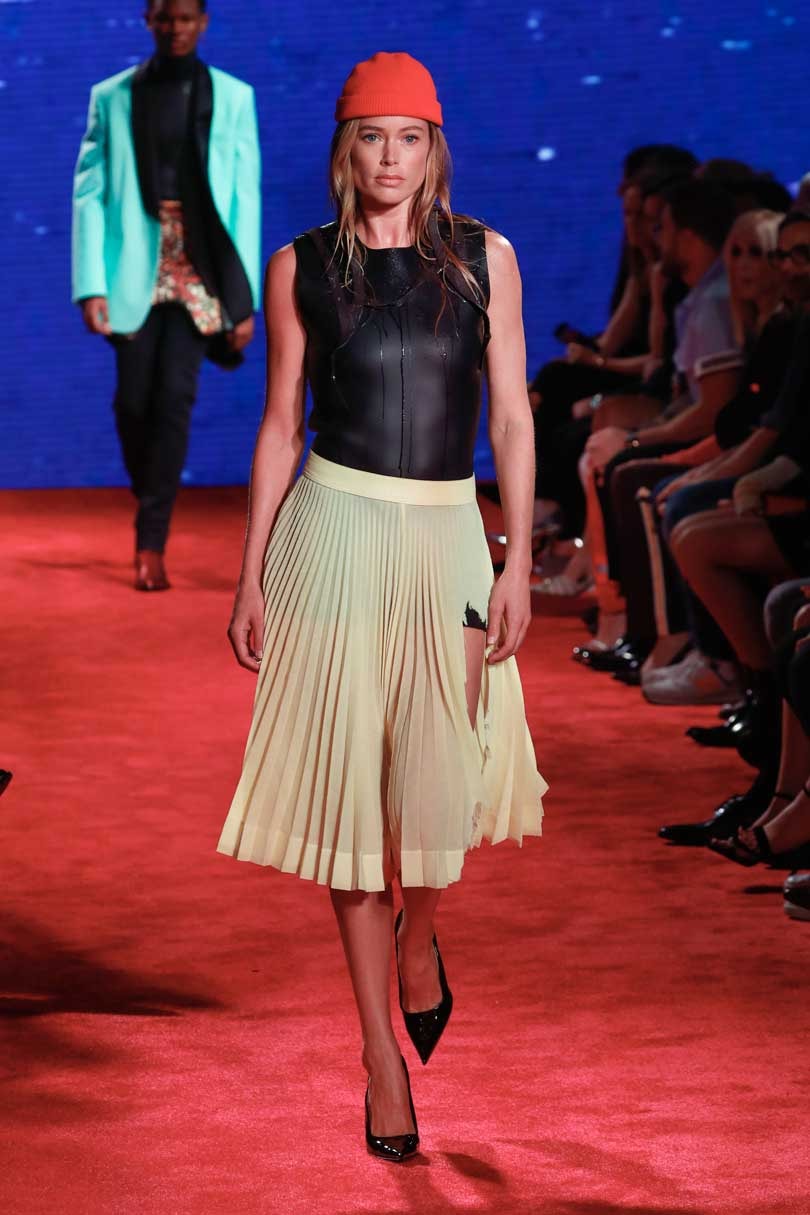 Simons' first collection was met with critical acclaim. It was seen as a beautiful new era at Calvin Klein, and the proof was in the pudding with an increase ins ales, the rebranding of Calvin Klein Collection to Calvin Klein 205W39NYC, the launch of made-to-order service Calvin Klein By Appointment, and the brand being seen on the backs of street style stars at Fashion Month. Trés chic.

However, the magic spell that Simons was able to cast over Calvin Klein only lasted so long. The brand's Q3 results were far less than promising, and earned the ire of PVH Corp. CEO Manny Chirico, who in November delivered the news of the brands poor performance. That coupled along with Simons' growing dissatisfaction with working at Calvin Klein led to his abrupt departure nine months before his contract was even up.

It was a bit surprising how quickly this Titanic sunk, but in an era constantly demanding newness, most trends come and go faster than people even change outfits, and the retail apocalypse upon us. Simons' star was unfortunately destined to fizzle out just as fast as it started burning. Given the history of a brand like Calvin Klein and the fact that most of their money is made off of their more accessibly priced things in department stores like Macy's and Bloomingdale's versus their 205W39NYC line carried at more high-end retailers, the Gucci-style turnaround ever expected of the brand was not going to happen. The reality of the situation is, for no American brand will that ever happen.

Gucci is a storied luxury fashion house whose roots have been luxury for the entirety of its global popularity. From top to bottom, its roots, products, and history are high-end, and its appeal only has to be ever so commercial. Their creative director Alessandro Michele, with his penchant for maximalism in an era where maximalism reigned supreme, couldn't have been a more perfect choice to lead the house into its next phase.

Contrast that with a brand like Calvin Klein, whose roots are in denim, underwear, and a level of fashionable accessibility, a high-fashion approach may work for a hot minute, but when those customers buying Calvin Klein off the sales racks at Macy's aren't responding, Houston, you have a problem. Not only do American brands also have to fend off the retail apocalypse and growing competition from Amazon, but for American fashion, which is typically more approachable, and for brands where a level of accessibility needs to be hand, that formula will never work.

Even taking a look at a brand like Ralph Lauren, which is currently working on a turnaround, and their bread and butter is their Polo Ralph Lauren line, which has maintained its classic look, always throwing in a few fashion pieces, for decades. Ralph Lauren has both managed to maintain those classic items that appeal to the mass market consumers who are the ones really keeping his brand a billion dollar enterprise, all while still producing the company's more high-end offerings Ralph Lauren Collection, RRL, and Ralph Lauren Purple Label.

Still, Ralph Lauren is a family-owned business, one with a classic look to it and an eternal appeal to a preppy consumer or those looking for the status symbol that Ralph Lauren is still considered. An example of a successful American turnaround, and someone who wasn't looking to replicate the Gucci formula would be Tommy Hilfiger. 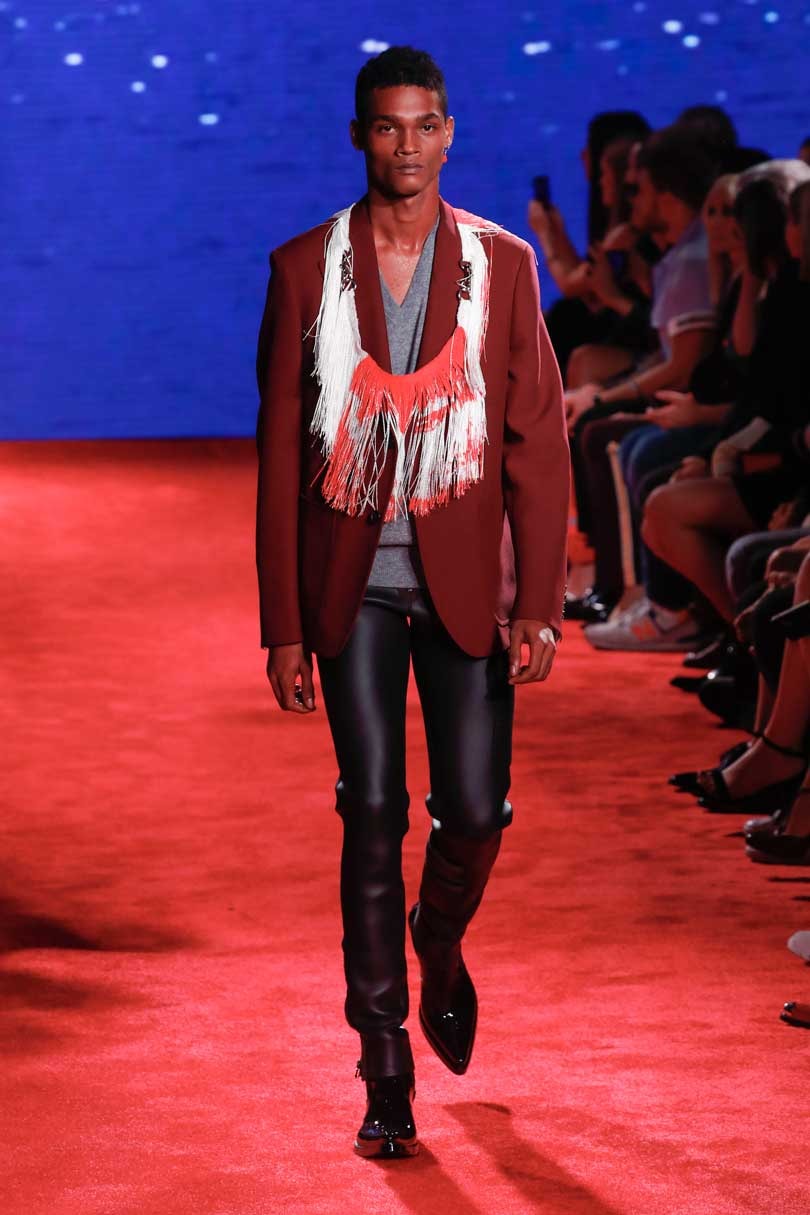 Tommy's brand has always been very quintessentially and accessibly American. It had the right amount of prep, the right amount of street, and major global popularity. As Hilfiger looked to take his brand into the next era he switched to a see-now-buy-now format for his runway show, enlisted the help of It Girl Gigi Hadid for a fashion collaboration, and used social media to make his brand the talk of the town and sellout the collaboration within three days.

He never lost sight of his customer, kept himself relevant, didn't do anything unapproachable to his longtime customers, and found a formula to take Tommy Hilfiger into a new era. Simons' approach was creative, brilliant, daring, and worthy of praise, but was too ambitious for the American consumer. It certainly had its moment, there's no question about that, and those of us within the fashion industry loved it, adored it, consumed it, and kept wanting more. However, an industry stamp of approval doesn't always translate to long-term stellar sales.

Simons was accused of taking the brand in too high-fashion a route. Reshaping a brand the magnitude of Calvin Klein was never going to be any easy feat, but he seemed poised for success. However, given the consumer psychology and economics of American consumers today, the Gucci style turnaround of any American brand should never be expected. The formula for relevance with these storied American fashion houses needs to approach all angles from high-end to accessibly priced, and has to never alienate any customers, all while bringing in new customers as well. It's a holy trinity that is difficult to master, but that isn't to say it can't be done.

Perhaps Calvin Klein needs a break without a creative director for a while, to play around with a few different business models, and in a sense find itself again. The departure of a creative director is like breaking up with somebody after all, and a good spiritual journey always does one well after a break-up. The future of Calvin Klein is up in the air, but it will undoubtedly go on, but who knows who will take the helm next. As for Simons, he can return to focusing on his own line, and perhaps he'll return to Europe to work for another major fashion house, one where his aesthetic will be better suited for long-term growth.