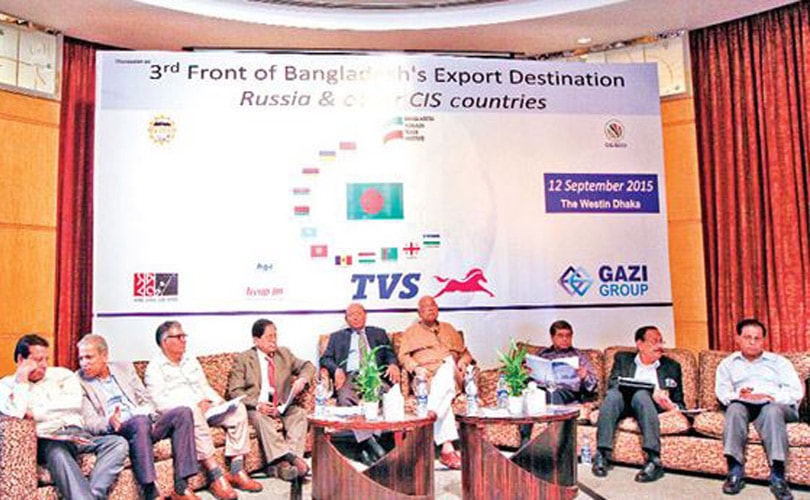 Bangladesh wants to intensify its export efforts, planning to diversify both products and destinations, particularly to Russia and other countries of the Commonwealth of Independent States (CIS), where it also plans to open its first RMG warehouse outside of Bangladesh.

“The country has so far only concentrated on EU and American markets for exports. But now the time has come to explore new markets as well with diversified products,” said Bangladesh's finance minister AMA Muhith at the “3rd Front of Bangladesh's Export Destination Russia and Other CIS Countries” in Dhaka last Saturday, organised by the Bangladesh Foreign Trade Institute and the CIS-Bangladesh Chamber of Commerce and Industry.

“We have good relations with these countries [CIS] but we have failed to utilise our export potentialities due to lack of initiatives... Bangladesh has no warehouse in the world. But we are now thinking of such a one to bring about pace in our exports,” added Muhith, calling the warehouse “a good idea ... as our products have huge potential there and the presence of such a warehouse will help grow exports”. He urged entrepreneurs to find a suitable place in a CIS country soon and to build a warehouse, which will be mainly used for apparel. He confirmed that talks were also on to establish an RMG warehouse in Gujarat, India.

Commerce minister Tofail Ahmed highlighted the urgency for extending cash incentives to help diversification of the country's export base and markets. Muhith confirmed that the government would soon review the overall cash incentive situation and make a few more export items eligible for the benefit.

The football World Cup, to be held in Russia in 2018, was also on everyone's mind as the world's top sporting event has the potential to boost Bangladesh's garment exports, particularly knitwear for which a high demand is expected during the event.