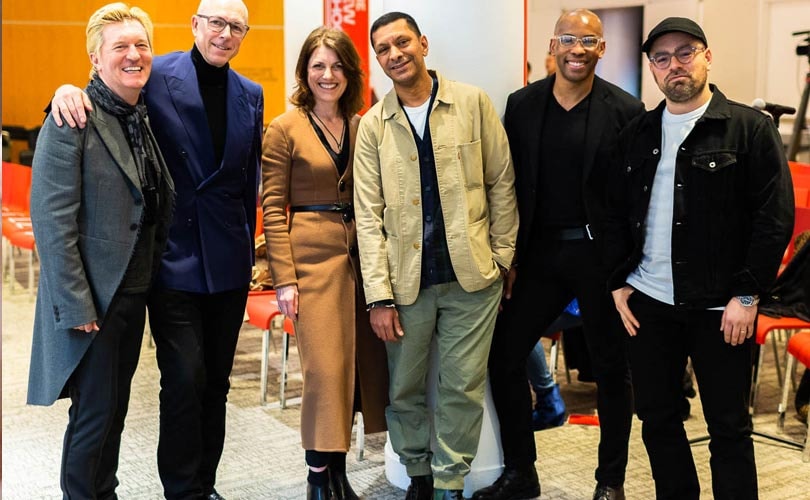 Fashion leadership; 5 experts reveal how to be the boss

To celebrate the launch of their new Fashion Management Program, Parsons brought together a panel of five industry leaders to discuss success before an audience of students and professionals keen to find out if leaders are born that way or if anyone can become one.

The prominent figures, some having flown in for the event, hail from across fashion’s disciplines of media, marketing and commerce: Jeff Carvalho, Managing Director of HighSnobiety; Raoul Shah founder and CEO of London-based global communications agency, Exposure, with clients such as Nike, Converse, Levi’s, Uniqlo, Doctor Martens; Claudia Cividino, CEO of Loro Piana for North America; Christopher Lacy, former Director of Customer Experience at Barneys New York; and Dylan Jones, editor-in-chief of British GQ. As they remove the veil of mystery surrounding leadership, patterns start to emerge which form a blueprint for success.

No strategy is a common strategy

Jones: I’ve never had any tactic, only that from the age of 12 I wanted to go to art school. That was about as strategic as I was. When I left I had absolutely no idea what I was going to do. I was working in a nightclub, I was a film extra, I shoot down Roger Moore’s plane in Octopussy. At 22, I was getting up at 4 in the afternoon, watching TV, then going out to a nightclub. A call from a photographer friend who was working for i-D magazine which had just launched asked if I could come along and interview his subjects. I got offered a job. I realized I never wanted to do anything else and I pretty much haven’t ever since.

Lacy (who has just left his position at Barneys to branch out on his own): When I got into this industry, it was not purposeful. I didn’t love fashion, but I loved people. My first job was with Armani. I loved the business because of how people interacted with it and my career progressed because I understood consumer behavior––to Hugo Boss, Gucci, Donna Karan, Barneys. None of it was intentional. It was all accidental.

Jones: I became editor of i-D quickly, about a year later. Someone wrote to me and I was so intimidated by them I didn’t give them a job. I immediately realized I’d done a terrible thing. Ever since, I’ve tried to hire people who are better than me. It’s ridiculous insecurity not hiring someone because they’re better than you.

Lacy: I can only lead people if I know how to lead myself. There is a lot of internal work that needs to go on.

Jones: Leadership is all about confidence. I didn’t set out to be a leader. I set out to be creative. But had to become successful because otherwise no one sees that you’re being creative. It’s about setting your course and bringing people with you. Also as an employer, it’s crucial to understand people’s motivations: If you understand every decision they make, you can anticipate things.

Cividino: It’s a process of maturing your own wisdom. I’m not the same leader I was even two years ago.

Shah: Make work better than being at home and feel a responsibility beyond looking at the numbers to focus on the value system. I still go to work and treat every day like it’s the first.

Cividino: Speed is so integral to how we function today but I emphasize the importance of taking your time and internships which allows you to see where you might fit in.

Lacy: Understand that you’re not a singular being and it’s okay to be talented in multiple things and it’s okay to change your mind. You think you went to school for one thing, but then you realize you can’t stand it. That was me.

Jones: Get things done. I hate that awful expression ‘Skill sets.’ When new people arrive, I don’t want to talk to them beyond hello and welcome, then I just want them to get things done. We had an intern who we kept bringing back who was so irritating, but we couldn’t let him go, because he got things done. There came a point when we hired him, he has an amazing career now.

Shah: It takes time. You’ve got to do your apprenticeship. I found my place after about ten years working. Figuring out what you don’t want to do quite quickly is as important and you’re only going to be able to do that by trying a lot of things in a short time in a series of different environments.

Leadership is all about the ability to handle disruption

Jones: It’s all about the ability to handle disruption. I work for a legacy publisher. We still produce 14 magazines a year, we update our website every 14 minutes, the job you do now is very different than the job ten years ago, but I don’t think anyone has to be a soothsayer. I defy anyone to tell me where media is going to be in five years. You just have to be able to move very quickly.

Drop out, get fired

Carvalho: Failure, taking an L––people don’t talk about it, but it’s important to personal development. I joined HighSnobiety at 32 after plenty of failures. The internet happened and I was that guy on the computer for 10 hours. It made me drop out of pharmacy school. I followed my interests, failed hard at a music start-up, went to work for a technology company 9 to 5 and after 5 I tuned into my journalism degree. I wrote about everything, wasn’t being paid. I took a risk, quit my day job, made no salary for essentially 24 months. I knew I would not be able to live with myself if I didn’t. It wasn’t easy but 11 years on, it is. We’re not the biggest website out there but I’ve been able to find something I really love to do, and sustain myself and my family. If you are ready to take the risk you have to go 100%.

Cividino: I fail every day honestly. I’m ok with that. I was fired from my job a decade ago and for a longtime didn’t speak to anyone about that because I had so much shame. I had fundamentally failed with a capital F. I thought my life was over, my career was over. It was the best thing that ever happened me personally, professionally, as a leader. I wouldn’t have the insights now unless I had gone though that. I’m a big proponent of failure.

Shah: I was fired once and was so scared of never being hired again that I worked so hard–– got out there and hustled. The failures make the most entertaining stories. We failed trying to have offices in too many places, diversifying from fashion to luxury; we got into talent management about 10 years ago and that wasn’t thought through. Failures make you reset reality. When you know what you’re good at, you have to disproportionately invest in those parts of your business.

Lacy: 2008, recession, I’m at Gucci and they say to me, ‘Hey, we’re going to get rid of your position.’ I don’t even know how I messed that up. I went into a state. In that moment it seemed like it was the worst thing that could have happened. But then months later you realize you’re fine.

Jones: Yeah it hurts, but no one died. People get fired, just move on. We indulge ourselves thinking it’s terrible, but it’s not that terrible. You get another job eventually.

Jones: Conde Nast used to be about 96% women. I was very much in the minority but as the world has exploded digitally all the geeks are guys. That’s a huge problem. Our gender spilt has changed enormously.

Lacy: I think something like 8 billion dollars has been spent in inclusivity programs but in most of those companies communication around those programs is not truthful. So we’re just spinning our wheels in the same spot.

Cividino: It’s not just fashion. I can count on two hands the number of CEOs at the top of the Fortune 500.

Quality you recall in your best mentors

Lacy: Strategic thinking while also connecting with people on an emotional level.

Jones: The best work/life balance of anyone I’ve ever met.

Shah: They made it a safe environment to try anything, screw things up, and it was never a career-ending moment, always fixable.

What do you look for when hiring?

Cividino: An endlessly curious mind. That’s the seed of innovation and those are the people I always look for when I build teams and look to build businesses.

Jones: We’re always looking for someone who has not come up in a traditional cookie cutter way, not someone with a traditional resume. Having an unusual background is far more interesting now than coming through the orthodox way.

Lacy: Education gives people one type of intelligence but fails to guide them on how to approach situations, how to problem solve. It’s not young people only. These skills should come from both academia and experience.

Jones: Don’t assume everything is transactional. It’s not just about process, it’s about people.

Shah: The most interesting people are the ones who have other things going on outside work. You have to have some passions, interesting stories to tell about what you get up to in your downtime. Working 24 hours a day doesn’t not make you better or smarter than everybody else. There has to be a sense of what you are about individually and carve that out as an anchor.

Jones: Just because you’re successful doesn’t mean you’re any good at what you do. We live in a world where there is a race to the bottom and I’m continually disappointed and surprised by people you would think are about quality but are not. An obsession with quality is more important than the obsession with success.

Shah: To illustrate that just look at politics in any part of the world right now to see that you don’t necessarily need skills to get to the top.

Carvalho: Leverage hard. You can make a mistake and be forgiven.

During the month of March FashionUnited will focus on Work in Fashion. For all reads on the theme, click here.