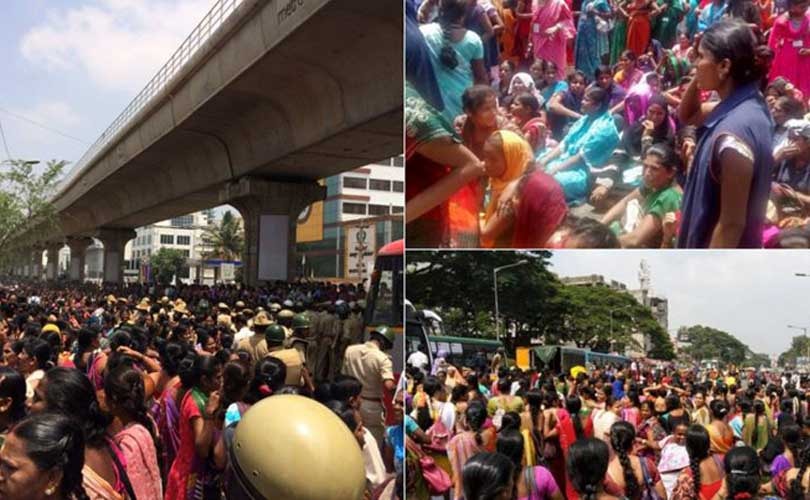 Mumbai - Since Monday, about 15,000 garment workers - many of them women - from five garment units have been protesting on the outskirts of Bengaluru (formerly known as Bangalore), the capital of India's southern state of Karnataka. The workers staged the massive, at times violent demonstration to protest against changes in the Provident Fund Act, the country's pension scheme that currently has about 50 million subscribers, among them many garment workers.

"We want full PF money, not only our part. Several of us will need it to fulfil our aspirations like owning a house and several other things," a protesting employee said as quoted in the Bangalore Mirror. Every month, salaried employees contribute 12 percent of their wages into their provident account and the employer matches this.

For many, not being able to take out their provident fund money when they need to would have dire consequences as most garment workers - deemed too old - are out of a job by the time they are 50. According to the proposed change, they would not be able to access their provident fund money until they turn 58. For many, waiting for eight years would mean not being able to survive.

The garment workers in Bangalore launched the agitation on Monday, allegedly panicked by reports saying the new norms would bar provident fund withdrawals entirely. The government has since rolled back on the planned changes and will allow pension fund subscribers as before to withdraw their entire retirement fund money in case of unemployment for two months or more.

In March, the government had to already reverse the planned decision to tax early pension fund withdrawals, which had caused an outcry from salaried workers. In a notification from February, the labour ministry wanted individuals to withdraw only their fund contribution plus the interest earned but not the employer's contribution. In addition, they would not have been able to claim their fund money before turning 57.

“The main contention is that many workers of the unorganised sectors are not sure of being employed till they are 58 years old. Workers who are over 40 years are unsure, as they may not be able to find suitable jobs,” explained Jayaram K.R. from the Garment and Textile Workers’ Union and termed the planned changes an “anti-worker” move.

The pension fund scheme is an important assurance for many workers that they have something to fall back on should the going get tough - in case of layoffs, prolonged unemployment, emergencies in the family and the like. For many women, the fund is an official way to keep money for later and not having to hand over all their earnings to husbands, in-laws or their own families.