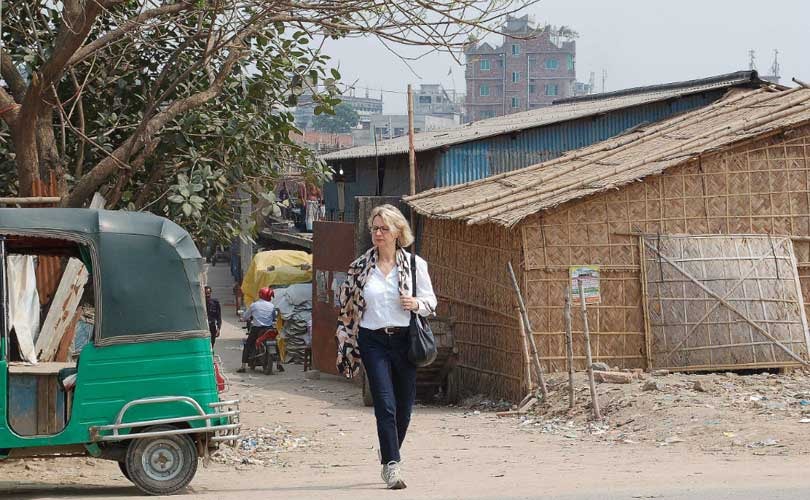 The fashion industry is a versatile sector that, apart from glamour jobs like designer, model and creative head, requires a mulitude of unusual jobs outside the limelight. This article takes a look at production and supply chain management, which have been giving more and more importance to areas like sustainability and corporate social responsibility (CSR).

FashionUnited spoke with Maren Barthel, corporate responsibility manager with the Otto Group, a business group and service provider that is active worldwide. In this role, she travels year-round in the company's sourcing countries in Asia, implementing and monitoring compliance with social standards, guaranteeing socially acceptable working conditions and implementing environmental measures. In addition, Maren Barthel is involved in dialogueing with civil society, politics and other companies to further advance improvements in the global supply chain.

August is theme month at FashionUnited and „Work in Fashion“ wants to introduce our readers and subscribers to different aspects of the fashion industry as an employer. Maybe you could talk a bit about how you ended up in your currrent position and about your career; if it was a direct path.

No, it certainly was not a direct path. Initially, I had no intention or interest to work in fashion or the textile sector; I used to even skip the fashion pages in magazines. In the mid-80s, I started studying political science, economics and Chinese and graduated in 1990. I was aiming for China, which started to open up as a country in the mid-80s. However, at the time, I did not have a concrete idea of what I was going to do in China but I was open for anything. The massacre at Tiananmen Square in Beijing in 1989 interrupted my plans and to bridge the gap, I enrolled for further training in business management, focusing on trade fairs and events. 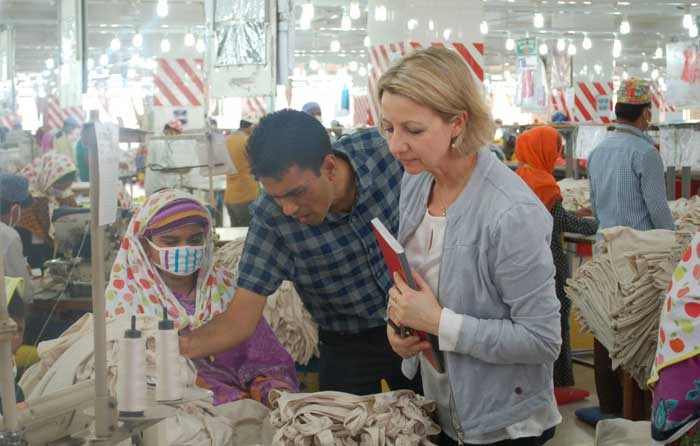 A fellow student passed on the information that department store chain Karstadt was looking for someone with Chinese language skills to expand its direct business in China. At the time, suppliers in Hong Kong produced their textiles in China and buyers tried to avoid the detour via Hong Kong. So I applied, was hired and started working in Asia at the so-called China Coordination Department. My task was to pitch the direct business in China to buyers because they had little intentions to travel to mainland China. Hong Kong was beautiful but China was extremely cumbersome in terms of travel, hotels, entertainment but particularly when doing business. For example, when samples were given, it took quite some time for counter samples to reach. In addition, they usually did not meet expectations because Chinese suppliers lacked the necessary experience. During my one-year stint in Hong Kong, it was decided to open an own buying offices in Beijing and Shanghai and I was offered to head one of them. So I went to Shanghai and via various detours, ended up in fashion.

What were some of the challenges you faced?

Partly it was difficult without a background in fashion but local merchandisers explained quite a bit and over the years, I gained much technical knowledge, though I would not perform any quality control.

At the end of 1996, I went back to Germany where I underwent in-house management training. From 1999 to 2002, I was in China again. By then, sustainability had become a big thing, even with the NGOs, and upon my return to Germany in 2002, I was asked if I wanted to be responsible for this area. I agreed and in 2005, returned to Shanghai where I again headed the buying office, which had grown considerably, partly because of the merger with the German mail-order company Quelle. At the beginning of 2007, I transferred to my current employer, the Otto Group. 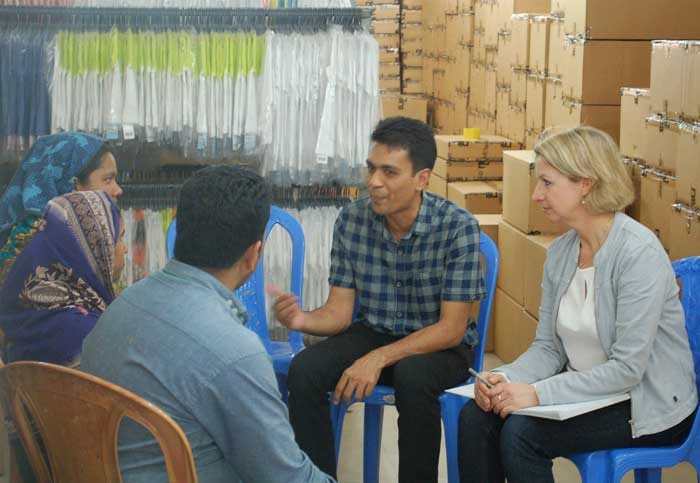 Was it hard initially to push for sustainability?

At the beginning of the '90s, sustainability as an area was not very much rooted and posed great challenges for all of us. When visiting factories in China, for instance, I used to notice blankets under the sewing machines, so that we knew that the workers would sleep there as well. That was a problem, of course, both in terms of product quality and well-being of the workers because they practically lived on and under their sewing machines. At the time, the awareness was a different one and many things were not recognised as problematic.

The Otto Group can look back at a long history in terms of sustainability. Already in the 1980s, environmental preservation was a company goal and in the 1990s, the Code of Conduct formed a base for worldwide guidelines for social conduct with workers in factories. At the turn of the millennium, the industry as a whole agreed for the first time on certain social standards for the supply chain and, following an initiative by the Otto Group, developed the AVE sector model. Initially, the implementation of factory audits and training was hard because factory owners lacked the necessary understanding and awareness. However, the sector model and the collective action of several companies helped tremendously in building up the factory owners' understanding. This was not always cause for cheer but rather a relative new concept for many of them.

You have to bear in mind that the textile industry is a classic newcomer business. Thus, many people in China opened a textile fabric during the boom years rather than cultivating rice for example. They really put in a lot of effort and showed off their factories with pride. And then someone comes along and says “you can't do this, and this doesn't work either“. One has to understand the other perspective as well. But I can say that much has changed in the last 10-15 years. 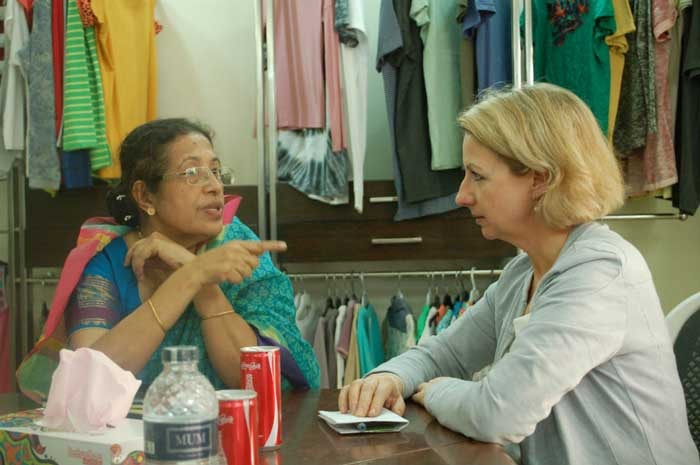 What about being a woman in your position, was that difficult?

That I am a women has never been a problem for me in China. After all, Mao himself said that half the sky is supported by women. Thus it is not unusual to find women in leadership positions. A far bigger problem was my age: At the time, I was only 28. In China, age matters a great deal; it lends credibility and authority. Of course the Chinese appreciated that I spoke their language but my age remained a challenge. We once had a situation, a big order, that had just been sown together shoddily. So naturally, there was a big complaint and we discussed how to rectify the situation. There I was met with the question 'Well, don't you have to clear this with your boss in Kong Kong?' I replied 'No, I am responsible for this area and can and will decide this.' That was the ice breaker when they realised, she can make decisions, she is allowed to make decisions and what has been decided will be implemented. From then on, my age was no longer mattered, only my position. It is important in China that both partners are on the same level hierarchically when negotiating.

Is the “western view“ that one undoubtedly arrives with a hindrance or does one discard it over time?

I think it is not so much about the „western view” but about compliance in terms of existing regulation and guidelines. Every country has its own legislation which regulates areas like wages, occupational hazards and safety; just adherence to them is often a problem. There are situations, of course, in which relaying these topics is difficult and one gets impatient and secretly rolls one's eyes but fundamentally, I have observed a certain willingness among suppliers and in the factories to implement the requirements.

In your post on the Otto Group Unterwegs blog (in German), you describe the attitude “Cha bu duo“ in China, which corresponds to something like „that'll do“, indicating that everything can be made to fit somehow. Have you imbibed this attitude as well over time?

In terms of my private life, yes, I have become more relaxed but when it comes to the adherence to standards, I cannot and do not want to compromise. There are good reasons why labour and social standards exist, to protect people; they are not negotiable. Age restrictions for example: According to the International Labor Organization, the minimum working age is 15 years. According to Indian law, it is 14 years and in China, 16. Thus, 15 years for India and 16 years for China 16 as we always apply the stricter standard. So if high school graduates wait to reach a certain age so they can work, this age has to definitely be reached. One cannot compromise on 2 months or 2 days, otherwise soon it will be 6 months or a year earlier that they start working. One cannot agree to it or make compromises. 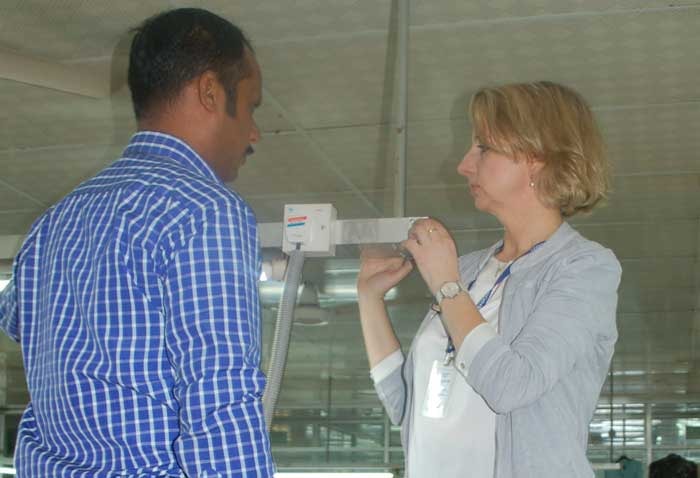 What is your advice for someone who would like to work in the area of CSR?

Get an impression of the actual situation, on site. This may be difficult but you have to just visit as many factories as possible. That is indispensable when working in this area. It is important to gather as much information as possible and to filter it. In terms of sources, you should use companies, NGOs and factories to get as many different perspectives as possible.

How much does one have to know about the production process?

The more, the better. I often experience that conflicts arise when talking about sustainability because the knowledge about production and supply chain are extremely limited. We experience this amongst other things when collaborating with stakeholders who often do not know about the cut-throat business environment. Of course, companies have to set themselves very ambitious goals but they should also be realistic.

And you probably have to travel a lot too?

Yes, you are constantly on the move. And you have to keep abreast of changes and developments in the countries and talk a lot with people on-site

Could you describe a typical day as a CSR manager if there is such a thing?

There is indeed no typical day. It is a potpourri of different tasks - developing strategies, lobbying, traveling to markets and visiting factories. Operational nitty gritty is part of it too; for example, audit reports have to be read and interpreted very carefully.

During the month of August FashionUnited will focus on Work in Fashion. For all reads on on the theme, click here.