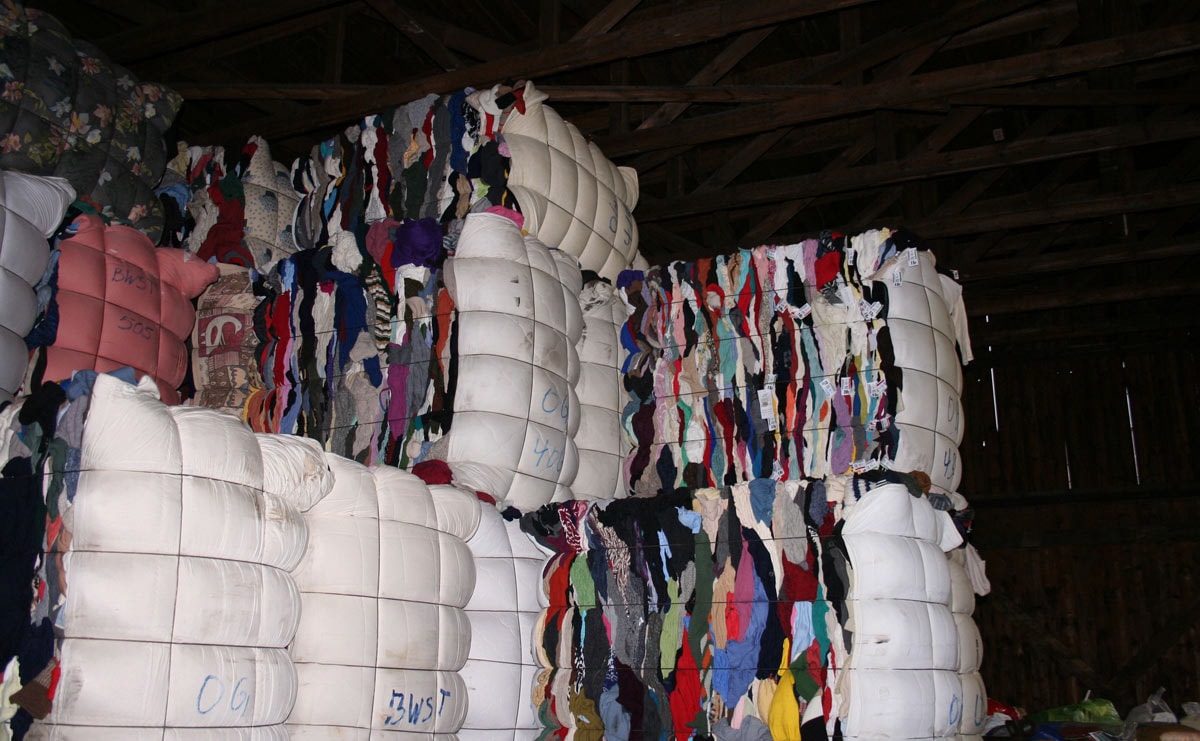 Recycling bursting at the seams: Used clothing industry is buried in textile waste

Berlin - Germany is proud of its textile recycling, and rightly so: Only a few countries worldwide collect their old textiles so consistently and use them for the second hand market or for recycling purposes. But even though the collected quantities have been increasing for years, the industry’s future looks bleak. Why is that?

The Federation for Secondary Resources and Waste Management (BVSE) called the industry together in May 2019 for its Annual BVSE Used Textile Day. Attendance was good; on the dais, environmental ministers and representatives of the Nature and Biodiversity Conservation (NABU), the Confederation of the German Textile and Fashion Industry and research institute Bayern Innovativ sat next to the chairman of BVSE’s Association for Textile Recycling, Martin Wittmann. Even media professional Wolfgang Grupp, owner of Trigema, is part of a diverse group of speakers. First conclusion: The subject of textile recycling seems to be very important at the moment.

But instead of patting each other’s backs because textile recycling has a long tradition in Germany and is therefore exemplary in international comparison, Martin Wittmann strikes a different note: “The industry is in a crisis that threatens its very existence,” he points out right at the beginning of the meeting. “There is little reason for joy or confidence,” he adds. What happened? Are Germans not collecting their old clothes any more after all? Or does everything end up in the trash? On the contrary: “Containers are overflowing, collection volumes are constantly increasing, warehouses are full of old textiles,” confirms Wittmann.

According to the BSVE, the volume of used clothing in Germany amounts to about 1.01 million tons per year, increasing steadily. And thus the problem textile recyclers face resembles that of the first hand fashion market: Too many products cause pressure in the market, thus putting prices at risk. “Lucky are those with large warehouses; the others are forced to sell their goods at any price to get rid of them. Prices have fallen by an average of 20 percent in recent years and there are no signs of a change in the situation,” says Wittmann.

Used clothes collectors and recyclers earn their money by separating old textiles into second-hand goods and textile resources that are then used for making rags or insulating material. According to BVSE survey results, it is difficult to sell old clothes: The business in Africa is suffering from tight liquidity, increased cheap new goods from the Far East and the partially continuing tariff increases. On the other hand, demand from Russia and other Eastern European countries is subject to high fluctuations, which does not make the overall situation any easier.

Poor quality is on the rise

The increase in quantity alone would probably be still manageable but in combination with increasingly poorer quality of the collected goods, the business has become cutthroat. For the BVSE, the reason for this is obvious: Textile discounters and fast fashion retailers are bringing increasingly poorer quality to the market in ever faster fashion cycles, which must be disposed of more quickly. Cheap synthetic fibres and fabric blends, however, have only limited re-use value, according to Wittmann. They are neither suitable for the second hand sector nor for making cleaning rags or for fibre recovery. “We have too much mass and not enough class,” sums up the chairman.

Unusables are disposed of at great cost

Other circumstances also pose problems for the industry. For example the ban on plastic bags in retail has had a detrimental effect on recyclers: Though intended as a law for better environmental protection, it has led to consumers throwing used clothing into collection containers without a bag. But because unfortunately, regular garbage ends up in used clothing containers as well, textiles get dirty or collect mould and lose further in quality. If the collected used clothes cannot be reused anymore, they have to be disposed of for a fee. In other words: “Recyclers have to pay out of their own pockets for non-recyclables amounting to about 200 euros per tonne that ends up in the incineration plant,” explains Wittmann. Second conclusion: In the end, collecting used clothes costs more than what they yield.

Hope through digitisation and new laws

According to Wittmann, the main problem lies with the garment industry and consumers. Just because fashion has to be so cheap, existing recycling systems have reached their limit. And there is no end to this development in sight. On the contrary: According to a Greenpeace study, 40 percent of clothes remains unworn in the closet, and Marie Kondo encourages us to finally part with it. Therefore, not the quantity of old clothes will shrink in the future but according to current predictions, it is rather the textile recyclers who will have to part with their unprofitable businesses. And then, what will happen to our old textiles?

All hope now rests on digitisation, which of course offers opportunities for increasing efficiency and reducing costs in this industry as well - for example through AI-controlled route planning when emptying the containers. The industry is also hoping for future legislation that could commit textile manufacturers, for example, to buy fixed quantities of recycled fibers. This is not unrealistic. From 2025, the new EU guidelines for a circular economy will be in effect that binds all countries to collect textiles separately. This is another reason why the amount of used clothes will continue to rise internationally, and by then at the latest, it will be necessary to know what should happen to all the textile resources. Absolutely certain is that they should not end up in landfills or the incinerator. Final conclusion: For achieving a circular textile industry, it will still take a lot more joint effort.

This article was originally published on FashionUnited DE. Edited and translated by Simone Preuss.