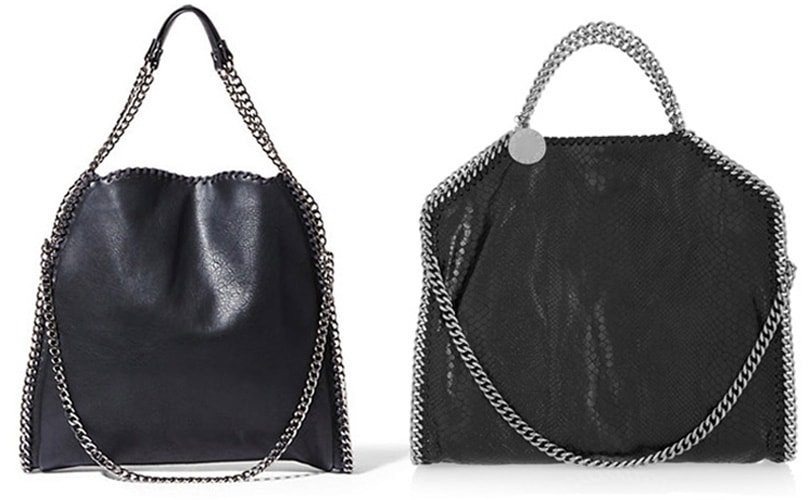 London - Steve Madden Ltd. has found itself in legal hot water once more this year, as the US label has been hit with another copyright infringement lawsuit. British designer Stella McCartney filed a complaint against Steve Madden in New York earlier this month for offering a "poorly made copy" of her iconic Falabella handbag.

The handbag in question, known as Madden's BTotally handbag is said to be a copy of one of McCartney's most "well-known and enormously popular" handbags, which was first launched in 2009. In the 22 page lawsuit, McCartney's lawyers accuse Steve Madden of "trade dress infringement, unfair competition, deceptive trade practices, trade dress dilution, and design patent infringement" coming from the "marketing and sale of a knock-off" of the designer’s Falabella foldover handbag, according to WWD.

The court documents point out the resemblances between the two handbag designs, include similar gunmetal frames, fabric inserts for the chain handles as well as the use of whip stitching. The complaint also stresses that poor reviews of the BTotally handbag from Steve Madden, which retails for 70 pounds could harm Stella McCartney's Falabella collection image, which retails from 475 pounds to 1,230 pounds and could led to a drop in sales as the result of confusion between the two bags. McCartney's lawyers are said to be seeking an injunction to halt the sales of Steve Madden's copycat handbag and "an accounting of Defendant’s profits."

This is the second time this year that Steve Madden has been accused of infringing on trademarks. Skechers USA previously filed a lawsuit this July again Steve Madden for copying its patented Go Walk range.

Image:Left is BTotally from Steve Madden, Right is Falabella from Stella McCartney