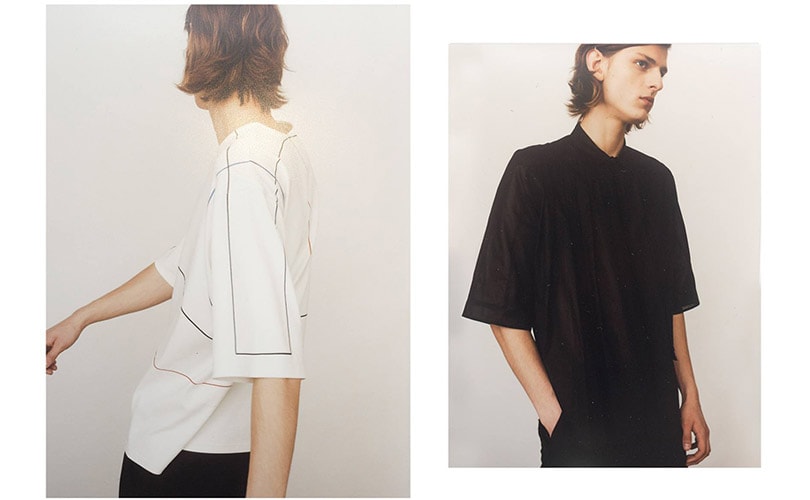 Oscar Murillo, Joe Bradley and Josh Smith acted as the foundation of the Spring/Summer 2017 collection presented by German designer Verena Schepperheyn. Informed by the artists’ works, the fashion designer built on the concept of impermanence, which is also based on the Japanese philosophy of wabi-sabi. Her aesthetic announces striking silhouettes and designs that frequently transcend the conventional gender boundaries, yet are always directed towards well-crafted men’s clothing. Large-scale prints from the artists’ paintings meet underwater realms and nautical-inspired clothing. By combining soft shapes with sharp lines she creates a balance between masculinity and femininity.

The Masters graduate of the ArtEZ University of the Arts in Arnhem thus thematises the processuality of her collections and further develops her imagery each season. This unconventional approach earned her the PREMIUM Young Designers Award 2016 in the Menswear category.

Previously, Schepperheyn has exhibited her menswear collections at London Collections Men, Amsterdam Fashion Week, Ljubljana Fashion Week and Paris Men’s Fashion Week. She also exhibited at Who’s Next 2016 as one of the designers selected by NJAL; was nominated for the German Design Award 2016; and she was awarded the WSGN Future Award 2016 in the ‘Avery Dennison Emerging Brand’ category.

You will find Verena Schepperheyn at PREMIUM Berlin from 28-30 June, Studio, PS-A09.