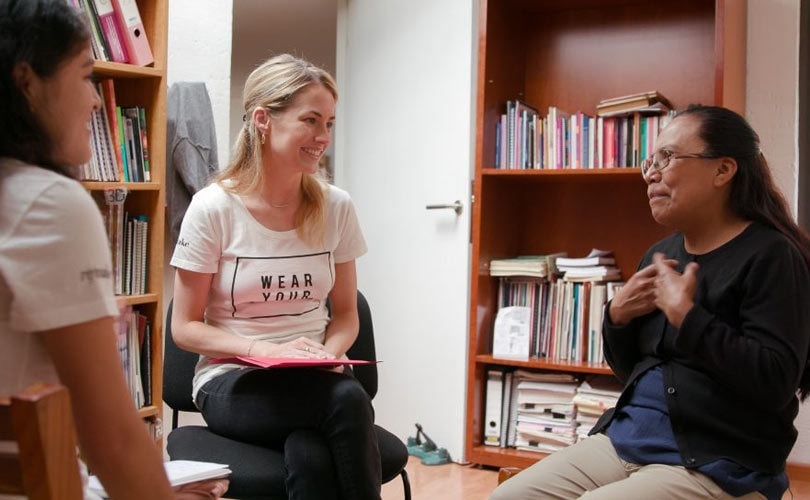 Parsons has elevated sustainability in its curriculum in recent years, and hosting the premiere of short film, Made in Mexico, is the result of one of the school’s many collaborations with external partners, in this case with Remake, the non-profit organization focusing on who makes our clothes. “We have a deep commitment that our faculty and students utilize fashion for social change, to make an impact in the world,” says Brendan McCarthy, Director BFA Fashion Design Systems & Materiality, in his welcome address. Four years have transformed a small class called Systems in Society into an entire pathway devoted to “shifting away from the idea that fashion is simply about a garment or a collection or a product but can be deeply committed in a co-collaborative manner to the issues, social and political, that we care about.” This is the third in Remake’s series of films documenting students, several from Parsons, visiting garment manufacturing hubs throughout the world.

Remake founder Ayesha Barenblat has over a decade of experience around human rights, sustainability, and transparency. She led brand engagement at Better Work, a World Bank and United Nations partnership to ensure safe and decent working conditions within garment factories around the world, and was head of consumer products at BSR, providing strategic advice to brands including H&M, Levis, Marks and Spencer, and Nike. She founded Remake to create “a groundswell of all of us coming together to make fashion a force for good.”

Says Barenblat, “Fast fashion is inherently violent. It’s violent to women’s bodies, it’s oppressive to black and brown bodies and to our planet. What we really need is a groundswell, a reckoning, an awakening, the calling out of the emergency that it is.” Remake makes these peace corps-like journeys, running contests at Parsons, Duke, and the California College of the Arts, to reward designers with the opportunity “to come with us and bear witness––because once you see a landfill, once the chemical stench of the dye house hits your throat, once you sit down and have a meal with women who make your clothes and she tells you what her life is like, you can’t unsee it, and you can’t unfeel it.”

Barenblat describes her short documentary as “a run-and-done shoot” explaining that not only are the garment-making communities difficult to navigate with cameras, but that while she was making the previous documentaries, Made in Cambodia and Made in Sri Lanka, she called in favors in the industry, but by the time she got to Mexico there were no manufacturers or brands willing to let her in. She has lost friends by calling out the industry’s failings but presses on regardless.

What surprised her, however, during this filming experience was how the garment workers came to find her. “Women from Juarez and Oaxaca,” she says, “up and down Mexico, some took planes for the first time, and they came to entrust us with their stories in a way that felt safe.”

The timeliness of the screening event is worth noting: 106 years ago this week New York City suffered its horrific Triangle Shirtwaist factory fire that claimed 146 lives, mostly women, Italian and Jewish immigrants. April also marks the fifth anniversary of the Rana Plaza disaster in Bangladesh when 1134 lives were lost in eerily similar circumstances. We’re still fighting for safety in Mexico, in Myanmar, in Ethiopia…

Women are the backbone of this industry

In 2018, the New York Times reported that 85% of fashion graduates from Parsons were women, with numbers from FIT and Pratt similar. The people entering this industry with enthusiasm are women, yet C-Suite data shows a gender balance shift. Men control the industry. On the other side of the supply chain, documented numbers record about 75 million women making our clothes––more, if we include sub-contracters working in the shadowier end of the supply chains. Women are the backbone of this industry. But bosses, supervisors, union leaders are all men. MeToo stories are as rampant in this field as any other, but they are just not heard.

My supervisors in the factory tell me I’m replaceable but I am my own unique individual and they won’t find anyone else like me.

Olivia, one of the interviewees, works in a maquila, which makes clothes for Walmart among other brands, amid conditions of violence and sexual misconduct, in order to provide for her daughter Veronica who is studying law. Says Veronica, “I want women to have more value in this country on their own accord. To not feel that their only way of life is to be a mother and work in unsafe conditions. Or to think that men have a final word over women and their rights.” 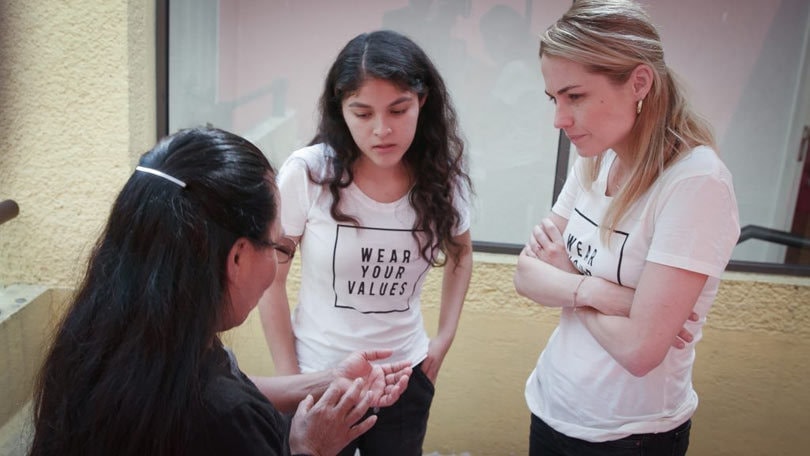 Reina, who began working in a maquila at 14 and is now an environmental and labor rights activist, has seen workers whose skin is discolored by chemicals or who have developed chronic illness due to their working conditions, and berates brand representatives who claim to be unaware. Ethical statements, codes of conducts in beautifully composed corporate speak released by global brands have no effect on the lives of these women. She says the brands are focused on their image not on changing the circumstances of their workers. There is no age minimum to work in maquilasE/em> where there are children as young as eight pulling loose threads out of finished garments.

Sajida, one of the students making the trip, does not view the women as passive victims: “They are actively fighting against the system that’s trying to keep them down.” Indeed one of the encouraging aspects of the film is hearing how the women look out for each other and band together in solidarity, winning small victories, to make daily life more bearable. But they feel entirely isolated from the consumers who wear the clothes they’ve suffered over. Fashion activist Amanda Hearst who also traveled to Mexico was struck with something one of the women said: “We’ve never had anyone to tell before now.”