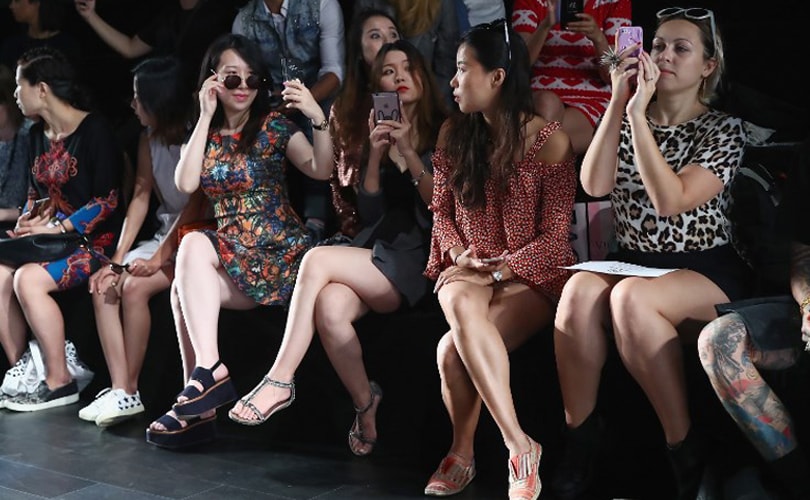 Fashion Week is as far in the rearview mirror as it is up ahead, and what better time to examine the distressing psychological phenomena that occur as a result of it galloping into our lives twice a year, and perhaps even strengthen ourselves for its next visit. Fashion is more democratic than ever before with bloggers stealing journalists’ spots, street cast models on runways, streetstyle photographers the new paparazzi, and members of the public winning tickets to runway shows. With so much gatekeeper-leapfrogging going on, if you still find yourself left out in the cold during fashion week, perhaps you have no one to blame but yourself. Maybe you were never destined to be a performer in the theater of fashion, but always to be sitting in a darkened row of the audience. Own it.

FOMO or Fear of Missing Out is so 2014. Foji and Jomo, Fear of Joining In and Joy of Missing Out, were shoved aside in the stampede to participate in every hashtagged moment of the last half a decade. Due to their shy, retiring, non-exhibitionist tendencies, Foji and Jomo were never given their moment in the sun. Then Hussein Chalayan, invited them back into the the conversation when he wrote in the show notes of his S/S18 collection, “The feeling of missing out from the exchange of digital information and the ‘ like’ culture is creating an increasing sense of despair among many of us…’ Basing his concept around ‘the lost individuals in a digital world…living with the opinion of others, but at the same time being empowered by the entitled state’ he offered us a wake-up call. From anyone else we might not have heeded it, but from him..? 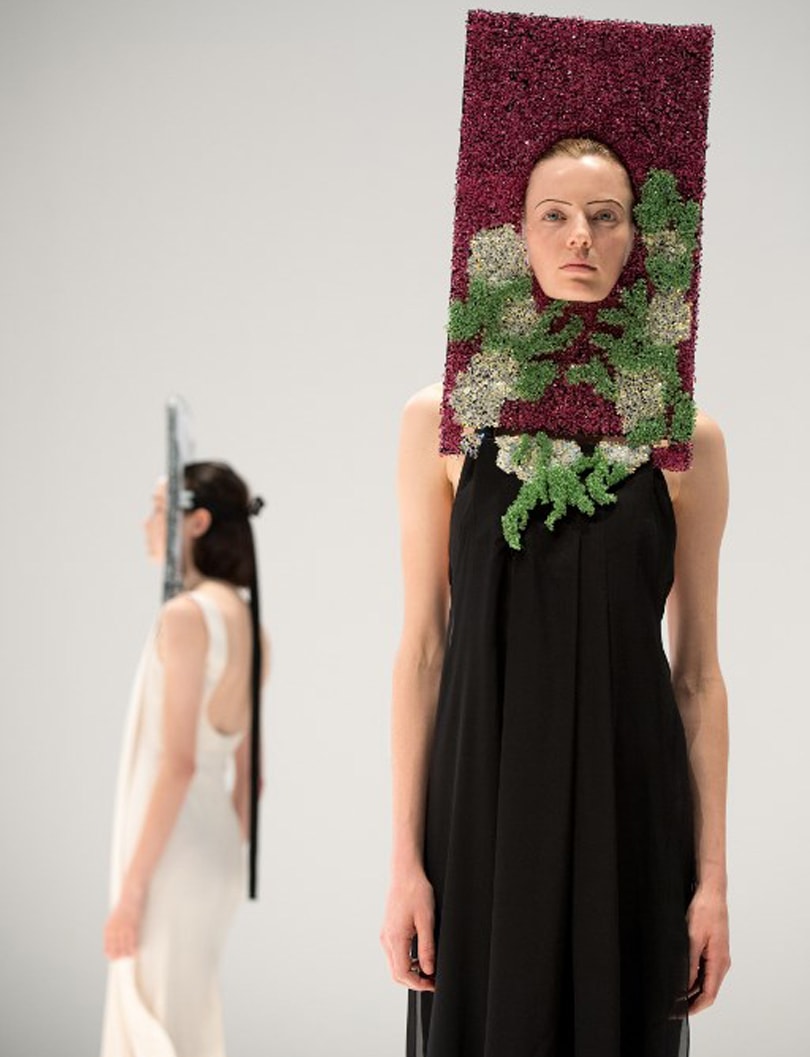 Instagram is social media’s fastest growing platform with about 700 million global users, 250 million of which are daily users. According to Forbes, ‘Instagram Stories is the current darling of the fashion world.’ The blink-and-you-miss-it nature of these posts that disappear within 24 hours recalls Cinderella’s coach turning into a pumpkin at midnight. The result is the feeling that we are constantly chasing, always tardy, and we’ll be left with no ride home. More connectivity does not mean more connections, chime the experts. We are a generation of oversharers all living our best life, yet the quest for the ‘experiential’ only seems to be getting more elusive. Who ever really used that word until three years ago?

While waiting for a fashion show to start during NYFW, and quietly recovering from the disappointment that no photographer thought my outfit warranted a photograph as I entered, I tried not to betray my shock at the front row of over-styled teens. When I could no longer handle the narcissism from the sheer number of selfies being snapped, I buried myself in a novel, an insular antidote to the outwardly mobile crowd. I was sitting next to a fashion graduate who revealed she was brand ambassador for a purse company. Discovering I wrote for an international fashion website, she morphed before my eyes into a Manhattan realtor, beautifully groomed but feral, pressing her card into my hand and pointing a green talon at her IG handle. All she needed to separate herself from the pack was one top grade listing in this lucrative but highly saturated environment in which followers replace zipcodes.

Eva Chen, Head of Fashion Partnerships at Instagram describes the fashion industry’s love affair with the site thus: ‘It’s one of the most mature, richest and most vibrant communities on the platform. People in fashion think in pictures. They’ve always thought about magazine editorials, campaigns or look books…’ 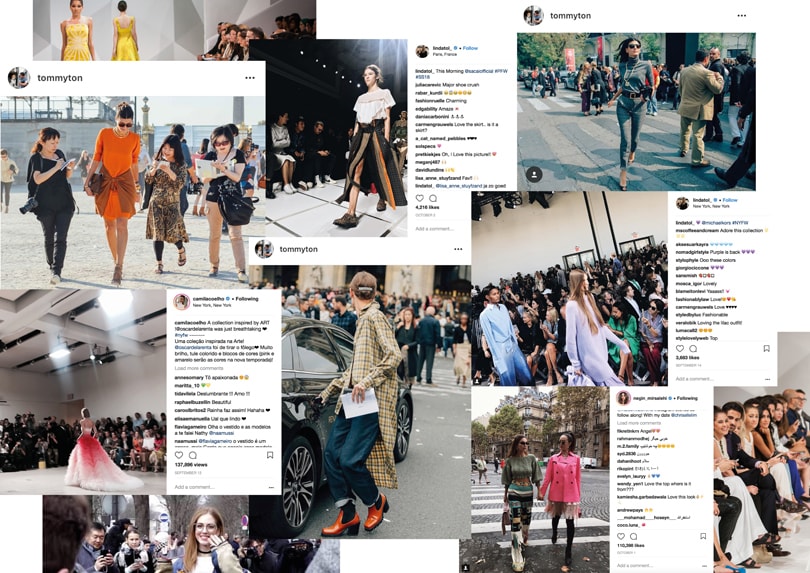 Does fashion need scholars or scrollers?

But this obsessive bombardment of visuals creates a tension, a numbing sensation, a trade-off. We claim to love it but what if a heart-eyed emoji is the closest we get to breaking out an emotion? Chalayan, the cerebral high commissioner of the fashion intelligentsia, who has also been at the forefront of blending technology into his collections, is posing some big questions for us to ponder while marveling at his tailoring: he’s asking us to distinguish between connoisseurship and viewership; to understand that suppression might be disguised as expression; and to recognize the qualifications of a masterclass over the superficial gleanings of an after-school program.

Much has been written about the lack of journalistic experience or background knowledge of today’s fashion commentators, namely bloggers. But as designers now craft collections and campaigns with a view to how they will appear on smartphone screens, and how they will gain the interest of Instagram influencers, the current crop’s knowledge is as relevant as anyone’s. It’s true the 18-year-old blogger might not know have known about Comme Des Garçon’s seminal Holes collection before this year’s Met exhibition but, now they have tracked down three pieces on Ebay and are posed stretched across a subway bench wearing them in an outfit of the day that will receive 4000 Likes by bedtime.

Living in the moment

I recently rewatched the film Unzipped, the behind-the-scenes template for the wave of fashion documentaries to follow, which showed Isaac Mizrahi during the development of his Fall 94 collection. It was a sharp reminder of what we’ve lost. The Mizrahi we watched was someone living in the moment, enjoying his creativity, wallowing in his neuroses, the whisper of a hashtag not even close to besmirching his orange taffetas. What was particularly quaint was to see him trudge out into the snow of New York City to pick up a print copy of WWD so that he could find out how his show presented the previous day had been received. Today we’d know that before the models had even walked the finale.

When every performance in the theatre of social media is open to all, and gratification is immediate, maybe it is what is hidden that becomes desirable again. Jomo parties? I’ll be first in line behind that velvet rope.