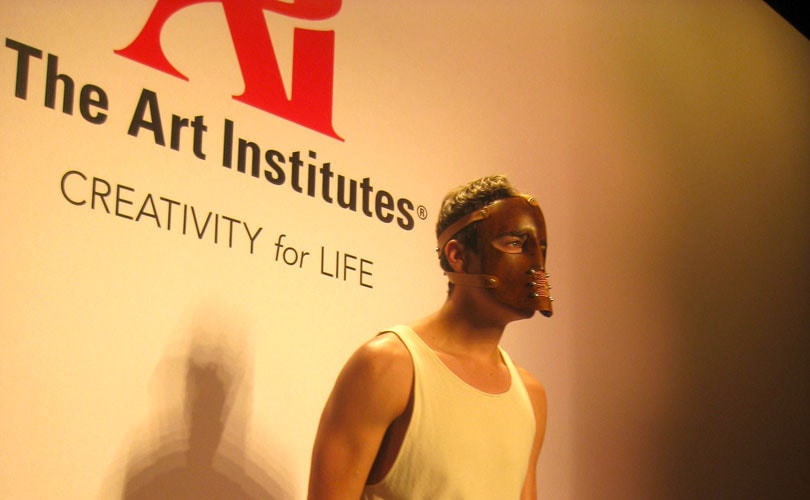 As we hurtle into the last few days of fashion week, it’s time to see what the Art Institute of New York City is offering up for Spring/Summer 2016...

Opening the show is engineer/designer Kiki Terrels’ sporty armor-inspired menswear. Fusing onto reliable cotton staples swathes of luxury leather and welded metal joints and hinges that mimic the movement of elbows and knees, he brings a dose of medieval swagger to the Moynihan Skylight runway. He may also have secretly consulted with discerning cannibal, Dr Hannibal Lector, for the finely crafted leather and metal masks.

Rujing Liu’s collection, Dear Mother, recalls her birth under the Chinese regime in which only 1 child is permitted per family. Rujing’s mother bore three, all girls, of which Rujing was the last. “Their last chance to have a boy,” she clarifies. The status of being born “against the law” but in a loving family has influenced Rujing whose primary concern in her designs is comfort––she uses the word often. Why all linen? “How it takes colors makes me feel comfortable.” The loose shapes recall the ease of her culture with their aprons and pouches and the barefoot models evoke the carefree shoeless play of childhood. “I see women in 7 inch stilettos, in clothes so tight they can hardly sit and I don’t find that attractive,” she explains before adding, “so uncomfortable.”

Put away your skinny jeans for a year or two and try something different!

Clothes maketh the man believes Matheus Rangel who works in an art gallery and dresses the chap who has his thinking cap on, who values substance beyond the surface. His “Druidry” collection celebrates a gypsy decadence and the centuries-old bohemianism of intriguing poet-poseurs.

The ripples of water, the movement of a breeze, these are the ethereal occurrences that Monica Suemitsu seeks to capture in her designs. Cocoon-like coats and layering pieces with gathered slivers that trickle down the front of a dress or creep up the center back convey a restful beauty.

Ebony Taylor’s sun-filled oceanside military posting to San Diego was the inspiration for a range of monochromatic swimwear including dramatic cover-ups high on Studio 54 glitz that is worlds away from sand-covered utilitarian fatigues. 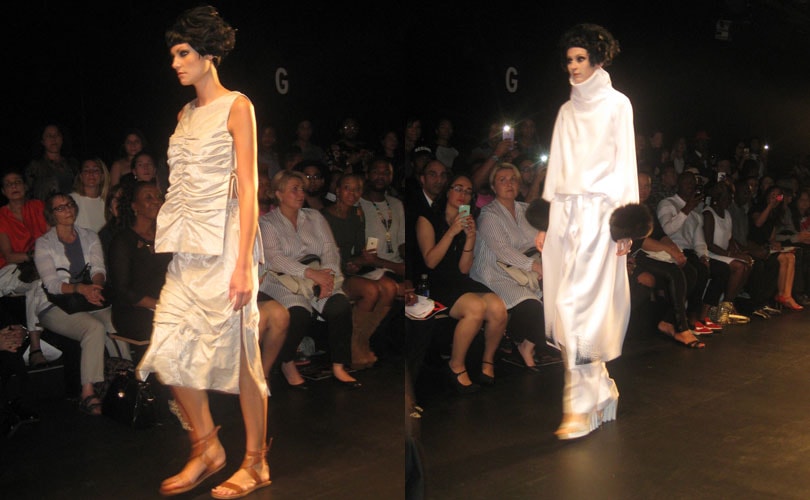 Ukraine-born Nataliya Matviska designed her collection in two hours. She hadn’t planned on auditioning for the show but someone told her it would be good for her résumé. Then again Nataliya has lived in 7 countries and speaks 6 languages so it’s safe to say she is used to thinking on her feet. “But I never thought I’d get chosen,” says Nataliya whose priority for many years was simply raising her family and who only ever drew to amuse her children when they were small––”rabbits, princesses, that sort of thing, never fashion.” Keeping it in the family, she is inspired by her perennially-chic mother and her collection represents glamour that doesn’t have to try too hard, with nonchalantly draped sportswear embellished with hand beading and Anna Karenina-style fur trims in that most polished palette of black and white.

“Put away your skinny jeans for a year or two and try something different,” says Yurie Lim who explores a charming array of trouser alternatives in his collection entitled “Things I don’t Show.” Although he tends to hide his emotions from the world, he says that by employing patchwork so brazenly he is breaking this code and drawing attention to––honoring even––the fragile, the weak and the overlooked. Many of his fabrics were picked up in the Lower East Side’s Orchard Street, a fragile remnant of a once-thriving fabric area in New York. Also inspired by the Japanese practice of Indigo quilting, the result is a fresh mix of once-prized yet somewhat forgotten treasures from near and far.

Deron Shields has already had a brush with fame, having appeared on TV show 24 Hour Catwalk as resident tailoring expert. For his runway collection however he has honed his focus further, on the construction of the very fabric with which he would proceed to tailor. Onto a cotton base, meticulously sewn strips of cloth in subtle variations of pink create a dégradé textile that’s slightly Chanel in appearance which he then took to with his well-sharpened tailoring scissors to create frothy knee-length confections reminiscent of Degas’ danseuses.

Inspired by the 70s sci-fi film Fantastic Planet, Melissa Gonzales combines psychedelic textiles into oversize streetwear shapes then adds spiral beaded pasties like a glitter-happy alien hoping to be spotted on earth by his posse back on home planet–-sequins flash, iridescence shimmers, and everything’s brought back to land with hazard-orange chunky rib knit. 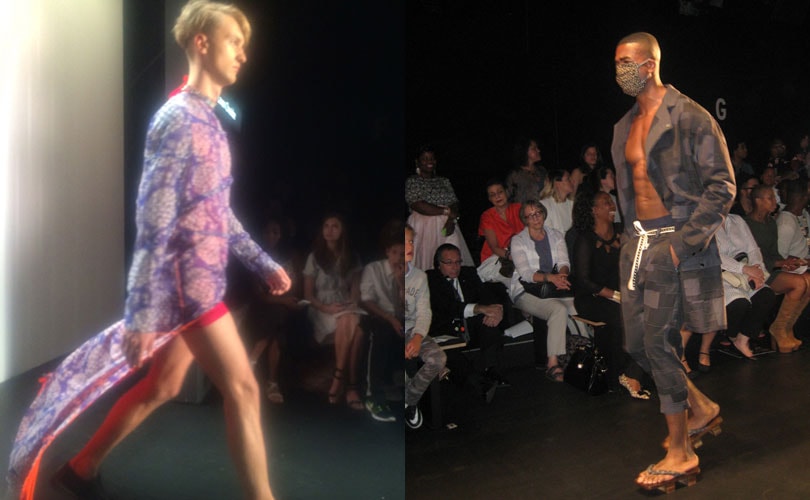 Although fashion-obsessed since the age of 6, Eric Jernigan almost went the route of a Broadway career instead and describes the process of creating his collection the way you “might write a play or compose a musical: with the character.” His multilayered chiffon dresses have stage presence and are made to be worn in front of a wind machine but their athletic-inspired hot pink accents suggest his starlet can run in heels.

Closing the show with a manly sweep of satin charmeuse that will whip you from your front row perch is rigorous upcycler, Lavan Chxeidze whose menswear serves to remind us of everything that is wrong with today’s fast fashion catastrophe––by representing the polar opposite, Lavan reuses everything––a piece of textile saved while doing a workshop at the MET during the Alexander McQueen show was first made into a pillow for his mom but he re-repurposed it into a vest for tonight’s runway; a section of a painting on canvas becomes the yoke of a jacket. The pinstripe that he patiently hand stitched together into a bolero was unearthed in the school’s resource room, overlooked by hundreds of students previously. A stunningly constructed corset, made from kimono fabric, reminiscent of early 90s Vivienne Westwood is then flipped upside down and worn as a hip hugging girdle.

“The story of Christopher Isherwood, an unhappy closeted Englishman who goes to Berlin and experiences freedom to express himself before that freedom is abruptly murdered by the Nazis made such an impact on me,” says Lavan who was born in the Republic of Georgia. The collection’s styling evokes a cabaret performer in fear for his life who flees his lodgings, piling clothes onto his body, tearing some, trailing others, costume jewelry flying. Identifying himself as a dreamer, Lavan chose to bead the outline of his face onto the back of a vest so that the wearer will know he is wearing something that is both upcycled but special. At a time when brand identity has become largely meaningless and everything looks the same, this attempt to bring the personal touch back to fashion is something quite precious.