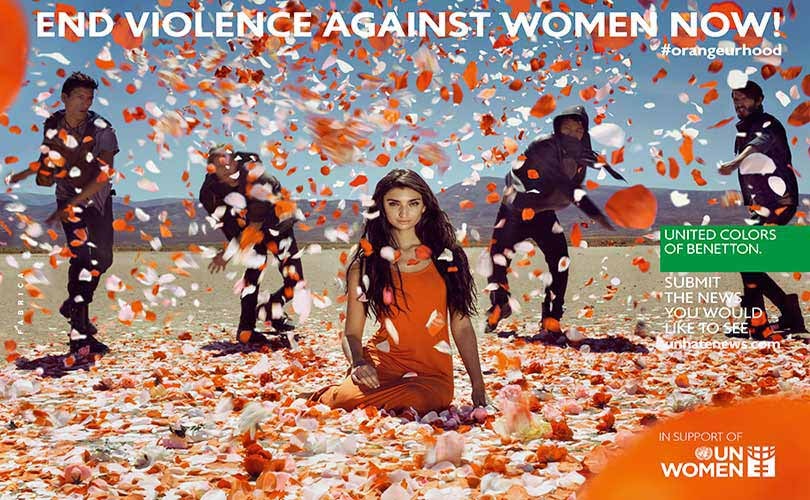 Benetton teams up with the UN to end violence against women

Italian fashion group United Colors of Benetton has partnered up with the United Nations and has launched a new institutional campaign to mark November 25 – the International Day for the Elimination of Violence Against Women.

The goal of their campaign, which was created by Fabrica the group' s communication research center, is to promote international awareness to bring around social change and develop concrete actions to support women and educate young men.

“The global campaign, seeks to remind the world that women should no longer have to put up with discomfort, suffering or a life of misery: they should be able to choose to be themselves and not what their partners, men, religion or society would like them to be,” said the group in a statement.

Benetton, who in the past has been known to use provocative images to raise attention for a cause has once again used a striking image for this campaign. The campaign image depicts a group of men stoning a young woman with a shower of orange flower petals, which refers to an Italian proverb that women should never be hit, even with flowers.

“We have always focused on socially responsible communication initiatives and were happy to lend our creativity as part of efforts to raise awareness on the issue of violence against women,” commented Erik Ravelo, head of social engagement campaigns of Fabrica. “We chose a flower instead of a stone to say no to a human rights violation that causes permanent physical and emotional scars and that is reflected in all social classes."

Phumzile Mlambo-Ngcuka, Executive Director of UN Women added: “We know that the pandemic of violence that affects 1 in 3 women and girls can be stopped. But we cannot do it alone. We need partners who help us raise awareness and promote a culture of zero tolerance toward this pervasive human rights violation. Benetton is such a partner. Their campaign, launched on the International Day to End Violence against Women supports our global efforts. We appreciate this commitment to the cause.”

The new campaign is the latest move by the Italian fashion company in its ongoing collaboration with the UN and its numerous connections, which first begun nearly 20 years ago. November 25 is the official start of the Orange Days, a 16 day initiative launched by UN women, which ends December 10 and celebrates the struggle for women's rights around the world.