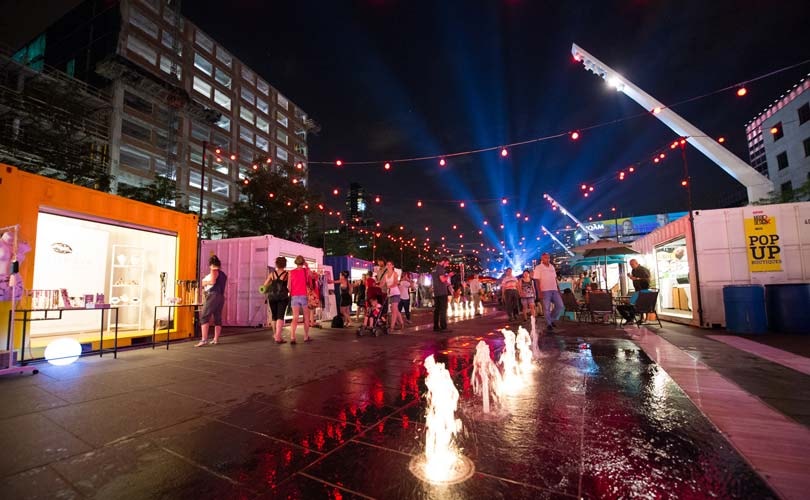 Big names in fashion and design gather in Montreal

The 2017 Fashion and Design Festival is the biggest outdoor fashion and design event in North America, with an international reach. For the last 17 years, Groupe Sensation Mode (GSM) has produced and conceived the event, which attracts the leading figures in fashion and design to Montreal. Running from August 21 to 24, the 2017 edition of FMD Talks will kick off the festivities. The conference series features some of the most influential and creative minds from today's global scene, and promises to be a highly stimulating and inspiring experience. Commissioner of FMD Talks and professional journalist Stephane Le Duc will host these unique encounters for the third consecutive year.

Since its inception, GSM has aimed to foster an inclusive dialogue around fashion and design. "We love making the Festival a place where fashion, design, consumers, retailers, designers, and the spirit of the streets can come together. We believe that the most innovative ideas arise when the streets influence fashion, and fashion takes hold of the streets. That's why we're offering the public a chance to meet and hear speakers with the most fascinating stories," explains Chantal Durivage, Co -Founder and EVP of Creative Development I Products I Research I Watch at Group Sensation Mode.

2017 SPEAKERS: A Wealth of Creativity

What do Jean-Paul Goude, one of the world's greatest publicists and designers, whose clever, sumptuous productions evoke the wildest of fantasies and advocate for diversity like none other; John Londoño, photographer, photo director and director; Michel Robichaud, Québécois fashion pioneer; Francois Cardinal chief editor-writer of La Presse; and famous architect Pierre Thibault have in common? have in common? Each of their journeys is filled with rousing and unique tales that have led them to top, which they are gracious enough to share during FDM Talks.

The same goes for Olivier Theyskens, artistic director for major luxury design houses and stylist to the stars; Anat Safran, Curator and Artistic Director of Jerusalem Design Week; Luca Marchetti, curator, consultant for luxury design houses and brands, and a specialist in semiotics; Thierry Maxime Loriot, author and commissioner of successful Exhibitions; Zaldy Goco, NYC -based designer (Lady Gaga, Cirque du Soleil); Marie Saint Pierre, President of the fashion house that bears her name and a true fashion icon in Quebec for the last thirty years, of whom we are very proud; Jacques Nantel, marketing expert; and the Metropolitan Fashion Cluster (mmode), who will present their experiences, sources of inspiration, and accomplishments which have made them the unmistakably, influential figures in fashion and design that they are today.

To Attend the FMD Talks

The FMD Talks will take place in the Wilder Building and the Montreal Museum of Fine Arts. 125 passports that grant access to all of the conferences are on sale for $175 on Eventbrite. Individual tickets for each of the talks are also available online. For more information on the Fashion & Design Festival and the full schedule for FMD Talks, go to http://www.festivalmodedesign.com/.

Groupe Sensation Mode is committed to promoting creativity, to offering a prestigious showcase for big names from here and elsewhere, and to immersing its audience in a universe of audacity and aesthetics, ultimately creating close, long-lasting, and authentic connections. As such, FMD Talks is a rare opportunity to discover or rediscover the journeys, expertise, and anecdotes of those who have made, and still make, fashion and design the exciting and stimulating disciplines that they are.

Native of France, Jean-Paul Goude is one of the world's most prolific publicists. His unparalleled vision has made him a key reference in the fields of photography, fashion, dance, and commercial film. His wealth of clever creations has had an impact on the collective imagination since the 1960s. This creative genius has photographed Grace Jones, Farida Khelfa, and Kim Kardashian, among others. He has enhanced creations by Azzedine Alaia and Chanel, and has designed images for Perrier, Citroën, and Galeries Lafayettes that remain unforgettable. Eager to work on more extraordinary projects (Kenzo-H&M, Lacoste, Roger Vivier), Jean -Paul Goude is a force of nature.

A Young Belgian with an astonishing career, Olivier Theyskens has already led a thousand and one lives. From being a stylist for Madonna, Nicole Kidman, and Emma Watson, to name just a few, to being artistic director for Rochas, Nina Ricci, and Theory, his career path is impressive. After studying fashion design, he launched his own brand and captured the interest of the media and international distributors during Fashion Week in Paris. His interest in the stage has led him to create costumes for The Smashing Pumpkins, the Theatre de la Monnaie in Brussels, and the New York City Ballet. This summer, he was seen unveiling his brand's spring -summer 2018 collection on the main runways of the Paris Fashion Week.

John Londoño, a photographer, photo director, and music video director from Venezuela, lives and works in Montreal. Passionate about the various forms images can take (virtual reality projects, fashion editorials, portraits, feature films), he combines this interest with art, music, advertising, and fashion. His innovative work has been picked up by The Guardian, NME, and Les Inrockuptibles and has been featured in campaigns for Virgin Mobile, Rudsak, and Adidas. He has also collaborated with renowned artists such as Grimes, Sigur ROs, Crystal Castles, and Charlotte Cardin.

Renowned fashion designer Michel Robichaud is a true pioneer of Quebec fashion. As soon as he launched his first haute couture collection in the early 1960s, he quickly found himself surrounded by loyal top-tier clients, including Hollywood icon Elizabeth Taylor. This year, the McCord Museum celebrates his exceptional talent by highlighting his Air Canada flight attendant uniforms at the Fashioning Expo 67 exhibition. Michel Robichaud also created the first perfume from Quebec: Brunante

Co-authors of Et si la beaute rendait heureux [What if Beauty Created Happiness], these two speakers are united by their common fascination with the environment that surrounds us. the city and our society.

Pierre Thibault. a famous Quebec architect at his eponymous firm, has always let his sensitivity to the exceptional power of Quebec’s changing seasons guide him, letting human and natural forces shape his unique design process. His various projects in Paris, New York, London, and Milan have earned him numerous awards, including the Prix d'excellence de l'Ordre des architectes du Québec. and have contributed to his world renown.

Editor-in-chief of La Presse, François Cardinal marvels at architects' work. A communications expert, speaker, and TV and radio commentator, he is respected for his involvement in the community.

NYC-based Zaldy Goco is the poster child for the city where audacity and creativity triumph. His talent and unique vision of modern design led him to design for Britney Spears, Lady Gaga. Beyonce, Jennifer Lopez, and even Michael Jackson's cancelled 2009 This Is It tour. His remarkable work even earned him an Emmy Award nomination for costume design. He has also collaborated with Gwen Stefani for nearly four years and is the designer behind her L.AM.B. brand. He is now working with Cirque du Soleil to design fantastic costumes for the shows Michael Jackson ONE and, most recently, Volta.

Curator and artistic director Anat Safran studied at the École supérieure des arts décoratifs de Strasbourg before founding and becoming the Artistic Director of Pecha Kucha. a preeminent cultural event in Tel-Aviv. Since 2016, she has been known for her role as Curator and Artistic Director of the Jerusalem Design Week. Inspiring and passionate, she demonstrates how design in Israel flourishes despite the absence of a real industry and the lack of resources and exhibition venues in Israel.

Fashion designer and President of Maison Marie Saint Pierre, this year, Marie Saint Pierre celebrates the 30th anniversary her career. Constantly inspired by the evolution of various fashion trends, she founded a brand with a strong artistic identity, recognized for its innovation and know-how both here and abroad Her sensitivity to social and environmental causes has prompted her to stimulate a movement that goes far beyond the clothes she designs. Her favourite materials are eco-friendly, and she founded the Sous Zero project. which focuses on helping children in need. 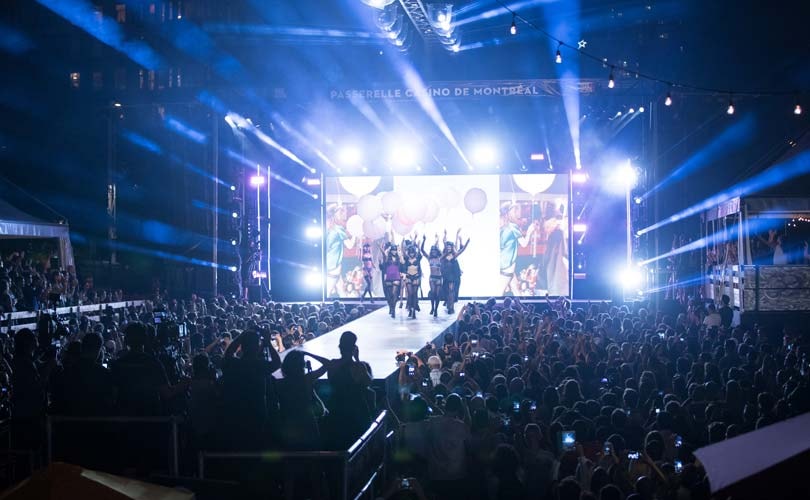 For more than a decade, fashion has been featured in major international museums. Some exhibitions, such as those by Jean-Paul Gaultier. have truly become cultural phenomena, and garner unprecedented interest. The two speakers will analyze the public's fascination with these exhibits.

Semiotics specialist Luca Marchetti is originally from Italy. Passionate about fashion and design, he also curates for international exhibitions and events related to his two passions, in Geneva, Lyon, Berlin, and even Moscow. In parallel to his academic activities, he is also a consultant to luxury design houses and brands.

Born in Quebec City, Thierry-Maxime Loriot has worked in the fashion industry in New York, Paris, and Milan for more than 10 years. A successful exhibition commissioner, he is also the author of all of the works that accompany his exhibitions. Most notably, he is behind the famous exhibition-phenomenon at the Montreal Museum of Fine Arts, The Fashion World of Jean Paul Gaultier: From the Sidewalk to the Catwalk, which has drawn more than two million visitors worldwide. He also orchestrated the Peter Lindbergh: Different Vision on Fashion Photography exhibition, an homage to the career of one of the most famous fashion photographers, and curated Viktor & Rolf: Fashion Artists, presented at the National Gallery of Victoria (Melbourne, Australia) and Love Is Love: Wedding Bliss for All á la Jean Paul Gaultier.

Business Lunch Talk - Trade Exchanges: Cross-border Growth Opportunities As part of its Export Project, mmode, the Metropolitan Fashion Cluster, invites you to attend a panel on trade exchanges between Canada and the United States. Renowned panellists from the Montreal fashion industry and economic and political sectors will share their experiences and discuss current issues, such as NAFTA's possible renegotiation, cross-border e-commerce, and tourism’s impact on retail trade.

Business Lunch Talk - Sales in the Amazon Era Hosted by marketing expert Jacques Nantel, Professor Emeritus at HEC Montréal, the Business Lunch Talk will focus on the topic of online sales, and on the consequences that these new purchasing practises have for traditional commerce. While it may be hard to believe, it turns out that more than 10% of Canadians' clothing purchases are done online. Amazon alone controls more than a quarter of this trade in Canada and 50% in the United States. With the recent setbacks that have affected several retailers, including Sears, what will remain for traditional retailers, and who will come out on top?

The complete schedule of the Fashion & Design Festival will be unveiled on July 19th during an exclusive event.

About the Fashion & Design Festival

The Fashion & Design Festival is an annual celebration of creativity held in downtown Montreal. Founded, conceived, and produced by Groupe Sensation Mode, this unique event offers a variety of activities including parades, multidisciplinary shows, live creation, musical performances and real-time design. For four days and four nights, nearly so shows featuring renowned designers and leading national and international fashion brands will be presented. Make-up artists, hairdressers, models, stylists, and musicians contribute to the ambiance. A true platform for fashion, design, music, and shopping trends, this event is the biggest happening of its kind in North America. Visit festivalmodedesign.com for more information.

For 17 years, Groupe Sensation Mode (GSMA hds been designing and producing major experiential fashion and design events in Quebec, Canada, and abroad. Recognized ds the producer of the biggest fashion events in Canada, including the Fashion & Design Festival that it has put on for 17 years, GSM has also created unique concepts like the Fashion Theatre (on stages in Berlin, Tokyo, New York, and London) and the Fashion & Opera Runway Show in Los Angeles. These innovative events serve as dn international showcase for local designers’ creativity and talent.