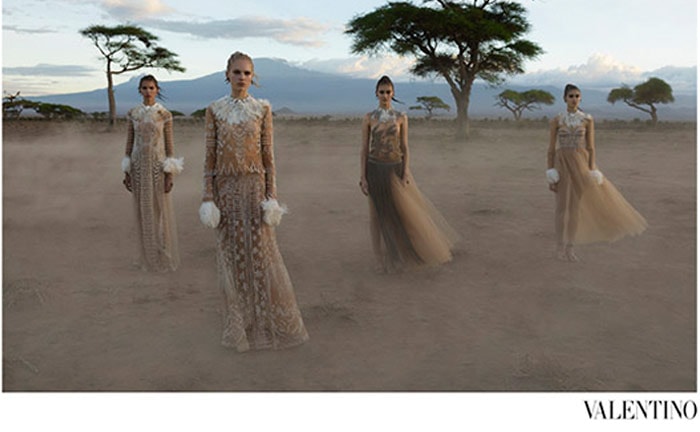 I was struck by the Valentino Spring/Summer 2016 ad campaign, photographed by National Geographic photojournalist Steve McCurry, set among the Maasai of Kenya’s Amboseli National Park. The Valentino team were apparently caught in a dust storm during shooting, but I wondered if a bigger storm wouldn’t descend on them when the campaign gained press. At the eye of that storm? Cultural appropriation.

However, the designers, Pierpaolo Piccioli and Maria Grazia Chiuri, were prepared: “Our emotions about African culture, the idea of beauty, the interaction between different cultures, the idea of tolerance, this is the message we wanted to deliver...That’s why we wanted to shoot in Africa with Steve McCurry. He’s not a fashion photographer; he’s a culture reporter. We wanted to shoot not a fashion vision [of Africa], but more of a cultural vision — and not in a studio with an elephant.” 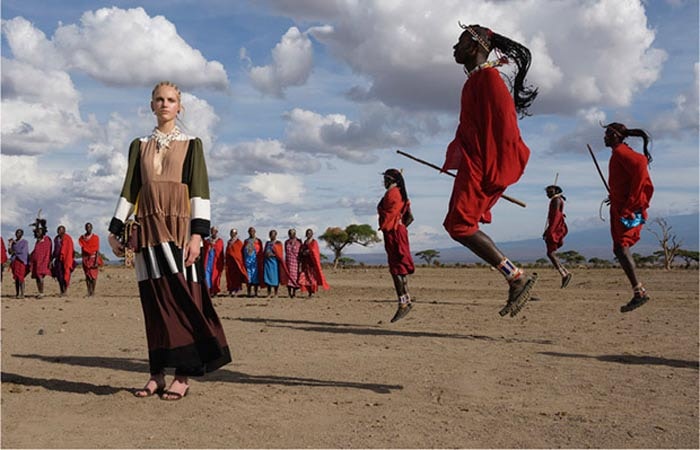 But the designers had already been in trouble for failing to bring their love of Africa onto their runway, by primarily casting white girls adorned with cornrow hairstyles walking to the beat of the bongo drums. There’s no denying the breathtaking beauty of McCurry’s photographs. There’s also no escaping the fact that those who will wear these dresses are not living in dirt huts down lonely tracks in an arid terrain. Something smells a little off. Other decisions could have been made.

More than anything, it’s disappointing because it provides more opportunity for the use of that annoying catch-all term, cultural appropriation. Just what we need as a society: tyrannical labeling, pigeonholing and bellowing out of superiority complexes. Stay in your lane is the message behind much of the noise. Or else.

Whatever happened to the notion “Imitation is the sincerest form of flattery”? Are we too permanently aggrieved to succumb to flattery anymore?

London label Kokon To Zai recently came under fire (under fire is always the term that precedes cultural appropriation) for their Shaman Towelling Sweatshirt, which retailed for 600 pounds sterling. Descendants of the Inuit shaman who created the garment almost a century ago, from caribou skin that he covered in holy symbols to protect himself against drowning, cited Inuit sacred laws which prevent profiting from such items. Again, proper decision-making might have saved the day. If a designer is paying homage to a people or race, the least they might do is release that information publicly, to educate, create awareness and to demonstrate respect.

But in this case, another, more pressing concern might be: If you are going to lift a direct copy of the garment in question, what is the point of calling yourself a designer? 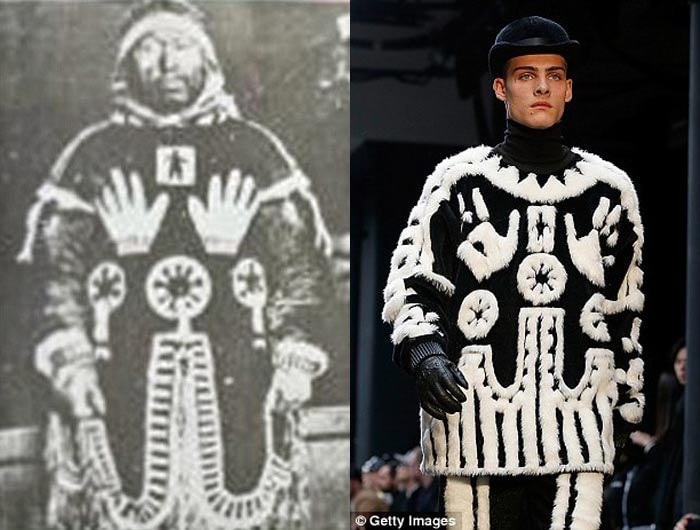 We are all products of our environments––environments that, for good or bad, we were born into without strategy nor opportunity for negotiation. Just the lottery of birthplace. My religious symbols weren’t your religious symbols, the political strifes of my land weren’t yours, nor should they be. Religion is best worn on the inside in my view, where no one can steal it from you. Spirituality is by its very name, of the spirit, not of the sartorial. Clothes do not maketh the spirit, they maketh the man. Outward representation of spiritual beliefs in a series of woven threads, colors and embroideries shouldn’t be treated like intellectual copyright. And don’t get me started on countries and their flags... 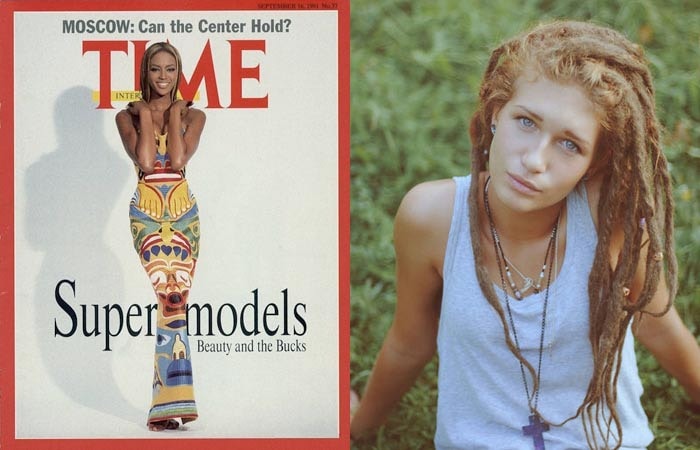 People’s traditions, histories and customs are worthy of respect, but also curiosity. Garments, hairstyles, and jewelry, however, are their benign material representations. Cultural cross-fertilization has brought us to where we are today, in terms of the medicine we have access to, the science we trust, the foods we enjoy, the religions we practice––all of these we approach as individuals, not as groups. We rejected the haughty pronouncements of exclusive cliques at high school but somehow fall prey to them in adulthood, for fear of being labelled racist or insensitive. In other ways, we’re perfectly capable of thinking for ourselves. Although born Irish Catholic, I might worship at a Buddhist altar in my home every morning, do some yoga, before joining my friends at an Asian fusion restaurant for lunch followed by an evening of salsa dancing.

In my late teens I attempted to cultivate dreadlocks. I regret it now only because my poor Celtic hair has had to be a martyr to that decision ever since. The attachments––religious, cultural and symbolic––to dreadlocks within the black culture did not hold much sway in my small rural part of the world. I had no idea. I just wanted to be different from the people around me. Long after, when I’d changed my hair again, met an actual black person, then many more, listened to their points of view, did I understand the cultural significance of that hairstyle. I enjoyed the education, and consider myself lucky to meet people who educate me on a regular basis. Still, the hairstyle was significant for me too, even though my story was different. I wasn’t out to be an ambassador, except for myself, who I was still getting to know. 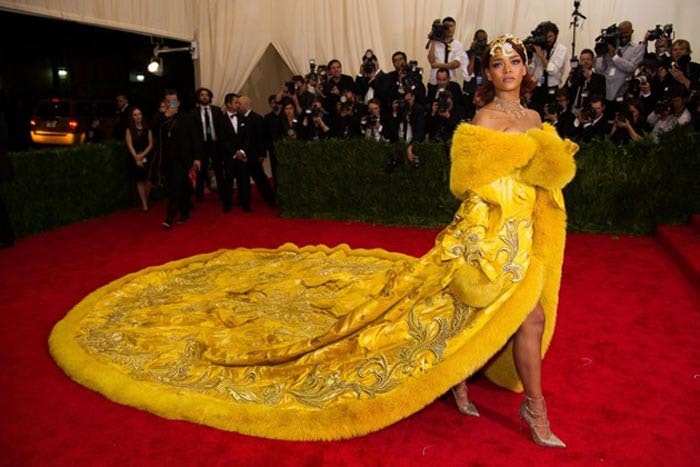 Art and design have always benefitted from the intermingling of cultures and this should continue, especially during this most divisive of times, up against the constant and shrill barrage of internet outrage: Check your privilege! Cultural tourist! Channel surfer!

Some things are clear. Some less clear. Diversity in model casting should no longer be an issue, whether the designer is inspired by Africa or not. China; Through the Looking Glass, the Met’s successful summer exhibition had the potential to be one long celebration of cultural appropriation. Instead, it was a stunning catalogue of what the world has gained from looking at the beauty of one ancient culture. Sometimes creativity crashes blindly through confines, provoking scandal, touting rejection. But when common sense returns, some direction becomes clear: Credit your inspirations. Pay local artisans. Collaborate with communities. Explore, don’t exploit. Come together, don’t pull apart. But staying in your lane represents moving backwards.

The fashion of their forefathers

The purity of indigenous cultures is not under threat because we bring them into our creative pursuits. They are under threat if we don’t. We’re not invaders barbarically riding roughshod through villages with spears in the air. Falling in love with an embroidery or a basket-weaving technique might lead a designer to fly his team to visit a place, perhaps inspiring a curiosity to learn the language while there, then a move to go into business with locals, maybe even offer an opportunity to fall in love with another human being, to get married, have babies. Cultural preservation: the stuff of life, not death.

It seems fitting to end with the note that the first major U.S. exhibition featuring Native American fashion, Native Fashion Now, is currently on view at the Peabody Essex Museum in Salem, Massachusetts, after which it will travel to Tulsa, then on to Oregon, before ending in NYC, where I will await it with anticipation. The exhibition celebrates a selection of Native-American designers creating contemporary fashion, using the skills passed down from their forefathers, but making them relevant to meet the demands of the modern consumer. 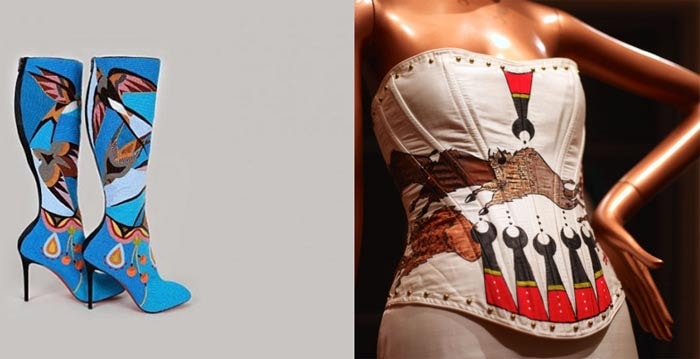