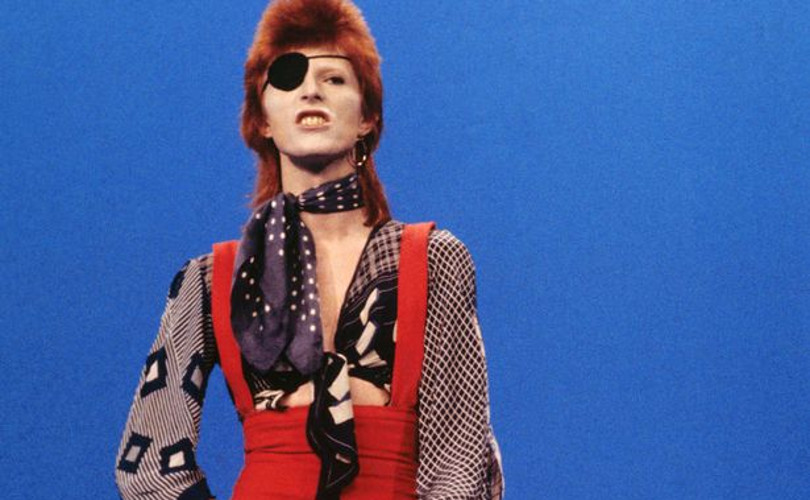 Reading the tributes these past few days to David Bowie, in particular those extolling his fashion icon status, it occurs to me with sadness how little he features in my classroom. Or, more to the point, how little a presence he seems to have in my students’ lives. (I will refer to Bowie in the present tense because his influence on fashion isn’t going anywhere.) Part of the fashion vernacular for over forty years, his trio of early personas alone––Ziggy Stardust, Aladdin Sane, The Thin White Duke––are as outrageous and relevant today as when he birthed them. Not to mention the more traditionally suited and booted Bowie of later years. So I shake my head and wonder why don’t I hear his name on their lips more? Why doesn't he trickle onto their sketchbooks, or at least their Pinterest pages?

One semester, frustrated with hearing the same tired inspirations from my fashion students, I provided for them a list of themes from which they could choose one to design a collection around. One option on the list was Ziggy Stardust, Undercover Spy. The best fashion often plays with juxtaposition, so I hoped this two-parter title would allow them to swoop in and pluck from the shiny theatricality of his stage wear like the magpies they are, while also tempering the urge to recreate his costumes by being forced to disguise him or put him incognito.

Only one student picked this title from the list. Still, it was progress. However, upon closer examination, I found that this eighteen-year-old had blithely latched onto one of the first images her Google search had coughed up. It was of Kate Moss as Aladdin Sane on the cover of Vogue. To add further insult to injury, the student, believing Kate’s homage to be the Ziggy in question, was using the pronoun “she” while speaking about him. The task I had undertaken was clearly more daunting than I had anticipated. 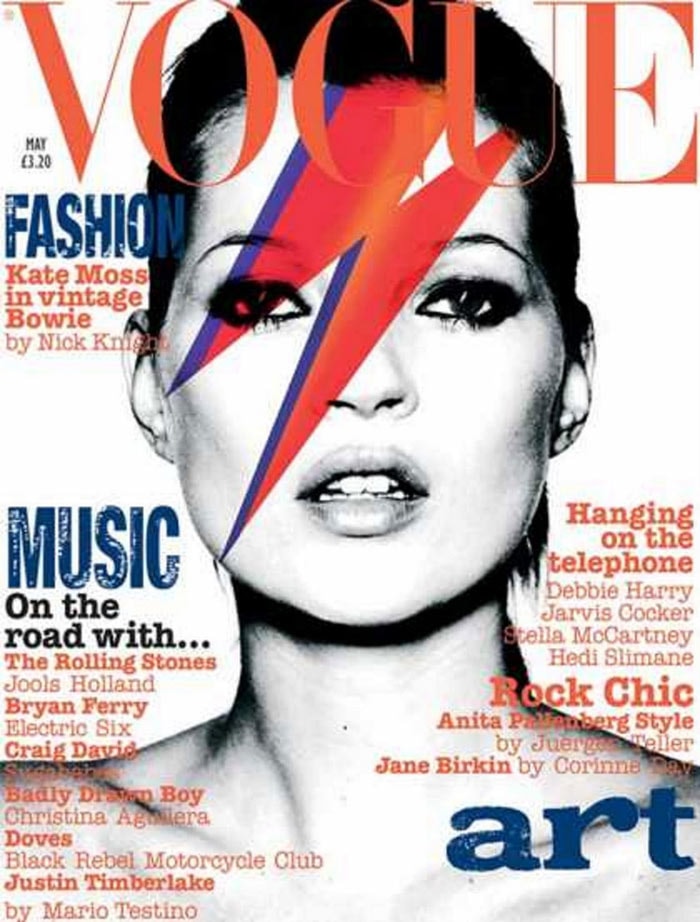 All was not lost. Some months later, I encountered another student, this one already a devoted Bowie fan, who voiced determination to create her senior collection based on his brilliant collage of looks over the years. I advised channelling his revolutionary renegade spirit, and against being too literal. She created direct replicas of his original Kansai Yamamoto costumes, just in different fabrics. She had been too reverential, unable to see past her adoration of Bowie to truly tap into the wealth of possibility that he embodied.

Then again, Riccardo Tisci from Givenchy didn’t stray too far form his source material either with this jacket from his Spring 2010 runway. 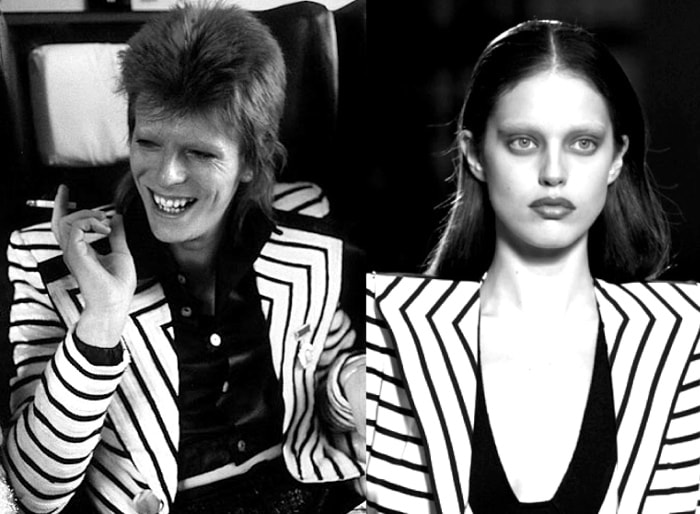 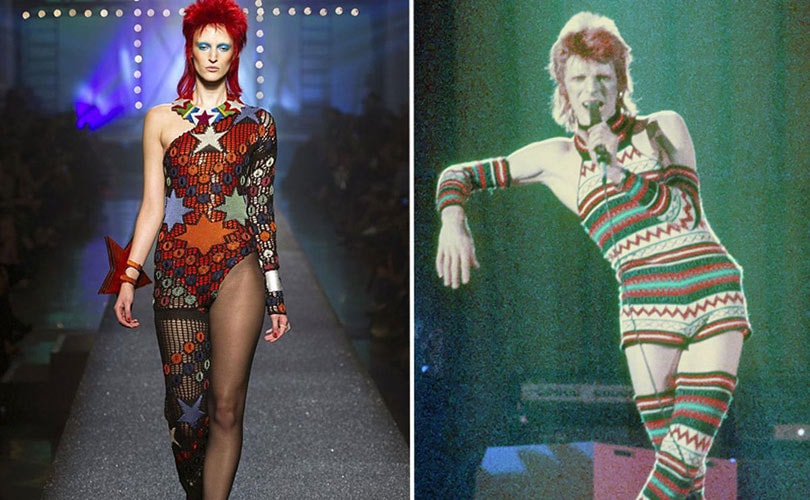 Perhaps with Bowie there is a fear in attempting to improve on the unimprovable, to tamper with greatness?

But I’m convinced Bowie would wish you to tamper with him. He’d offer himself up with a sexy swagger and cheeky grin and say Have at it, darling! The ultimate trendsetter, he was a master of such practices. In an interview with Playboy in 1976, when asked if he considered himself an original thinker, he replied, “Not by any means. More like a tasteful thief. The only art I’ll ever study is stuff that I can steal from. I do think that my plagiarism is effective. Why does an artist create, anyway? The way I see it, if you’re an inventor, you invent something that you hope people can use. I want art to be just as practical. The more I get ripped off, the more flattered I get. But I’ve caused a lot of discontent, because I’ve expressed my admiration for other artists by saying, ‘Yes, I’ll use that,’ or, ‘Yes, I took this from him and this from her.’ Mick Jagger, for example, is scared to walk into the same room as me even thinking any new idea. He knows I’ll snatch it.”

I can only conclude that his peacock radiance blinds young design students who are unused to such magnificence parading around in today’s blandly commercial scene. In David Bowie, there is such a plethora of sartorial curiosities to pluck from and examine at length that they baulk, retreating intimidated. Even as I encourage them to mine the archive he has generously left us––of glamour, tailoring, Mod, Glam Rock, alter egos, Kabuki, androgyny, gender fluidity––my students will look distractedly past my enthusiastic ramblings and alight on Kanye instead. Ah, but perhaps now if I add that Kanye paid tribute to David Bowie this week as “one of my most important inspirations, so fearless, so creative, he gave us magic for a lifetime,” might they finally be swayed?

I consider myself lucky that Bowie featured in the classroom in which I was a student. One of my MA instructors at St Martins, Julie Verhoeven, was a big Bowie fan and his influence often came up during tutorials. This is one of her illustrations of him. 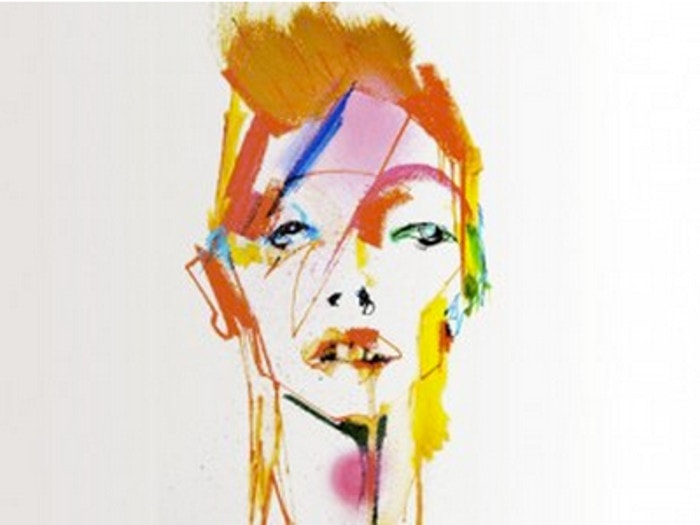 Although neither Verhoeven nor myself were around when David Bowie first fell to Earth, we individually found him as soon as we were old enough to follow the explosions of sequins. Intuitively, instinctively, we were all drawn to him: in the thrall of the symbiotic harmony between his music, his extraterrestrial physical presence and the amazing clobber he wore. We were his goon squad and we were coming to town. Beep Beep.

To me he seems timeless in a way that the Beatles or Rolling Stones aren’t. They are of another generation: Dad Rock. But can it be that the effervescent Bowie, to my students, also falls into that category?

This seems hard to believe as he encapsulates so much of what makes millennials tick: he is narcissistic and glamourous, daring but nonchalant, successful but alternative, gender-bending, hyper-stimulated, and rule-breaking. He not only sings a song entitled “Fashion,” but so many of his lyrics are practically challenges, gauntlets thrown down to inspire budding style pioneers, like these lines from “Queen Bitch”:

She's so swishy in her satin and tat In her frock coat and bipperty-bopperty hat Oh God, I could do better than that. Well, students? What are you waiting for? RIP, David Bowie. Beep Beep. 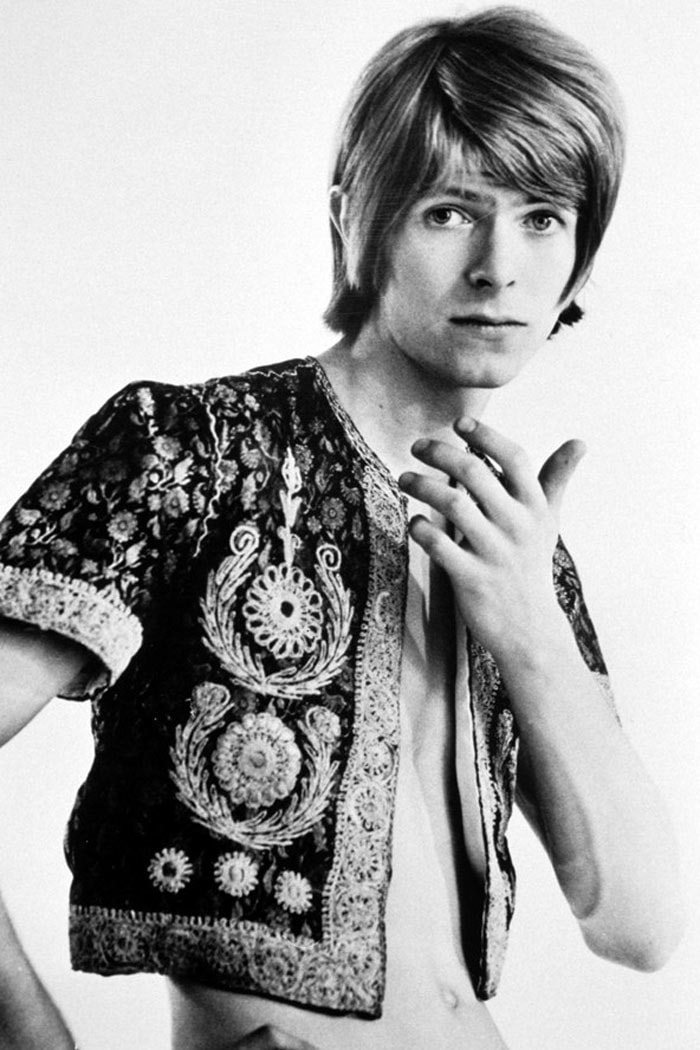