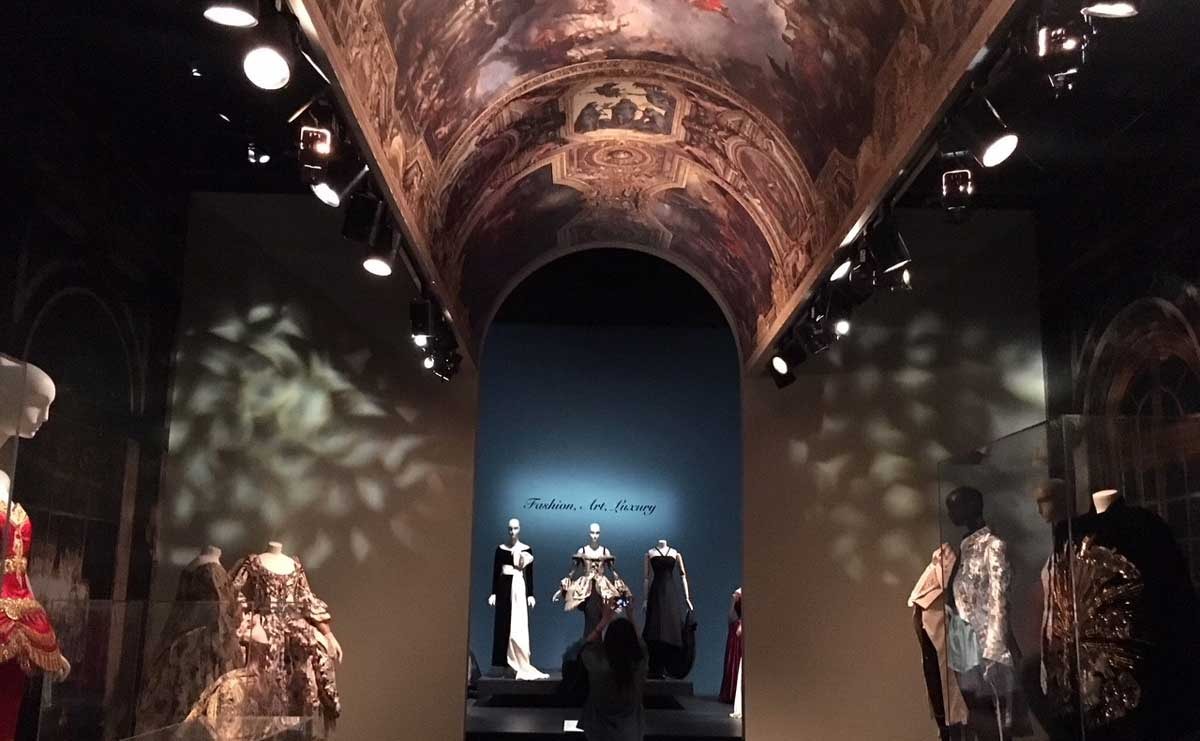 In a provocative move FIT launched its Fall exhibit entitled “Paris, Capital of Fashion” on the first day of New York Fashion Week. But a walk through the gallery reveals that the exhibit title is perhaps less of an assertion, more of question. For over 300 years, with particular emphasis on certain periods, the French capital has epitomized decadent glamor. But is it still so? Valerie Steele, Director of The Museum at FIT, describes how the city has been “mythologized” over time, and an “aura” created around it. This is the dialogue which forms the central thread of “Paris, Capital of Fashion.” 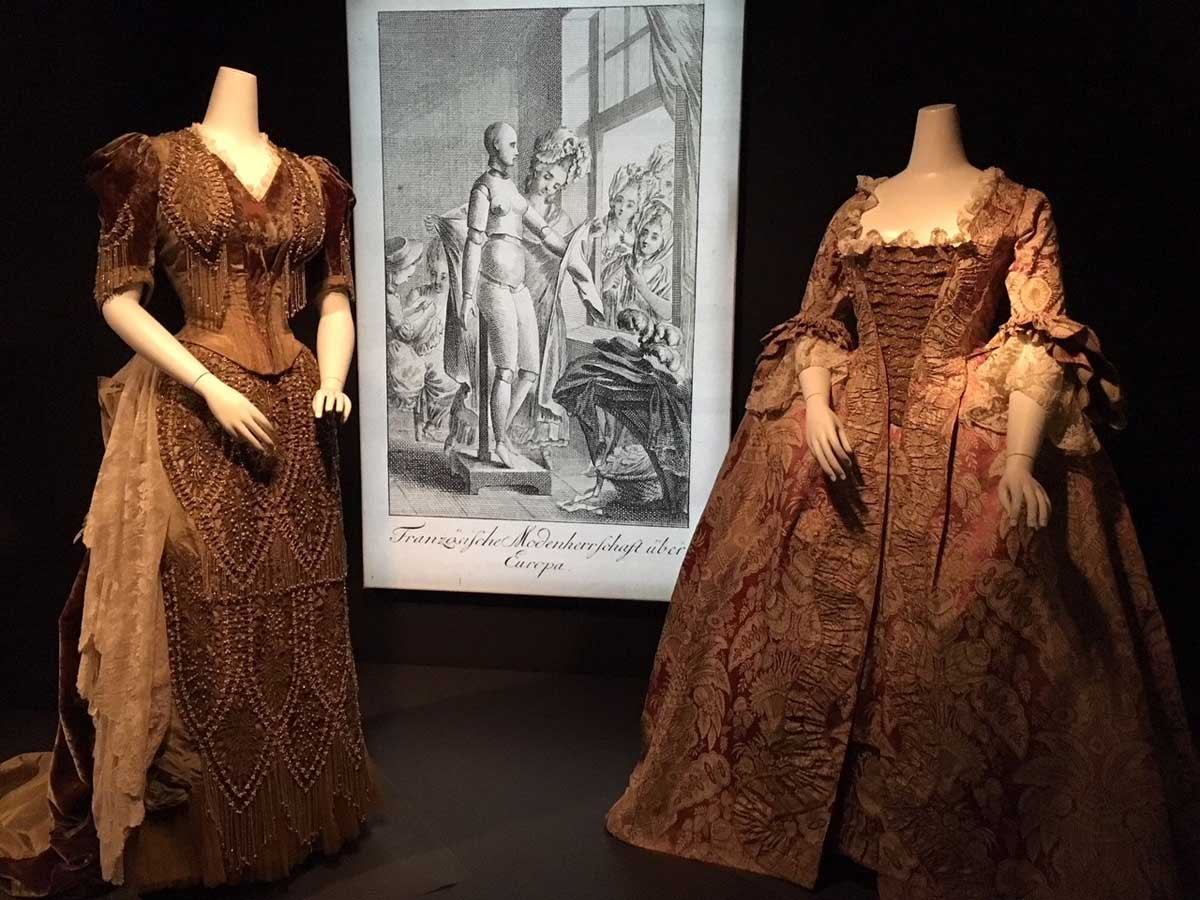 The exhibit traces the prestige of French fashion from the creation of the royal court of Versailles when Louis XIV began his powerful 72-year reign, chronicling aesthetic and cultural evolutions through the *robe a la française *of the mid-1700s with its distinctive funnel bust culminating in wide richly embellished skirts to the beginnings of haute couture 100 years later when Englishman Charles Worth set up his atelier in Paris and began courting a steady flow of wealthy Americans.

With that an interesting truth begins to emerge. Paris fashion is an industry of immigrants, its most lauded figures born elsewhere. Yves Saint Laurent was from Algeria, Azzedine Alaïa from Tunisia, and Gaby Aghion who in the 50s founded Chloe, that label so infused with the spirit of French youthful femininity was Egyptian. Karl Lagerfeld who designed Chanel for 35 years until his death this past February was born in Germany while Alber Elbaz who made Lanvin the luxury label for the new millennium is Israeli. And it’s nearly impossible to list the steady parade of British- born designers drafted in over the years to keep both haute couture and prêt-à-porter operating optimally, of which Claire Waight Keller at Givenchy, Phoebe Philo at Céline, and John Galliano at Dior are three examples. 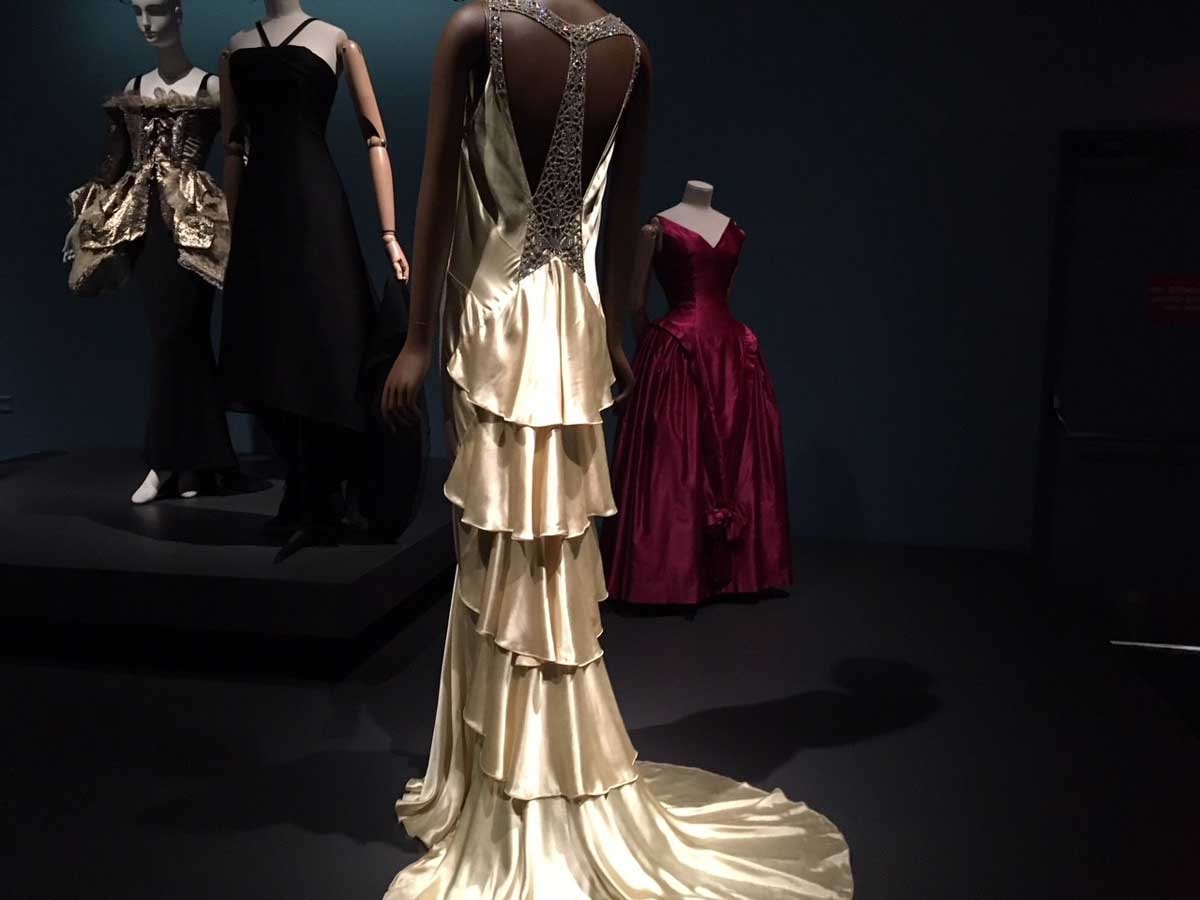 Still, designers are drawn to the City of Light whether it is for the aura or the actuality. Designer Rick Owens, an American in Paris, views the city’s runways as a test of one’s mettle, commenting, “Paris is where you come to be judged.”

During the Nazi occupation of WWII, Paris fashion struggled. Americans stopped frequenting the luxury houses and the American tradition of special licensing agreements took off which allowed copies of Parisian designs to be created for the US market. The exhibit contains a fine example in three similar-looking suits, one from Chanel, the second a licensed copy, the third an illegitimate copy, their differences detailed in an accompanying video. Illegitimate copies made in Manhattan’s bustling garment district had started to satisfy an American customer hungry for the European look but at more comfortable prices. 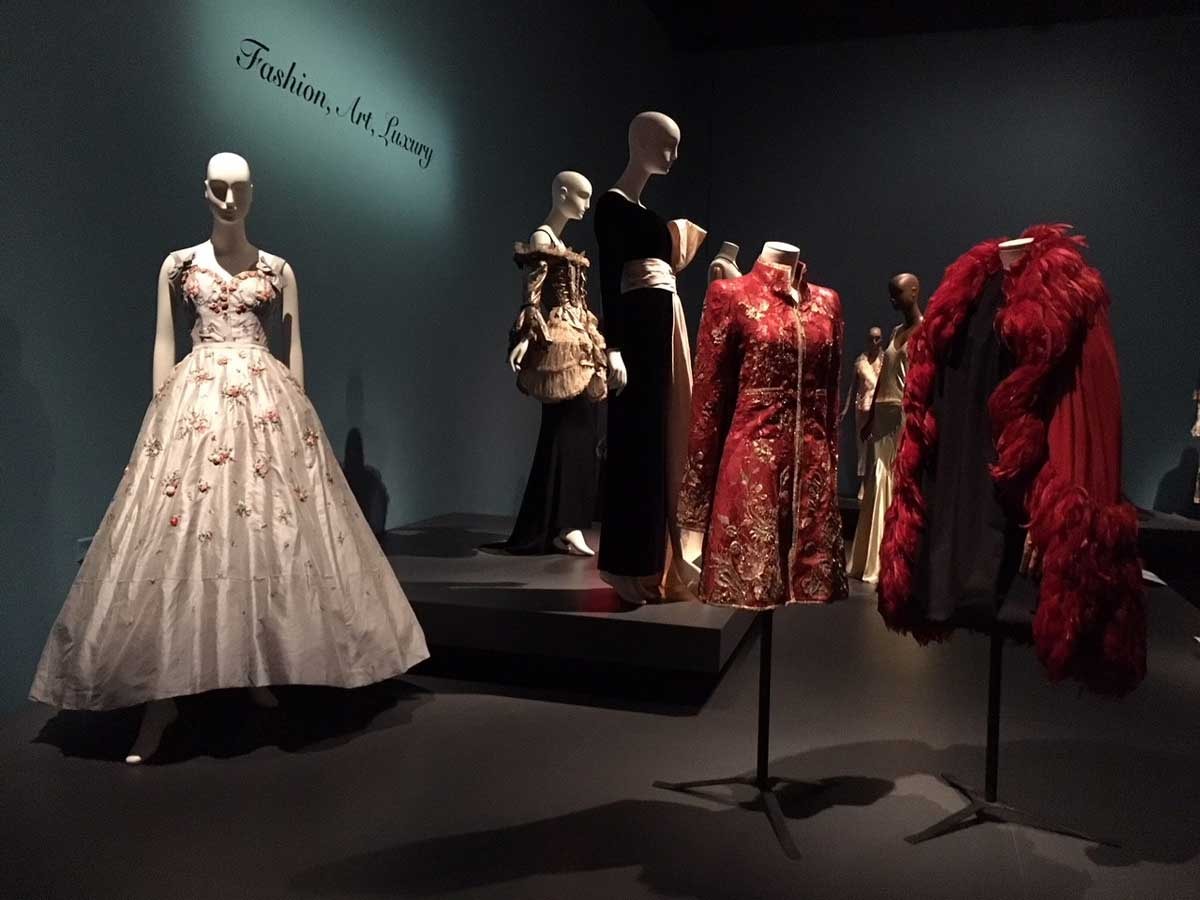 It was perhaps 1971’s legendary Battle of Versailles when US fashion emerged not only as a threat but victorious over the French. Five designers from either side presented eight looks each on the runway in a veritable prêt-à-porter/sportswear face-off: Yves Saint-Laurent, Pierre Cardin, Emmanuel Ungaro, Christian Dior and Hubert du Givenchy against Halston, Oscar de la Renta, Stephen Burrows, Bill Blass and Anne Klein. The energy, easy separates and racial diversity of the American presentation punctuated by a performance by Liza Minnelli suddenly placed the French designers in a decidedly old-fashioned light.

Over 100 items are on display including cases containing hats, shoes, and fans around an impressive central set design imitating the splendor of Versailles with its baroque painted ceilings and glittering chandeliers.