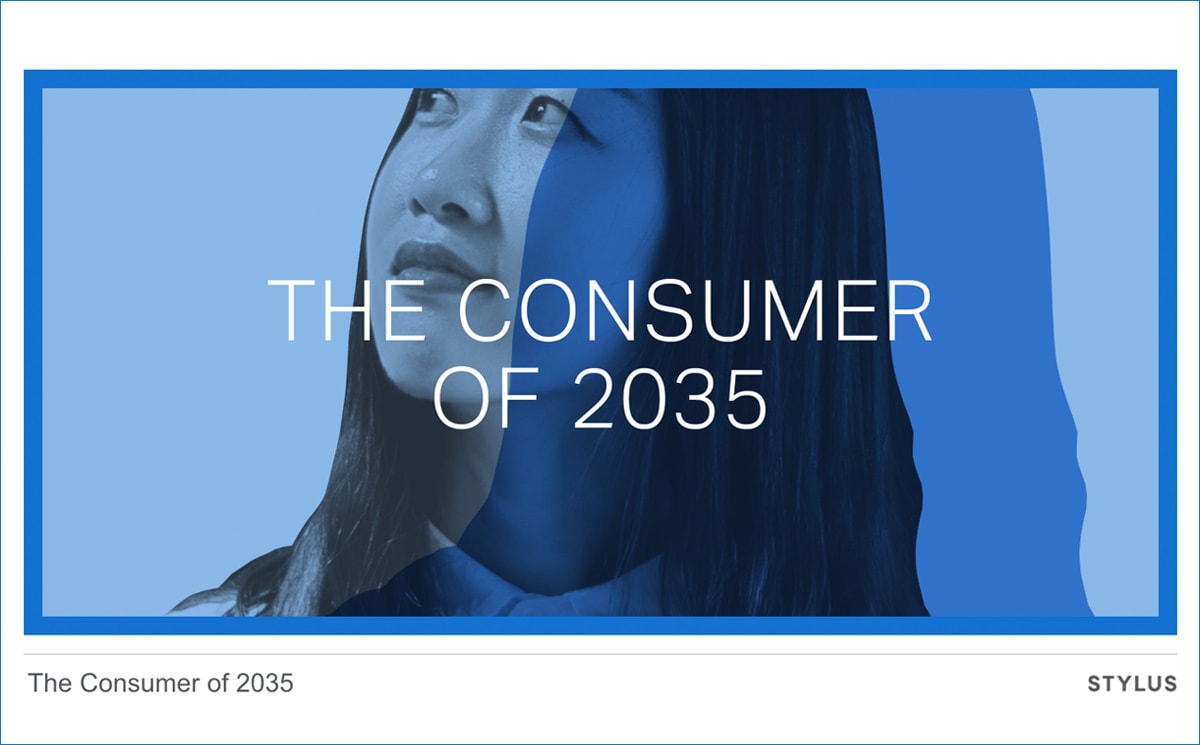 As the next decade sits waiting to be unwrapped, let’s fast forward to the one after that to see what’s in store. According to Decoded Future New York by Stylus it’s a world in which citizens will refuse air travel to be eco-friendly, enjoy fluid relationships with multiple partners, and whose geographical center will be Africa, where birth rates are not falling and the population is young.

In 2035 Gen X (born 1965 -1980) will be entering midlife but unlike past generations, there is no taboo around menopause and they don’t intend to experience it in silence. MegsMenopause.com founded by music industry PR Meg Mathews views it as the forgotten area for female empowerment. Gen Y (1981-1996) also known as millennials will finally experience wealth transferred from their parents leaving them looking for purpose-driven ways to spend. Gen Z, the cohort in their late 20s and 30s, will be more influential than ever, while Boomers will be working into their 70s. The rise of the Centenarian represents a new adulthood of 1.5 million globally, triple today’s number. To meet their needs Ikea in partnership with Swedish firm Skansa is creating flatpack, affordable, environmentally friendly wooden homes for seniors with a carbon footprint less than half that of a standard building project. Gen Alpha (2010-2024) will be aged 11 and a new generation waiting in the wings will already need christening. 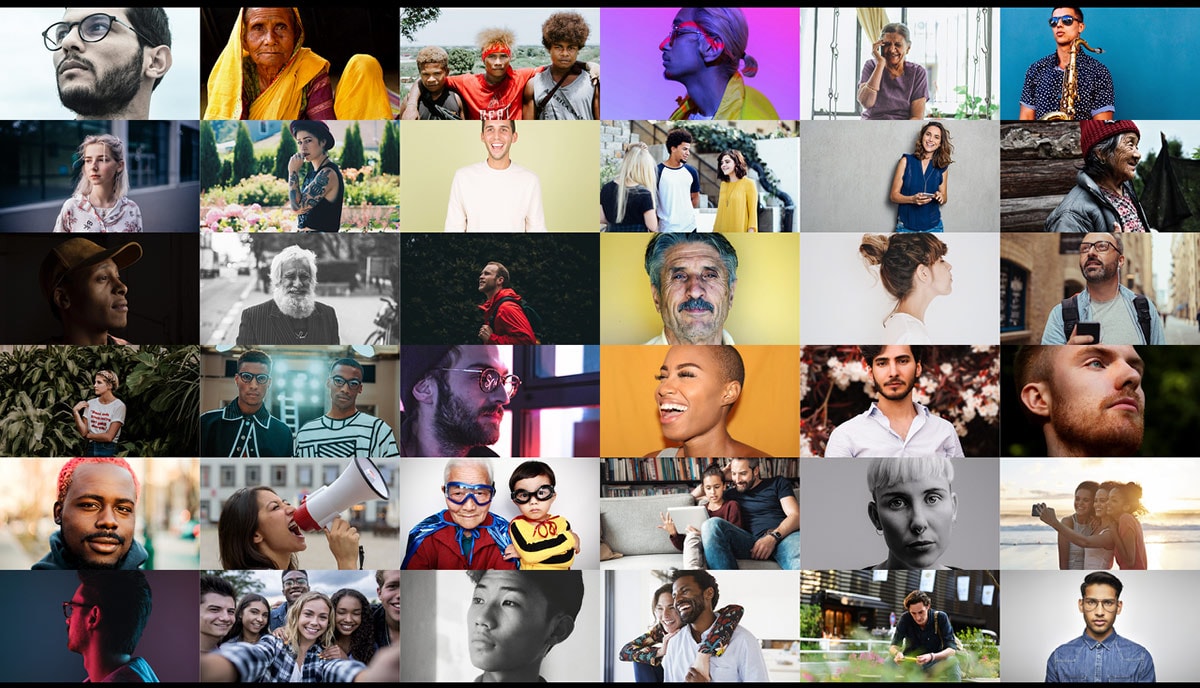 According to the Brookings Institute, China’s 400 million millennials will outearn American millennials by 2035. The majority of Americans under 40 will be black, Hispanic, Asian or multiracial. Unspun Jeans represents the beginning of a democratizing of product which will lead to a neo-bespoke marketplace as 3D body scanners will ensure perfectly fitting apparel thus rendering our current system of sizing and labels obsolete.

In 2035 Gen Alpha will be a spending superpower, familiar with a world in which every surface is interactive. Today’s much discussed sense of isolation among young people could be alleviated by robot companions such as Lovot which exist solely to be loved, held, hugged. Meanwhile the older consumer becomes bionic as powerful exoskeletons like Roam Elevate permit a prolonged active and outdoorsy lifestyle. Spatial computing advanced experiences such as Coral Reef by Magic Leap will fill our living spaces and we’ll be free of screens and headsets as daily life will be activated by voice, gaze and gesture. Style seekers feeling the pressure of buying and returning statement designer pieces to maintain high standard Outfit Of The Day Insta posts can opt for inexpensive one-of-a-kind digital looks and bask in the likes, while face swapping technology will bring a realistic fitting room experience to the home shopper. 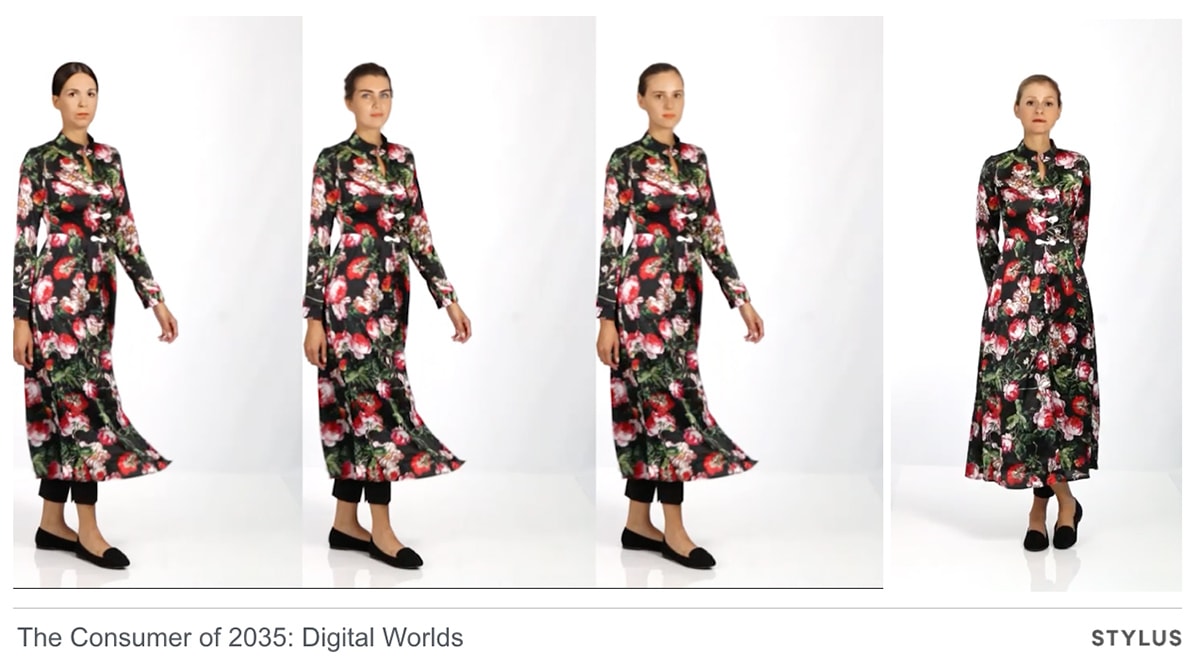 Considered the epicenter of opportunity for brands, innovations such as fertility-tracking wearables, garments which align with our circadian rhythms or eating habits, or with medicinal effects built in, will be common. We will dress in air purifying textiles inside smog-eating buildings. In this too, Ikea’s leading the way with its Gunrid curtain, a textile that breaks down common indoor air pollutants such as odors and formaldehyde.

Being wrapped in nature like the Nendo office in Tokyo is the beginning of what will represent the ultimate in lux as extreme naturescapes, whether real or digital, become commonplace. Designers will produce mixed reality collections, offering digital and tangible twin sets. However, conversely, a craving for synthetic fabrics will emerge and vintage plastic garments will be trending. China will have discarded its interest in Western luxury names to support a healthy homegrown luxury industry, while the LVMH Fenty partnership is a forerunner for the kinds of collaborations that will flourish.

One company’s output is another company’s input and resilience and self-sufficiency drive business.. According to the MacArthur Foundation, nearly 200 businesses have signed the New Plastics Global Commitment pledge to make 100 percent of their plastic reusable, recyclable or compostable by 2025. Fast forward to a decade later, zero impact or bio-contributing packaging designed to be buried such as that developed by beauty brand Haeckels will be the norm. The future scenario also includes robots and drones delivering product refills, and smart packaging which sends alerts as product runs low. Ownership is ever more streamlined and a lightweight existence the epitome of cool. Your body becomes your wallet and with retina scanning you literally pay with the blink of an eye.