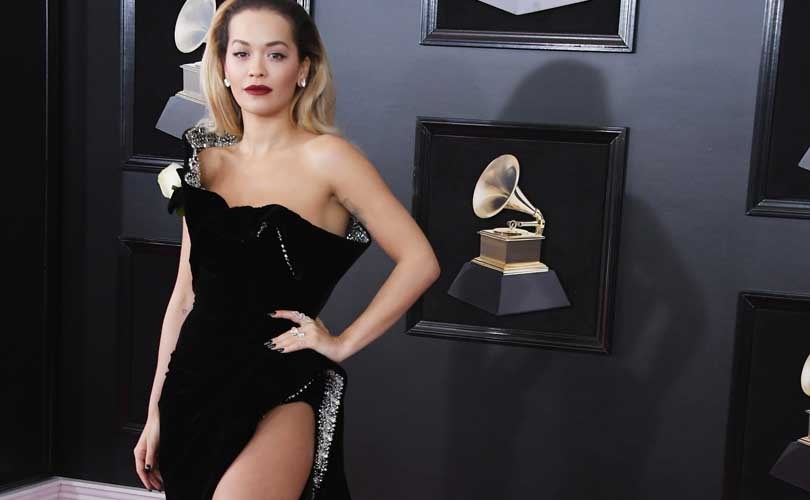 After the "blackout" on the Golden Globes red carpet to draw attention to sexual harassment in showbiz, the music industry's hottest stars wore white roses to the Grammys on Sunday in support of gender equality.

From Lady Gaga and Kelly Clarkson to Sting and Khalid, the A-listers sported or carried the flowers. "A white rose symbolizes respect, pays homage to new beginnings and expresses hope for the future," tweeted the Time's Up movement, launched by hundreds of prominent women in Tinseltown to shine a light on sexual misconduct.

"We like the sound of that. #TIMESUP at the #GRAMMYS." Gaga wore white rosebuds and a Time's Up pin on the shoulder of her dramatic black Armani ensemble with a lace bodice and tights, visible through a massive slit in her sweeping skirt with a huge train. Her blonde hair was pulled back in a fishtail braid decorated with corset-like black laces.

And during her performance of ballads "Joanne" and "Million Reasons," she whispered, "Time's up." Clarkson -- who was carrying her white rose -- turned fangirl on the red carpet, swooning over multiple nominee Khalid and saying how much she loved his music.

But the pop diva -- who wore a custom black Christian Siriano gown with gold accents -- turned serious when talking about the symbolism of the flower, saying that to her, it reflects "hope and peace and sympathy and resistance." "It's amazing to be a mother and to have a mother run my label," she told E! television.

For Lauper, the white rose movement was about equal pay. "Women make up 51 percent of the workforce, and it's about time we're paid equal," she said. Songwriter Diane Warren showed up with white gloves, one word on each hand: "Girl" and "Power."

'Equality for absolutely everyone'

The music men were not left out. Multiple nominee Khalid, Sam Smith, Sting, host James Corden and Ne-Yo were among the many men who sported roses on their lapels. And the men turned up in bright colors: mustard yellow, pink, maroon and deep red stood out from the basic black. p>

Elton John took it to the next level in a glittering jacket in red, gold and blue -- and a sparkling multicolored full-hand ring that spelled out ELTON. Smith, the British soul singer who rocketed to stardom in 2014 with his searing ballad "Stay With Me," wore a striking double-breasted grass green suit with a burgundy shirt underneath. "I hope we keep striving forward for equality for absolutely everyone," said Smith, a performer at Sunday's gala.