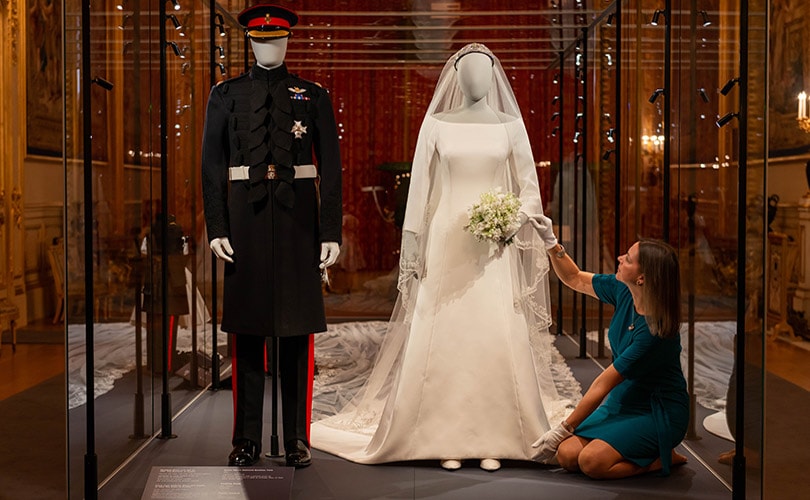 Inside the Duke and Duchess of Sussex's wedding exhibition

Displaying Royal wedding gowns to the public is a “long-standing tradition that stretches back centuries,” states Caroline de Guitaut, senior curator at the Royal Collection Trust, and Windsor Castle will be showcasing the Duchess of Sussex’s timeless Givenchy Couture gown for the first time in the castle's Grand Reception Room, where the Queen hosted an afternoon reception for the 600 wedding guests following the St George's Chapel wedding ceremony on May 19.

The ‘A Royal Wedding: The Duke and Duchess of Sussex’ exhibition, organised by the Royal Collection Trust has taking almost nine months of planning, and includes the Duchess’ bridal gown, designed by Clare Waight Keller for Givenchy, alongside her five metre-long veil and the diamond and platinum tiara loaned to the bride by the Queen, alongside an identical version of the Duke’s Household Cavalry frockcoat uniform made by Savile Row tailors, Dege and Skinner.

The special exhibition, which will form part of the Windsor Castle tour, will be open until January 6, 2019, before moving to the Palace of Holyroodhouse in Edinburgh next summer, and also includes the pageboy and bridesmaid outfits of Prince George and Princess Charlotte, as well as sketches of the design process of both the gown and veil.

Before visitors make their way into the extravagant Grand Reception Room, with its high ceilings and stunning chandeliers, where Meghan’s 5 metre-long veil adorned over her wedding gown takes centre stage, they get to see inside the Green Drawing Room where the Duke and Duchess of Sussex’s took their official wedding photographs, and discover more about the design and construction of Meghan’s bridal look, from the initial sketches to the final garment. 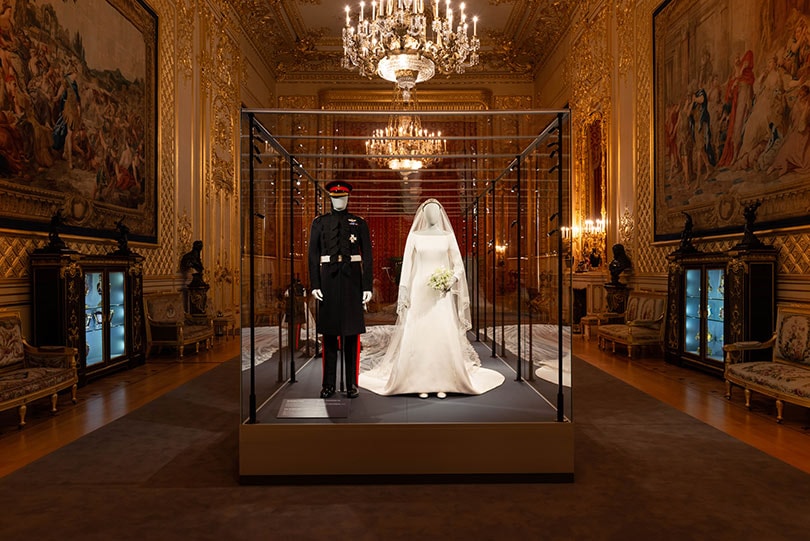 The couture wedding gown and veil took 50 people from the House of Givenchy and the iconic Parisian Lesage Studios 3,900 hours to make. From the 6 paper toile stages, where Waight Keller perfected the silhouette to the creation of the bespoke double-bonded silk cady fabric for the gown and the work to create the delicate and whimsical embroidered detailing of the veil.

On a press walk-through of the exhibition, ahead of the opening, de Guitaut stated: “To be able to display the wedding dress here at Windsor Castle and the other pieces, in the surroundings they were actually worn originally is very special.

“It was important for me, when putting together the display, to show the dress and veil working together, alongside Prince Harry, and to allow visitors to see the details of their wedding up close, which was also important to the Duke and Duchess, who have been very much involved with the process.” 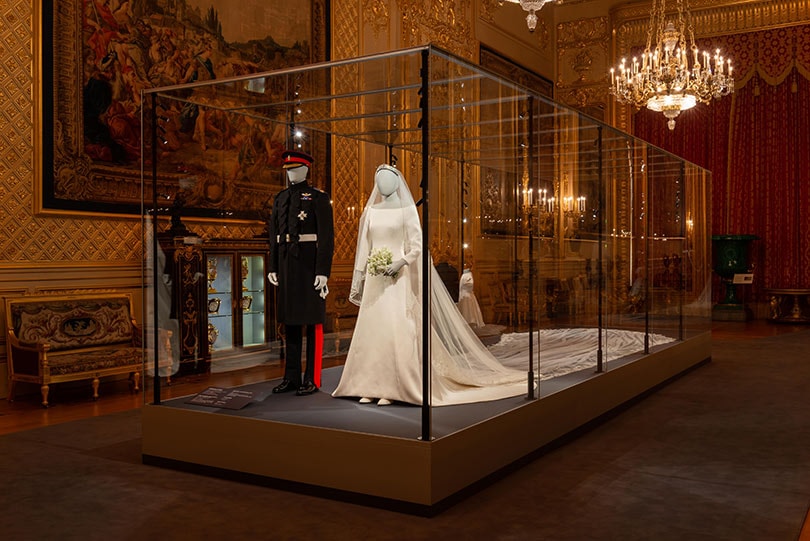 A Royal Wedding: The Duke and Duchess of Sussex exhibition of outfits opens at Windsor Castle

The Givenchy gown is obviously the big draw, especially when teamed with the audio commentary for the exhibition, which features both the Duke and Duchess discussing intimate details of their wedding planning from the music to the flowers, their outfits, as well as their meeting with the Queen to choose a headpiece, which Meghan describes in the audio recording as a “completely surreal day”. The diamond and platinum bandeau tiara, on loan from the Queen, is on public display for the first time as part of the exhibition.

Of her “dream” wedding dress, the duchess said in the exhibition commentary: "I had a very clear vision of what I wanted for the day, and what I wanted the dress to look like.” 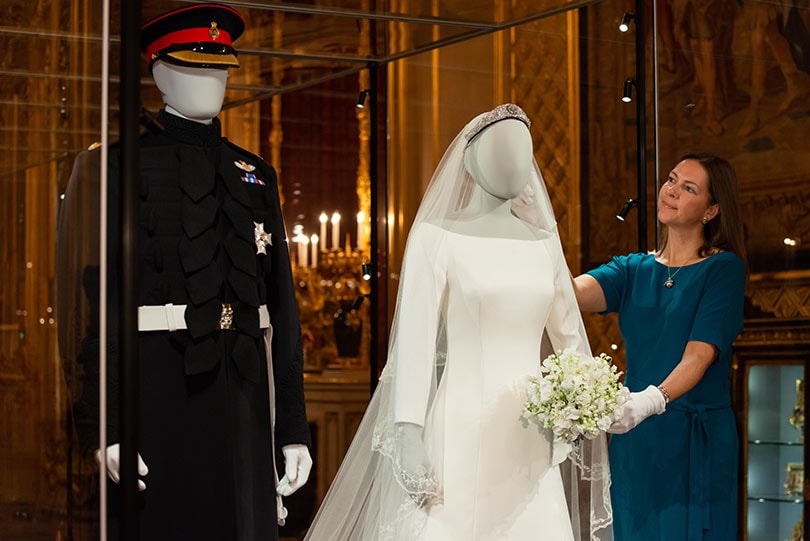 Adding that she "knew at the onset" that she wanted her gown to have a “timeless, classic feeling” with a bateau neckline and cropped sleeves, as well as wedding dress that respected the environment of the chapel by being “modest”.

On choosing Waight Keller as her designer, the Duchess said: “I’ve followed her career and I respected her attention to detailing and tailoring, and also for me I wanted a female designer, that was very important.

“I also wanted a British designer to embrace my new home and someone who was working for a brand, which has global international impact that didn’t feel completely isolated to just one territory. I’m an American and I wanted it to reflect the world in a way and in choosing Clare it seemed to tick all the boxes.”

The Duchess continued: “What was amazing in working with Clare is that sometimes you'll find designers try to push you in a different direction. But she just completely respected what I wanted to see for the day, and she wanted to bring that to life for me.” 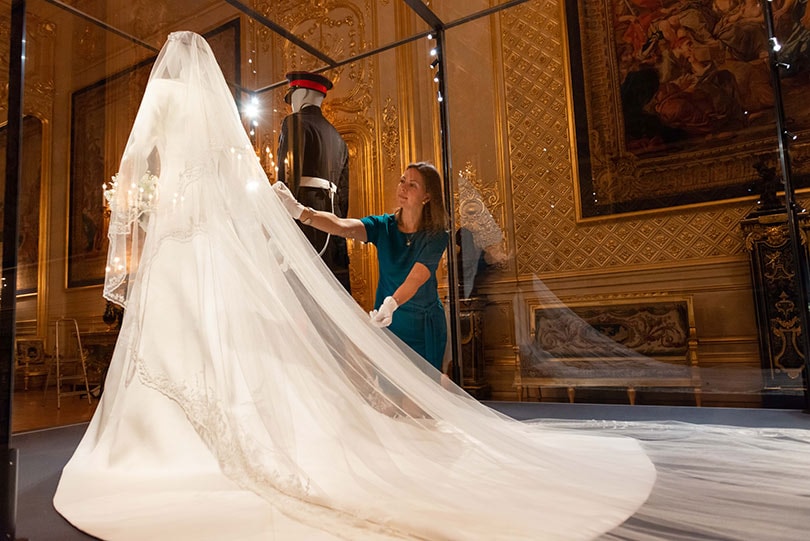 The beauty of this exhibition is in the details, up close you can see the delicacy of the silk tulle veil embroidered with the flora of the 53 countries of the Commonwealth, a tribute to the Duke of Sussex's role as Commonwealth Youth Ambassador. The whimsical wildflower meadow embroidery isn’t flat but rather three-dimensional, featuring lace appliqués, organza cut work and satin stitch, which de Guitaut explains is “highly complex and impactful” and was used to highlight the “natural, whimsical and wonderful texture” of the floral design.

On where the idea to use flowers came from, De Guitaut added: “Clare began looking at the idea of flags - then I think she realised this probably wouldn't work and then started thinking about flowers, but instead of using national emblems, they looked to wildflowers of the different 53 Commonwealth countries. After about a month of researching, the initial sketches show how the flowers would be sprinkled across the edge of the veil.”

You can also stand inches away from Meghan’s stunning gown, where you can really appreciate the “luminosity" and “pristine white finish” of the double-bonded silk cady fabric, which was created exclusively for the royal wedding gown, as well as the elegance of the simple design, which was achieved using just six placed seams, as well as the shape of the neckline, and the floating hemline, which De Guitaut described as a “signature” of the House of Givenchy, to create “a really elegant proportion that makes the dress almost appear to be floating”.

De Guitaut, stated:“Both the Duchess and Clare had a clear vision on what they wanted to achieve - something that was timeless, classic, but also something with a modern feel, and that’s really reflected in Clare’s work at Givenchy - so the perfect combination in many ways. Creating something that is so simple means that attention to detail is so important.”

“While the dress is very simple, very structured and tailored, and architectural almost, Clare wanted the veil to have a kind of drama, and that’s why the proportion was worked out after many trials to go with a 5 metre length - which gave the look a wonderful drama as the Duchess walked up the steps to St George’s Chapel.” 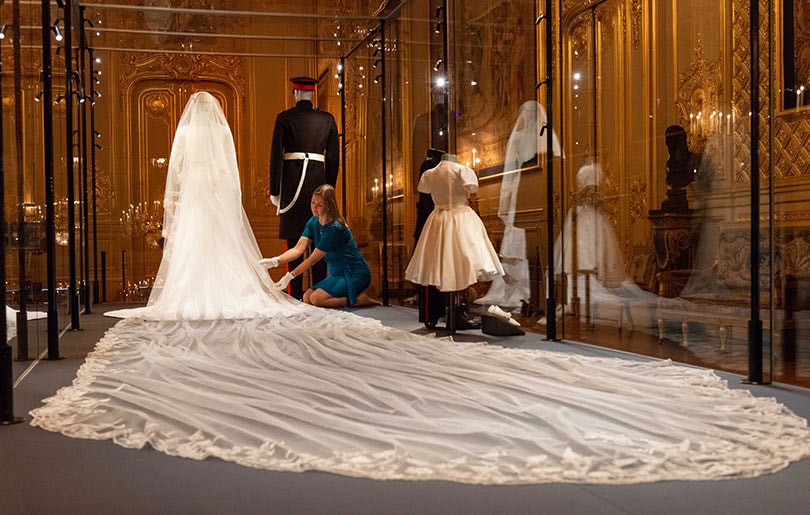 Alongside the Duchess’ wedding gown is the Duke of Sussex’s frockcoat uniform of the Blues and Royals regiment, specially commissioned for the occasion and made by tailors at Dege and Skinner, which features a single-breasted blue doeskin jacket with intricate figured braiding of the Regimental pattern on the stand-up collar and sleeves, and was chosen by the Duke as it is one of his favourites.

In the recording for visitors, the Duke said: “I chose the frock coat as a uniform, with permission from my Grandmother, because I think it’s one of the smartest Household Cavalry uniforms. It’s one of my favourites, and I was very fortunate to be able to wear that on the day.” 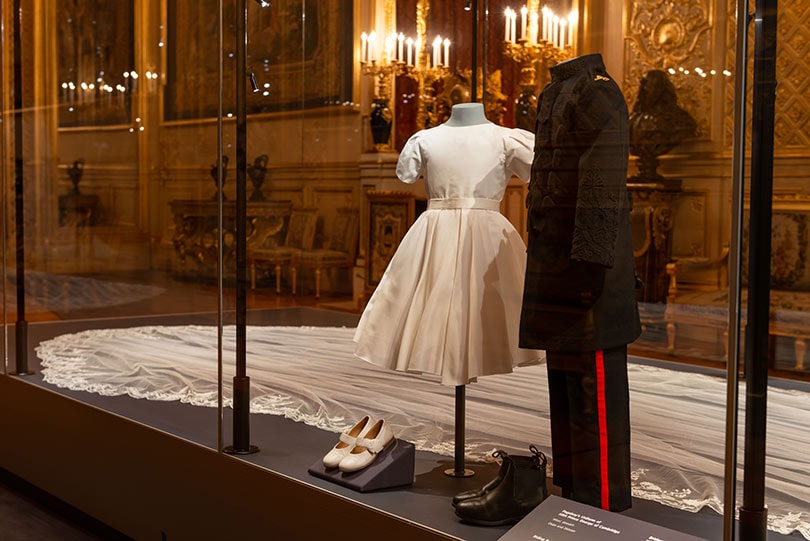 “The biggest challenge for them was replicating the embroidery from the full-size frockcoat that I was wearing into mini versions,” explains the Duke. “It was the first time it had ever been done, and the pageboys got to keep their frockcoats and they have their initials on the shoulders.”

The final outfit is Princess Charlotte’s bridesmaid dress, also designed by Waight Keller, the dress features short puff sleeves and a double silk ribbon at the waist, which was tied in a bow at the back on the big day. The Princess’ white leather shoes by Aquazurra, embroidered with her initials and the wedding date are alongside.

When asked if the Duke and Duchess were happy and excited about the exhibition, de Guitaut said: "They haven't seen the exhibition yet because they're on tour. We are trying to find a convenient time - they're kind of busy!”

‘A Royal Wedding: The Duke and Duchess of Sussex’ is part of a visit to Windsor Castle until January 6, 2019 and will then be shown at the Palace of Holyroodhouse from June 14 to October 6 October, 2019.