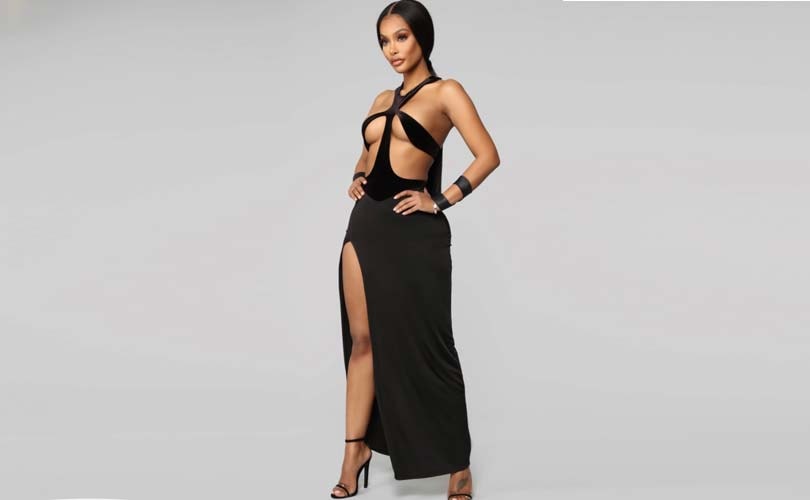 Kim Kardashian is either at war with or involved in a clever marketing stunt with fast fashion brand Fashion Nova.

It all started last week, when the reality TV star and fashion influencer shared an image of herself from a past fitting in a never-before-seen gold dress designed by husband Kanye West. In her caption on both Instagram and Twitter, Kardashian wrote, “Fast fashion brands, can you please wait until I wear this in real life before you knock it off?”

Brands like Fashion Nova and Missguided have been known to sell similar styles to looks worn by Kardashian and her sisters. Youngest sister Kylie Jenner is actually a brand ambassador to Fashion Nova; the brand’s e-commerce site features a page where people can shop looks worn by the beauty entrepreneur.

After Kim Kardashian’s first post on February 8, both Missguided and Fashion Nova responded within hours. Missguided shared an image of a model in a dress directly inspired by the one Kardashian wears in her original post, captioned, “The devil works hard but Missguided works harder. @KimKardashian you’ve only got a few days before this drops online.”

While the brand has since removed its post and never released such a product, Fashion Nova followed through. It shared an image on its own Instagram of a two-piece bodysuit and skirt ensemble inspired by Kardashian’s dress, with instructions on how to find the product on its site. The style sold out within hours.

Fast fashion brands are called as such for their ability to mass produce clothing in a speedy manner, however many people pointed out that a turnaround time of less than 12 hours between seeing the original inspiration, creating a pattern, sourcing materials, producing the garment, photographing a model wearing it and creating an e-commerce page for it seems unrealistic.

A few followers on Fashion Nova’s Instagram page wrote in the comments that they believed the sell-out product was a result of a planned marketing tactic in partnership with Kardashian. Fashion watchdog Diet Prada and law blog The Fashion Law shared similar beliefs.

After a second incident of Fashion Nova quickly turning around an imitation of Kardashian’s outfit, the celebrity wanted to shut down any rumors of having been involved with the brand.

Fashion Nova sold an imitation of a vintage Thierry Mugler dress worn by Kardashian a few days after the first knock-off, and Kardashian took to Twitter to share a series of posts slashing the brand for imitating other designer’s work.

She wrote, “It’s devastating to see these fashion companies rip off designs that have taken the blood, sweat and tears of true designers who have put their all into their own original ideas. I’ve watched these companies profit off my husband’s work for years and now that it’s also affecting designers who have been so generous to give me access to their beautiful works, I can no longer sit silent.”

“Only two days ago, I was privileged enough to wear a one-of-a-kind vintage Mugler dress and in less than 24 hours it was knocked off and thrown up on a site - but it's not for sale. You have to sign up for a waitlist because the dress hasn’t even been made to sell yet. My relationships with designers are very important to me. It's taken me over a decade to build them and I have a huge amount of respect for the amount of work that they put into bringing their ideas to life.”