Ahead of London Fashion Week if you had to pick out one show that would bring the party it would have been Ashish, known for his high-tempo catwalk collections, however, when the invite arrived, a packet of wildflower seeds, it suggested that the British designer was about to take us all in a different direction.

Set in the large sports hall of the Seymour Leisure Centre, Ashish greeted his guests with a meditative beats from musicians, Candida Valentino and Michael Ormiston, who played with gongs, wind chimes, and a singing bowl, adding a calm to the storm of fashion week, as the sun set through the skylights. 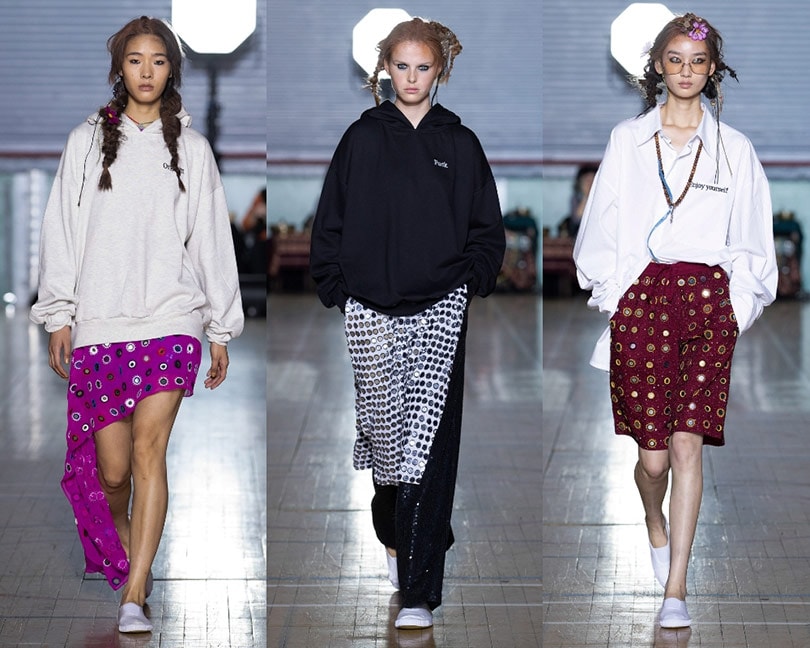 For spring/summer 2020, Ashish was inspired by the Netflix documentary series, Wild, Wild Country, which tells the story of the Rajneeshpuram ashram cult in Oregon, the designer told FashionUnited backstage following his show: “I became kind of obsessed with Ma Anand Sheela’s character, I was thinking she’s kind of amazing, she is such an anti-hero and you don’t want to mess with her - she is such a strong character.

“Then I was kind of inspired by the situation, about being in an ashram, away from everything, it is like a magical space where it is like free love and everybody’s like really chill and just away from all the horribleness that is happening. 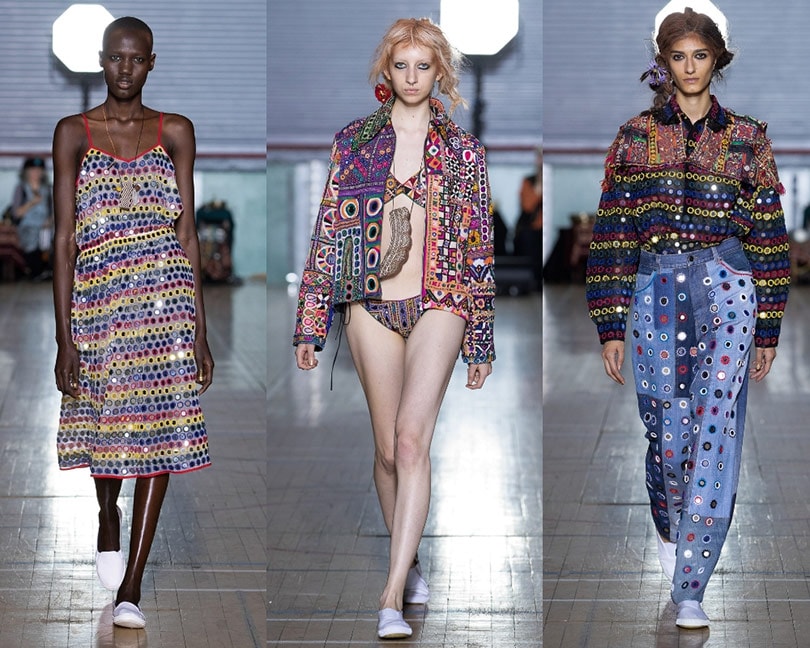 “It is kind of like escapism, just beauty, magic and escapism.”

Ashish has a spiritual awakening for spring/summer 2020

This was a spiritual awakening of sorts, there were still sparkles, sequins, bright colours and clashing patterns, everything we expect from Ashish, yet it seemed a little more subdued, if not reflective and mesmerising. 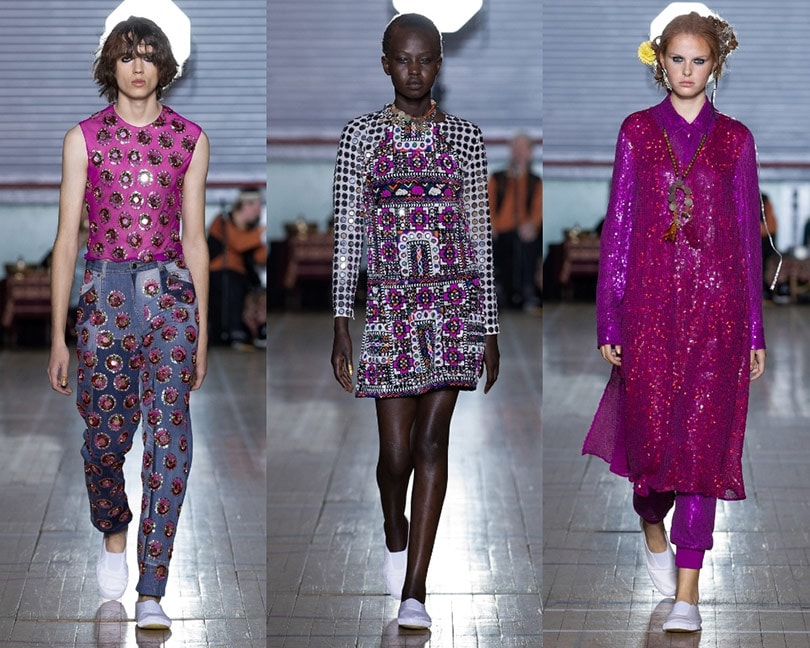 Gone were the overtly obvious tongue-in-cheek slogans, well except for one black sweatshirt that featured 19 sexual expletives on the back, all of which began with ‘fuck’, this collection was more reflection, quite literally, as traditional shisha mirror embroidery covered full tracksuits, denim, shirting, slip dresses and full-skirted dresses.

As well as spring/summer ready-to-wear, the catwalk showcase also featured resort-style pieces from swim shorts and polos for men, and bikinis for women, which were mixed in alongside sportswear, which Ashish stated added “contrast” to the collection. 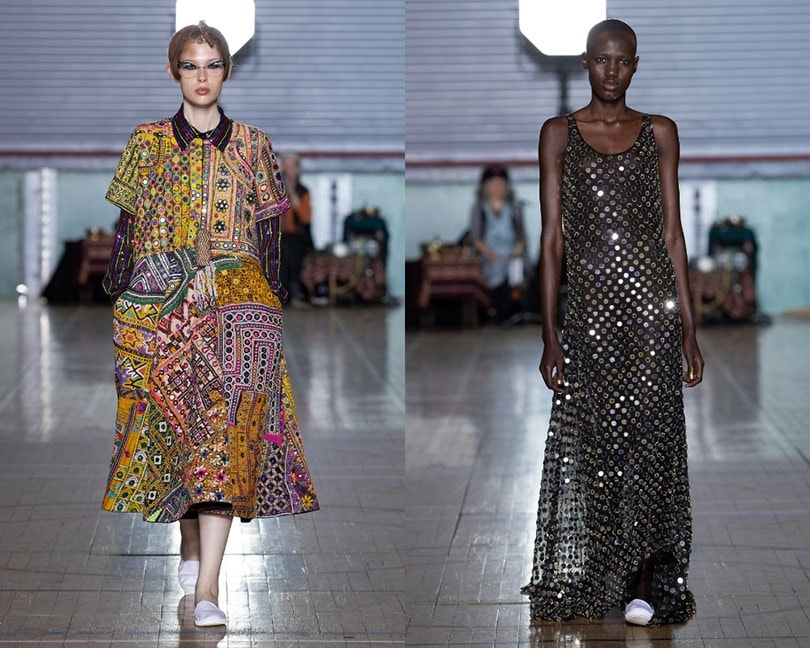 As with most London Fashion Week designers, sustainability was on Ashish’s mind, following on from previous collections dedication to slow fashion, the designer added: “A lot of the fabric was actually vintage that I literally found sack loads of, I’ve then joined them all together to make my own fabric.

“Also, all the denim is sustainable, as it is all old jeans that have been cut up and joined back together.” 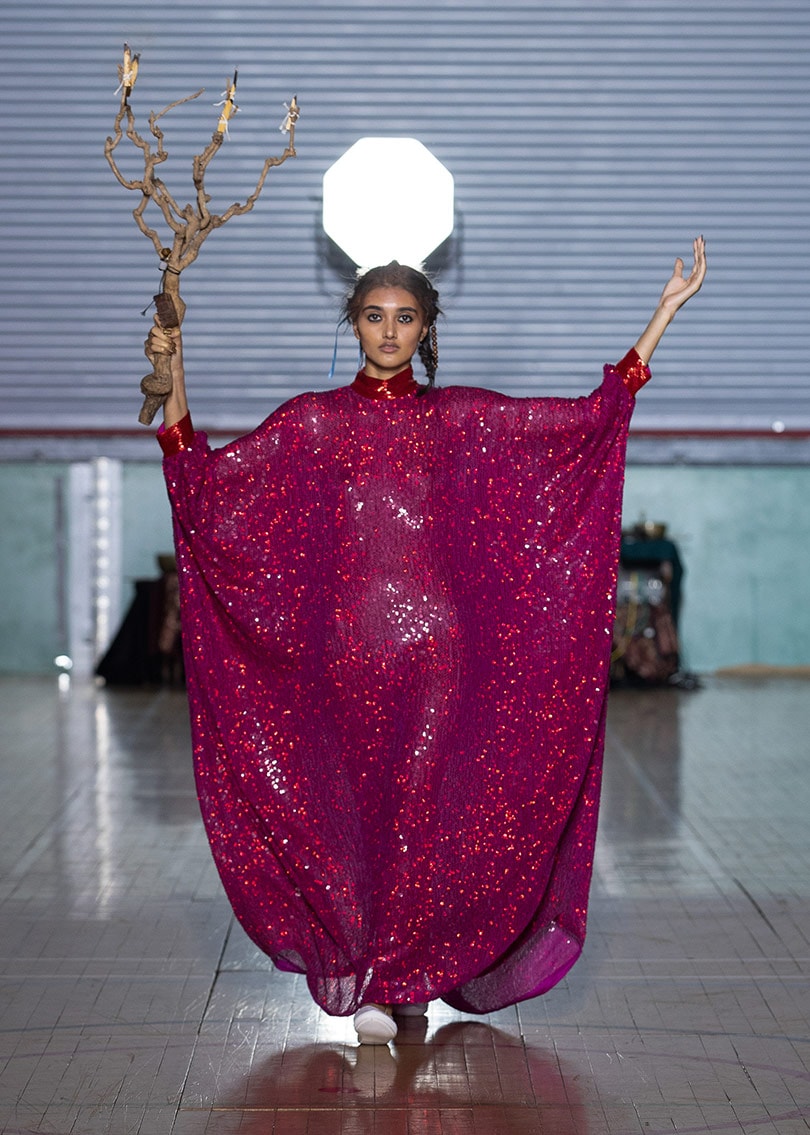 The looks were also all styled with handmade jewellery, featuring discarded wood blocks that Ashish said he had “found” about the place, which really added to the hippy-vibe of the colourful collection.

The show notes concluded with a quote from controversial Bhagwan Shree Rajneesh, also known as Osho from the documentary Wild Wild Country, saying: “A little foolishness, enough to enjoy life, and a little wisdom to avoid errors, that will do.”

If this was Ashish starting his own cult, a cult filled with a kaleidoscope of sequins, sparkles and mirrors, where do we sign up. 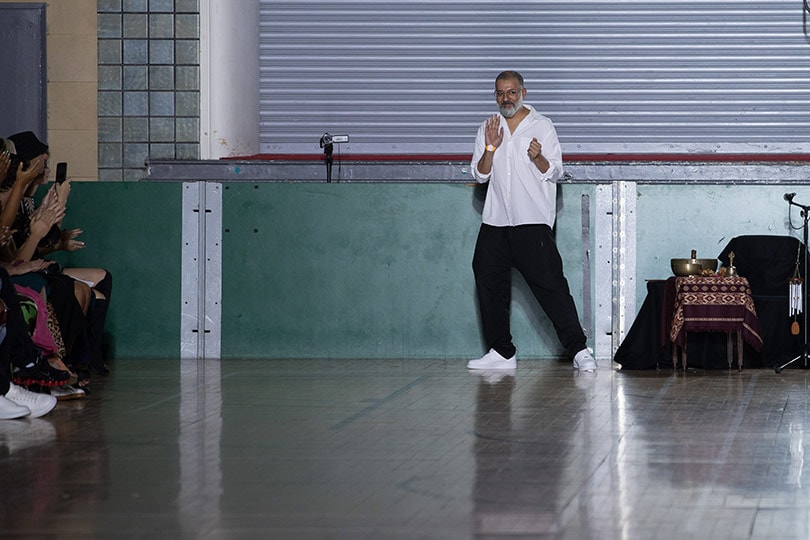