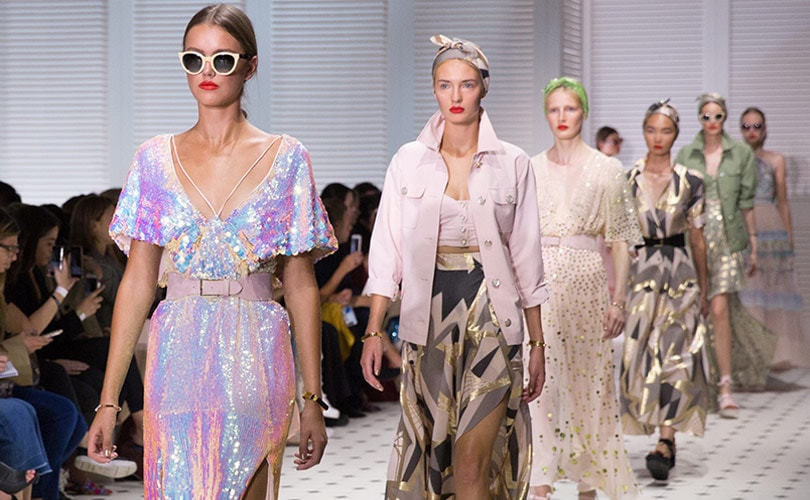 As London Fashion Week opened Friday morning, an attempted terrorist attack took place on the Underground by Parsons Green station, the fifth terror incident to take place in Britain in under six months. As the UK terror threat level is raised to its highest rating by prime minister Theresa May and armed forces walk the streets, London Fashion Week almost seems to exist in a separate bubble as fashion houses from Burberry to Topshop present their upcoming collection to the fashion world.

However, a closer look at the collections shown throughout the weekend reveals the red thread connecting these real-world events to the designs being unveiled. In these uncertain times designers turn to the past, to subjects already known, or familiar themes to create garments which offer their wearers comfort, sanctuary or a sense of belonging in an increasingly fragmented world.

Molly Goddard has managed to carve a name for herself within the British fashion scene in three short years thanks to her fairytale-voluminous dresses. But for Spring/Summer 2018 the young designer presented a collection which reflected an age of coming and expanded on from her signature tulle-princess gowns. 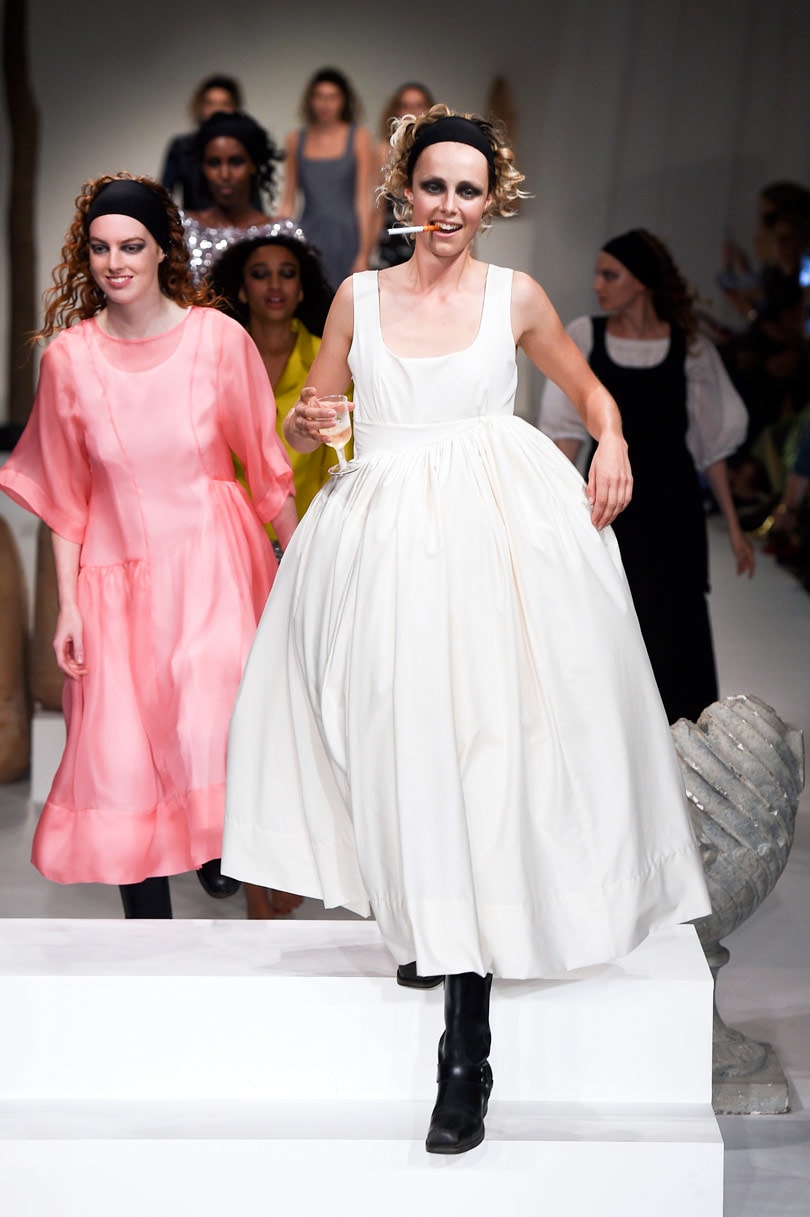 Swing cotton dresses and sequin minidresses showed a more sensual version of her sweet-feminine dresses, as the designer paired tailored jackets with A-line skirts. The more structured silhouette builds on Goddard’s previous collection, as the designer had a more grown-up muse. Sexy, yet playful and carefree, the collection offers women a more mature version of Goddard’s fairytale designs.

Jonathan Anderson looked to offer women an cure to the growing “hysteria” in the world by creating a collection that went back to the basics. Rather than experimenting with new silhouettes and forms, the British designer chose to use more common materials, such as sweatshirt jersey and cotton to create a collection of knit dresses, kaftans, cropped Bardot tops and loose v-neck tops. 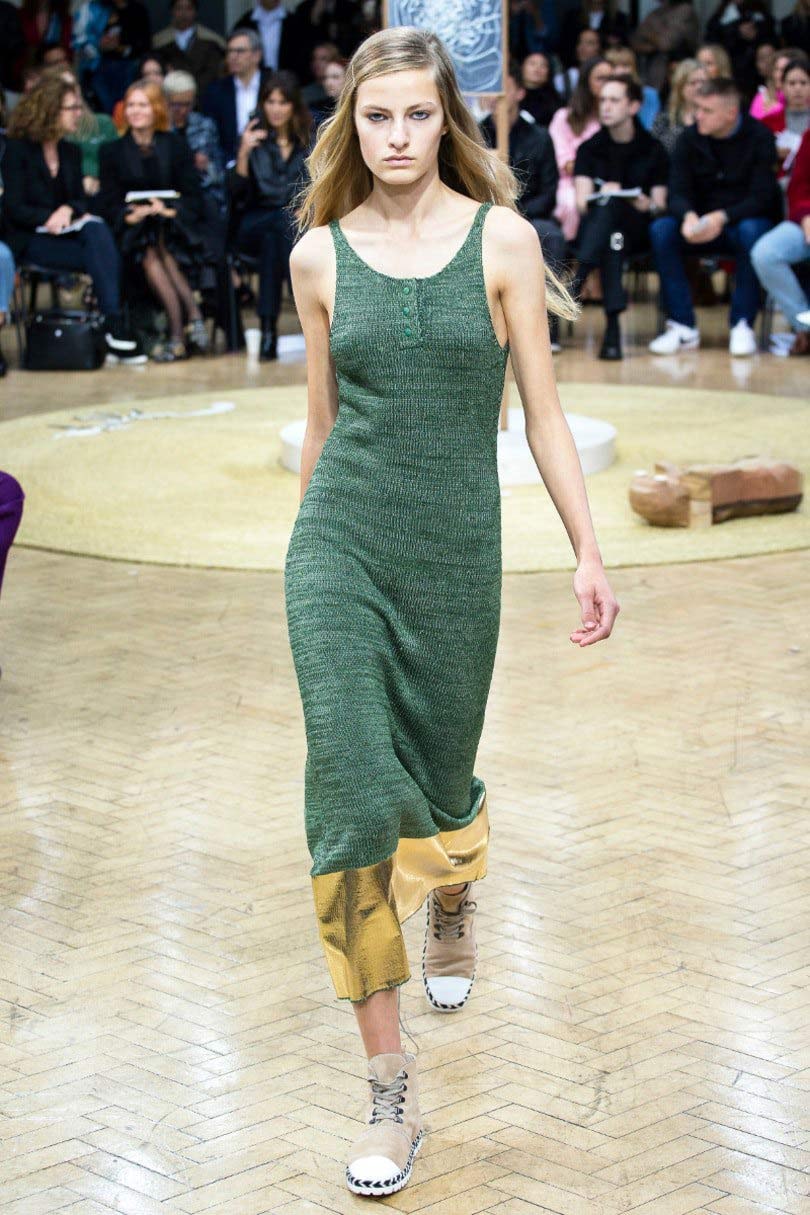 The garments conveyed a sense of comfort and familiarity, mixing both vintage themes, such as a corset-inspired top with modern touches, like napa cords. "I think we get very hysterical. I think media make us hysterical and I think sometimes you have to go back to basics,” said the designer on his collection inspiration.

Simone Rocha frequently turns to her own past and familial stores for inspiration for her designs, and for Spring/Summer 2018, she was inspired by her old Victorian china dolls. She used to push them down the banisters at home so the dolls faced cracked, and put them back together again. 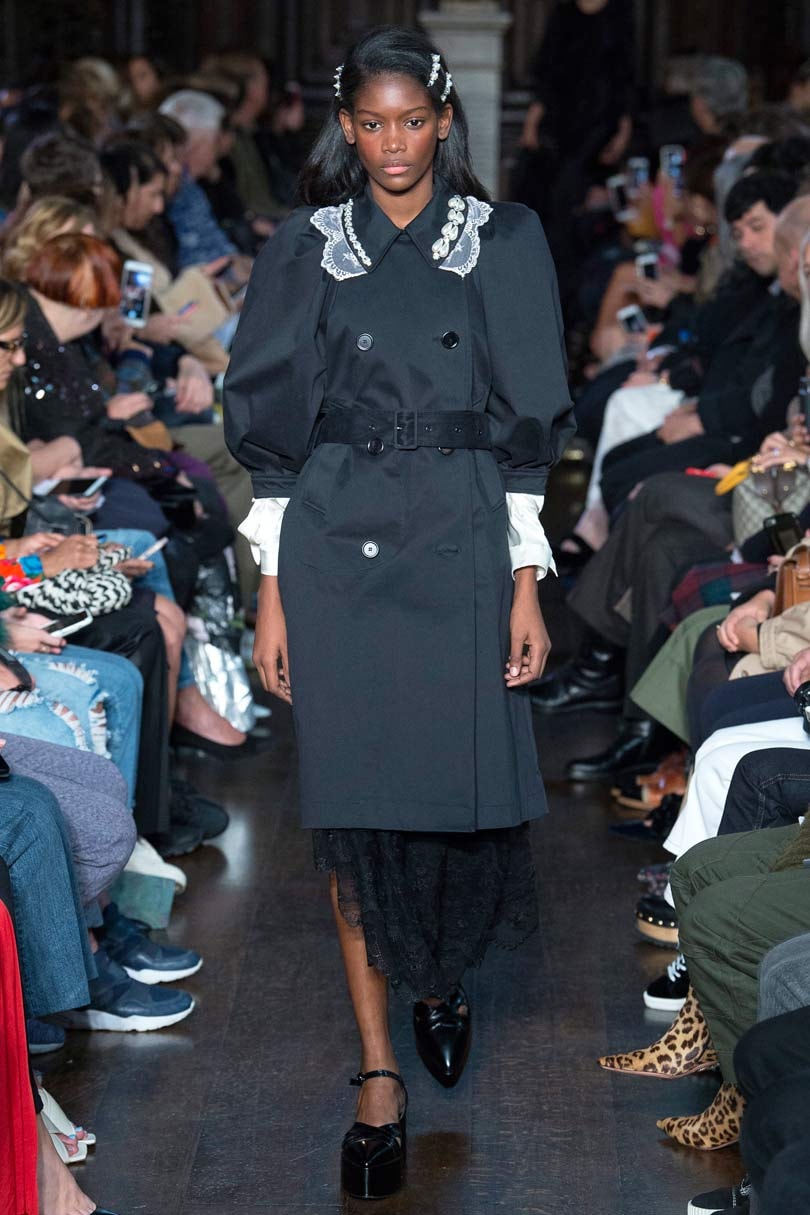 After unpacking them and playing with them and her daughter, she sought to create something that was both innocent, naive and playful. This was translated into broderie shirt dresses paired with tulle aprons over them, black fitted jackets decorated with white lace and ruffled cotton dresses which looked like nightwear.

Nostalgic for a more innocent past was a reoccurring point of reference for designers showing at London Fashion Week, as London-based designer Mary Katrantzou also returned to her childhood memories for inspiration for Spring/Summer 2018. She took a number of playful elements, such as lego blocks, friendship bracelets, beads and marbles and repurposed them for the adult world. 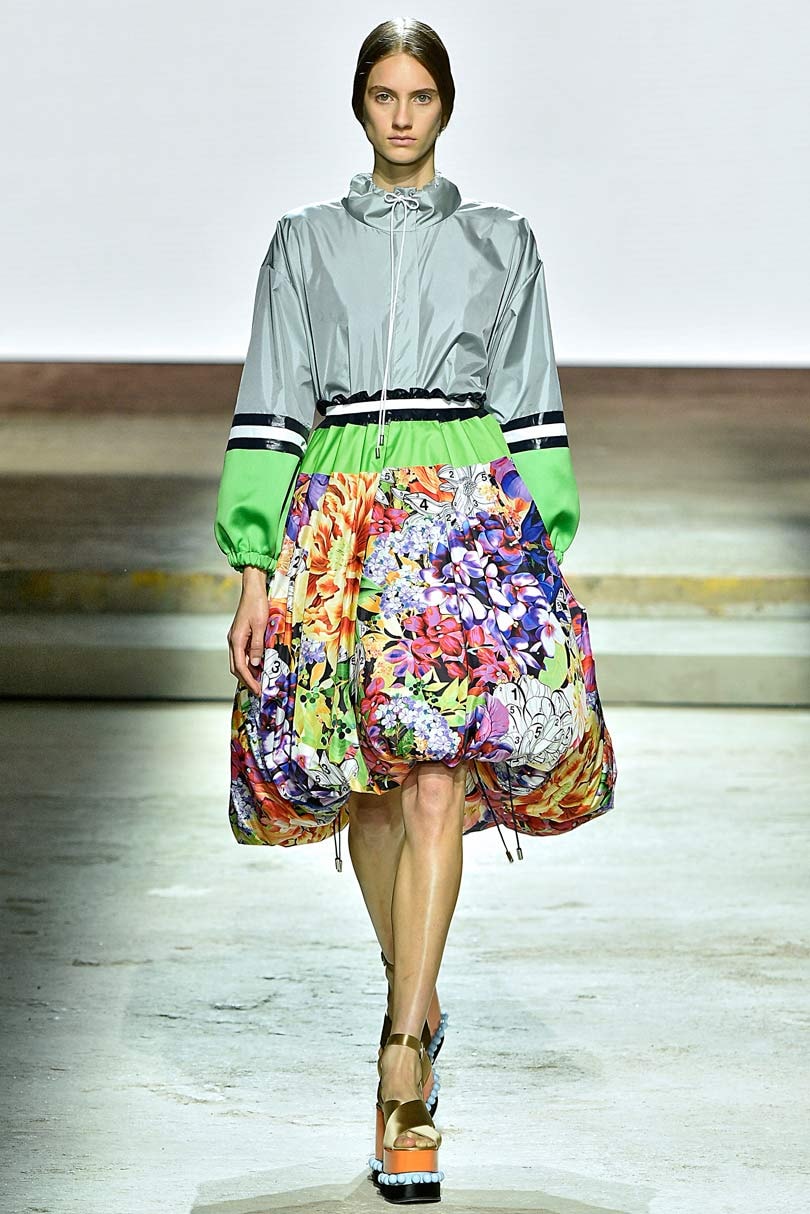 Puffed up skirts with floral patterns played on memories of inflatable swimming floats whereas bright vibrant nylon parkas gave the collection athleisure touch. The result is a collection which offers its wearers an underlaying sense of fun and brightness in dark period.

Alice Temperley reimagined summers by the French Riviera for Temperley London’s Spring/Summer 2018 collection, echoing a longing to escape the humdrum of daily routine. Palazzo pants, long cardigans and cotton jumpsuits in bright striped fabrics accompanied cinched in 1950s sundresses and calf grazing skirts. The colours used aimed to reflect the easy life in the South of France, and include lilacs, roses, pinks and peaches offering wearers a sweet flight of fancy from the real world. 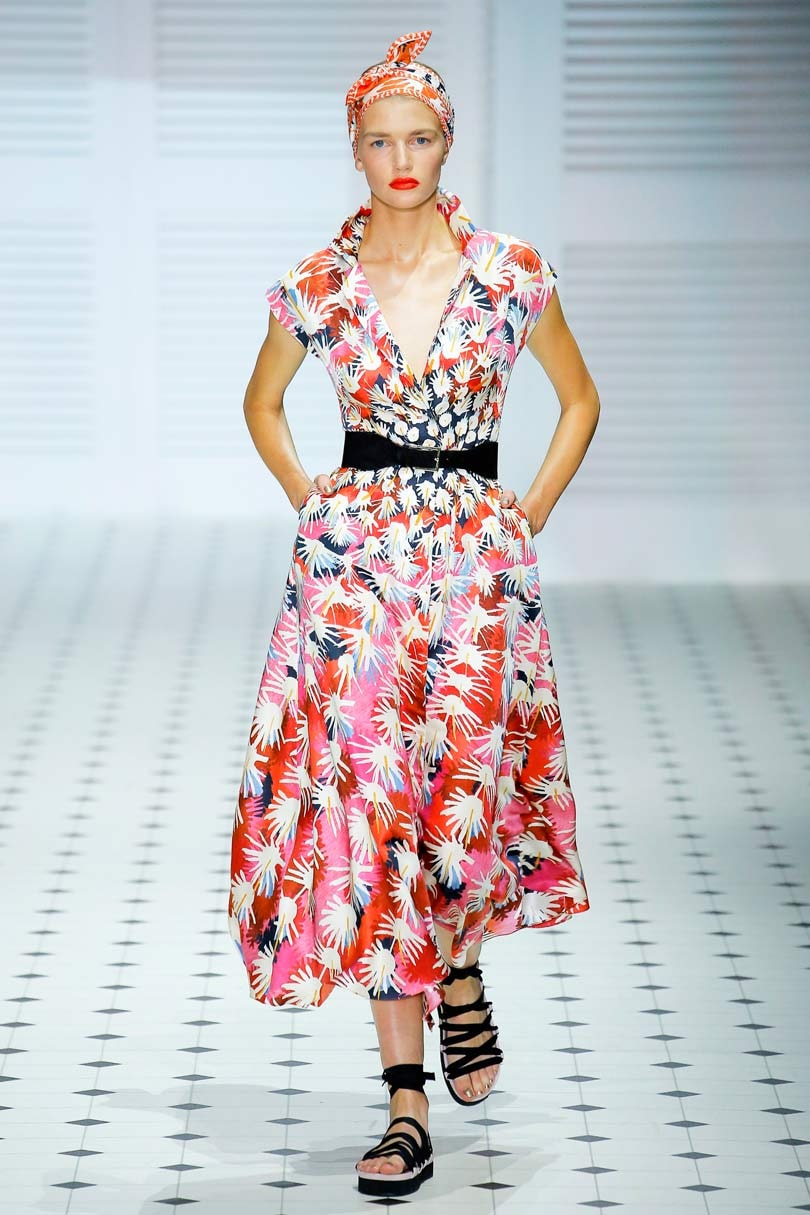