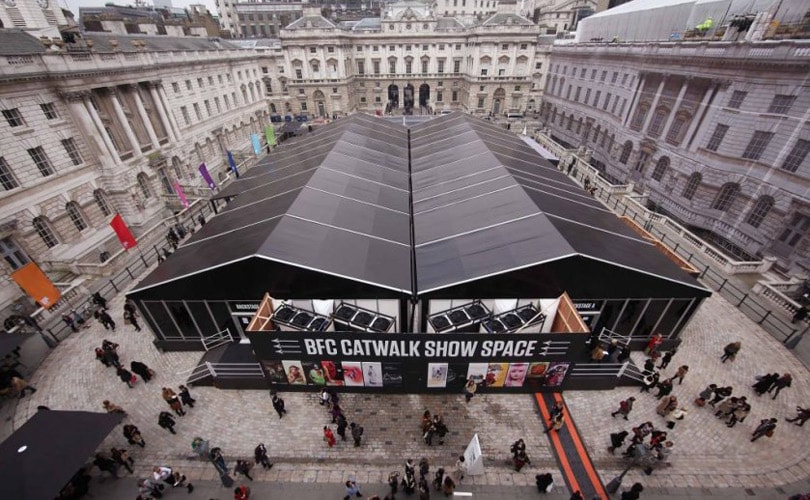 Hot on the heels of New York, London Fashion Week opens Friday with a cohort of young designers hoping to make their mark -- and a new venue to boot.

Leaving behind the institutional luxury of its former Somerset House setting, this year's show will be staged in the urban jungle of London's famous Soho entertainment district.

The 62nd edition of the world-renowned fashion event will this year bed down at the uber-trendy exhibition venue of Brewer Street Car Park, in the British capital's historic red light district, to showcase spring/summer 2016 collections.

Over five days, in the midst of bustling restaurants, sushi bars and sex-shops, the 1920s Art Deco building will welcome more than 150 designers, with dozens of other shows and presentations taking place across the city. "We just felt it was time for change, something new and exciting," Caroline Rush, chief executive of the British Fashion Council (BFC), told AFP. "We're in the fashion industry -- it's all about thinking about the new and reinventing what you're doing."

"London being the capital of designers who are a bit more edgy and cool, it's quite a logical evolution," said Laetitia Wajnapel, alias "Mademoiselle Robot", a Parisian blogger and photographer based in London. "Among the four big fashion weeks" (New York, London, Milan and Paris), London is "still the rebellious, avant-garde little sister," she added.

Like every year, London Fashion Week will offer a platform for young designers like Molly Goddard, Sadie Williams and Marta Jakubowski. It is in the DNA of the London scene to innovate, surprise, shock, anticipate, and invent, believes fashion blogger Kristabel Plummer.

"London is definitely one of the most creative fashion weeks, perhaps because of all the renowned fashion schools and inspiring hubs in Soho and east London," she said.

In addition, all eyes will be on established talent such as Jonathan Anderson, the artistic director of luxury Spanish leather goods brand Loewe. The 31-year-old, considered one of the most influential designers of the day, will present on Saturday the new collection of his own brand, J.W. Anderson.

Also on Saturday, fashionistas will be able to discover the creations of Anthony Vaccarello, creative director of Versus Versace, while British fashion heavyweights Vivienne Westwood Red Label and Burberry Prorsum will present on Sunday and Monday respectively.

"The highlights for me are the classic Londoners like Margaret Howell, Christopher Kane, J.W. Anderson or even Giles and Joseph, who every season set the tone of trends to come," said "Mademoiselle Robot". Kristabel Plummer predicted "an evolution of 1970s trends" already seen last year.

Fashion Week will also give prominence to new technologies, with live-streaming of many of the shows and a new partnership between the fashion label Hunter and video service Periscope. Also riding the social media trend, Burberry said it would hold a "first-ever Snapchat Show" for the platform's 100 million users ahead of the official catwalk on Monday.

The popular social network on Sunday "will reveal the collection looks as finishing touches are being made" in the fashion house's design studio. The posts will then disappear after 24 hours. There will also be an exhibition dedicated to Minnie Mouse, her influence on fashion and pop culture, with photos taken by model Georgia May Jagger, the daughter of Mick Jagger and Jerry Hall.

The BFC said womenswear sales in Britain are expected to climb four percent in 2015 to 27 billion pound (42 billion dollars, 37 billion euros). The figures from market research company Mintel also showed that two thirds of women will have made a fashion purchase online this year, while the figure is four out of five in the 16-25 age-group.