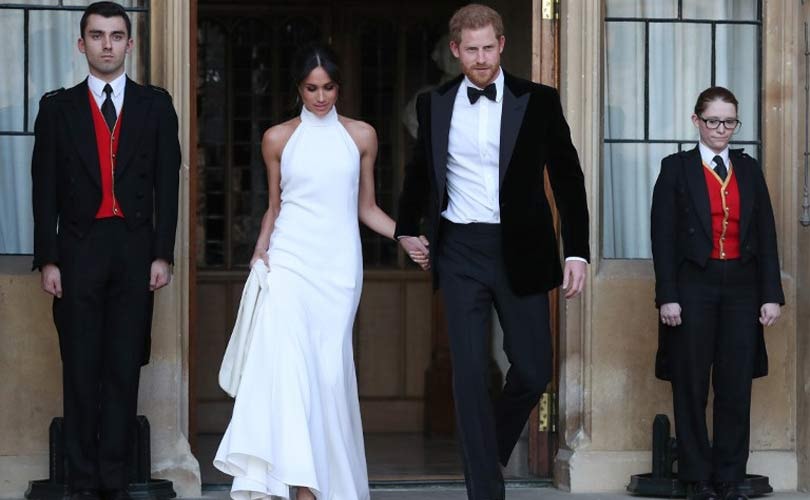 Having chosen to wear a haute couture wedding gown designed by Clare Waight Keller for Givenchy for her nuptials to Prince Harry, Meghan Markle, the new Duchess of Sussex, turn to another British fashion designer, Stella McCartney to design her second wedding dress for the evening celebrations.

Like Waight Keller, a British designer who is the first female artistic director of Givenchy, McCartney has made her own path in the fashion industry, from launching her own label in partnership with Kering in 2011, the fashion designer has since become the sole owner of her eponymous brand.

While the Duchess of Sussex’s nuptial gown had a bateaux neckline, long sleeves and a sweeping 5-metre veil, her evening wedding dress was a glamorous, sleeveless lily white silk crepe gown with a high neck, which she paired with Aquazzura satin shoes with baby blue soles.

The clean lines and silk fabric of the McCartney evening dress echoed the Duchess’ minimal, unembellished wedding dress that she wore for her walk down the aisle at St. George’s Chapel in Windsor.

“I am so proud and honoured to have been chosen by the Duchess of Sussex to make her evening gown and represent British design,” McCartney told WWD in an exclusive interview. “It has truly been one of the most humbling moments of my career and I am so proud of all the team on this stunning sunny royal day.”

The former actress wore her Stella McCartney evening gown to a black-tie dinner hosted by Prince Charles at Frogmore House in Windsor, which she arrived in style to in a classic silver blue Jaguar E-Type Concept Zero convertible, driven by her new husband, Prince Harry. The car had a custom license plate that read E190518, their wedding date.

The Duke and Duchess of Sussex depart Windsor Castle for a reception hosted by The Prince of Wales at Frogmore House, in a silver blue Jaguar E-Type Concept Zero. This vehicle was originally manufactured in 1968, and has since been converted to electric power #RoyalWedding pic.twitter.com/hRrxEUlFlJ

McCartney’s famous dad, Paul also shared on social media his pride at her achievements, sharing a photo of the Royal couple on Instagram with the caption: “Wow! How proud am I of my daughter Stella designing this beautiful dress for Meghan on this historic day! Congratulations all round.”

Waight Keller, has also opened up about her historic wedding dress design, calling the Royal wedding a “dream day” on her Instagram, while also revealing that she was on hand at the chapel, saying: “The moment they stepped out as the Duke and Duchess of Sussex - I was standing just inside making the final adjustments to the beautiful 5 metre veil before they descended the steps to their carriage”.

The British designer who joined Givenchy just over a year ago, added on her social media: “It will truly be the most memorable moment of my career.

“It was beautiful to see her so radiant and in love having worked many months together to create this magical moment such an honour and privilege.”

Sketches of The Duchess of Sussex’s #RoyalWedding dress, designed by Clare Waight Keller, have been released.

The Duchess and Ms. Waight Keller worked closely together on the design, epitomising a timeless minimal elegance referencing the codes of the iconic House of Givenchy. pic.twitter.com/A9ZFKVZmUz

Amal Clooney, with George Clooney arrives at the wedding of Prince Harry and Ms. Meghan Markle in a honey yellow midi dress with side tie detail in silk Cady, worn with head dress by @StephenJonesMillinery. . #StellaMcCartney #RoyalWedding

Female and British designers were also championed by the Royal couple’s wedding guests, with McCartney dressing Amal Clooney in a honey yellow silk cady midi dress with side tide detailing and Oprah Winfrey, who wore a blush, double tiered dress with lace trim made of sustainable viscose. While actress Priyanka Chopra wore a custom lilac suit featuring an asymmetric oversized collar and matching pencil skirt designed by Vivienne Westwood, and Victoria Beckham showcased one of her own designs, a navy split sleeve, keyhole dress.