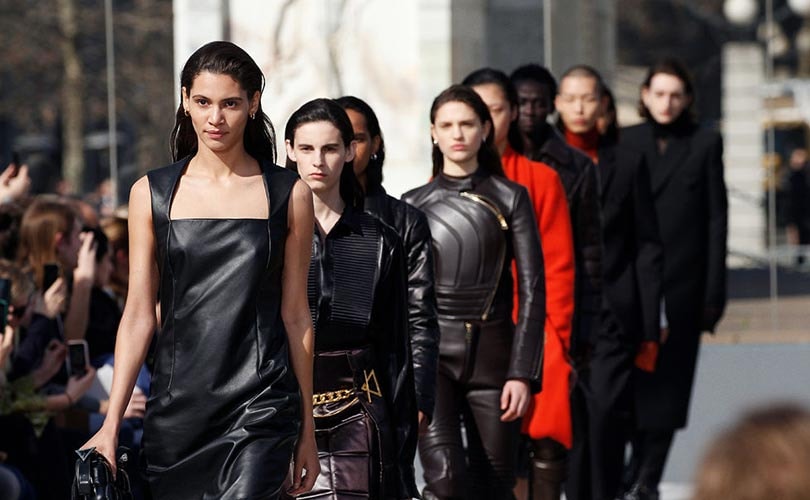 Describing a designer's first runway collection as 'a formidable debut' could by some readers be perceived as unenthusiastic on the part of the editor, but sometimes it is exactly that.

Daniel Lee's runway debut at Bottega Veneta ticked many of the right boxes, at what was a much-anticipated MFW event since his appointment as creative director last June. A former protégé of Phoebe Philo at Céline, hopes were high for Lee to embrace her triad of success, a merging of timeless modernity, anti-glamour and creating a de facto uniform of luxury staples. Albeit for the upper echelon of fashion shoppers.

The opening look of a leather shift, cut straight at the neck with a side panel merging into the shoulder, was promising. This, and other utilitarian pieces and accessories will be the backbone of a new narrative at BV, where Kering is hoping to revitalise it into a multi billion euro business.

Last year BV saw a decline of 5.7 percent to 1.1 billion euros, but a younger and new creative director could spell growth, as is Kering's experience when it appointed new design directors at Gucci and Balenciaga. The company is aiming to change the brand into a “total” fashion trademark, where currently leather goods account for 84 percent of sales. There is much growth potential in other categories, like footwear, accessories and clothing.

Lee, who hails from the UK, may have cut his teeth under Philo at Céline, but leading an Italian heritage brand, notable mostly for its leather goods, would never be an easy task. But unlike Raf Simons, who's intellectual take on fashion was a detriment to Calvin Klein, at Bottega Veneta there is room for artistic expression without upsetting the masses.

Where Lee triumphed, was in knitwear, like an elongated ribbed turtleneck cutaway on the flank and layered over another sweater, or knitted dresses that hugged the body and came in sumptuous wools. Sweaters with gold-chained necklines will be easy to sell statement items, as will the bags.

Where things got tricky was in a tendency to over design, like a belted leather skirt in BV's intrecciato signature, but this time with the leather inflated. On the catwalk it looked bulky. The same leather was worked into coats and bags (on the latter it worked brilliantly). There were biker jackets, in fact a whole biker story, which on women felt heavy and complicated, and worked better as menswear. Squared-toed leather pumps were the antithesis of the glamour shoe and looked great on the runway, but may not flatter customers IRL. Boots were solid, perfect for marching, but perhaps less matched to the slinky dresses they accessorised.

Bottega Veneta has long championed itself as a go-to label for logoless luxury, and long may this continue. Lee ushered in a new era with a flare for the utilitarian and some unexpected experimentation.