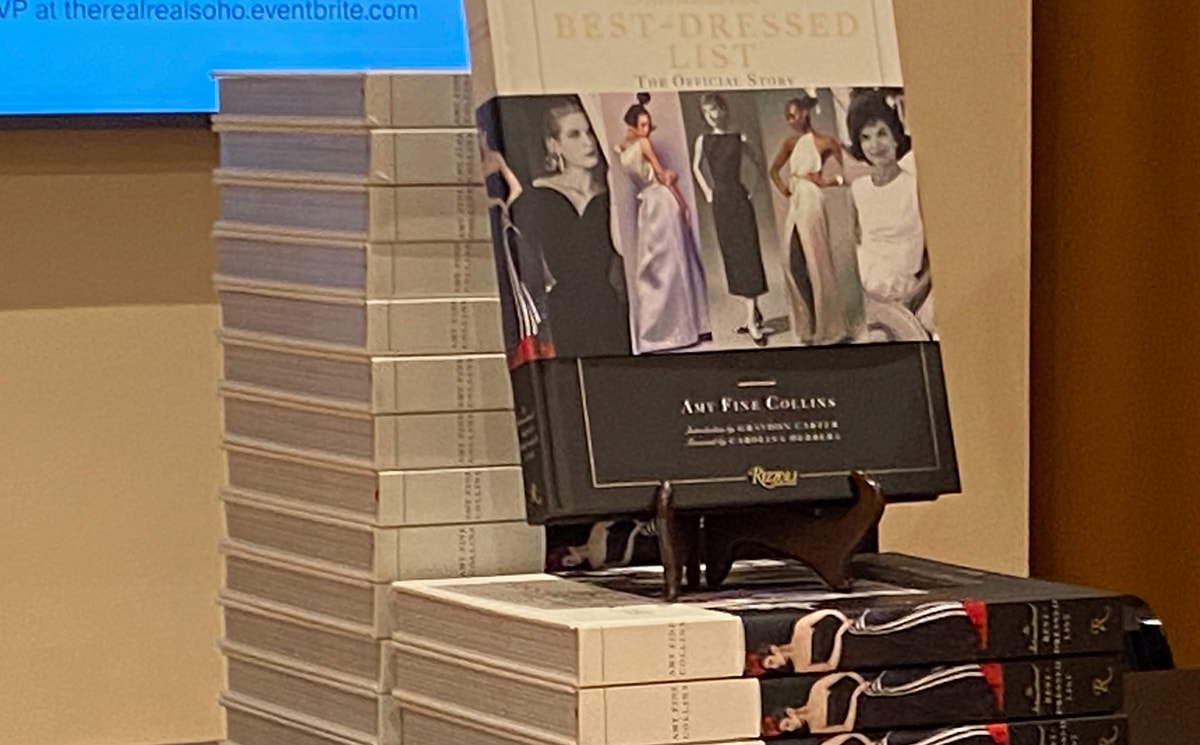 The International Best-Dressed List might seem like an elite and peripheral phenomenon to the average stylish American, but it lies at the heart of our modern fashion industry. Founded in 1940 by Eleanor Lambert, who was behind the Met Gala, Fashion Week, and who established the Council of Fashion Designers of America, it was intended to stimulate the business of buying fashion during a wartime slump. The concept of fashion as a competitive sport proved successful, and in 2002 the List was bequeathed by Lambert to Amy Fine Collins who last week appeared at The RealReal’s Soho flagship to launch “The International Best-Dressed List,” book and to chat about Lambert’s archives which contained letters from Audrey Hepburn.

Former Geoffrey Beene muse and current favorite of Thom Browne, Collins is a witty raconteur, bubbling with anecdotes. She begins the evening late, drawing attention to one of the perils of looking the epitome of chic in her head to toe trompe-l’oeil Thom Browne outfit: there was nowhere to clip her microphone.“All the pockets and lapels are an illusion.”

The style-makers chronicled within the book go back to oil heiress Millicent Rogers who appeared on the first list, and was famous for changing outfits three times during dinner accessorized with an arm full of Southwestern jewelry, or Rosalind Russell who was its first Hollywood figure. Wallace Simpson, the Baltimore divorcée behind King Edward VIII’s abdication of the British throne, is included for her penchant for head-to-toe matching color, and Grace Kelly, Hollywood’s Hitchcock blond, who paved the way for Megan Markle by flitting to Europe to marry a prince. Says Collins of Babe Paley, “She was considered the paragon of chic, and they said of her, ‘She had only one flaw, and that was that she was perfect.’” 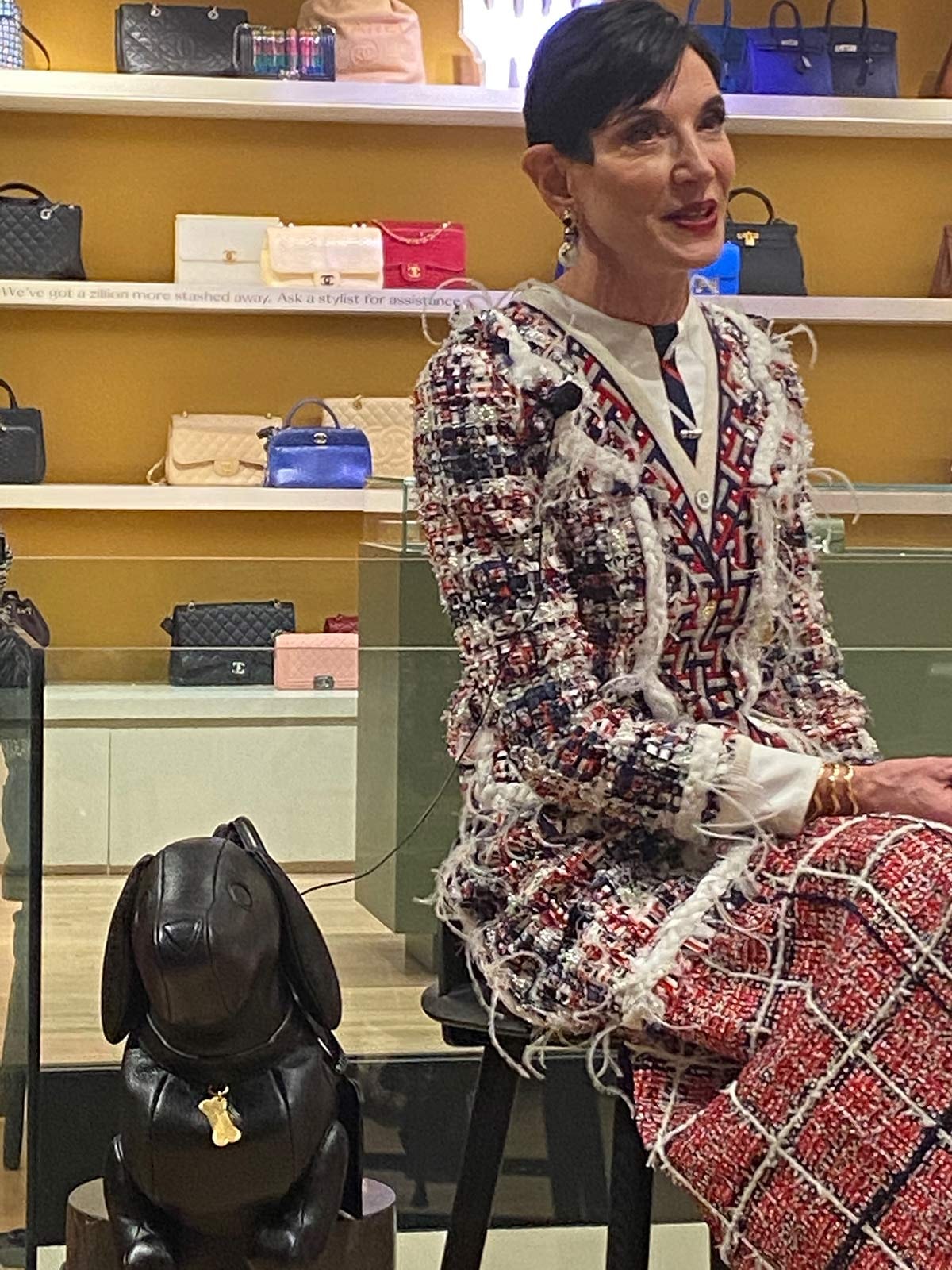 New book celebrates glamorous fashion icons of the past

Joining Collins for the chat is fashion commentator/author/TV personality, Simon Doonan, who makes the contrast between the power of female sophistication associated with the 30s and 40s and today’s prevailing trend to dress young, with teenagers and their grandmothers wearing the same clothes. This prompts Collins to quote Edith Head, “Your clothes have to be tight enough to show you’re a woman and loose enough to show you’re a lady.” In her opinion women of those glamorous eras “weren’t trying to look hot. Wasn’t it Mainbocher who said he could not only make a woman look like a lady, but like her mother had been one as well.”

The tome’s other style icons include Pat Cleveland dressed in Halston; Austine Hearst, wife of the magazine tycoon, in Charles James; C Z Guest famous for her understated American sensibility who popularized the jeweled sweater and said “Clothes will last if you hang them up;” Marlene Dietrich who only made it onto the list in her 50s; and Diahann Carroll who became the list’s first African American woman. “Everybody had to up their sartorial game around Diahann Carroll,” says Collins who also describes Jackie Kennedy as “The most influential woman that ever existed.”

Inspiring others to want to look like you is what unifies all those selected for the Best-Dressed List but it’s not always about what you wear, remarks Collins, pointing to an image of Liza Minnelli in an unbuttoned shirt, with that distinctive hair and make-up: “If you have real boobs, show them.” Fashion’s tragic muses are also featured, Tina Chow who threw on vintage clothes so glamorously long before vintage became popular, or Isabella Blow who wore a real lobster on her head and when it started putrefying throughout the day delighted in its people-repelling qualities.

These remote, arch figures who boasted a string of husbands, high connections and financial misdeeds, eccentricity and the utmost self-involvement still somehow seem more fabulous than our modern-day fashion influencers. What is their secret?

“Looking chic is also looking cruel,” offers Doonan, who believes Rihanna has the same qualities as those fascinating females of the past. “It’s having what the French call le chien, which means a certain toughness and makes one very mysterious.”

“I subscribe to that,’ agrees Collins. “Because you’re not dressing to please, it’s not an act of desperation.” Then she lifts her Thom Browne leather dog-shaped purse, and says playfully, “This is le chien.”