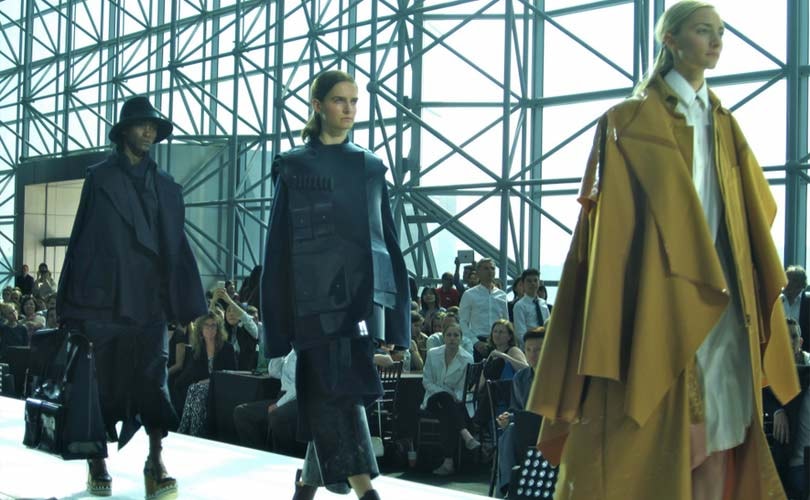 New York - Outside the River Pavilion, the sun glimmers off the Hudson; inside, Parsons student collections dazzle on a raised white runway. It is the annual Fashion show. A rigorous judging system ensures that only a select number of BFA students get to show three looks on this special night. Many of the Class of 2015 will graduate and go on to successful careers without having experienced the luster of this event attended by industry heavyweights. (One of the highlights of the evening will be Anna Wintour presenting Marc Jacobs, a Parsons alum, with an award for his contributions to fashion.) The stakes are ever higher for the school as just last month Parsons was named best school in the US for art and design, and number two in the world, by the Quacquarelli Symonds World University Rankings.

The show kicks off with an unabashed return to the traditionally feminine world of domestic arts and crafts: patchwork, quilting, hand stitching, braiding, but in colors anything but demure. Not for the homely wallflower with nowhere to go at night, these clothes ooze personality and indeed the enquiry, “Are you fabulous?” embroidered onto the cuff of Janet Kawai Yeung’s oversized blazer deserves at the very least a finger snap or hair flip in response.

Lea Germano’s quietly manic medley of pinks stride by and the small scale prints recall those of your favorite pjs when it’s a “work from home day” but the concept is finessed with elbow to wrist flared pleats, bold jewelry from copper piping and heathered knits. All this coziness jars joyfully with our venue, a glass and metal hangar-like section of the Javits Center whose structure mimics the scaffolding that currently seems to support most of this city. Carmen Gama’s sturdy outerwear in neon orange and acid green epitomizes streetwear in that it’s inspired by the construction workers behind the city’s incessant drilling.

The black and white geometry of Ethan Hon’s collection play tricks with the intersecting lines of our interior. Model and location in perfect synch, it’s a Steven Klein photoshoot waiting to happen.

But the most memorable color combination of the night is not so much a combination as a commitment. A trio of turquoise oddities troop by, acolytes of blue. They look purposeful and eerie and lyrical and I can’t help but admire Shen Zhang’s focus; he must have been immersed in his own Picasso-like Blue period, to sew piece after piece in this singular hue without palette cleansing. It is a statement and very effective. 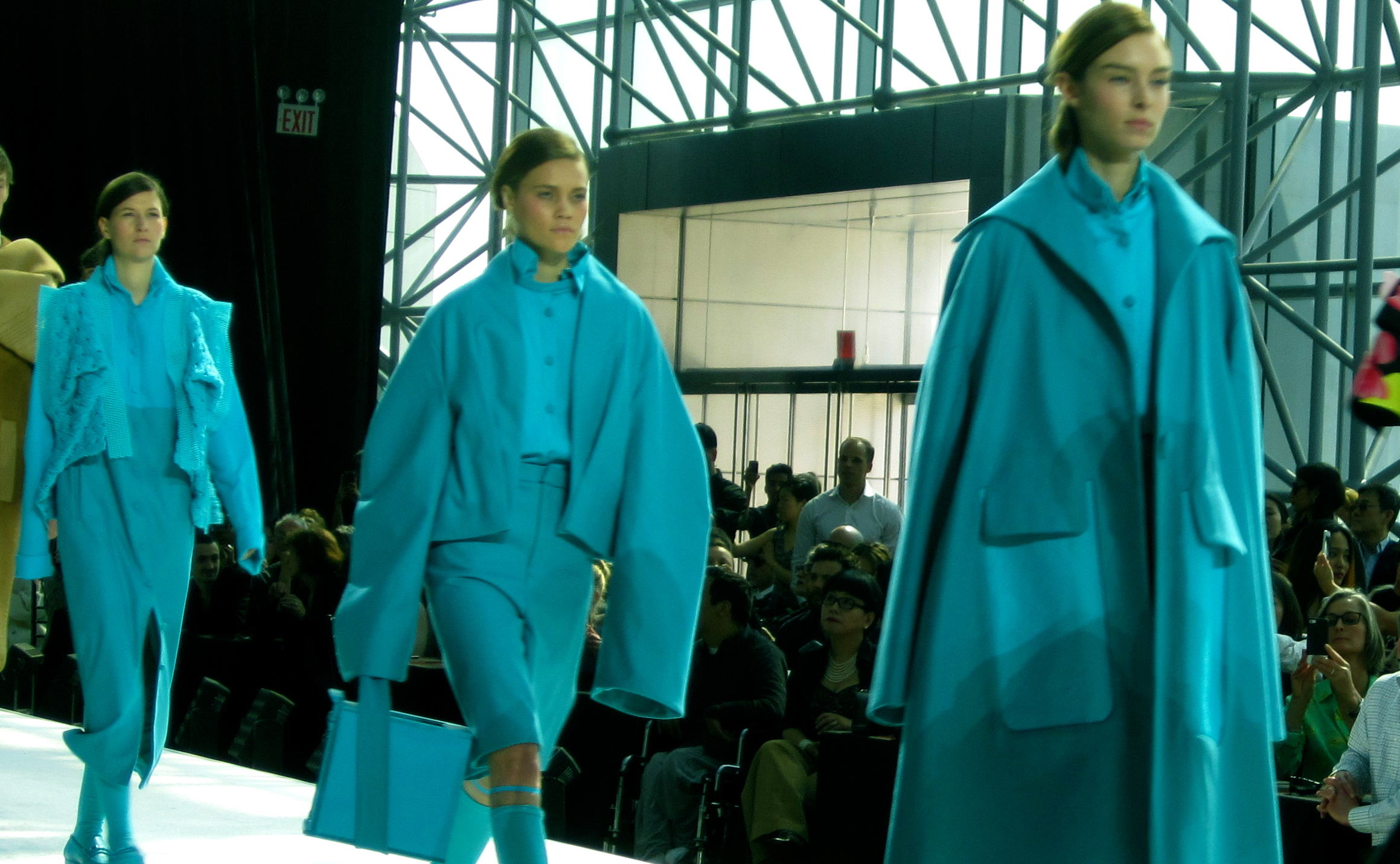 Flavors of the East celebrated in the Met’s summer exhibition, China: Through the Looking Glass, are in evidence but, pleasingly, in menswear for a change. Jon Max Goh’s mile-wide culottes and oriental floral-sprigged jewel-toned kimono cuts, and Siying Qu’s origami-inspired backpacks that fold like envelopes are perfectly in step.

Kubrick’s 2001: A Space Odyssey is the inspiration for Xuan Zheng’s richly embellished collection which is too faithful an homage to the style of Miuccia Prada, but it leads us to Xuewei Wang’s tunic with transparent panels that looks almost surgical especially when worn with double-paned goggles clamped fast to the head and nifty flat purses that might contain files of important findings fresh from the lab. 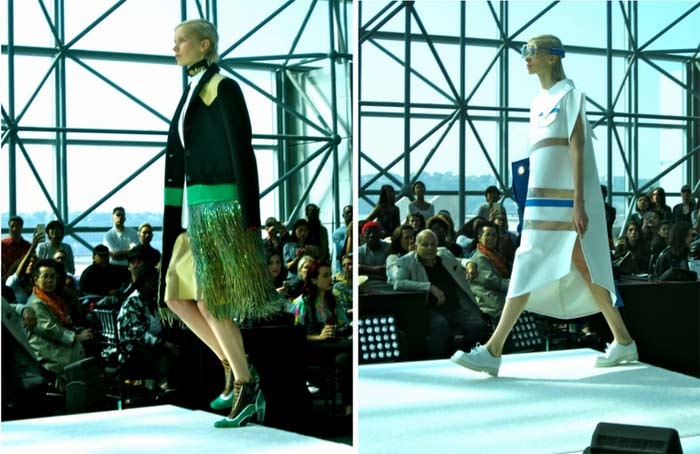 The concluding collection by Blair Moore, which has already won multiple prizes including the Saga Fur award and Kerings design award, answers the wardrobe needs of destination travellers. Her three models blanketed in leather-accented ponchos riddled with pockets and compartments look like overachieving jetsetters bound for glamour despite the uninhabitable wasteland into which they have landed. 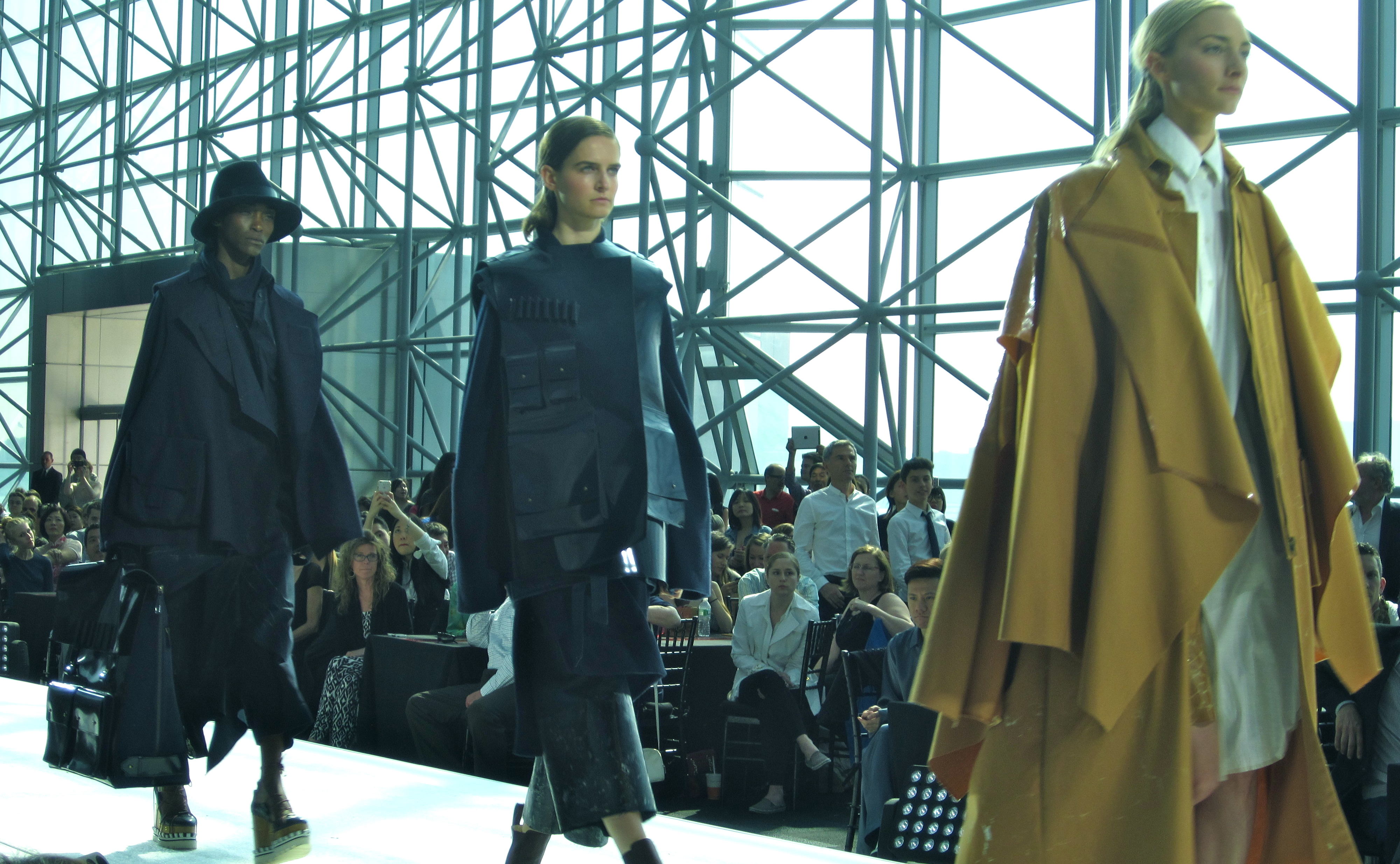 The final words of the evening are from departing Dean of Fashion, Simon Collins, who quotes Alber Elbaz: “‘Success is like a perfume. It’s wonderful to smell but don’t drink it.’” Students, wise counsel. Now, go drink something else. You’ve earned it.