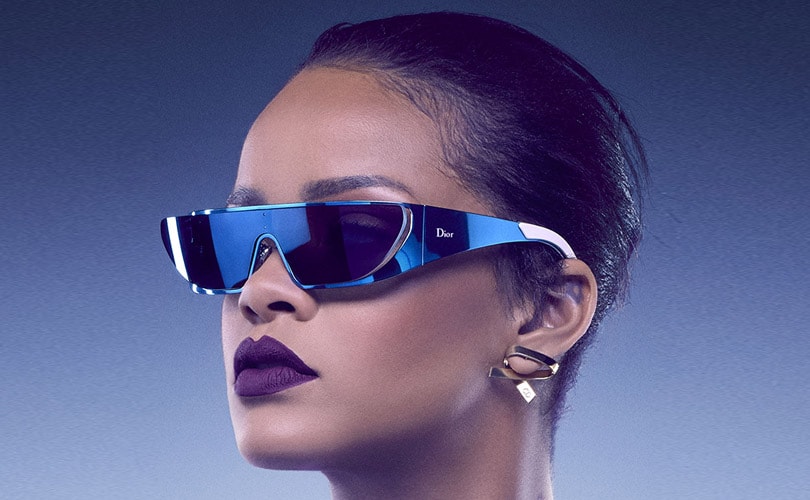 Rihanna and Dior collaborate on sunglasses

Iconic fashion house Dior still has not found a replacement for former creative director Raf Simons, but, in the meantime, the show must go on. The star of Dior's next show will be musician Rihanna. She has designed a range of sunglasses for the brand centered around a futuristic theme. The collection is simply titled "Rihanna."

Beginning in early June, the sunglasses will be sold exclusively at Dior stores. There is one frame available in six variations. The silver, pink, blue, green, and red styles will retail for 840 dollars, while a deluxe 24-karat gold-plated version will retail for 1950 dollars.

This is the second time the fashion house has collaborated with Rihanna. A year ago, Steven Klein photographed her for "Secret Garden IV," the campaign and short film shot inside of Versailles that featured Rihanna in Dior sunglasses, carrying the brand's handbags, and wearing looks from the Esprit Dior collection show in Tokyo in December 2014.

“We are very pleased to partner for the second time with Rihanna,” said Dior chief executive officer Sidney Toledo in a statement. “She is an artist, an entertainer, an entrepreneur, a philanthropist, and a style icon for today’s generation.”

Rihanna has really built her resume in the fashion arena. In addition to this collaboration with Dior, she also launched her Fenty Puma by Rihanna collection at New York Fashion Week last February, and she has signed a deal to be creative director of Stance socks for three years.

Rihanna has also made history with this Dior collaboration, as she is the first brand ambassador in the company's history ever allowed to design for the house. She has said that La Forge from "Star Trek" is the inspiration for the sunglasses.

In terms of the design process, she told WWD, “The process was pretty seamless. I spent a day at Dior with their eyewear design team. I started by looking through all the archives to see what they’ve done in the past, then got acquainted with all the new materials. I literally sat there and drew and drew until I was happy with the design, and the team illustrated it for me right then and there. We picked materials and colors that same day, and after that it was a matter of weeks before I saw the first prototype.”

There is no official campaign for this collection, although there is a series of in-house editorial images featuring Rihanna shot by Jean-Baptiste Mondino. Dior declined to comment as to whether or not they would do any future design projects with Rihanna.