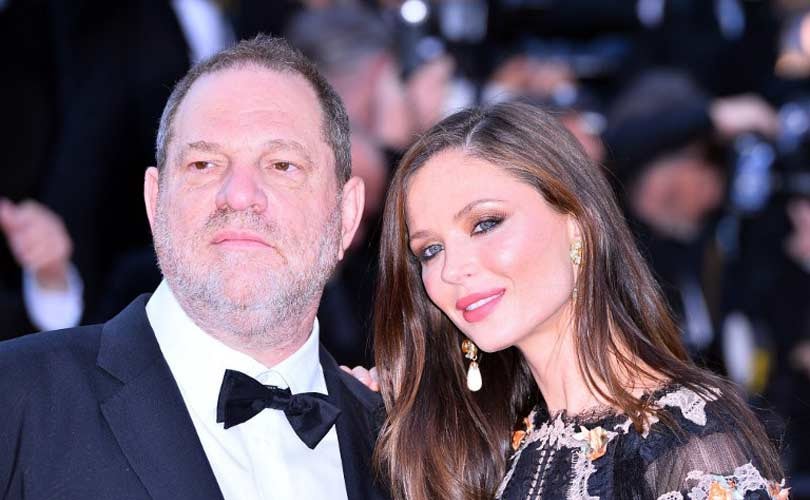 As the sordid layers of the Weinstein scandal are peeled back, truths about the fashion industry emerge. Until now both industries have operated behind a velvet curtain as they went about the glamorous business of creating illusions and objectifying women, but a new reality is creeping in.

So far we’ve heard scarce comment from the major figures in the fashion industry despite, or perhaps because, of Weinstein’s wife, Georgina Chapman, being one half of the design duo behind Marchesa. Fashion, like the film industry, might be said to close ranks and protect its most powerful until its hand is forced. And what little we have heard would have been better left unsaid. The response of Donna Karan, who considers Weinstein and his wife ‘wonderful people,’ amounted to lamenting about ‘how women are dressing and what they are asking by just presenting themselves the way they do…What are they asking for? Trouble.’ This from the woman who was awarded the 2016 Founders award by the Council of Fashion Designers of America, and who was one of the original boss ladies in fashion’s corporate and boardroom-led industry, whose powerful ad campaigns in the 80s suggested women––sexy, sensual-looking women––belonged behind powerful, even presidential, podiums. Now she asks, ‘Are we asking for it by presenting all the sensuality and all the sexuality?” Was the feminist message at the foundation of her business just an illusion to sell shapewear?

The New York Times called the fashion industry ‘the third pillar of Mr Weinstein’s power base.’ And it does seem to being doing its best impression of a pillar by remaining so stoically mute. From Katherine Hamnett meeting Margaret Thatcher at Downing Street in 1984 in a T-shirt that protested the prime minister’s nuclear policy to Maria Grazia Chiuri’’s Valentino T shirt which read ‘We should all be feminists” it might appear to outsiders that we’re useful for nothing more than printing our thoughts on merchandise. However during the past election season the fashion industry went collectively hoarse from its vociferous support for the country’s potential first female president, and a cacophony of designers’ have raised their voices in alliance with those marginalized or abused by Donald Trump. Where are their voices now? Do they somehow think this doesn’t concern them?

To Whom it May Concern

Harvey Weinstein was up to his neck in fashion: he brought Project Runway to our screens, and his wife to the judging panel. He revived 70’s label Halston and optioned the license to couturier Charles James. In 1994 he released Robert Altman’s Prêt-à-Porter, in 2009 he helped distribute Tom Ford’s A Single Man. French luxury giant LVMH owns a 1 percent stake in the Weinstein Company. Model Cara Delavigne is one of his many accusers as is former model Trish Goff, who tellingly revealed, “The horrible thing is, as a model, it wasn’t that unusual to be in a weird situation where a photographer or someone feels they have a right to your body.”

Weinstein speaking of his friendship with Anna Wintour to the Wall Street Journal in 2011, enthused, ‘Anna’s there, good or bad. When I wasn’t doing so well, Anna would throw a party and put me next to Bernard Arnault.’ She was often spotted next to Weinstein at fashion shows, and counted him as a regular at her annual Met gala. During her Conde Nast reign she has built strong ties between Vogue and Hollywood, featuring as many actresses as models on the cover. At the weekend she called Weinstein’s behavior ‘appalling’ and unacceptable’ and said that ‘We all have a role to play in creating safe environments where everyone can be free to work without fear.’

The creation of this safe environment is long overdue. Judging by the amount of models––girls and boys––who have responded to model Cameron Russell’s Instagram initiative which, created in the wake of the Weinstein scandal, gives models an anonymous platform under the hashtag #MyJobShouldNotIncludeAbuse to share their often horrific stories, the industry has a long way to go. As the sorry tales flood in, many marked with trigger warnings, the personal experiences of these often-underage victims sound staggeringly similar to the accusations made against Weinstein. Many of those sharing live with the knowledge that their abusers are still working in the industry, are even tied to prestigious brands. For over a decade models have been accusing photographer Terry Richardson of sexual misconduct, but the industry continues to work with him.

Those in our industry who have spoken out tend to focus their sympathy on Georgina Chapman. No one seems to have mentioned Keren Craig, the less famous half of Marchesa whose livelihood is equally in jeopardy. “I think the issue is no one knows what to say to Georgina, or the words to use,” said Steven Kolb, president of the CFDA. “But as a creative power and as a CFDA member, she is someone who deserves the industry’s support and backing.”

But don’t we have enough support to go around? Because the bigger question is what about the less established vulnerable figures, the anonymous assistants, the unconnected and naive models who are starting out going to go-sees and castings just like those actresses who fell prey to Weinstein in their early 20s? Where we stand on that is what’s important now. There’s no going backwards. Society will no longer tolerate the predatory bullying, rampant misogyny, and slow motion dismantling of rickety systems associated with these powerful image-driven industries. This is evidenced by the immediate swell of campaigns like #BoycottDKNY and #BoycottMarchesa.

When singer Bjork revealed on Sunday that she had been harassed by a Danish director, the details were similar to what we’ve been hearing. But it was her closing remark, standing in such stark contrast to the That’s just the way it is resignation we often associate with the problems of our industry, that left an optimistic impression: ‘Let’s stop this, there is a wave of change in the world.’