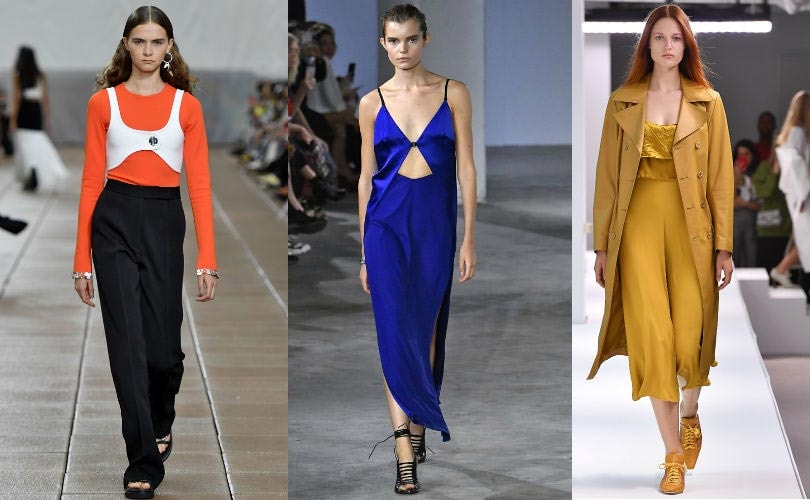 Earlier this week, Pantone shared the top 12 shades it predicted fashion designers to use in their Spring/Summer 2019 collections. In its biannual report, Pantone forecasted the colors of the season to be “empowering” and full of “confidence and spirit”.

...And they were right. FashionUnited spotted all of Pantone’s predicted colors on the catwalk of New York Fashion Week. 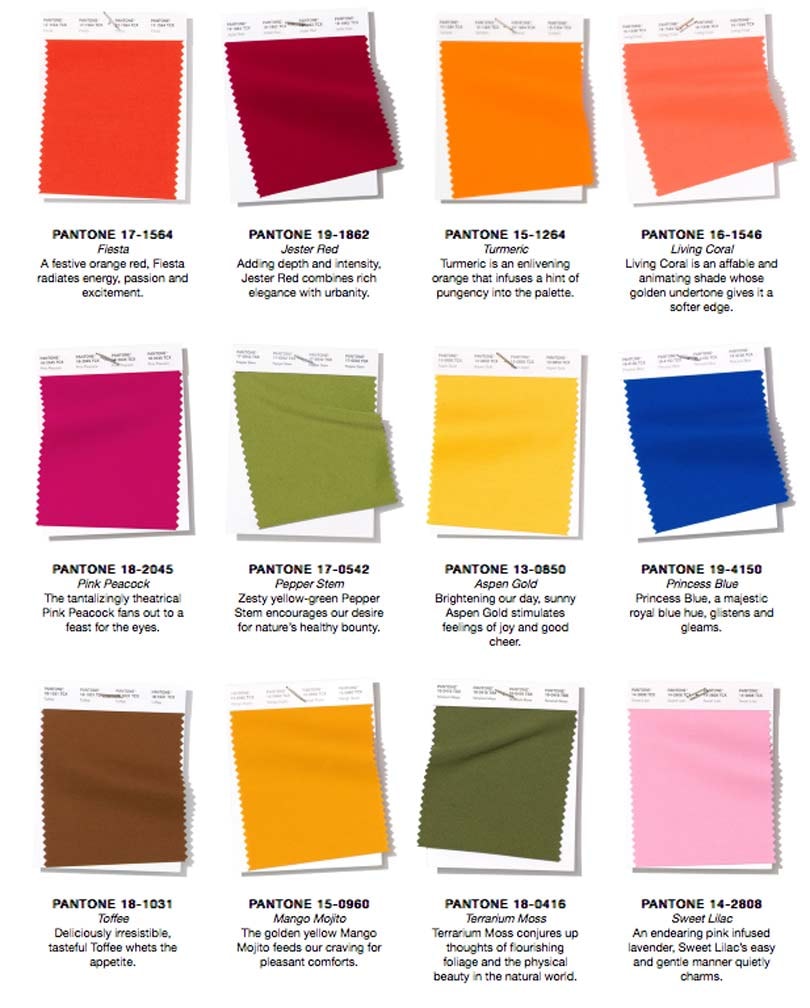 “Fiesta exudes energy, passion and excitement”, said the color authority. The shade appears in head turning dresses in the collections of Sies Markan, Priscavera and Self Portrait. 3.1 Phillip Lim also used Fiesta in four of his creations. For example, in a long-sleeve shirt combined with black pants and a white bralette top. 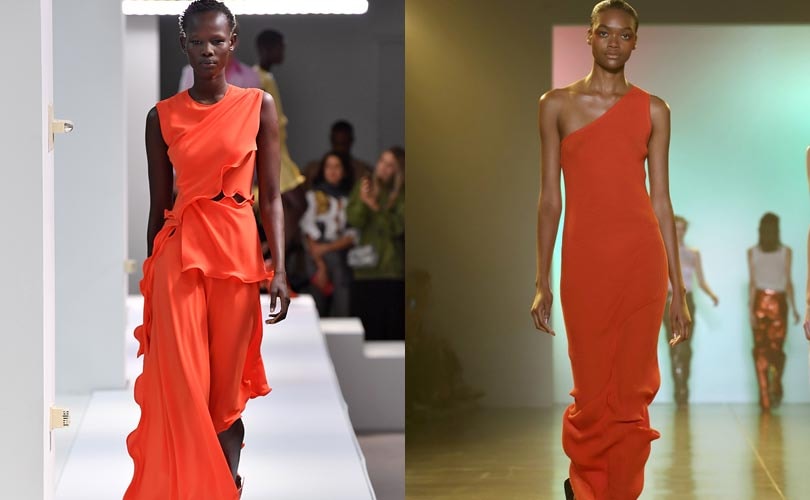 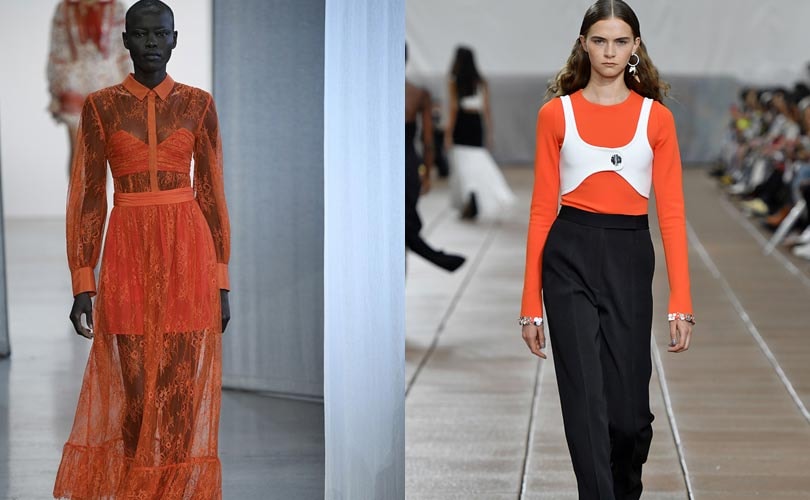 ”Intense”. That’s how Pantone defines this dark, elegant shade of red. It appeared on Alexander Wang’s catwalk in a long leather jacket. Lan Yu featured the color in capes while Tibi created a showstopping shirt-dress. 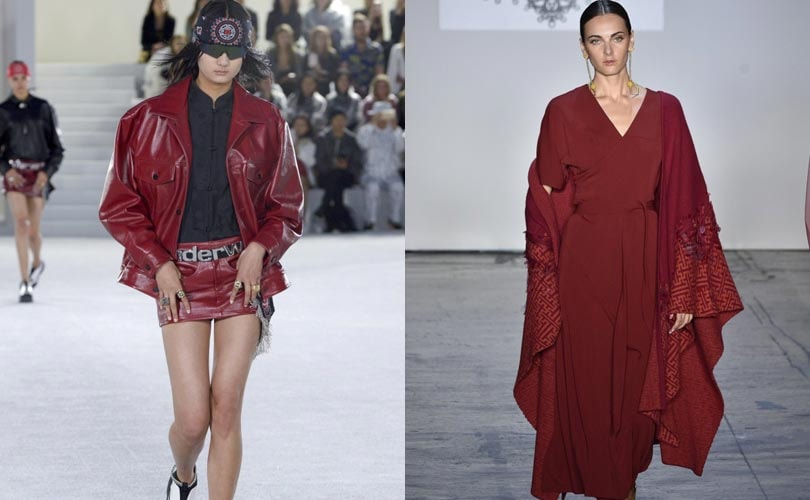 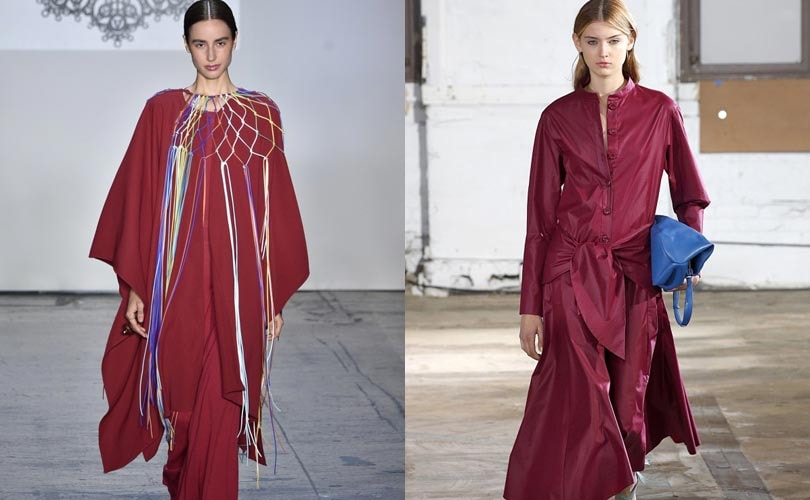 Escada covered a model in this “happy” orange from head to toe: a double-breasted jacket was combined with a shimmering dress, velvet clutch bag and vinyl shoes, in a stunning monochromatic outfit. 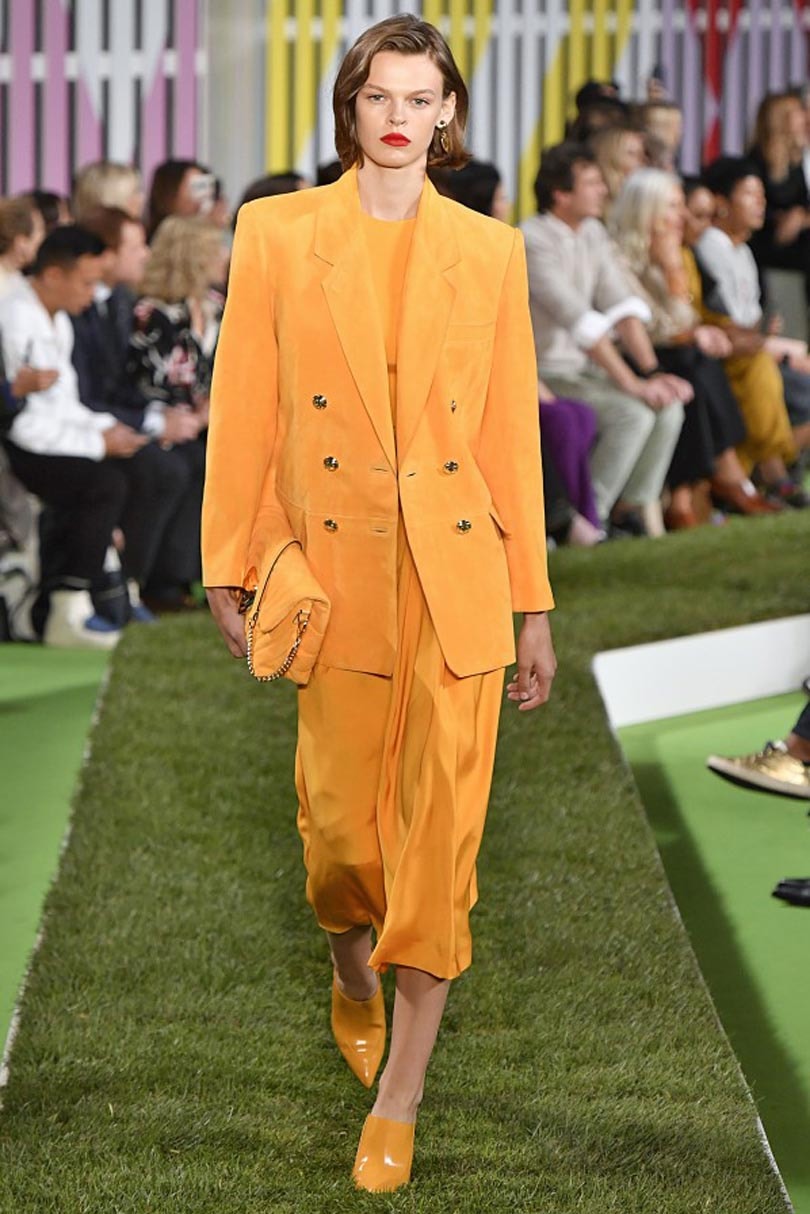 According to Pantone, Living Coral is a “friendly and inspiring shade with a golden undertone for a softer look”. The vivid color was spotted on Brandon Maxwell’s catwalk in both a casual chic T-shirt dress and an oversized suit combines with flared trousers. 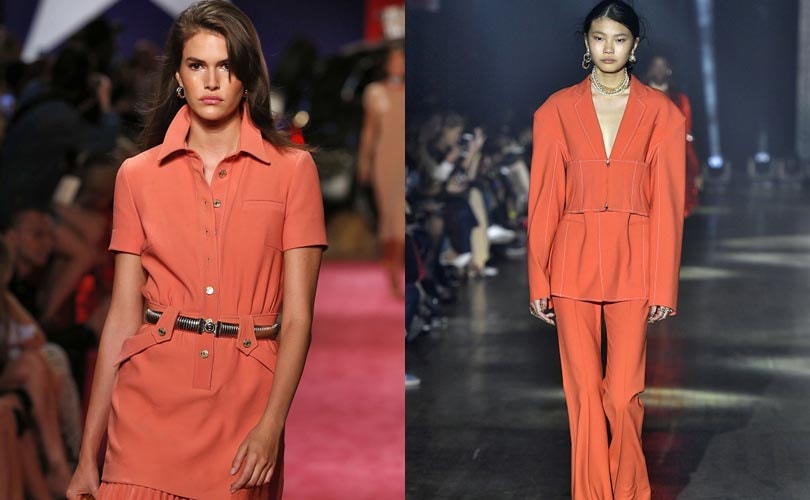 “This seductive theatrical color is a feast for the eye”, said Pantone. It is versatyle too, as fashion designers apparently believe it can go from the office to a gala party. Sies Marjan used Pink Peacock in a trench coat over a shirt dress, while Pamella Roland prefered to use the fuchsia shade in an extravagant layered party gown. Tadashi Shoji also used the color in an evening dress, combining it with a dark shade of purple in an ombré effect. Finally, Matthew Adams Dolan made an oversized 80’s-inspired suit in Pink Peacock. 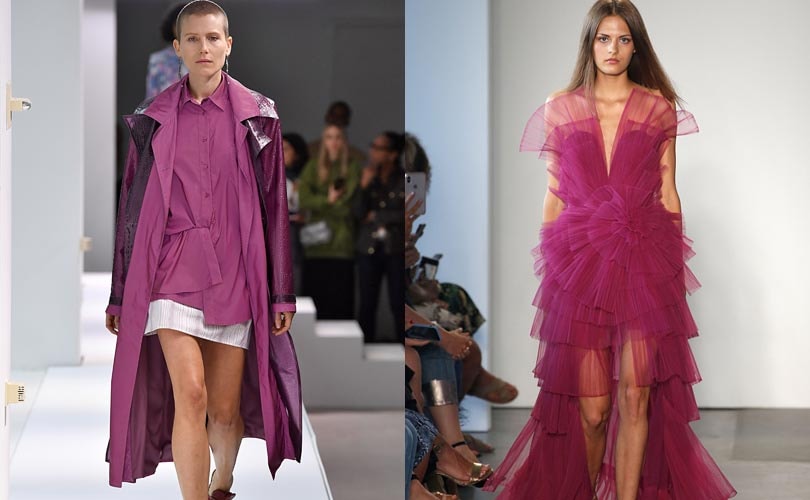 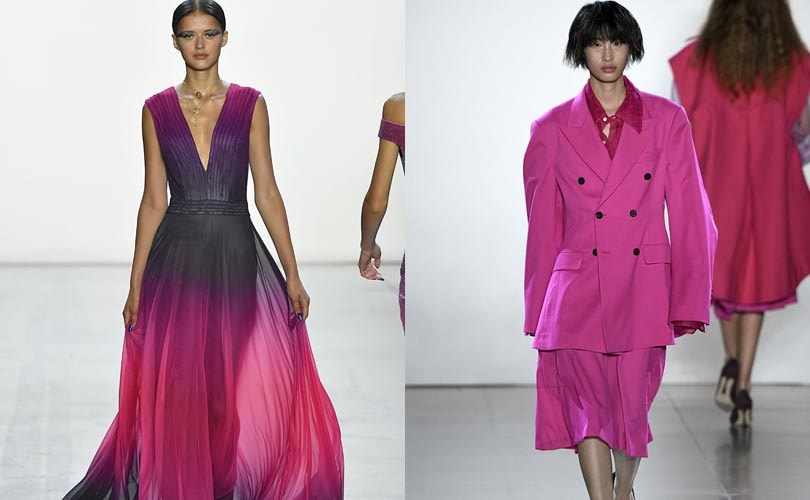 This is one of the two green shades Pantone predicts will be all the rage in the Spring/Summer of 2019. “This exciting green tone awakens makes one long for nature”, according to Pantone. The color was spotted in both Tibi’s and Mansur Gavriel’s fashion shows. 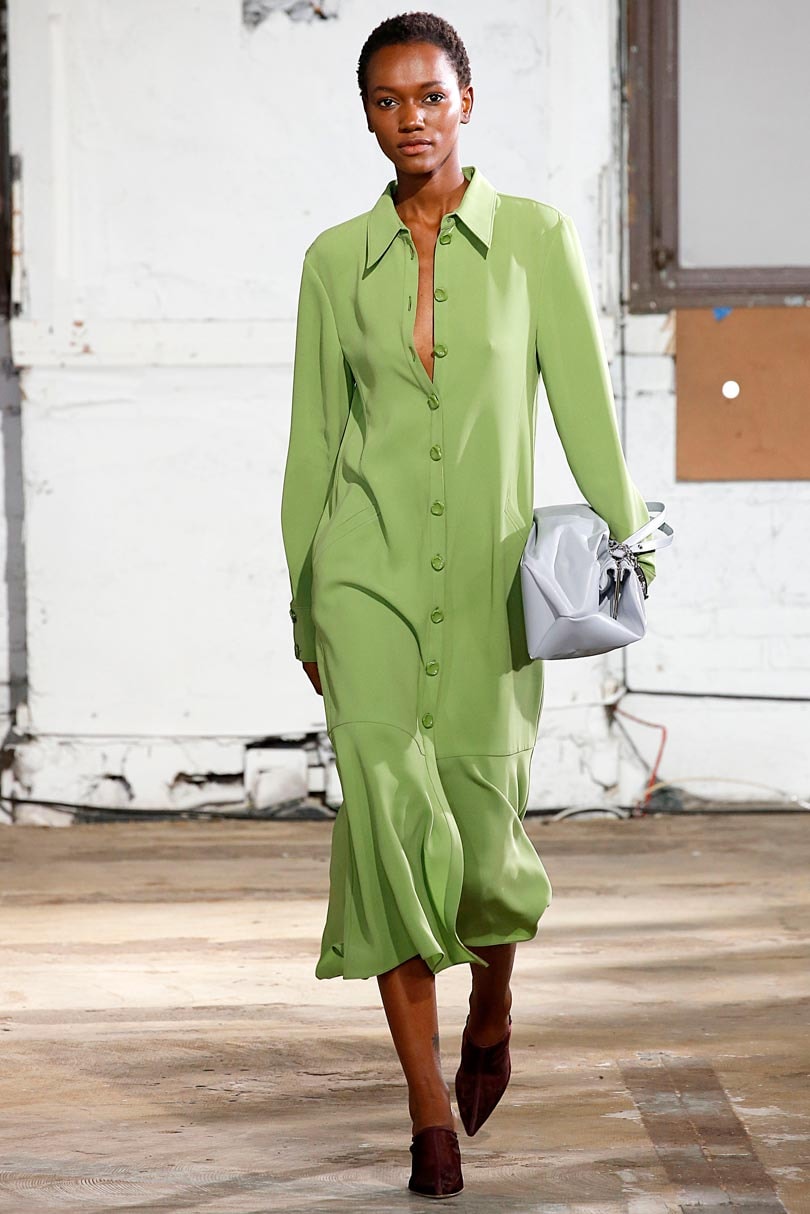 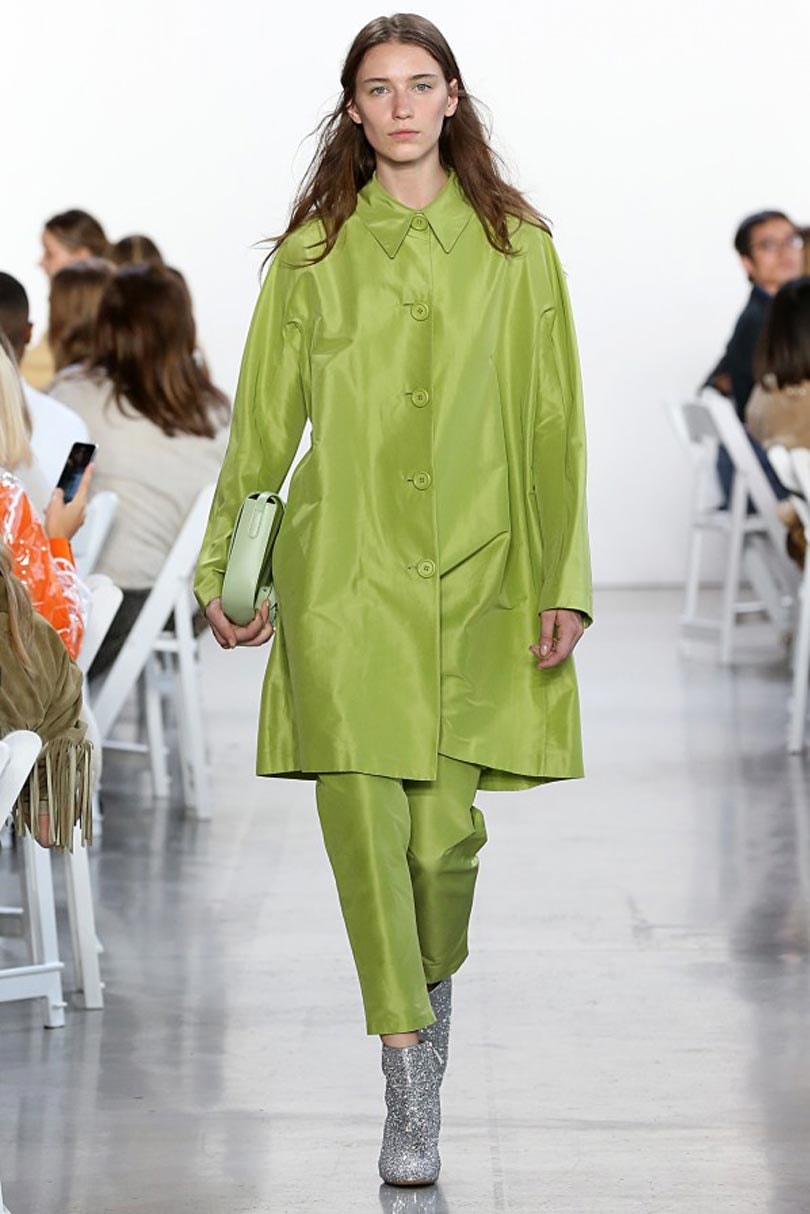 Pantone predicts two shades of yellow to dominate fashion in the Spring/Summer of 2019. Aspen Gold is one of them. This very bright yellow appeared in the streetwear looks of Pyer Moss and Kith. But it also goes well with a fancy evening dress, as seen in Milly’s and Pamella Roland’s fashion shows. Carolina Herrera also used this yellow in an embroidered coat and a pencil skirt, both combined with crisp white garments. Yellow has also appeared in slightly different shades in several other collections, including Sies Markan, Bevza and Tibi, who went for a pastel yellow, and Cushni, who chose an even brighter shade of yellow. 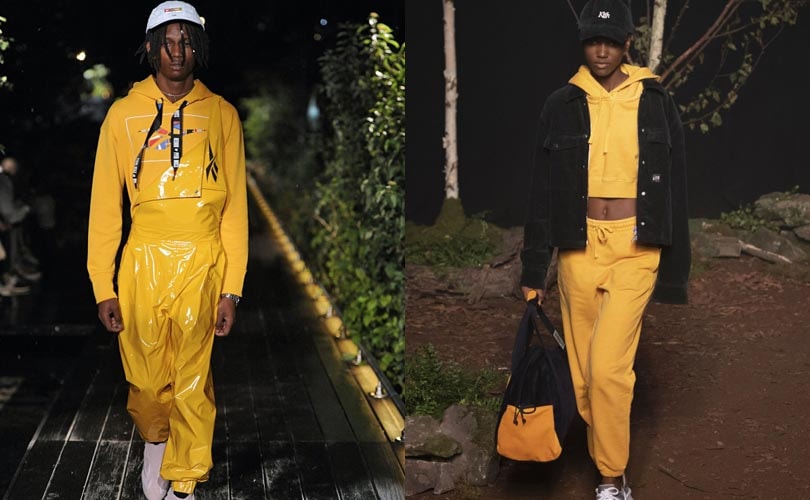 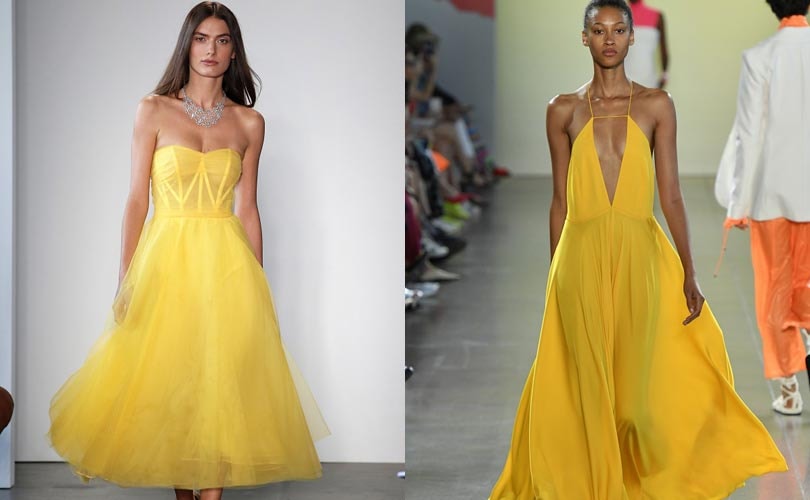 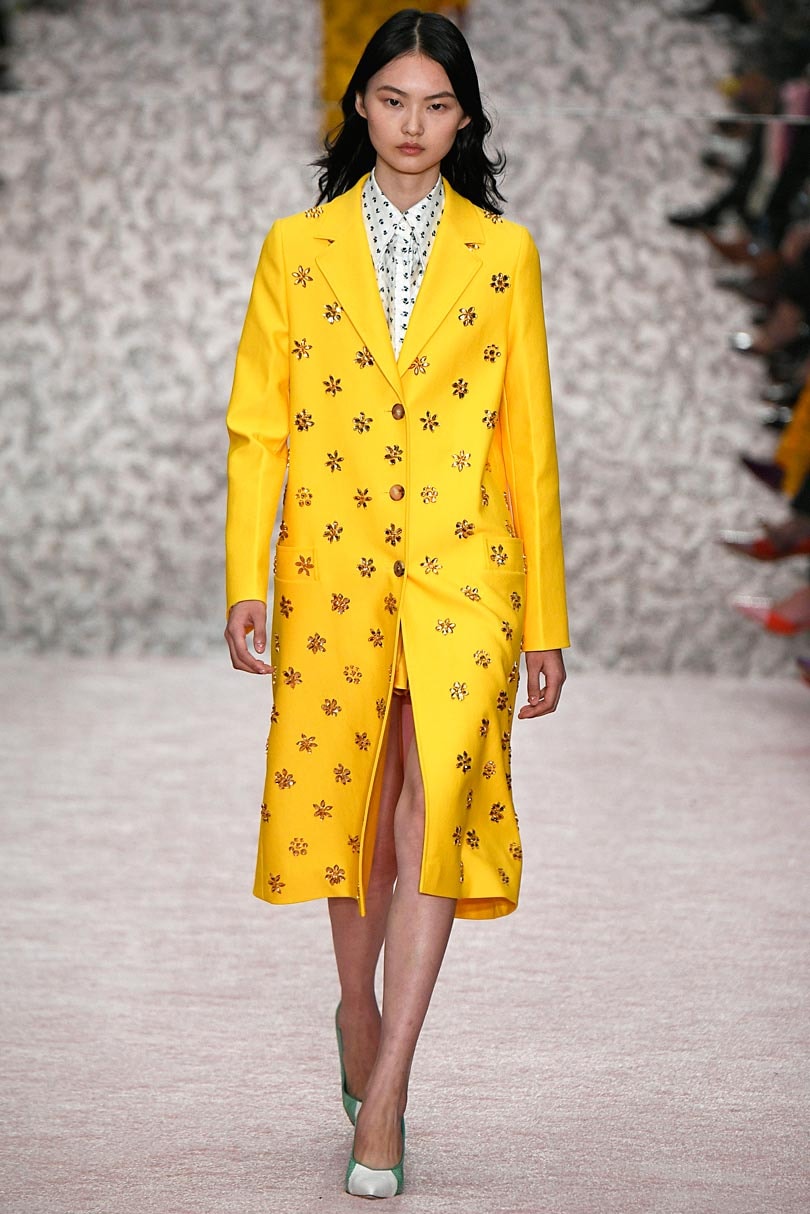 The name says it all: royal blue is majestic. Longchamp used Princess Blue in a velvet jumpsuit, while Dion Lee made a glamorous satin dress in the same shade. The color also appeared in Milly’s, Escada’s and Adeam’s collections. It’s the only shade of blue which made Pantone’s list. 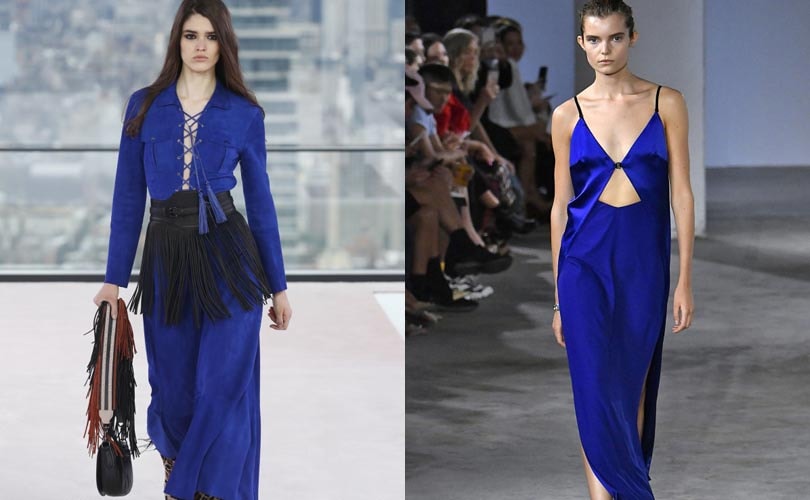 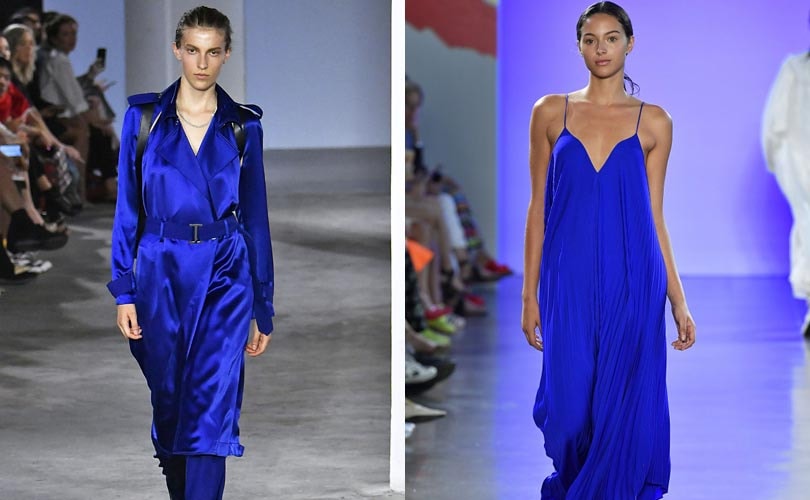 Brown is fashionable again. Pantone predicts this “tasteful” and “irresistible” shade of brown to trend in the Summer and Spring of 2019. The color appears in Cushnie’s collection in both a jacket and an evening dress. 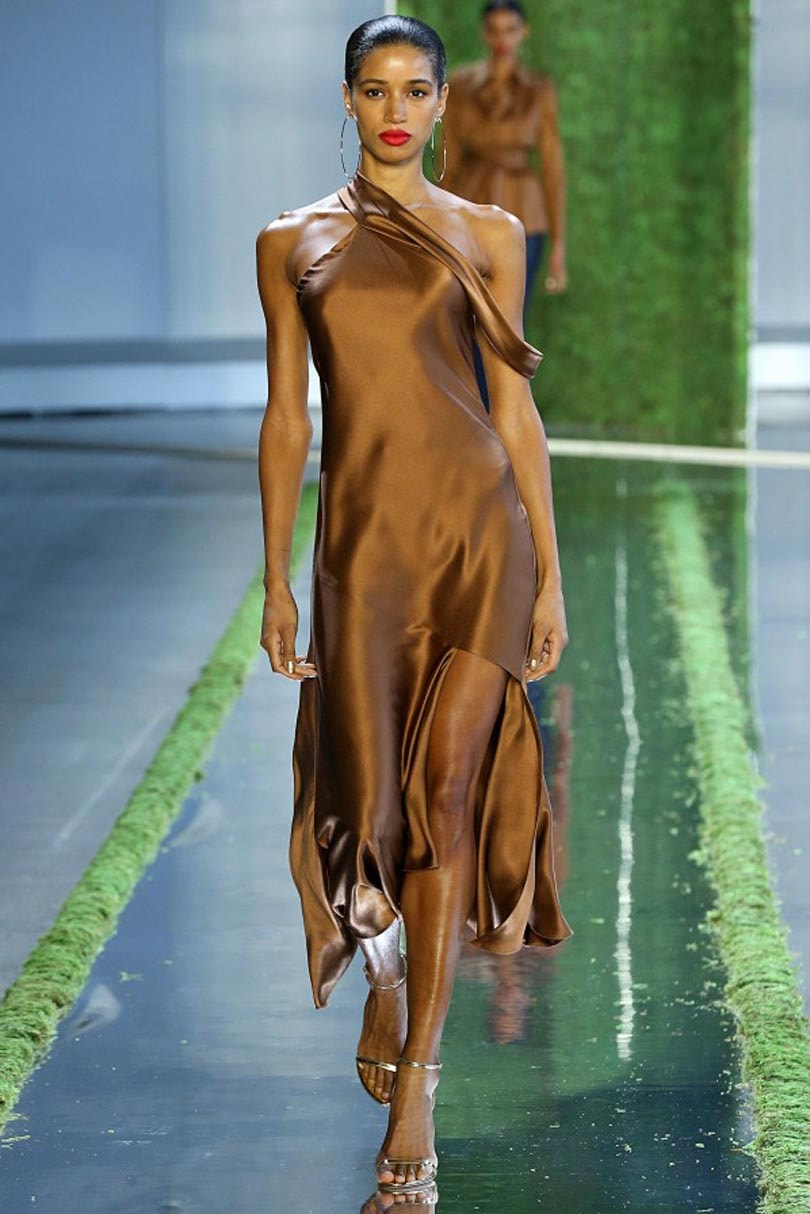 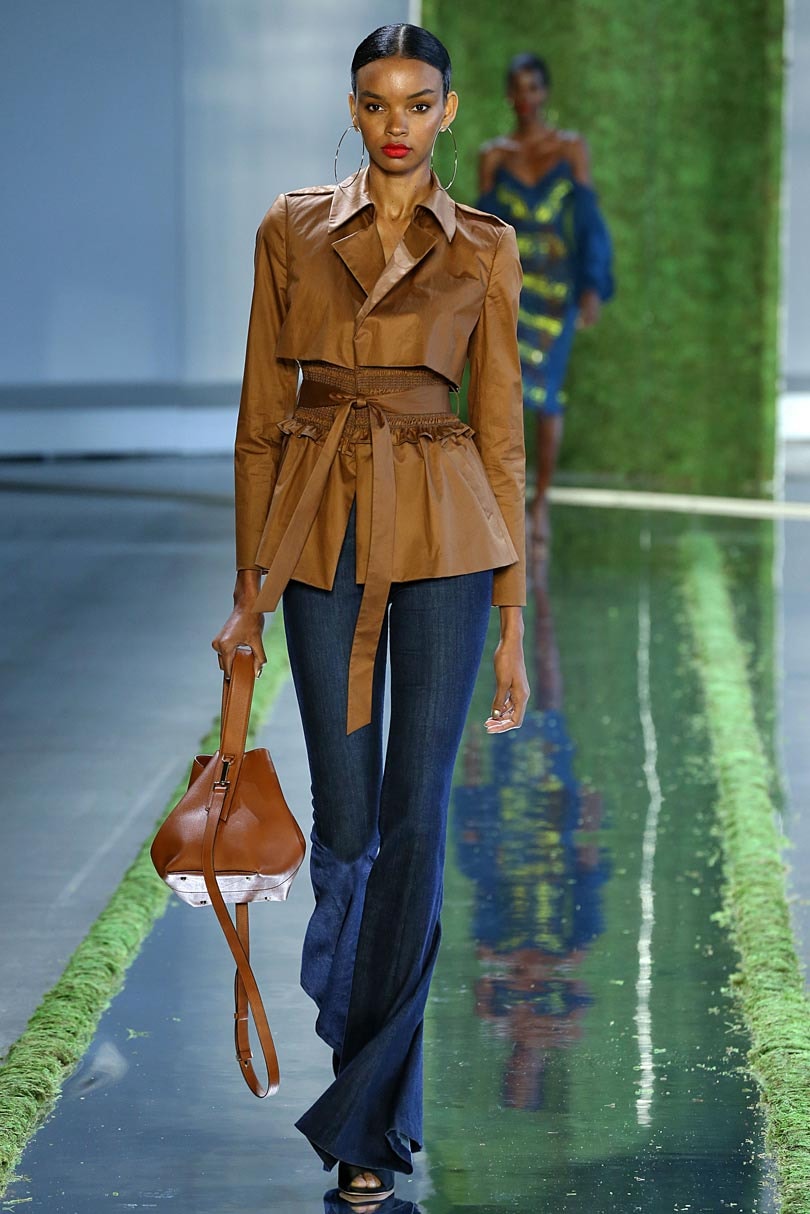 This is the second shade of yellow on the list. According to Pantone, this golden yellow feeds our desire for comfort. It appeared in Proenza Schouler’s, Mansur Gavriel and Sies Marjan’s collections. The latter used the color in three outfits, accentuating the golden effect with shimmering fabrics. 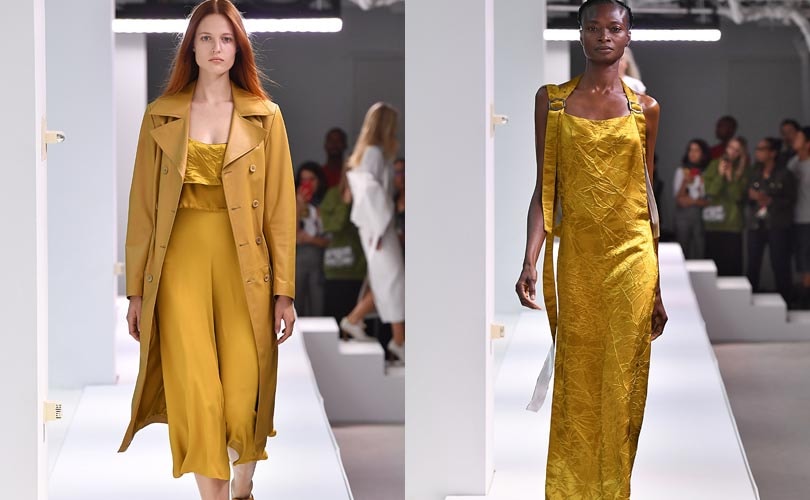 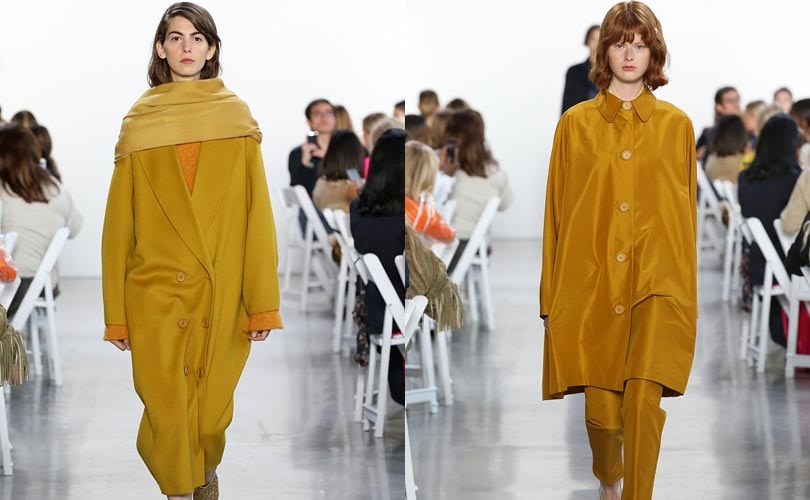 “Terrarium Moss makes us think of foliage and nature”, said Pantone. We spotted this dark shade of green in a coat by Mansur Gavriel. 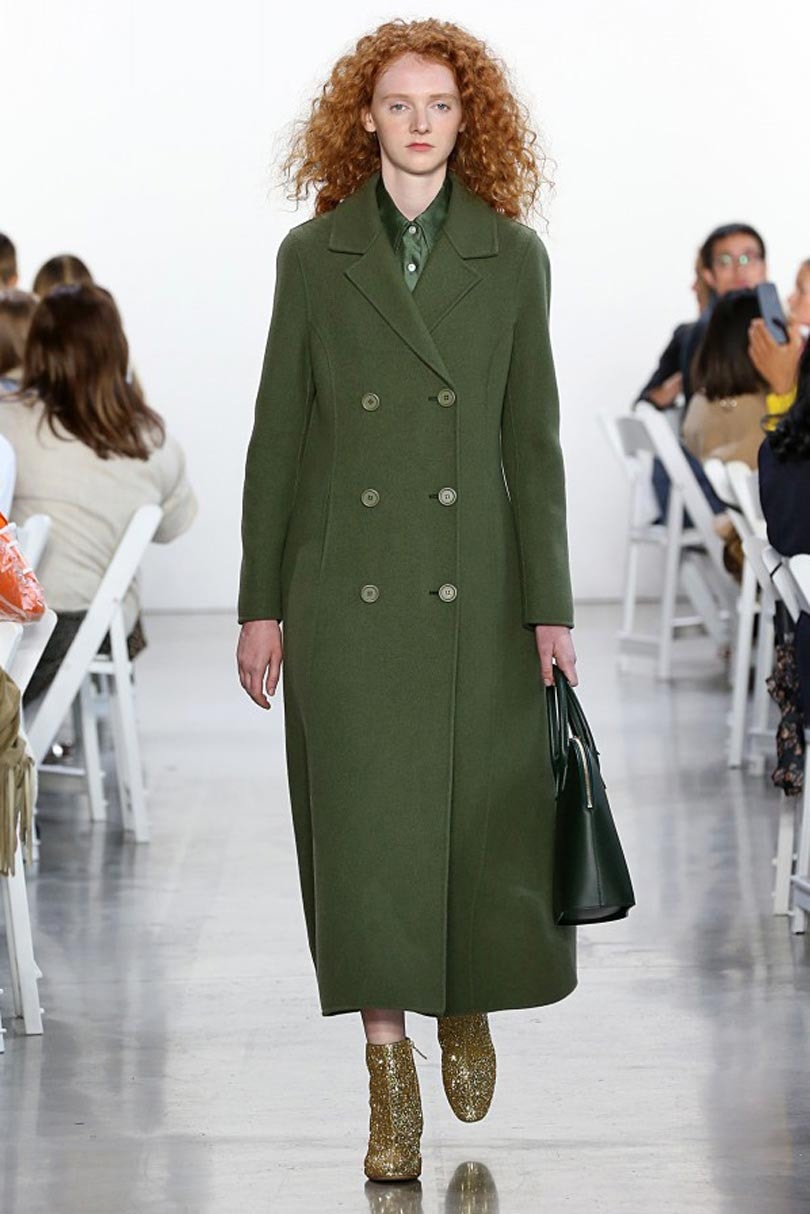 There seems to be no end to the pink’s popularity. The color has been trending for a while, and it will remain popular throughout Summer/Spring 2019. The second shade of pink on Pantone’s list has a hint of lavender. Rodarte and Priscavera used the color in feminine evening dresses, but Sweet Lilac also came in a streetwear look in LRS’s fashion show. Sies Marjan also featured a blazer in this color, styled with a fuchsia snake print shirt. Also seen on Gabriella Hearst’s catwalk. 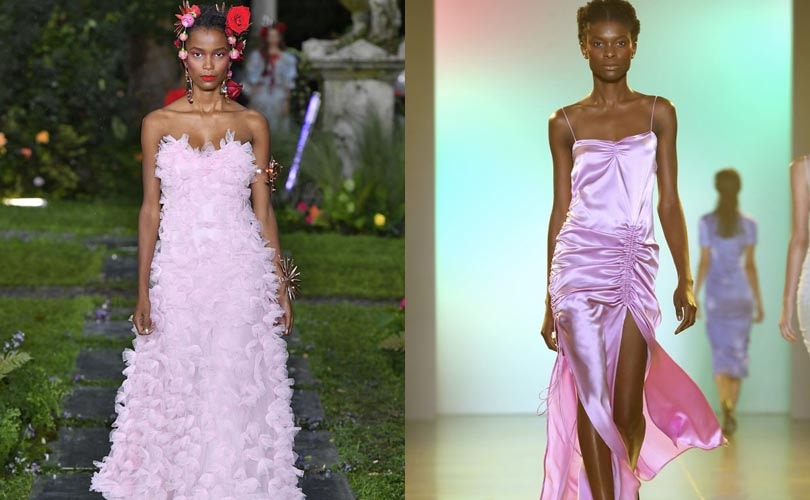 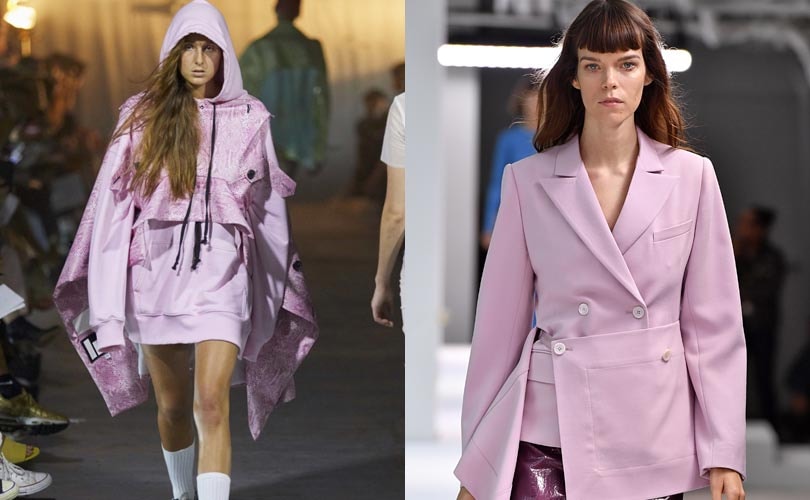 This article was originally published in Dutch at FashionUnited the Netherlands. Translated and edited by Marjorie van Elven.