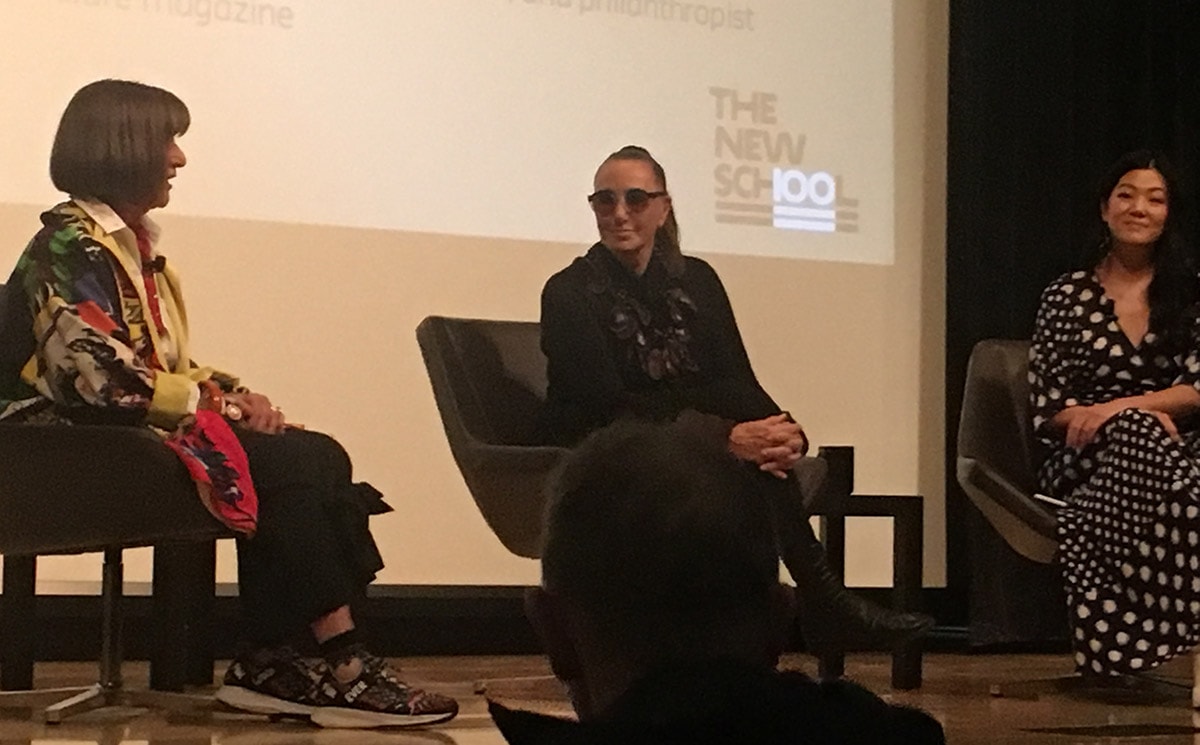 The Disappointing Devolution of Donna Karan

Donna Karan failed her draping class at Parsons, didn’t get accepted at WWD for an illustration job, says the last thing she wanted to do was fashion, and was fired from her first job at Anne Klein. With all these early knockbacks, the fact that she proceeded to become one of the foremost female designers in the global fashion industry of the late twentieth century is the stuff of legend. A decade ago she was motivated to start Urban Zen, which works with the artisanal people of Haiti among other countries, because she realized she no longer just wanted to be a designer but to be “dressing and addressing the issues at hand.”

The legend of her has lured an auditorium full of young people to Parsons, the occasion is the school’s centennial celebrations, and the context is a panel discussion entitled “The Power of Reinvention.” The recipe for a triumphant hour’s experience.

As the panel wraps up, Karan leads the room in a meditation. Then the event is opened up to questions from the audience.

A student steps to the microphone and begins by respectfully thanking Karan for being there, then mentions that she had been disappointed with Karan’s comments during the Harvey Weinstein scandal, before asking how the designer has evolved or grown from that experience. Karan, a friend of Weinstein’s, had said in an interview that women were essentially “asking for it” by how they dressed and presented themselves, comments which received immediate and widespread backlash. 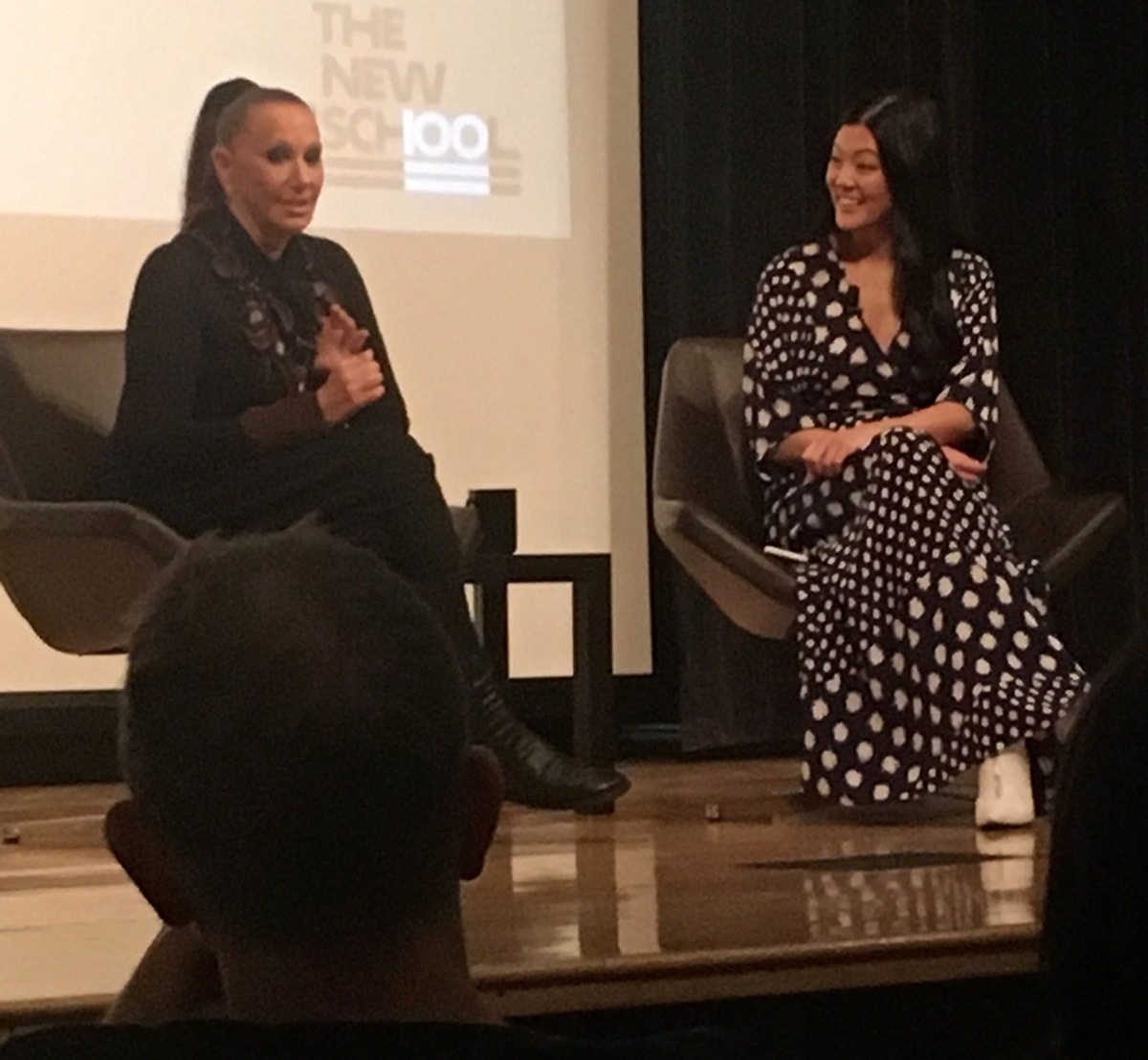 It is unsurprising to sense a few audience members around me tense up and sit forward in their seats. I’m not worried. Karan completed a massive mea culpa tour in 2017 that took her all the way to Good Morning America. She blamed her ill-considered comments on the fact that she’d just stepped off a 17-hour flight and was completely exhausted and unprepared. Then of course, there followed two years of intense global reckoning around male predators, combined with women rising up, and a general condemnation of any type of victim blaming, shaming, or other such nonsense, none of which will have escaped Karan.

“The media can distort what you say so that it is not what you say… or what was meant to be said,” she begins, before repeating previous assertions, “Anyone who knows me knows that I am obsessive about women, and their sensuality, and their bodies. It was almost too funny, and I’m also a grandmother, I’m also a designer, I love women, and I hope to be of help to women…No man, no man, do you hear me, no man, no-no man has any right whatsoever to do anything, and that was said very very clearly.”

But with one addendum, it all evaporates.

In a tone of some bravado, she says, “Now I could get in a lot of trouble for this, because I usually do,” which prompts the gentleman next to me, who had arrived with his teenage daughter, to cross his legs and raise his hand to cover his mouth, almost as if to convey to Karan that she should consider doing the same. But no, she goes on to say, “I think we as people have to say, are we asking for it? You really know when you get dressed, what do you want to show?”

At this point someone near me exhales the word, Jesus. Karan makes a vague point about the content we post on Instagram, before saying, “There are constrictions––when I was at school, your skirt had to be so long, you had to cover yourself respectfully, there’s nothing wrong with that. And that’s all I was saying. Sometimes today because of communication, and what we’re showing, what are we teaching our young people?”

On Good Morning America, Karan had emphatically described these very same sentiments, uttered almost word for word, as ”so wrong, and not who I am,” reinforced them with, “I’ve never done this before and I will never, ever do it again.”

So how do you solve a problem like Donna? No shiny model of reinvention she is instead a repeat offender defiantly staring down our cancel culture, daring the MeToo movement to come for her again. But she is also a woman who has been given a prominent platform to influence the minds of impressionable young creatives, of impressionable young women. The irony escapes her that in a fashion school setting to be advocating for the policing of self-expression so as not to inflame the uncontrollable urges of society’s prowling dysfunctional men seems like something from Emily Post’s day. If she had only directed her concern to parents, even the future ones in the audience, urging them, as a mother, as a grandmother, to raise upstanding respectful boys to men it would have been a winning turnaround. But you can’t teach an old Donna new tricks.

Parsons, The New School, with its acclaimed reputation in evidence across a weeklong centennial program teeming with notable alumni, thought leaders and pioneering figures of every creative industry, has been avant garde on societal change too. Me Too founder, Tarana Burke, participated in one of the events earlier in the week. Karan’s involvement with the school includes supporting the creation of its MFA Fashion Design & Society program and connecting students with craftspeople in Haiti through her Urban Zen D.O.T. initiative.

A comment she made earlier in the panel when reflecting on her younger self sticks with me: “I was like this cool young kid on the block. I was like talking one-to-one. Now I dress all the old women.”

I look into the face of the student who had asked the question one-to-one, woman to woman, as she returns to her seat and I read the disappointment in her features. I want to correct Karan, tell her that she might not be the cool kid on the block anymore but she could try harder to resonate and empathize with the new cool kids on the block. They showed up in their droves to hear what she had to say, but it turns out they can find those tired old opinions from much less exalted sources.