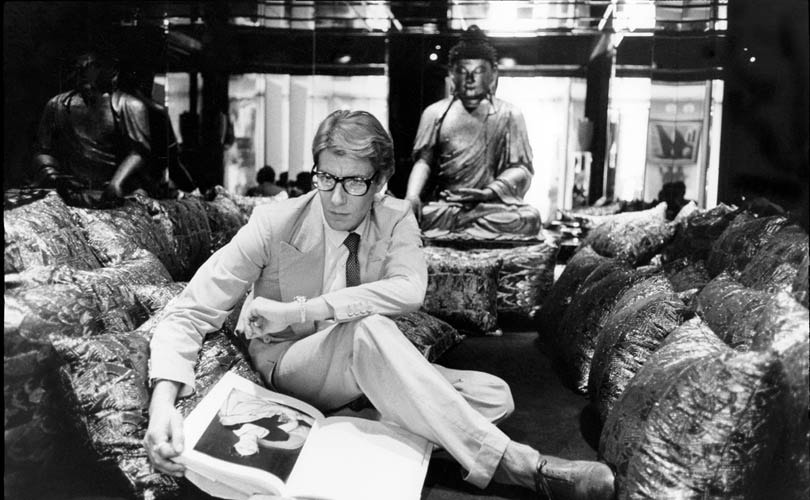 The dreamed Asia of Yves Saint Laurent: when imagination and reality become one

"I approach all countries through dreams," said Yves Saint Laurent. Asia and other distant lands have exerted on him - and on other European artists - an immense fascination in local customs, folklore and exoticism that is clearly reflected in his collections.

The Yves Saint Laurent Museum in Paris has just opened the doors of its first temporary exhibition since its opening in October 2017. "Yves Saint Laurent: Dreams of the Orient”, is open from October 2, 2018 to January 27, 2019, and brings together some fifty haute couture dresses inspired by India, China and Japan. For the first time, these pieces from the museum's collection are presented alongside ancient Asian artifacts loaned by the National Museum of Asian Arts, as well as private collectors, to offer authentic context to the collection’s historical influences.

"In his collections, Yves Saint Laurent delivers a very personal vision of Asia based on an in-depth knowledge of its history, culture and arts," explains Aurélie Samuel, the curator of the exhibition.

Through traditional Indian, Chinese and Japanese costumes inspired primarily from his rich collection of books, Yves Saint Laurent offers a vision of both literary and imaginary Asia to give life to his haute couture creations. "From his first collections, he reinterprets the sumptuous coats of Indian sovereigns. Then, Imperial China inspires the 1977 Autumn-Winter collection, for which he offers a theatrical representation of the country. That same year, the designer highlights these same Asian influences with his perfume “Opium”, which arouses a wind of scandal that has become famous worldwide. Fascinated by Japan, and in particular by the Kabuki theater, he then goes on to revisit the kimono," said a statement from the museum. 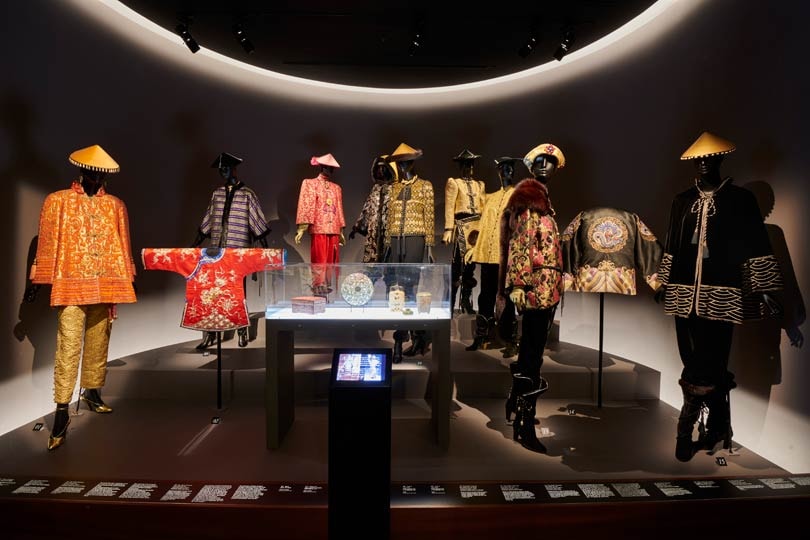 India remains one of the major sources of inspiration in the work of this couturier, a country whose culture and history he learnt mostly through his expansive collection of books. From his first 1962 Spring-Summer collection, he reinterprets the clothes of the imperial wardrobe in a personal and feminized vision of the traditional Indian coat. For his latest collection in 2002, he displays an array of draped dresses that draw on the fundamentals of the sari, the traditional dress of South India. 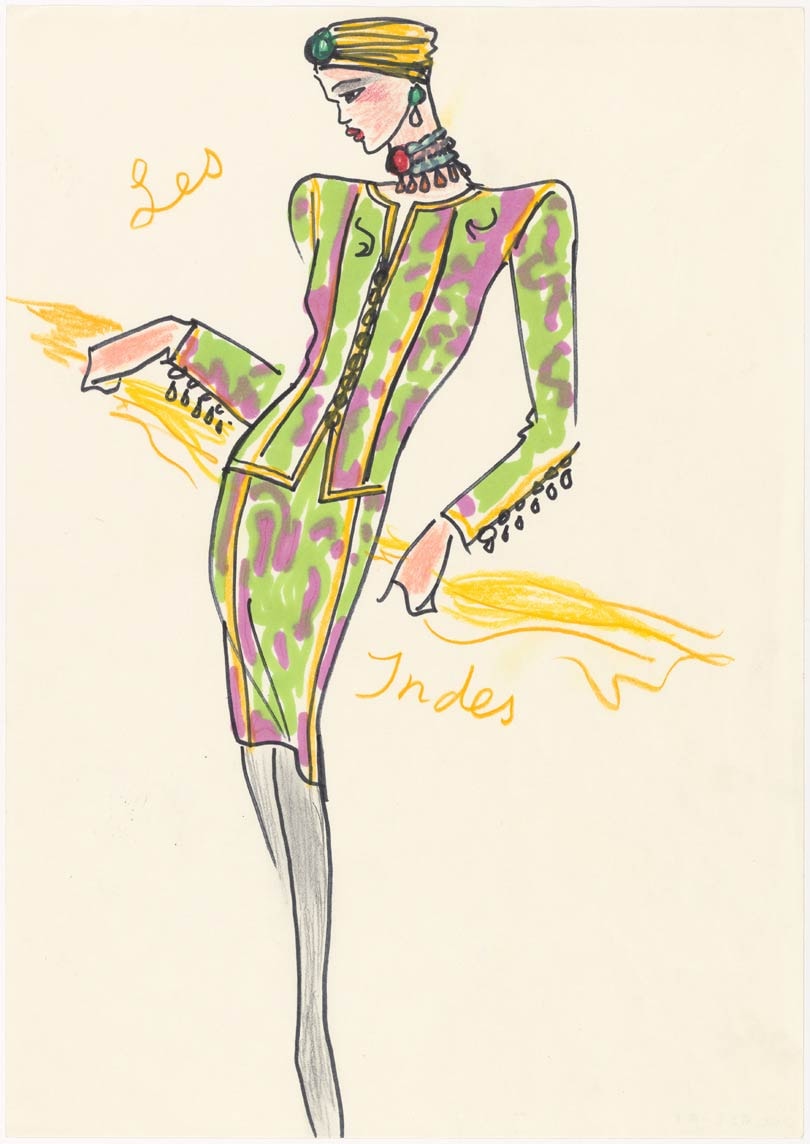 In North India, Yves Saint Laurent finds a mixture of elegance and magic which inspires his revisiting of the sumptuous coats of the sovereigns of the region. He develops a taste for precious silk brocade gold, embossed metal embroidery and sophisticated costumes embellished with jewelry, influenced primarily by costumes of the Mughal court, the dynasty that ruled India from the 16th-19th century. The designer also reinterprets these costumes, for example by taking the boteh - a floral palm pattern, emblematic of the royal power - and using it as an ornament of turbans (sarpech). The Hindu saris is also reimagined - the finest weaved muslin whose subtle transparency drapes delicately over the body, suggesting its outline without revealing it.

Within the exhibition, Yves Saint Laurent's 18th and 19th century outfits are presented in dialogue with contextual artifacts, such as a silver equestrian statuette, a model of the grand palace doors of Rajasthan, and original sketches that are presented next to miniature Indian sculptures. 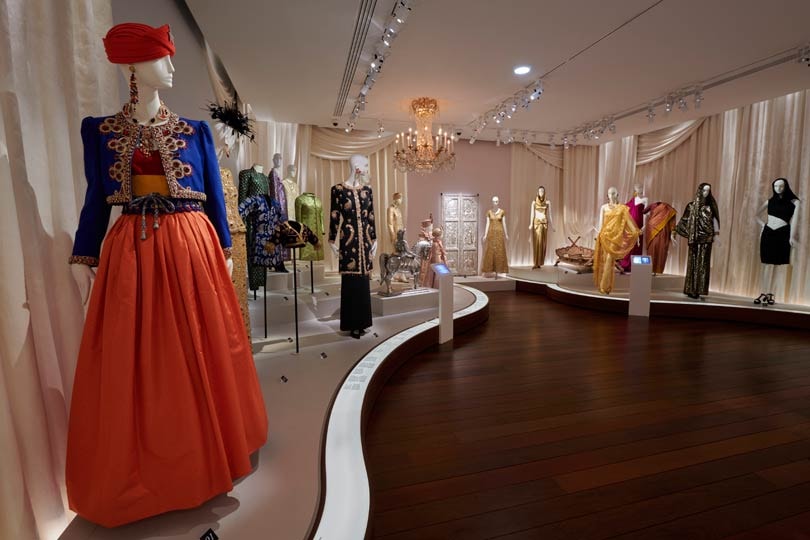 China as he had imagined…

It only took illustrated historical books to spark Saint Laurent’s creativity: "I do not feel any need to go there. I’ve dreamed so much ... " he confided at the time. With the exception of his 1985 exhibition in Beijing, Yves Saint Laurent did not travel to China. It is therefore mainly through his vast collection of books, films and the Chinese art that he owned with Pierre Bergé, that he draws inspiration for his work. 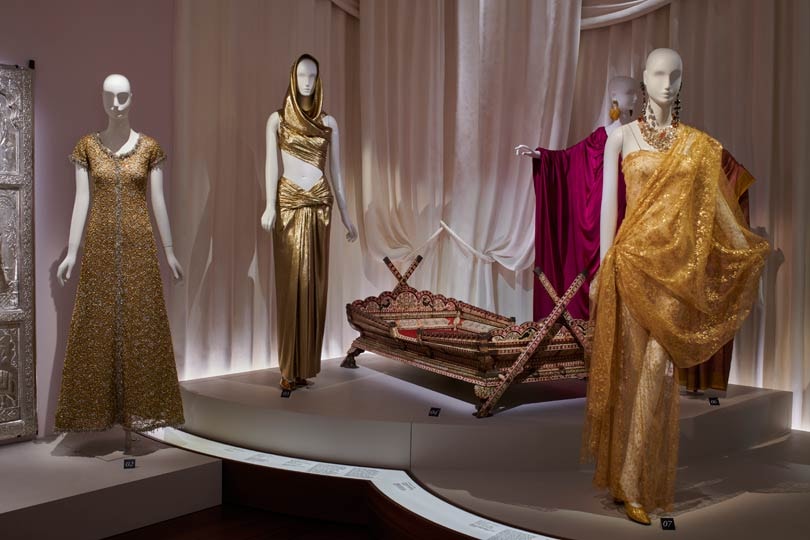 China inspires in Yves Saint Laurent an appreciation of loosely fitting clothes, a characteristic that was indicative of the social class of its wearer. While this loose form draws from the traditional outfit worn by women of the Han ethnic group (the majority of mainland China), Yves Saint Laurent keeps only the cut, the volume, and the wide sleeves of the design in his work. The "Chinese" Yves Saint Laurent seems to comply with the tradition of Peking Opera, aiming not to restore an authentic and historic garment but to produce an aesthetic effect, highlighting the movements of actors.

The smoke from my shredded brain resurges all the dynasties, their fury, their arrogance, their nobility, their greatness. I finally manage to penetrate the secret of the imperial state from which I liberate my aesthetic ghosts, my queens, my divas, my whirlwinds, my crêpe de Chine, my Coromandel lacquer, my artificial lakes, my hanging gardens.

In his Chinese-inspired creations, Yves Saint Laurent often uses floral designs that explicitly refer to the Far East. His 1970 Autumn-Winter collection evokes through its floral decoration a personal vision of the iconographic repertoire of the informal bianfu dresses (leisurewear) characterized by brightly coloured, free and varied floral patterns. The general shapes of the garment reflect both Asia and the world of the steppes through the use of the fuzzy tunic, long blouse and T-sleeves. The collar, with its closure on the side, evokes the Dragon dresses of the Manchu dynasty (1644 - 1912.)

If I chose Opium as the name for this perfume, it is because I hoped intensely that it could - through all its incandescent powers - release the divine fluids, the magnetic waves, the heart-warming and the charming seduction that gives birth to mad love, love at first sight, fatal ecstasy when a man and a woman look at each other for the first time.

In October 1977, Yves Saint Laurent organised a launch of his new Opium fragrance in Paris. As a cultured esthete, he was very much involved in the creation of the perfume, drawing, noting and validating every step of the manufacturing process, from the bottle to the pressing kit. The museum keeps dozens of drawings and documents that show the process of the perfume’s design, the most of which have never been presented to the public. A short film prepared especially for the exhibition also shows the stages of the perfume’s creation. 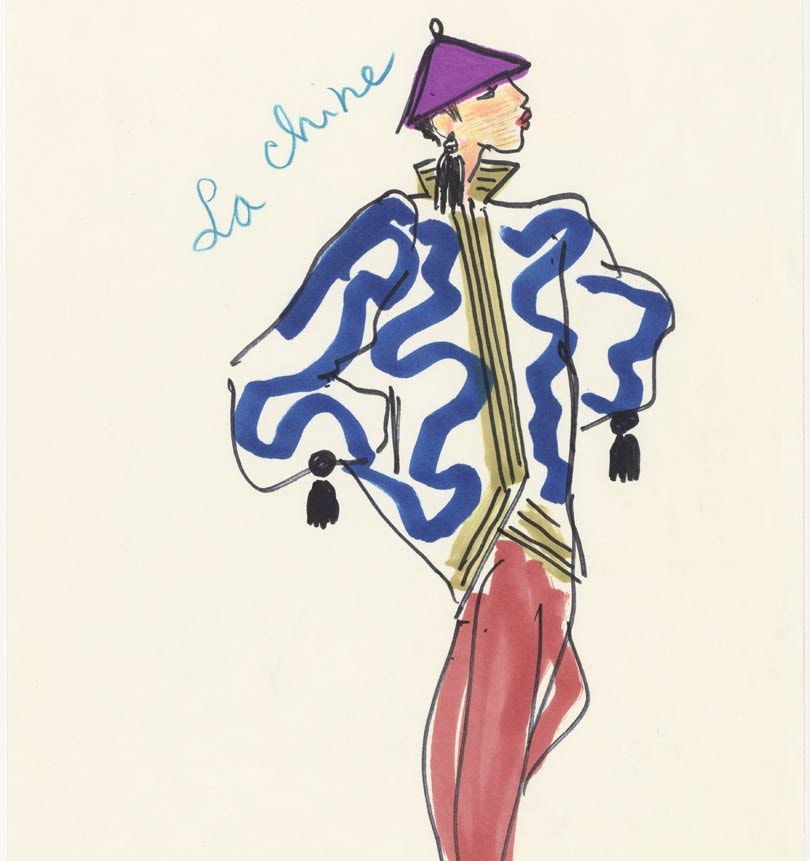 In the exhibition, different versions of the famous bottle imagined with Pierre Dinand are presented alongside real Japanese inrô from the Edo period and the Meiji era (17th - 18th century.) The advertising campaign is transgressive and impactful: Helmut Newton's photography with Jerry Hall and the provocative slogan of the MAFIA agency "Opium, for those who devote themselves to Yves Saint Laurent" is as enticing as it is scandalous.

Opium did not arrive in America until September 1978 with a spectacular launch party organized on a ship named the Peking in the port of New York. The American Coalition Against Opium and Drug Abuse then launched a campaign against Opium, alongside the Chinese-American associations who saw a diplomatic provocation in the perfume’s name. To this day the fragrance remains one of the greatest successes in the history of perfume.

Japan: bringing together the past and the present

In his early life, Yves Saint Laurent visited Japan and quickly became fascinated - like Monet and Van Gogh before him - by the country’s beautiful mix of the old and the new.

Fascinated by the Edo period (1600-1868) - during which art gradually emerged from imperial power, and through the Kabuki theater - Yves Saint Laurent revisits the traditional kimono. T-shaped, he offers a version that retains the fluidity of its lines, accompanying the silhouette in its movement instead of constraining it. While reflecting the ancestral quintessence of Japan and its delicate refinement, the interpretation of the kimono by Yves Saint Laurent remains nonetheless an original creation. 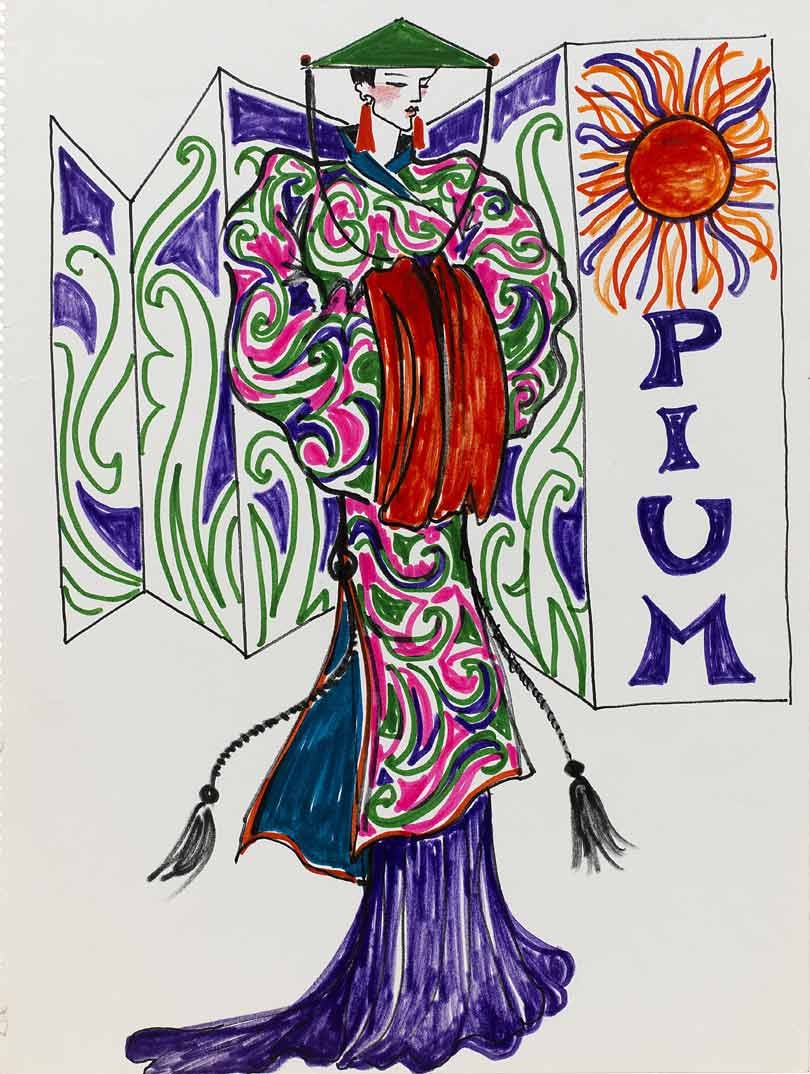 "For Yves Saint Laurent, Japan is more than an inspiration, it is a model that is the starting point of a creation that pays tribute to the grace of courtesans wandering the streets of Gion, a reserved area of Kyoto that Yves Saint Laurent and Pierre Bergé paced. Pierre Bergé declared: "We were passionate about Kyoto and everything that happened in Gion. I went to Japan a lot. It has become my favourite country. " Within the exhibition, the dialogue between Yves Saint Laurent's creations and traditional Japanese outfits, such as a superb uchikake-style kabuki costume, or several prints representing courtesans, testifies to this passion. "

This article was originally written for FashionUnited.FR by Anne-Sophie Castro. Translated and edited by Huw Hughes.