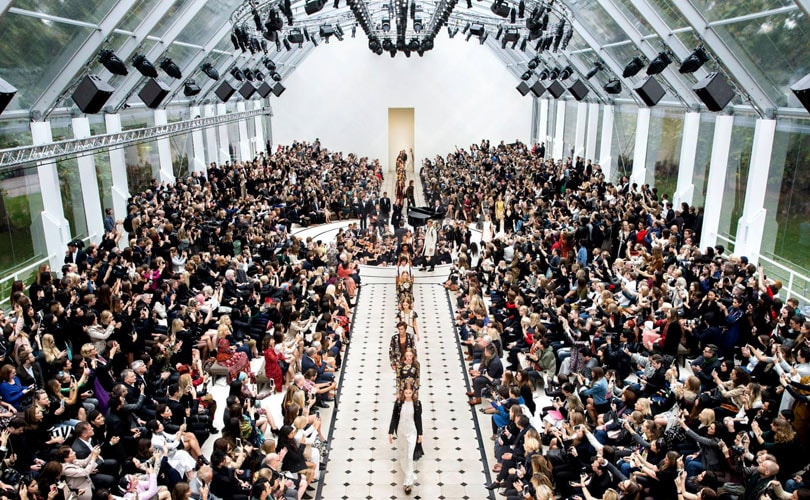 The Fashion Week shows everyone was talking about

After a month filled with fashion shows, launches and parties where designers showed what the rest of the world will be wearing next spring and summer, a certain sense of calmness has returned to the streets of New York, London, Milan and Paris. With all the photographers, designers and models having packed up and returned home, FashionUnited decided to look back one last time and recount the highlights of the past month.

Farewell at Balenciaga and Gucci

The one subject that always proves to be a popular source for conversation, is the topic of farewell. One farewell that was on everyone´s lips was that of Alexander Wang, Balenciaga´s creative director. The debut collection which Wang presented in 2013 was seen as very promising, and the established fashion journalist Vanessa Friedman even credited Wang for being the designer who may possibly bring change to the brand. However, Wang never made it to that point, as he announced his departure from the brand in July. For his final collection for Balenciaga, the designer combined ruffles, satin and transparent fabrics, which resulted in 35 looks that can only be described as romantic and feminine. Wang showcased close-fitting as well as loose white and ivory dresses, blouses, jackets and trousers. Business of Fashion (BoF) editor Tim Blanks called the collection a love letter to Paris, and it seems as if the bar is already set high for Wang´s successor, Demna Gvasalia. 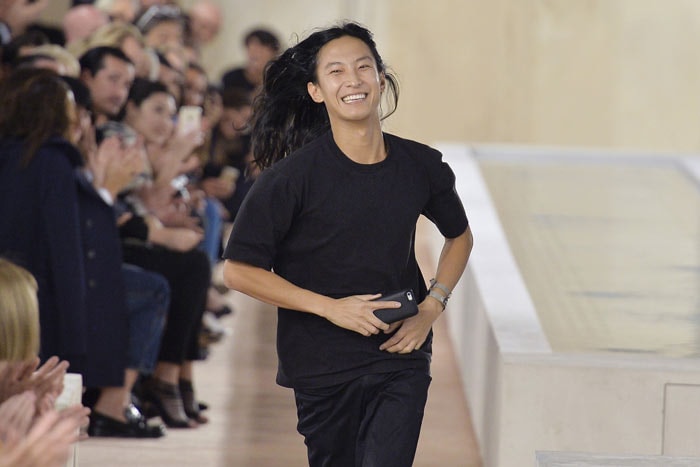 Goodbyes were exchanged in Milan as well, however in this case it did not concern a designer. Gucci permanently parted from the dusty image that had haunted the company in the past few years. Alessandro Michele, who was appointed Frida Giannini´s succesor in January, presented his first collection for the fashion house in February 2015. Fashion critic Suzy Menkes praised Michele for his ´enthusiasm and intelligence´, and Women´s Wear Daily (WWD) and Style.com also cautiously expressed their appreciation of the designer´s decision to move away from Gucci´s traditional style. Compared with the straight silhouettes that were seen in spring/summer 2015, Michele´s dashing skirts and richly decorated tops were a refreshing sight to behold. The critics let go of their initial wariness, after his latest geeky and colourful collection proved that Gucci is indeed undergoing a drastic change. Michele found his inspiration in the Renaissance and the ´70s, which resulted in what Blanks called “a gorgeous chaos of old and young, old and new, done and unfinished, shiny and dull, prim and louche, magical and terrifying”. In addition to have the press on his side, Michele is also supported by the sales which illustrate that Gucci has changed for the better.

A new start at DKNY and Hill & Friends

In addition to the departing designers, debut designers were assured of sufficient attention. In New York, the fashion crowd were able to look forward to the first collection by Dao-Yi Chow en Maxwell Osborne for DKNY. Chow and Osborne, who also own the fashion label Private School, showed dresses, oversized blazers and skirts resembling aprons. Amongst all pieces in white, grey and black the only fully coloured item was a blue transparent slipdress. “Mr. Osborne and Mr. Chow had an almost unprecedented chance to reinvent accessible New York dressing,” stated Friedman. She perceived their design decision to remain true to their signature style with an occasional wink to their predecessor as a shame. Yet, she acknowledges the fact that not everyone might feel the same about this: “There’s often a sense, when new designers arrive at a much-loved brand, that the first season should be a judicious shuffling in; that change should come softly, so as not to alienate or offend those who still carry a torch for the time before.” Her comment perfectly summarized the thought that Chow and Osborne shared between them. “'We're still trying to find ourselves, but we know that it's a long journey and we left ourselves enough leverage to have some fun in the future,” told the designers in an interview with the Daily Mail. 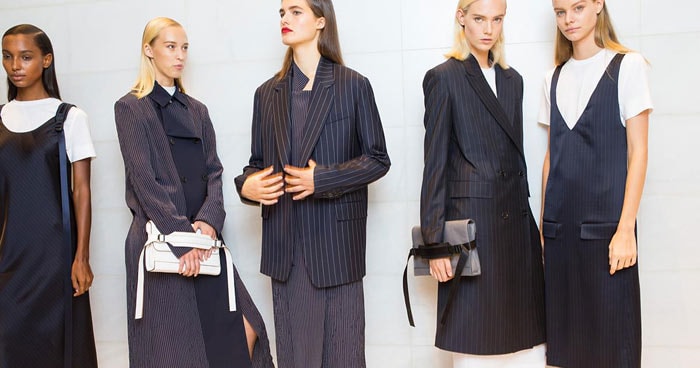 On the other side of the Atlantic Ocean, Hill & Friends presented their first collection to a group of 50 journalists. The debut label was founded by Emma Hill and Gergia Fendley, who met during their time at Mulberry. Hill quit her job as Mulberry´s creative director in 2013, while Fendley left her position as brand director in the same year. “There wasn’t ever an obvious plan, but we wanted to have creative control, be able to set the strategy and culture and not have that distorted,” said Fendley in an interview with Creative Review. Both she and Hill believe that above all, fashion should be fun, which was clearly reflected in their presentation. The ballroom of the Claridge´s Hotel was the backdrop for a generous breakfast, after which models dressed as bellboys entered the catwalk carrying Hill & Friends´ bags. The collection consisted of six styles such as handbags, weekend bags and evening bags which contained a leopard pattern or were coloured neon pink, navy or black. Although the collection evoked memories of Hill´s former work for Mulberry for some, there is one significant difference between the two brands: their prices. The average price of a Mulberry handbag is approximately 900 pounds, whereas 70 percent of Hill & Friends´ bags cost less than 1000 pounds.

The usage of social media by Burberry and Dolce & Gabbana

“Forget the catwalk: these days, it´s social media that decides what you wear,” wrote The Guardian after London Fashion Week. Christopher Bailey, CEO and head designer at Burberry understands the appeal of social media very well. The luxury brand was the first label to use Snapchat for an exclusive preview of its collection. The short videos and photos that were visible for 24 hours, showed clothes and accessories of the brand´s latest SS16. “The ephemeral nature of the platform heightens that sense of special occasion,” explained a spokesman for Burberry. In addition to being used before the show, Snapchat also played a role during the show when the app displayed crowdsourced live images. Burberry´s spokesman describes the app as high-reach and high-engagement. The first time that Burberry joined forces with Snapchat was during Fashion Week in February of this year. However, at the time the brand only made images of the collection public after the show. 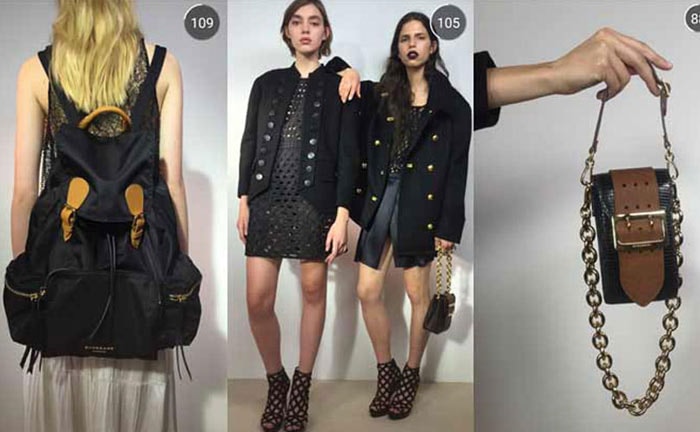 Social media was also an important factor for bringing Milan´s Fashion Week closer to the public. Domenico Dolce and Stefano Gabbana sent their models down the catwalk with a smartphone in hand. The models took selfies on the catwalk as well as behind the scenes that were immediately showcased on large screens next to the catwalk. Also, each photo was posted on Instagram with #DGselfie or #Italiaislove in order to give fans a behind-the-scenes look at Dolce & Gabbana´s ode to Italy. The show generated a significant buzz, even though the brand was not the first nor the last to make use of the popularity of the modern-day self-portrait. According to Forbes, what makes this case exceptional is the fact that it all took place in Milan. Fashion shows in Italy´s fashion capital are well-known for being orchestrated with military precision, which leaves little space for innovation. Accordingly, the selfie parade that the Italian designer duo set up is a move worth mentioning.

The Adelina bag: entirely hand-made by an expert artisan, its ‘50s soul is highlighted by the solid and austere structure, soft gusset sides and by the iconic Dolce&Gabbana locket. The inside is entirely lined in nappa leather. #ITALIAISLOVE #DGselfie #DGss16

Models with a story at FTL Moda and Rick Owens

The models who presented the newest collections are intricately connected to fashion shows. In addition to showing their creations, designers sometimes like to use their models to tell a story that extends beyond the show. The FTL Moda show in New York advocated more diversity on the catwalk. Last year, the FTL Moda show featured models with a disability, and this year the organisation had teamed up with the Global Disability Inclusion foundation as well as the Cristopher & Dana Reeve foundation that raises money for people suffering from paralysis. One of the models that made her Fashion Week debut this year was the Australian Madeline Stuart, who has Down syndrome. Stuart showed a design by Hendrik Vermeulen. Also, Shaholly Ayers, who is missing one of her underarms, and Leslie Irby, who is in a wheelchair, were part of the FTL Moda show. The New York Times mentioned the show second in an overview of Fashion Week´s highlights. 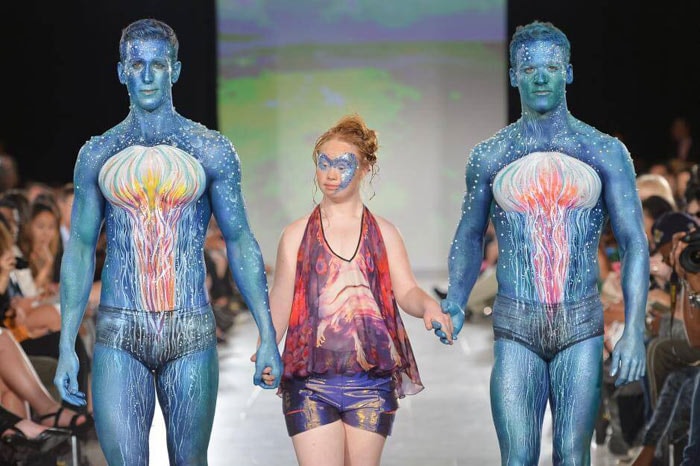 Another designer who used Fashion Week to convey another message, was Rick Owens. The designer, whose shows have caused a stir in the past, strapped his models together for his show in Paris. Whereas the first three models to enter the catwalk were only wearing clothes, the fourth model that walked was carrying one of her colleagues on her back. Upside down, backwards or with legs spread wide: all positions that can possibly be imagined were used in this show. Owen said that this show was his way to visualise the bonds that exist between women. Vogue described it as a dedication to the power of women, and BoF journalist Blanks complimented Owens with his ability to appeal to everyone's emotions. “He is a master in telling untold stories, which is why we all love him,” said Angus Munro, casting director for the show, in an interview with Vogue.