The most fashionable movies of 2020 awards season

As we leave holiday party season behind us, we look ahead to red carpet season, and pick the movies that are dazzling us for inspirational costume design. The following are sure to be award contenders, but may also inspire trends for 2020.

Nostalgia for a particular era tends to happen around its twenty year anniversary and ushering in the aughts revival in a parade of Juicy Couture velours track suits, Uggs, boot cut low-rise jeans and statement hoop earrings is Hustlers starring Jennifer Lopez as con artist stripper, Ramona. “Climb into my fur,” she instructs Destiny, a fellow stripper in need of a hug, reminding us of the decadent days before the financial collapse and before the fashion industry’s widespread disavowal of animal fur. But as Lopez's wardrobe swings from one extreme to another––at one point she wears little more than a piece of string––it is perhaps a nod to the eclectic layering we’ll be adopting in response to our current climate crisis.

In what must have been a costume designer’s dream job, rhinestones, feathers, skin, sequins and wings, all collide in this platform-stomping, boa-throwing showstopper as Taron Egerton plays Elton John. Julian Day who was also behind the costumes for the Freddie Mercury biopic Bohemian Rhapsody brings 70s excess by the stageful having rummaged through Elton John’s West London warehouse which houses the shopaholic singer’s costume archive. One scene in which John sits on a plastic chair at an Alcoholics Anonymous meeting dressed as Satan, complete with curling horns and vivid red wings is a particularly riveting visual. No wonder the singer is such an inspiration for fashion’s maximalist-in-chief, Gucci’s Alessandro Michele. 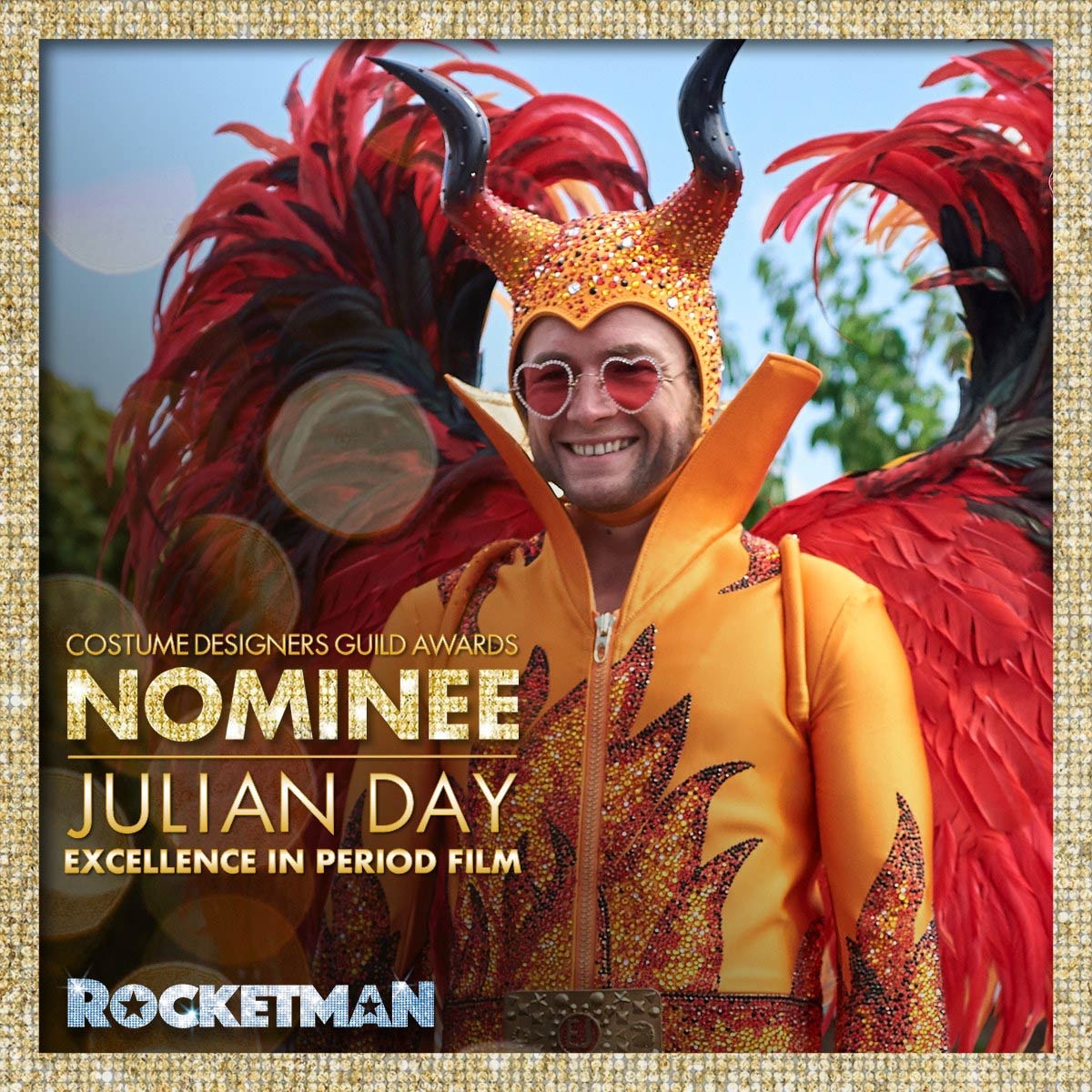 Mobster tailoring is due to make a comeback after the three-hour epic, The Irishman, brings the smoothest of criminals to our screens. It’s a timely reminder from Oscar-winning costume designer Sandy Powell, who worked from vintage pieces and photographs, that a well-cut suit, a pin-stripe, a stealthy pleat-front pant can if nothing else intimidate a new decade into submission. Hardware suggestive of concealed weapons such as gold rings and tie jewelry, pins and clips seal the deal.

Once Upon a Time in Hollywood

The ultimate Californian girl, glamorous but doomed Sharon Tate, played by Margot Robbie, could have been plucked right from the Miu Miu runway, but the men in this Tarantino movie were right on trend too arriving on our screens to coincide with the fiftieth anniversary of the summer of love. Veteran costume designer Arianne Phillips crafted looks reflecting the machismo of the era with open-necked Hawaiian shirts and slim-hipped denim accessorized with Stuntmen’s Association belt buckle and cowboy boots for Brad Pitt’s Cliff, and leather jackets, moccasins and chunky medallions embellished with the letter R for Di Caprio’s Rick.

Also researching the 60s––the 1860s, that is––Greta Gerwig shared the photographs of British artist Julia Margaret Cameron with costume designer Jacqueline Durran, who also won an Oscar for 2012’s Anna Karenina, to communicate the lived-in, somewhat contemporary effect she wanted for her adaptation of Little Women, reflecting her indie sensibilities while also remaining accurate to the Victorian period. Each March sister was given a color––Jo’s costumes are threaded with red to reflect her tempestuous nature while her androgyny is deftly captured with waistcoats and boyish headwear. Durran referenced an 1867 Tissot painting depicting a group of artistic men for Timothée Chalamet’s wardrobe in his role as Laurie. 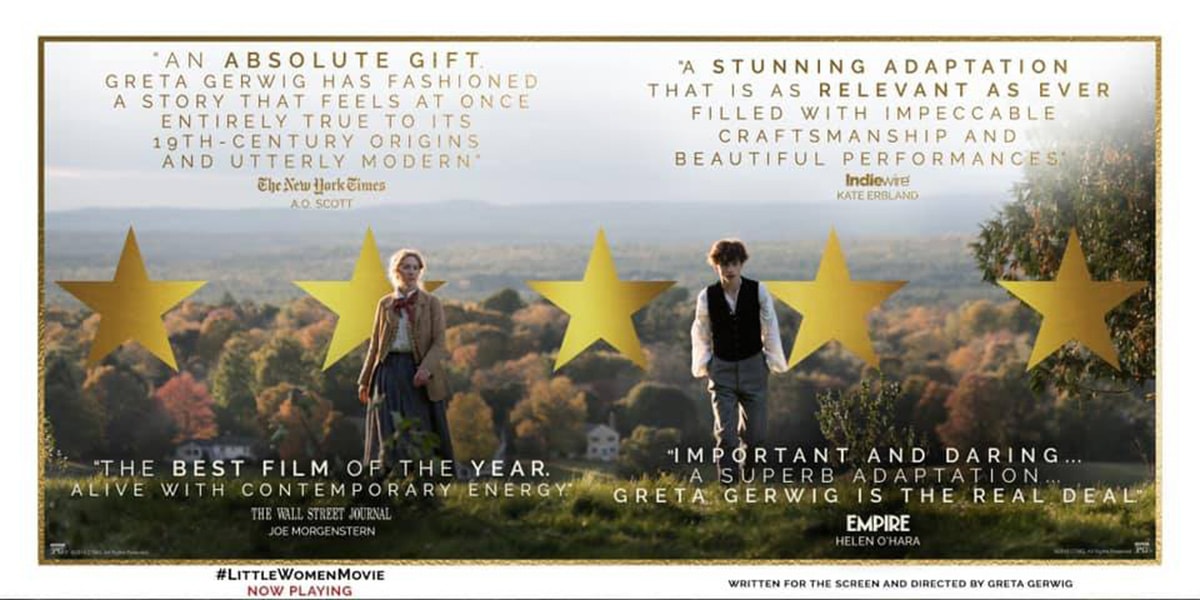 Director of Queen & Slim, Melina Matsoukas made her name directing music videos for style icons such as Beyoncé and Rihanna so the bar was set high for her debut feature, a Bonnie and Clyde tale of lovers on the lam. Pulling from the visuals of black activism and hip-hop, costume designer Shiona Turini reached out to Dapper Dan who provided tracksuits for the character of Uncle Earl, and Aurora James from Brother Vellies is behind Queen’s eye-catching snakeskin boots. Add to the mix latex dresses, full-length furs and Sean John staples, and running from the law couldn’t be more glamorous.

And a word on the worst fashion in film example for this awards season: Bombshell sees Charlize Theron, Nicole Kidman, and Margot Robbie play reporters at pre-Me Too Fox News network where the female talent, forbidden to wear trousers, were obliged to array themselves in skintight jewel-toned body-con dresses with high heels, to accentuate their physical assets and diminish their professional ones. Costume designer Colleen Atwood did an excellent job of capturing the predatory male gaze associated with the network under the command of since-ousted lech, Roger Ailes, but let’s hope this trend isn’t making a comeback any time soon.