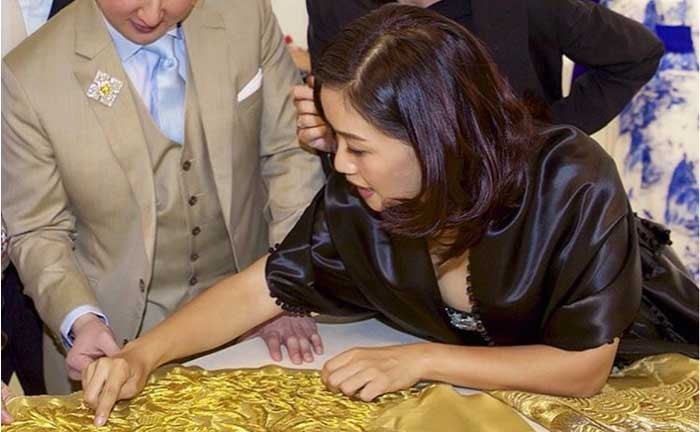 The rise of Guo Pei

New York - It is no secret that the world of fashion design is very competitive. Everyone dreams of becoming the next big designer, but only a special chosen few get to make it. However, a certain Chinese fashion designer has begun to evolve into a household name.

Guo Pei spent several year as a designer, before she started her own fashion brand in 1997. Nearly two decades later, she was catapulted to household name status when musician Rihanna wore a cape by her to the 2015 Met Gala. Rihanna, who was one of the most googled guests of the Met Gala, had everyone wondering who is Guo Pei.

Guo has long been dressing Chinese celebrities, so, amongst her homeland, the designer (who only speaks Manadarin) was a fashion star in more than her own right. It took a trailing yellow gown to adorn the back of an international celebrity to put Guo on the map, further solidifying her place in fashion stardom. If dressing celebrities like Rihanna isn't enough of a gold star on the designer's resume, she is also the first born-and-raised Asian designer to be invited to the Chambre Synicale de la Haute Couture, the design organization which includes members like Jean Paul Gaultier, Karl Lagerfeld, and Adeline Andre.

What are the origins of the gifted and talented women though? 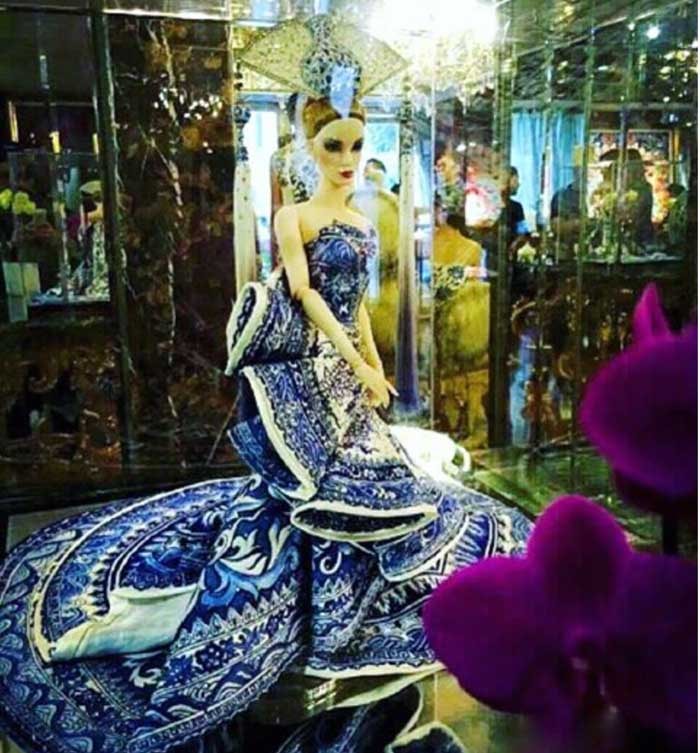 Guo was born in Beijing in 1967. Her father was a senior Chinese communist party official and her mother was a school teacher. She studied fashion design at the Beijing Second Light Industry School. Three years later, she would go on to become the chief designer at one of Beijing's first independently owned clothing companies in post-Cultural Revolution China.

The designer has two dreams in life according to a quote she gave at Guo Pei & Fashion: The Collection of the Kyoto Costume Institute: "To build a fashion museum, and to create a fashion library to inspire future generations." Her accomplishments and the consistent praise she receives for her collections have her set on the path to both of those dreams.

For a new luxury designer to find prominence in China is no easy feat. China's wealthy often favor already established luxury brands over newer ones. Those who can afford the luxury price tags that come with Guo's garments are those would usually prefer Chanel, Dior, Giorgio Armani, Prada, etc. 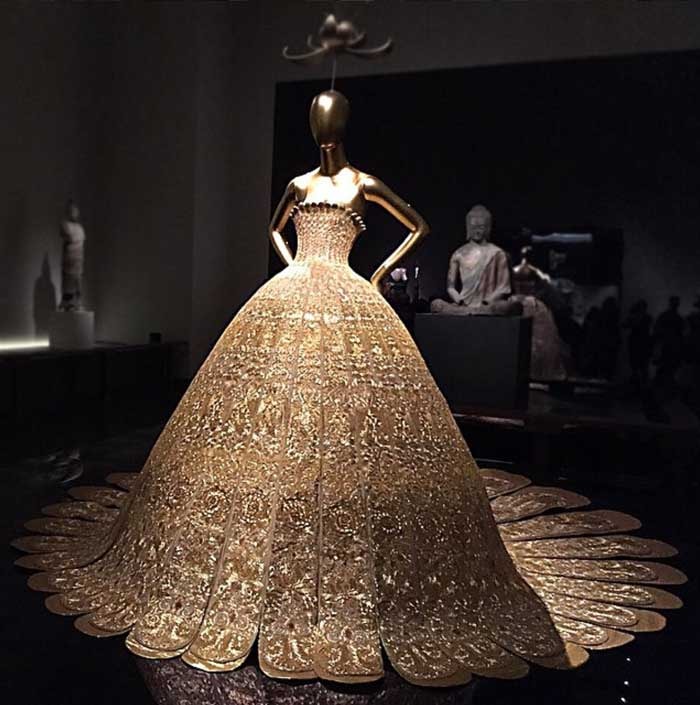 Guo has a secret to bringing in those types of customers though: appeal to their old school tastes. There are two aesthetics that work for her. On one hand, she is gifted at taking inspiration from classic high-fashion designs that would have graced the pages of Jessica Daves' Vogue or Carmel Snow's *Harper's Bazaa*r. On the other hand, she knows how to create fantasy, drawing inspiration from grand opera costumes and Renaissance art.

Arguably the most unique element to her work would be the Chinese embroidery. Although, dozens of couturiers from John Galliano to Jean Paul Gaultier have incorporated Chinese embroidery into their work, it's hard to compete with China's first homegrown couturier.

Let's not for even one second think that Guo became an overnight sensation by any means. That dress she created for Rihanna's Met Gala appearance took two years to construct. The amount of labor that goes into Guo's creations deserve respect alone, and the designer has more than earned her rise to stardom.

The yellow satin, fox-trimmed, embroidered, sixteen-foot-train cape she loaned Rihanna originally wasn't imagined for the celebrity to wear. Prior to the Met Gala, Guo had actually never heard of Rihanna, and she's traditionally reluctant to loan big things to celebrities. The decision to let the musician wear the cape paid off because it easily became the most internet viral dress of the night, and made Guo Pei the most googled name of any fashion designer for days to come. 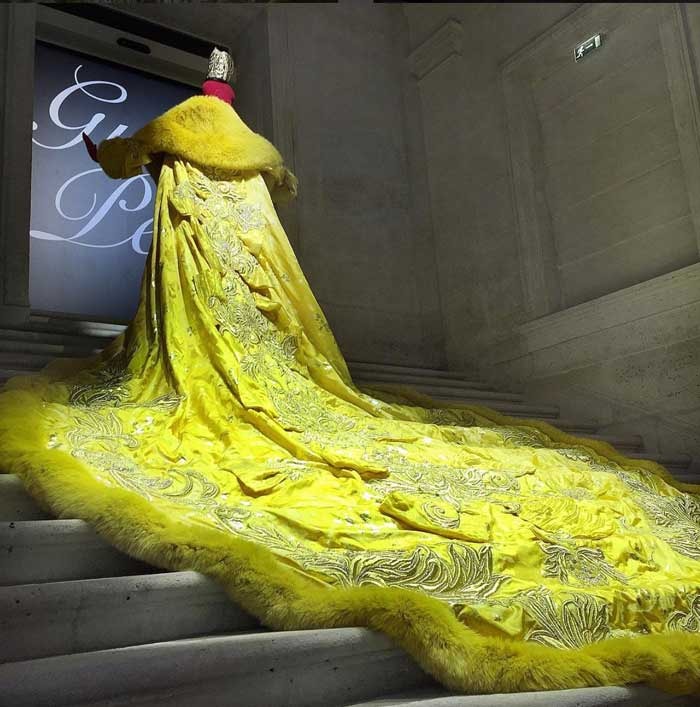 Guo, who was recently featured in "The First Monday in May," also had the honor of having several pieces of hers featured in The Met's "China Through the Looking Glass" exhibit last year. For those museum goers who were already familiar with the likes of Karl Lagerfeld, Roberto Cavalli, and Givenchy, they now had a new name on their lips: Guo Pei.

Dressing Rihanna and being featured at The Met's exhibit therefore gave the designer three stamps of approval. The first is the stamp of the celebrity elite, after all, one big name celebrity wearing your designs can transform a business. The second is the stamp of The Met's curator Andrew Bolton, which says your designs are truly art. The third and final stamp is that of Vogue's Anna Wintour herself, a stamp that a million designers would kill for.

In a world of ready-to-wear reigning supreme, Guo's ability of find fame as almost exclusively a couturier is also no small feat. Her couture is handmade to order, and she also does what she refers to as demi-couture, which is hand-finished, but less elaborate than her couture offerings. What she is best known for, however, is wedding and evening wear of opulence so fine it would have made European nobility of centuries past envious. It is not unheard of for one of her gowns to go for six figures.

For Guo, she is not here for the nouveau riche or those aspiring for a youthful aesthetic. Her muse is 84-year-old model Carmen Dell'Orefice.

In terms of her clients, Guo can list off oligarchs, entrepreneurs, and the wives and daughters of China's top party officials, though she rarely gives anyone by specific name.

In an era where design houses can pop up left and right and then disappear the next day, Guo has earned her staying power. She's built up a loyal clientele following, has created an aesthetic and quality unique to her, and has more than earned her place in the industry. Without question, the woman is on her way to becoming a design icon, and her rise has only just begun.