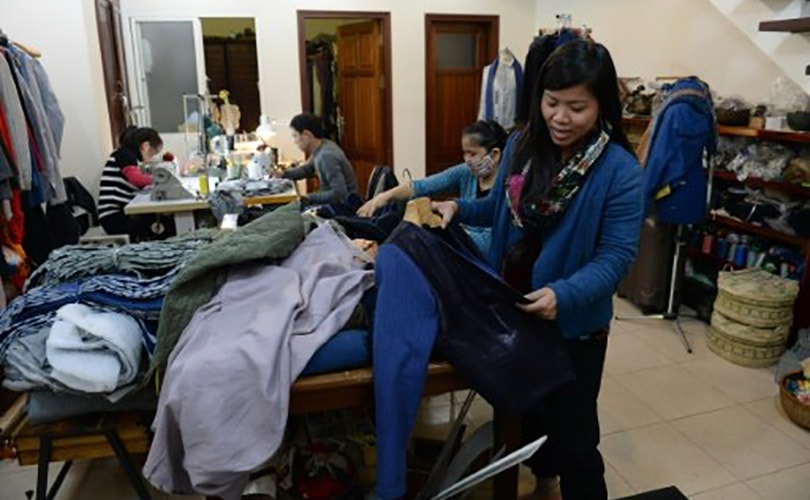 Long a bastion for cheap, fast-fashion manufacturing, a new crop of designers are trying to transform the Made in Vietnam label and save the country's rich ethnic heritage in the process.

In the remote hills of Cao Bang, some 300 kilometres north of the capital Hanoi, Vietnamese designer Thao Vu is gleefully dropping swaths of hand-spun cotton into a large bucket of fermented indigo leaves. Her label, Kilomet 109, is at the forefront of Vietnam's new 'ethical fashion' movement -- an approach to design that seeks to maximise benefit to communities while minimising environmental harm.

The 38-year-old designer has been tapping into this growing global trend by working with some of Vietnam's 54 ethnic minority groups, each of which have their own unique textiles and traditional clothing designs. "I learn the techniques from them," Thao told AFP, explaining how she has drawn inspiration from Nung women in Phuc Sec village, who use natural dyes and weave on hand looms.

Returning to the roots

She then adds "a more modern, contemporary touch" to style garments that will appeal to clients in fashion capitals like Berlin and New York. But bridging this divide isn't always easy. Thao said the Nung women were shocked when she suggested experimenting with colours outside of their traditional dark indigo shade.

"They looked at me like 'what'? And they said: 'if you lived here you wouldn't find a husband,'" Thao told AFP, explaining that crafting the perfect dark indigo fabric dye is a prerequisite for marriage in their community. Thao persevered, and now uses traditional roots and leaves to colour organic silk, cotton, and hemp, which are also manufactured from scratch, in a range of hues from deep indigo to pale grey, and earthy oranges and browns.

Vietnam has in recent decades become a hub for massive garment factories that churn out reams of cheap clothes as quickly as possible for fashion giants like Zara, Mango and H&M. The multi-billion dollar sector has helped drive impressive economic growth but also drawn criticism for weak environmental and labour rights regulations. Yet products made by the country's traditional fabric spinners are inherently eco friendly -- made with natural dyes and textiles, not harsh chemicals or synthetic fibres. And there is not a sweat shop in sight.

"At first, I just wanted to keep the traditional techniques alive... but then I realised we need to be concerned about the environmental, ethical side (of fashion) now or it will be too late," said Thao. The designer has already attracted accolades, winning international design awards and selling her wares to high-fashion buyers. The local women who work with her, such as Luong Thi Kim, 40, say they too have benefited from the colloboration.

"Before I weaved for personal use but now ... our weaving products can go to other countries. I want to earn money to raise my children," Kim told AFP. Over in central Hue -- the former imperial capital of Vietnam -- another label is also helping local artisans market their skills to the global fashion industry.

Fashion4Freedom founder LanVy Nguyen, a former refugee who fled post-war Vietnam in a wooden boat and forged a successful Wall Street career, returned to Vietnam in 1998 and decided to use her venture capital acumen to save ancient artisanal techniques.

"We knew these people had generations of skill, we just had to unlock it so the market could appreciate it as we did," LanVy told AFP. Fashion4Freedom stepped in to help, teaching traditional woodworkers, who carve ornate pillars in pagodas or local houses, to learn how to make platform shoes that cost some 600 US dollars a pair. Do Quang Thanh, a carpenter, said the idea of making shoes initially struck him as "strange" but he is glad he gave it a try. "In the past I carved traditional wooden houses now I carve shoes in a modern style -- I love the job," he said.

Jimmy Lepore Hagen, vice president of strategy for high-end US clothing line Nanette Lapore, said he's considering a collaboration with Fashion4Freedom, which also sells luxury jewelry and apparel. "Taking a brand's idea (and) design aesthetic, and matching that with people who have an incredible culture and history and are trying to build something new and exciting for US market is a real opportunity," he added.

The head of Vietnam's handicraft export association, Le Ba Ngoc, sees linking Vietnamese artisans with overseas fashion designers as a chance to embrace more sophisticated designs -- what he says is the weak link in the handicraft chain. "It's the major factor holding back foreign and domestic sales," he told AFP.

Ensuring consistent quality is also a problem. But his organisation is trying to work with ethnic groups to find ways to modernise their techniques -- such as developing an Indigo powder dye -- while still remaining true to their style. (AFP)