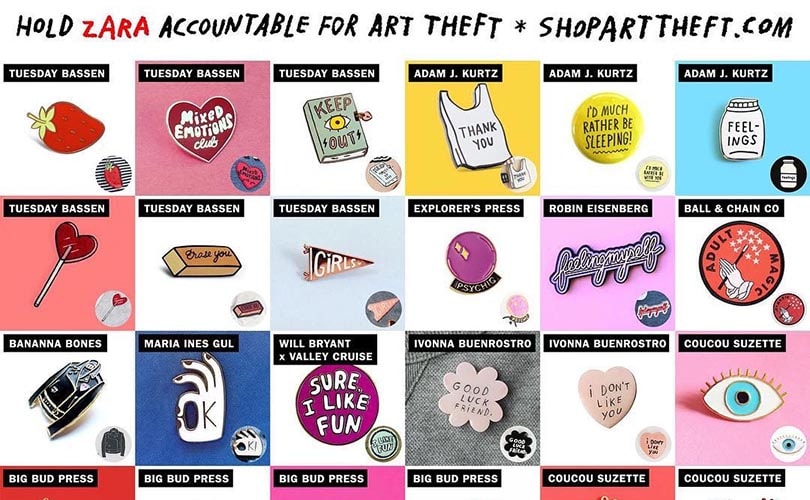 When Los Angeles-based illustrator and artist Tuesday Bassen last week accused high street fashion chain Zara of copying her work, the similarities were embarrassingly obvious when she posted the images on her Instagram.

Known for her quirky colourful illustrations, Zara took no qualms in copying Bassen's work and sell it commercially on a range of printed pins and badges, as the like-for-like images show. Oddly Zara's design team paid little regard to make any substantial alterations to the designs to make them appear, shall we say, more 'inspired by' rather than blatant plagiarism.

I've been pretty quiet about this, until now. Over the past year, @zara has been copying my artwork (thanks to all that have tipped me off--it's been a lot of you). I had my lawyer contact Zara and they literally said I have no base because I'm an indie artist and they're a major corporation and that not enough people even know about me for it to matter. I plan to further press charges, but even to have a lawyer get this LETTER has cost me $2k so far. 〰 It sucks and it's super disheartening to have to spend basically all of my money, just to defend what is legally mine. EDIT: Some of you are asking how you can help. Repost and tag them, on Twitter, on Insta, on Facebook. I don't want to have to burden any of you with the financial strain that comes with lawsuits.

Unsurprisingly, Zara shrugged its shoulders when Bassen appointed a lawyer to contact the world's most profitable high street company. Bassen stated: “I had my lawyer contact Zara, and they literally said I have no (case) because I'm an indie artist and they’re a major corporation. Not enough people even know about me for it to matter.”

Zara is a multinational conglomerate, few can challenge a corporation of this size, let alone win a legal battle to defend one's intellectual property. If large companies are allowed creative license to copy artists as they deem fit, what does that say about ethics in fashion?

When luxury brands are spending millions of dollars on fighting counterfeiters, there is an entirely different set of codes when they find inspiration from artists, subcultures, and even other designers. When an artist's main asset is their creativity, their visual voice and their unique work is their intellectual property. It is a different story if that artist is making references to the work of someone else.

There are plenty of illustrators and digital artists who are inspired by luxury brands, using their campaign images and logos from brands such as Louis Vuitton, Versace and Prada and turning them into new works of art and communicating a message. Artist Bess NYC re-appropriates advertisements from the most iconic of luxury brands by collaging them with photographs of anything from Teletubbies to S&M, but he does so with the full support of luxury brands, as he is deemed cool and has a massive social media following.

A pattern emerged, with Zara copying over 40 artists

When Bassen dug a little deeper, other indie artists who's work has been copied by either Zara or one of its portfolio brands, a clear pattern emerged. Artist Adam J. Kurtz, for example, recognised his work in products plagiarized by Zara, however he took it one step further and launched a website titled 'ShopArtTheft' which catalogues the designs of over 40 artists who's work has been either copied or inspired by the Spanish retail giant.

I kept quiet when @zara stole my pin art last month bc artists always lose these battles. I don't have money for a lawyer??? so I bought a set of the knockoff pins — which also included fakes of @gpez & @bigbudpress — and didn't post about it. . but today I am so grateful to my friend @tuesdaybassen who, after actually doing what you're "supposed" to do (trying to work with a lawyer to fight her own infringement case with ZARA), decided enough was enough and shared their totally offensive reply. their lawyers boiled it down to "we are big and you are small" in the face of very clear theft of like 5 of her products! she shared her experience and it's been blowing up online all day. you can read about it on buzzfeed, jezebel, daily mail, cosmopolitan, fader, mtv and many other outlets. . in the meantime, I compiled a page of all the other artists whose copyrights have been infringed upon for other current products. at first I didn't realize but it's over a dozen different independent artists, the type that post their work on instagram with hashtag #pingame and all that. ZARA has stolen from all of us at the same time, which is how you know. once is an error. a dozen times is routine. how did nobody question the decision? how did none of the trend forecasters at the world's largest apparel retailer (which includes several subsidiary companies) think "hmm idk looks familiar!" . I don't really know what will happen. personally? I kinda feel like "well ok I have a new book coming out and like, I'm busy, lol bye!!!!" but many of the artists affected by this only make one or two pins or patches. some of these artists handpaint their products themselves (like @ivonnabuenrostro who I love so much). . we can support all the original artists by purchasing directly from them and I've created a handy shopping guide at bit.ly/shoparttheft

“We were all surprised to find that our creative work was suddenly all over Zara product,” Kurtz wrote in a statement on his website. “Our original art has been reproduced as pin and patch sets, embroidered decals and prints on apparel. Though some of the themes maybe be simple shapes or icons, Zara’s replications are near-identical, and the massive scale of this theft from a tight-knit creative scene implies a conscious choice by Zara, Bershka, Pull&Bear, Stradivarius and the parent company Inditex to not bother making significant modifications.”

Zara rejected artist's claims for not being 'significant'

Zara's response to Bassen's legal representative was clear: “We reject your claims here...the lack of distinctiveness of your client’s purported designs makes it very hard to see how a significant part of the population anywhere in the world would associate the signs with Tuesday Bassen.”

As High Snobiety noted, Tuesday Bassen doesn’t own the copyright to an image of a heart. But, once she creates a lollipop version with three white lines, and Zara copies it, she has a reason to be upset.