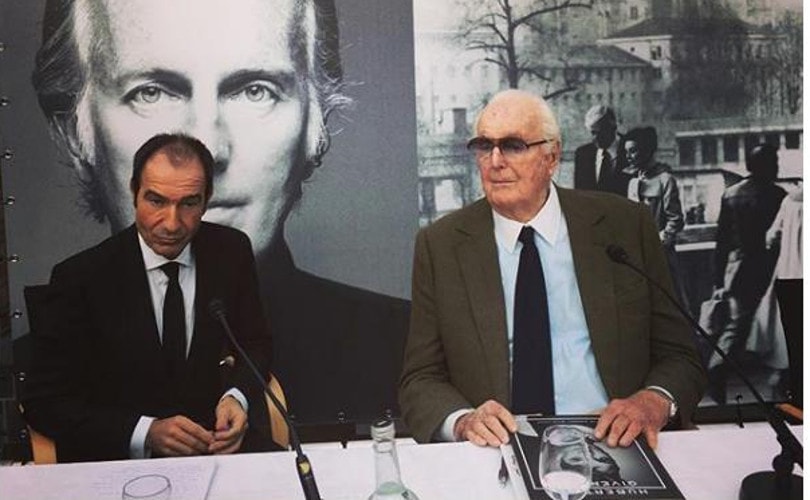 Hubert de Givenchy, the aristocratic French fashion designer famous for the "Little black dress" and styling Audrey Hepburn and Jackie Kennedy, has died aged 91, his partner said Monday. Givenchy set the template for ladylike chic in the 1950s and 1960s, dressing everyone from Princess Grace of Monaco to Jane Fonda. His longtime partner, the former haute couture designer Philippe Venet, announced his death through the Givenchy fashion house, saying he had died in his sleep on Saturday.

"It is with huge sadness that we inform you that Hubert Taffin de Givenchy has died," it said in a statement to AFP. With his perfect manners and old-school charm, the tall and handsome designer was the very acme of French elegance and refinement. But it was his 40-year friendship with his muse Hepburn, who he met on the set of the Billy Wilder's Oscar-winning comedy "Sabrina" in 1953, that helped make him a fashion legend. The narrow-collared suits and slim woollen dresses Givenchy designed for the gamine actress for "Funny Face" and "How to Steal a Million" made both of them style icons.

The black sheath dress Givenchy created for the opening scenes of the "Breakfast at Tiffany's" was perhaps the most famous "little black dress" of all time -- even if fellow Paris fashion legend Coco Chanel is credited with inventing the garment. "His are the only clothes in which I am myself. He is far more than a couturier, he is a creator of personality," Hepburn once said of him. "To dress a woman is to make her beautiful," Givenchy once said. "In haute couture, we are cosmetic surgeons, erasing imperfections and refining the silhouette... for isn't a couturier a magician of sorts, who creates illusion and perhaps beauty itself."

The House of Givenchy is sad to report the passing of its founder Hubert de Givenchy, a major personality of the world of French Haute Couture and a gentleman who symbolized Parisian chic and elegance for more than half a century. He will be greatly missed. pic.twitter.com/xapm0zSwDy

Former US first lady Jacqueline Kennedy adopted the Givenchy look for her White House years, sticking to a uniform of shift dresses, pillbox hats and low-heeled pumps. The red coat she wore on the campaign trail for the 1960 presidential election was a Givenchy copy. On a state visit to France the following year, Kennedy made a famously grand entrance in a Givenchy white silk faille dress at a state dinner at the Palace of Versailles, looking as regal as any European monarch's consort.

"Hubert de Givenchy was a symbol of Parisian elegance for more than half a century... who revolutionised fashion," his label said Monday. Its current British-born designer Clare Waight Keller said that Givenchy was "not only one of the most influential fashion figures of our time, whose legacy still influences modern day dressing, but he also was one of the chicest most charming men I have ever met. "The definition of a true gentleman that will stay with me forever," she added. Fashion mogul Bernard Arnault, head of the giant LVMH group which now owns Givenchy, led the tributes, saying that "he was one of the creators who put Paris at the summit of world fashion in the 1950s." It was Arnault, however, who is believed to have forced him to retire in October 1996 after buying his fashion house eight years earlier. He was replaced by John Galliano, who was soon to leave for Dior, handing over to fellow Brit Alexander McQueen. With typical discretion, Givenchy made no comment, only that he had not been consulted about the appointments.

Yet two decades on his restrained style still informs the way Britain's Queen Elizabeth II and older American and Chinese socialites dress. Givenchy's final couture show in July 1995 was an emotional moment, with his fellow couturiers Yves Saint Laurent, Paco Rabanne, Christian Lacroix and Valentino taking front-row seats in a packed salon in the opulent Grand Hotel at the Paris Opera. Givenchy took his bow on the catwalk in his atelier's smock, and with characteristic modesty brought on all his loyal "petites mains" seamstresses to share the applause. (AFP)