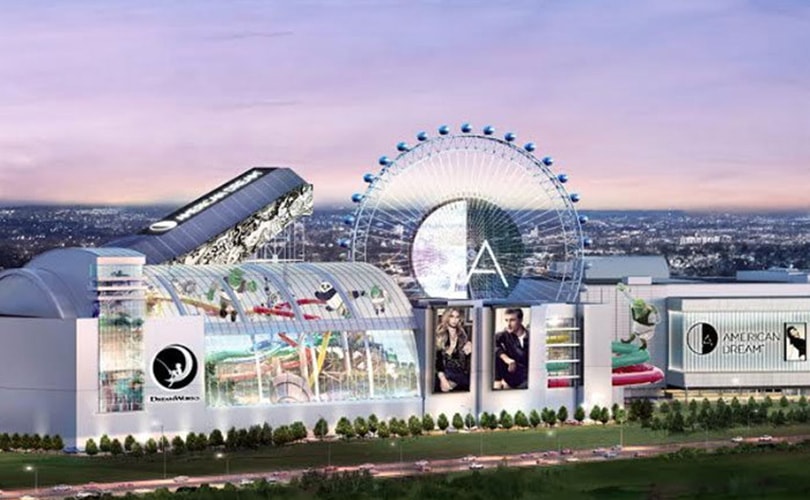 American Dream mall to open its doors in October

American Dream, the mega mall being built in Bergen County, New Jersey, has announced its opening date: Friday, October 25. Spanning over 3 million square meters, the mall will be located at the intersection of highways I-05, Route 3 and Route 120, which serve over 100 million vehicles annually. The space will offer a mix of retail, entertainment and dining experiences.

The retail section will include several luxury brands and department stores such as Barney’s, Hermès, Dolce & Gabbana, Saks Fifth Avenue, Moncler and Tiffany & Co. As for the entertainment options, they will include an indoor Nickelodeon theme park, a DreamWorks water park, an Angry Birds golf experience and the first indoor ski and snowboard park in North America. Last but not least, American Dream will feature over 100 dining and specialty food offerings, including 20 full-service restaurants.

“American Dream brings its guests an unrivaled destination for style and fun. It’s unique mix of entertainment (55 percent) and experiential retail (45 percent) will welcome and entertain guests, embracing everyone in a new retail and entertainment revolution, where everything is possible”, said Ken Downing, Chief Creative Officer for the mall’s developer, Triple Five Group, in a statement.

Will this new model make shopping malls sexy again? We’ll have to wait until October to see. American Dream is launching at a difficult time for shopping malls in the United States. A recent survey by real estate company Reis found that US malls are emptier than they have been since 2012. Visits to malls declined by 50 percent between 2010 and 2013, according to Cushman & Wakefield. The vacancy rate in regional and super-regional malls reached 8.6 percent in the second quarter of 2019, up from 8.4 percent in the first quarter.

The project took 16 years in the making. Originally named Xanadu and operated by Mills Corporation, the mall was scheduled to open its doors in 2007. However, the financial crisis stalled the construction, as Mills Corporation went bankrupt and so did Lehman Brothers. Triple Five Group, the company responsible for building the largest shopping mall in North America (the West Edmonton Mall in Canada) gained full control of the project in 2013. It is estimated the company has invested at least 1 billion in American Dream in the last five years.