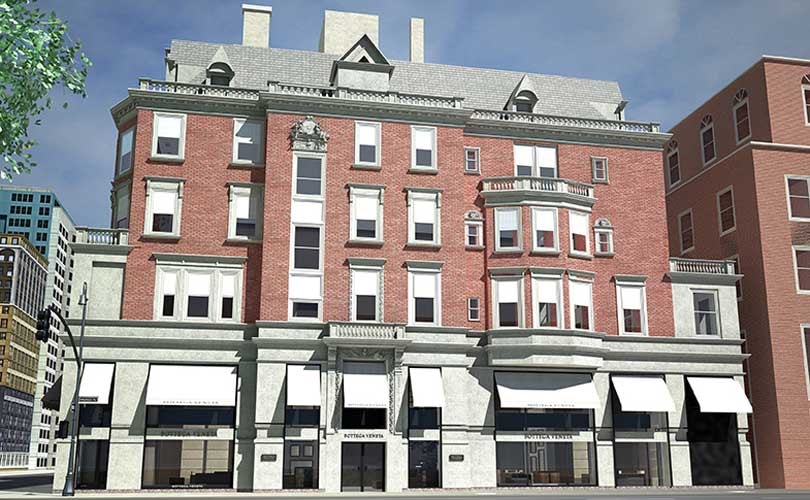 Bottega Veneta is continuing its global expansion, and the latest jewel in its plan forward is a new Maison on Manhattan's Upper East Side. Located at 740 Madison Avenue, the store features five floors with nearly 15,000 square feet. This makes it the biggest Bottega Veneta store in the world, showcasing the most extensive range of women’s and men’s ready-to-wear, handbags, small leather goods, luggage, eyewear, shoes, watches, fragrance, jewelry and the Home and Furniture collections.

The new Maison combines three landmarked 19th century townhouses that were originally private residences. While the store is large in size, it still provides a sense of intimacy. Above the soaring, double-height ground floor featuring women’s and men’s leather goods are a series of discreet, dedicated spaces. The mezzanine level houses a women’s shoe salon as well as fragrance; the second floor houses women’s ready-to-wear and accessories; and the third floor has the equivalent for men. On the fourth floor is a new concept called The Apartment, in which the Bottega Veneta Furniture Collection and Home Collection are displayed like a living space.

“It will be very much like a real apartment. For the whole store, I wanted to maintain the feeling of being in a private home,” said creative director Tomas Maier. The Apartment will feature exclusive furniture pieces in unique materials and color combinations.

Similar to the Maison flagships in Milan, opened in 2013, and Beverly Hills, opened in 2016, the design of the New York Maison was conceived by Maier and its interior design is a reflection of its respective city. Maier drew inspiration primarily from Manhattan’s iconic skyscrapers. Metallic elements such as brushed brass ceilings and metal display cubes with custom finishes echo are inspired by the city's building and skyline. The palette of each floor is customized. The ground floor reflects the cool grey and beige shades of Manhattan streets; the washed greens of the Apartment reference the ocean surrounding the city. The Maison will be illuminated predominantly by daylight—a rarity in Manhattan stores. “The store reflects the love and admiration I have for this city and its architecture,” said Maier.

Bottega Veneta has a rich history in Manhattan. The brand was one of the first Italian luxury brands to open a store outside of Italy back in 1972. The brand will be marking this historic moment by showing their fall/winter 2018 collection at New York Fashion week next week. In honor of their one time at NYFW, Maier also designed a 33-piece capsule collection of leather goods for both men and women called “Icons of New York,” which pays homage to quintessential motifs of the city, to be launched exclusively at the Maison.

Among the women’s styles are the Intrecciato NY Chain Knot embroidered in silvery Lurex thread with a graphic skyline that, on closer look, is made up of tiny block letters spelling out “New York.” Another take on the unmistakable Manhattan vista, the Intrecciato Midnight Cesta shopper has a discreet tone-on-tone embroidery of shadowy skyscrapers. While the city’s architecture is a perennial inspiration for Maier, he also explored the city’s quirkier elements in a Veneta hobo bag quilted with pop symbols of both New York and Bottega Veneta called the Intrecciato Boutis NY. The designer also drew inspiration from the colorful map of the New York City Subway. “Anyone who likes graphic design will immediately recognize it,” he said. The Intrecciato Tube Olimpia bag is made with a molded padding to raise the map’s tubes into relief. The Intrecciato Stops Loop shows the various routes traced in inlaid leather with brunito studs marking the stops. All four workmanships are also available in Biletto Chain mini bags and phone cases.

The men’s styles reference the city’s skyline as well as its geography. The Intrecciato North-East workmanship, available on the Brick backpack and Citydoc document case, portrays the soaring buildings in subtle embroidery as if drawn by a charcoal pencil. The Intrecciato Prospect combines laser and embroidery work to create a 3-D effect that has the look of the cityscape as interpreted in a graphic novel. It comes on a Brick backpack and Tote. Another style, the Intrecciato Manhattan Craquelé, takes cues from the city’s grid of streets. It utilizes inlay leather work that’s precisely cut and pieced together by hand to recreate an abstract map of Manhattan on the Tote and Citydoc. The effect is so discreet, says Maier, “at first you almost don’t see it.” The Intrecciato Boutis NY quilting is also used on the Double Brick backpack.

“New York is one of the few cities that speaks to the rest of the world,” said CEO Claus-Dietrich Lahrs. “For this reason, we believe it’s an important investment and statement in terms of size and visibility.”

While the project was a long time in the making, Maier is pleased with the fruits of his labor. "The process has taken many years,” he said. “But I think it was worth spending that time to achieve something on this scale. This store is my gift to our East coast clientele.”